Tuesday on the Moon!

You know what they say about "best laid plans"......we'd planned on spending a few days exploring the Crater's of the Moon National Monument and perhaps play a round of golf here at the Jerome Elks Lodge.    The Jeep purchase in Provo retarded our plans and a broken diamond ring caused our day at Crater's to start even later than scheduled.

Late last week I was getting ready to go (somewhere) and as I put my ring on I heard a snap and a tinkle.....the snap was the side setting breaking and the tinkle was the sound of three small pave diamonds hitting Beluga's floor.    Luckily I heard the tinkle and dropped to my knees to search for them.    I was able to pick them up and quickly called our jeweler.   He sent an insured FedEx label so I could return the ring and errant stones to him for repair.     So, before we packed up our lunch and headed north to Crater's of the Moon, we had to find an authorized FedEx shipper and get that ring on its way to Rochester, I feel absolutely naked without it!

The area around Twin Falls is pretty, I wish we had more time to check it out.  We did stop at a "scenic viewpoint" and were rewarded with a beautiful look at the Snake River below the I B Perinne bridge over route 93. 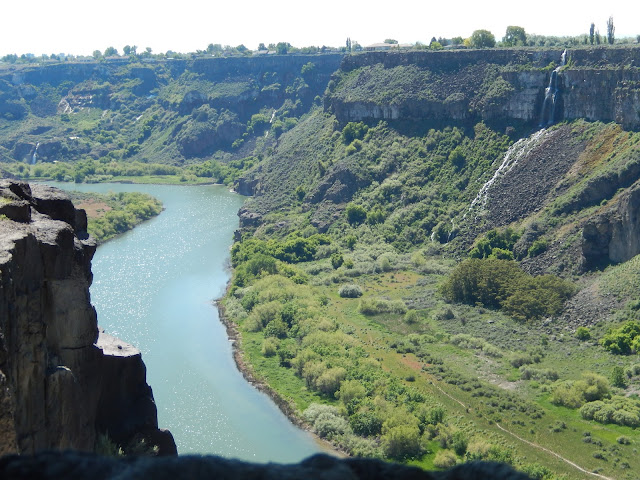 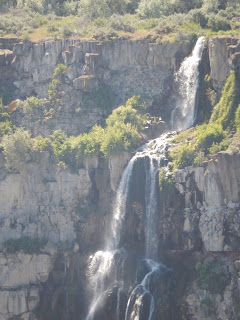 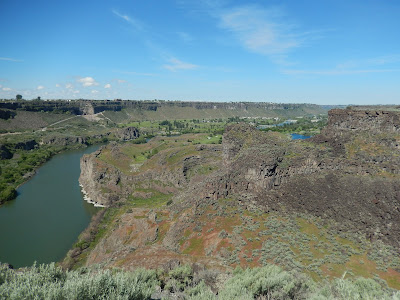 By the time we were done it was almost noon....not the way I'd planned our day.  Also, I didn't figure how far our destination actually was from Jerome.   I didn't think it was very far, but it turned out to be a distance of about 80 miles one way.

We stopped at a Wildlife Refuge along our route to eat our lunch and watch the birds.   It was pleasant and on the way.


Once at Crater's of the Moon, we made a quick stop at the visitor's center, watched a short movie, decided what we could see within our allotted time and set off on the 7 mile scenic loop road thorough the park.

We had a wonderful time and were so sorry we couldn't spend more time.   We've been to Lava flows in Hawaii and scrambled around the lava fields near Sister's Oregon so we expected to have a similar experience.    While Hawaii's were, of course, still living and breathing this Monument's relatively recent lava beds were extremely interesting to us.   The most recent additions were only 2000 years old.   In the scheme of the earth, mere babes.

Here are some random pictures, it was a cloudy and gray day so I'm not happy with any of my pictures.   The reality was sooooo much more impressive.   You'll have to see for yourselves. 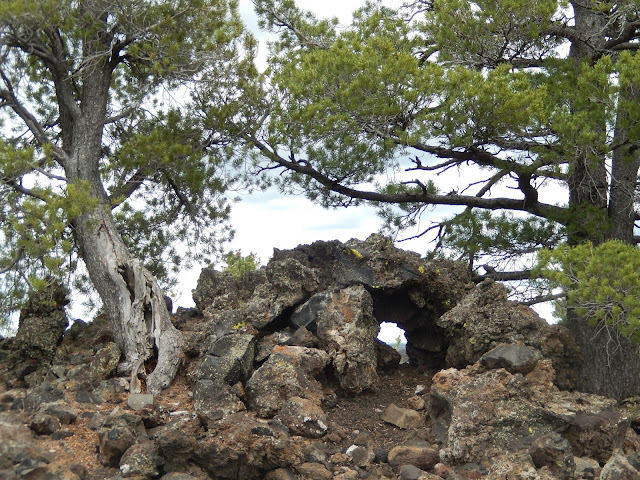 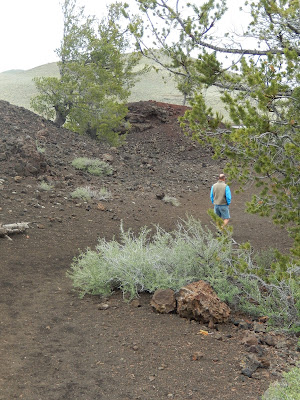 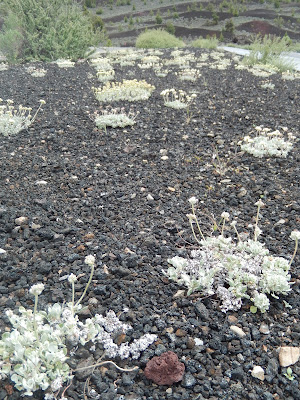 These tiny and perfectly spaced plants are dwarf buckwheat.   Their roots can spread out 4 feet to gather water in this harsh landscape and their white leaves reflect the sizzling summer sunshine. 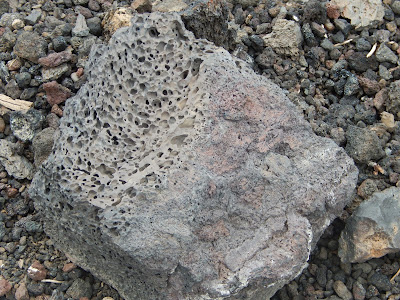 Pretty much everything we saw was some variation of gray.   It was that kind of day. 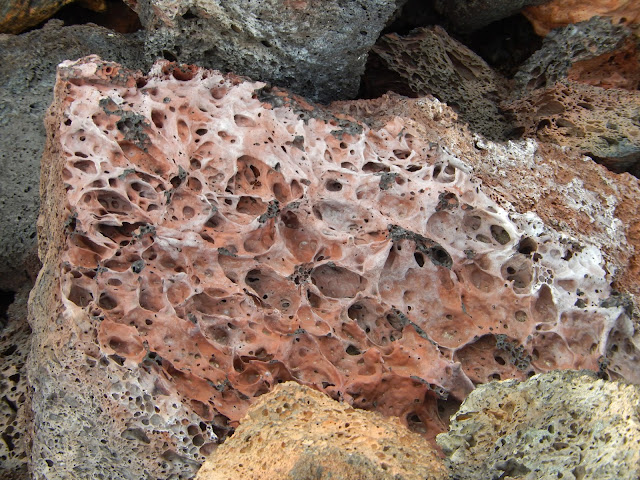 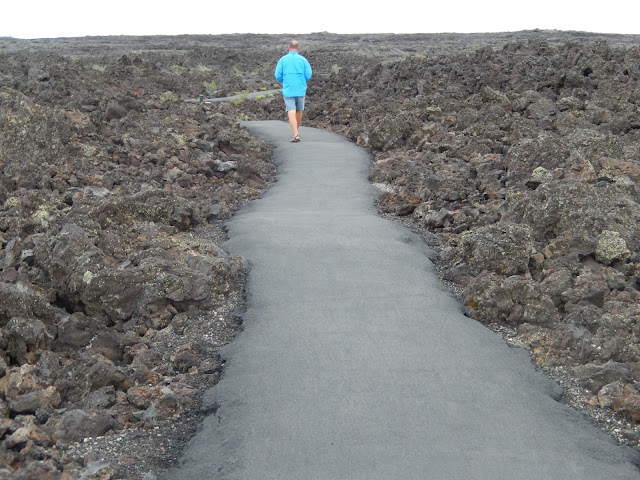 To enter any of the lava tubes or caves one has to have a permit.   They are free but necessary to try and stop the spread of white nose disease that is running rampant among bat populations.      In all caves but the Indian Tunnel, flashlights are required as they are pitch black, often with icy or wet floors.    This cave had two "sky lights" in its roof so extra light is not required for entry and exploration.
A good thing and a bad thing.   It was almost impossible for me to get a decent photo inside because of the very dark areas and the very very bright spots caused by the sky lights.    My little point and shoot couldn't decide where to focus so threw its hands up in frustration......


We had the National Monument to ourselves today.   Perhaps because it was a Monday, perhaps because it looked like rain all day.    For whatever reason, we enjoyed our solitude in this otherworldly landscape.    Only when we came up out of the Indian Tunnel lava tube, heading back to the Jeep,  did we see a huge group of school children approaching us.    Our experience there would have been entirely different if we had to share it with 30 or 40 other people.    Timing is everything! 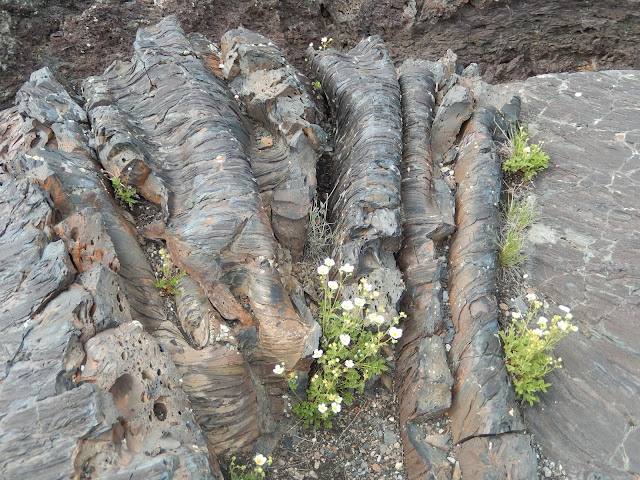 Sasha and Lewis have enjoyed their time here.  Sasha's only challenge was getting over the landscape timbers to reach the grass for her walks.   She did a yeoman's job by the way. 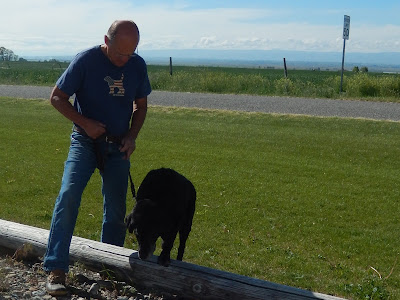 Lewis enjoyed playing ball below the driving range when he could talk someone into throwing it for him. And in the evening he found a great seat to watch television and keep an eye on what was going on at the Lodge. 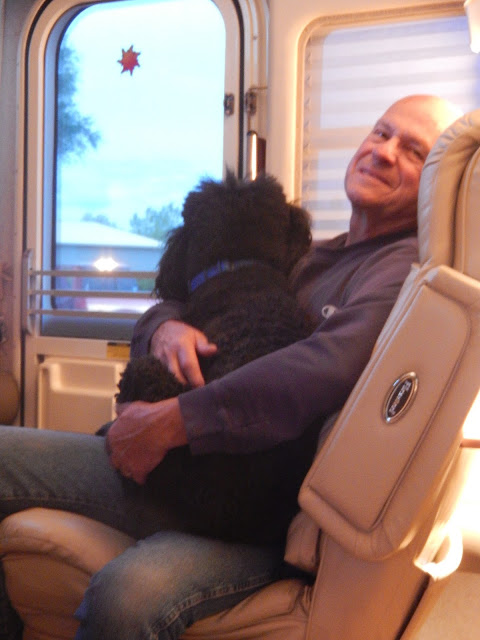 Tomorrow we pack up and continue our westward progress.