The 4th of July is sort of anti-climactic here, almost a non-event.   People who live near Conesus Lake really pull out all the stops on the 3rd of July.   That's the night that most folks living on the shores of the lake forget that fireworks are illegal in New York State.   It seems everyone is trying to outdo their neighbor for the biggest, loudest and longest display.  Its a wonderful night to have a party because at about 9 p.m. the free (to us that is) entertainment starts.    Fireworks begin, lots of people have big bonfires and at 10 p.m., sharp, everyone lights red flares all across the lakeside of their property giving the celebration its name - Ring of Fire.

When Jesse was  just a little guy it was hard to explain to him why everyone was shooting off firecrackers and more when the practice was illegal.   He wanted to know why the sheriff's boats were patrolling the lake but not arresting anyone.    Should we call them and tell them, didn't they see and hear what was happening?   He wanted answers and we had none.   Fortunately he was easily distracted by s'mores.....

In the past we've always had big parties on the 3rd but this year, since we had squatters on our land, we stayed very low key.   Just us, them and Geneva and Walter.   No fancy food, no tubs of wine and beer, no decorations.    We had fun anyhow and the next time we're here on the 3rd, we'll resume the celebration as usual.   Perhaps the squatters will return then.

So, as I said, people are very competitive on the 3rd.  Dave is no different, except his creative expressions aren't in the line of fireworks.   He is all about the bonfire.


He doesn't want me to show you his efforts this year, he says he was real tired and only was able to scavenge a small amount of wood.

Mr. John, our resident work camper, offered to help and Dave had no idea of this man's strength.
They both unloaded the trailer by tossing the branches and stumps over the fence to the lake level grass.    Mr. John is freakishly strong and managed to overshoot and toss one right into the water.
Luckily he had his swim suit with him so he was dispatched to retrieve it before a boat strike occurred.


It started to rain, but the two men kept working on the build.    When it was done, they covered it and continued their work elsewhere. 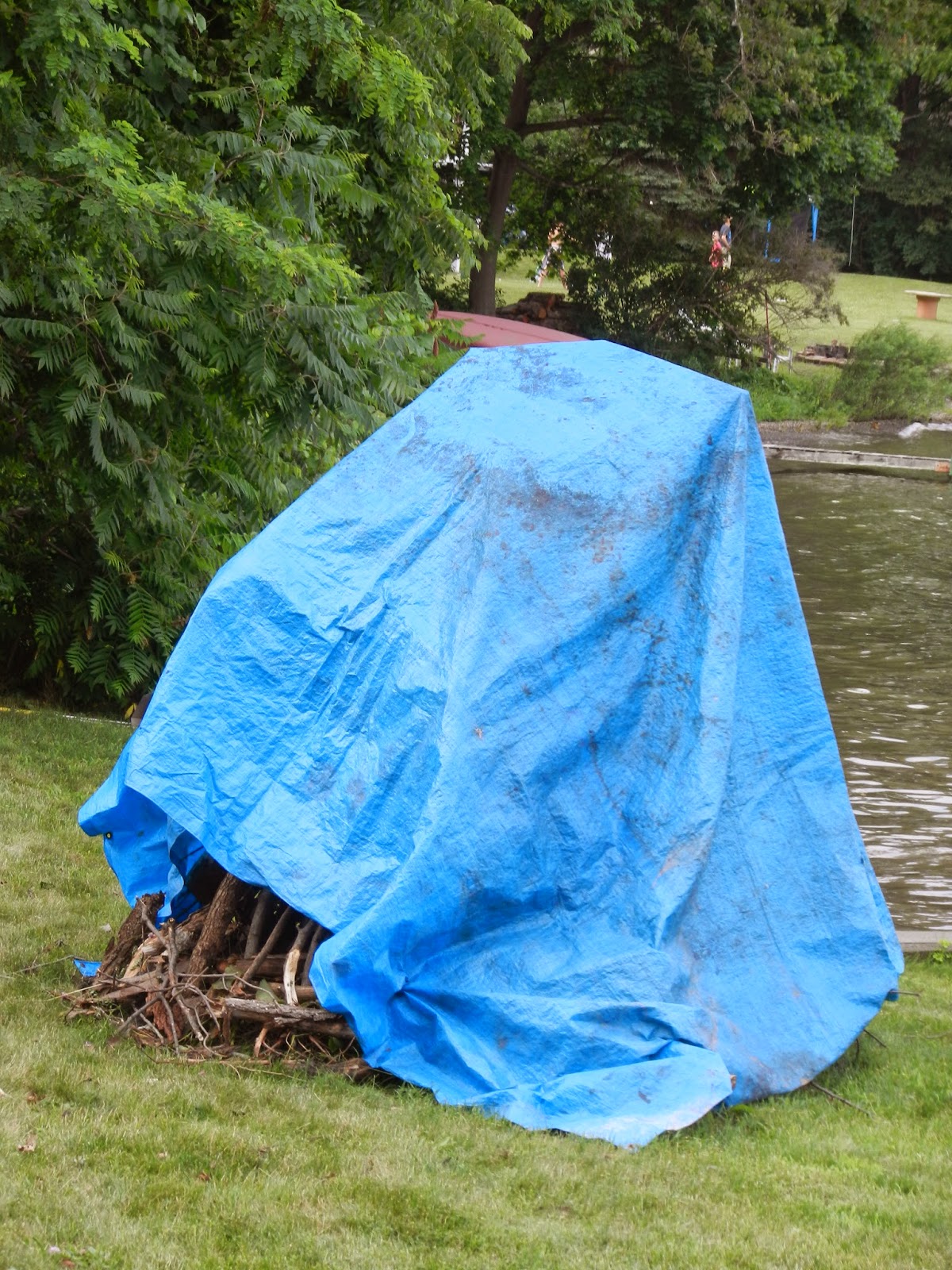 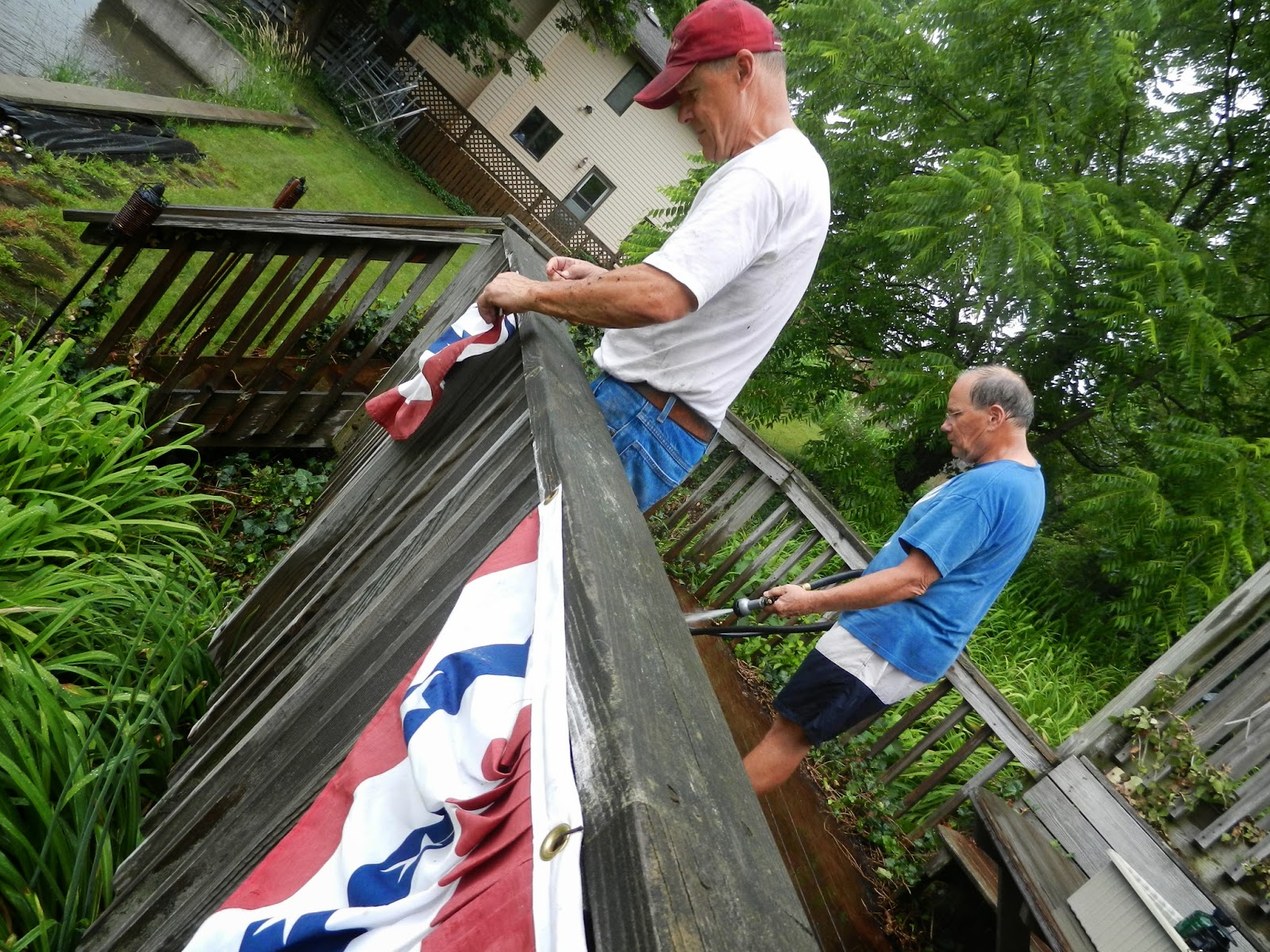 Fire built, deck rinsed and swept, buntings hung, we decided to head back to the farm for some dinner.    The workampers needed a little down time, Mr. John was becoming a bit giddy from all the work.

After dinner we rejoined the work crew, recently showered and much calmer,  and the fire was uncovered.   We were open for business. 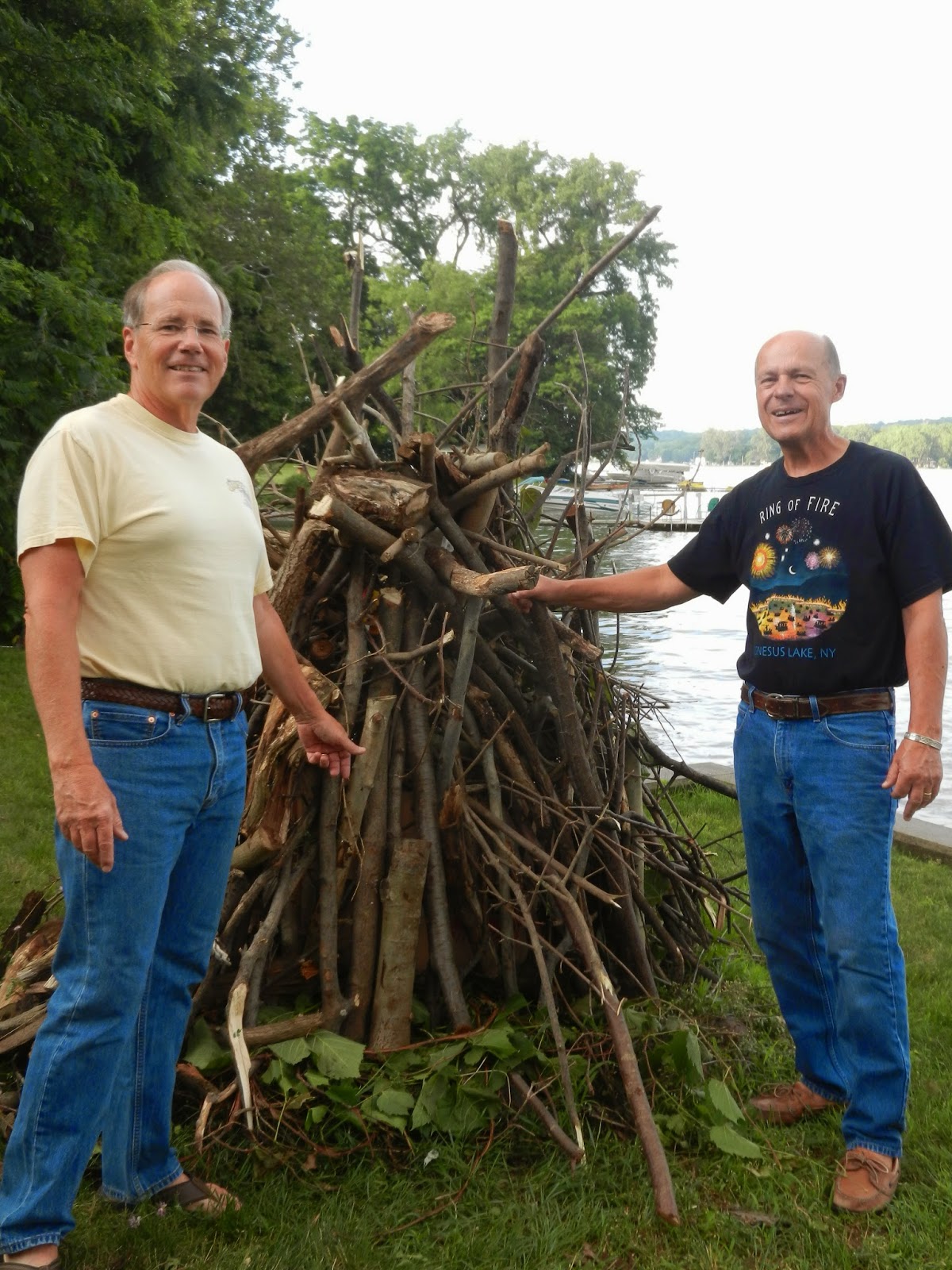 You'll note that the fire lighting is taking place in broad daylight.   Dave can never wait for dark to torch his masterpiece, so we all gather around him patiently clucking about what a beautiful shape it is, how nicely its burning, how HOT it is, how we can't really get too near it lest our sandals melt, etc.   Fortunately he tends it lovingly and it stays bright and hot until well after midnight.

I've never been able to get my camera to take a picture of fireworks, but this night I had a little success so, here they are! 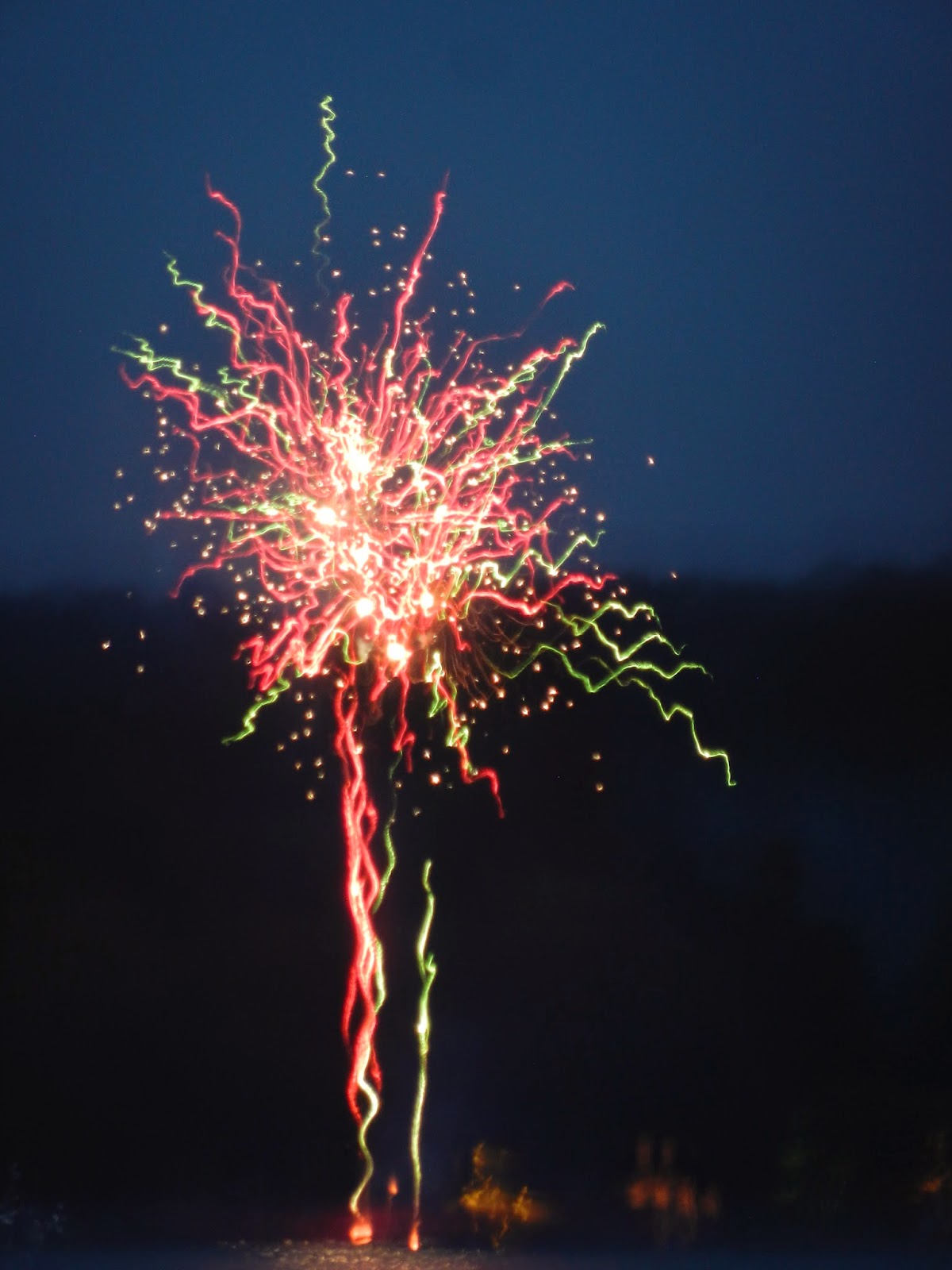 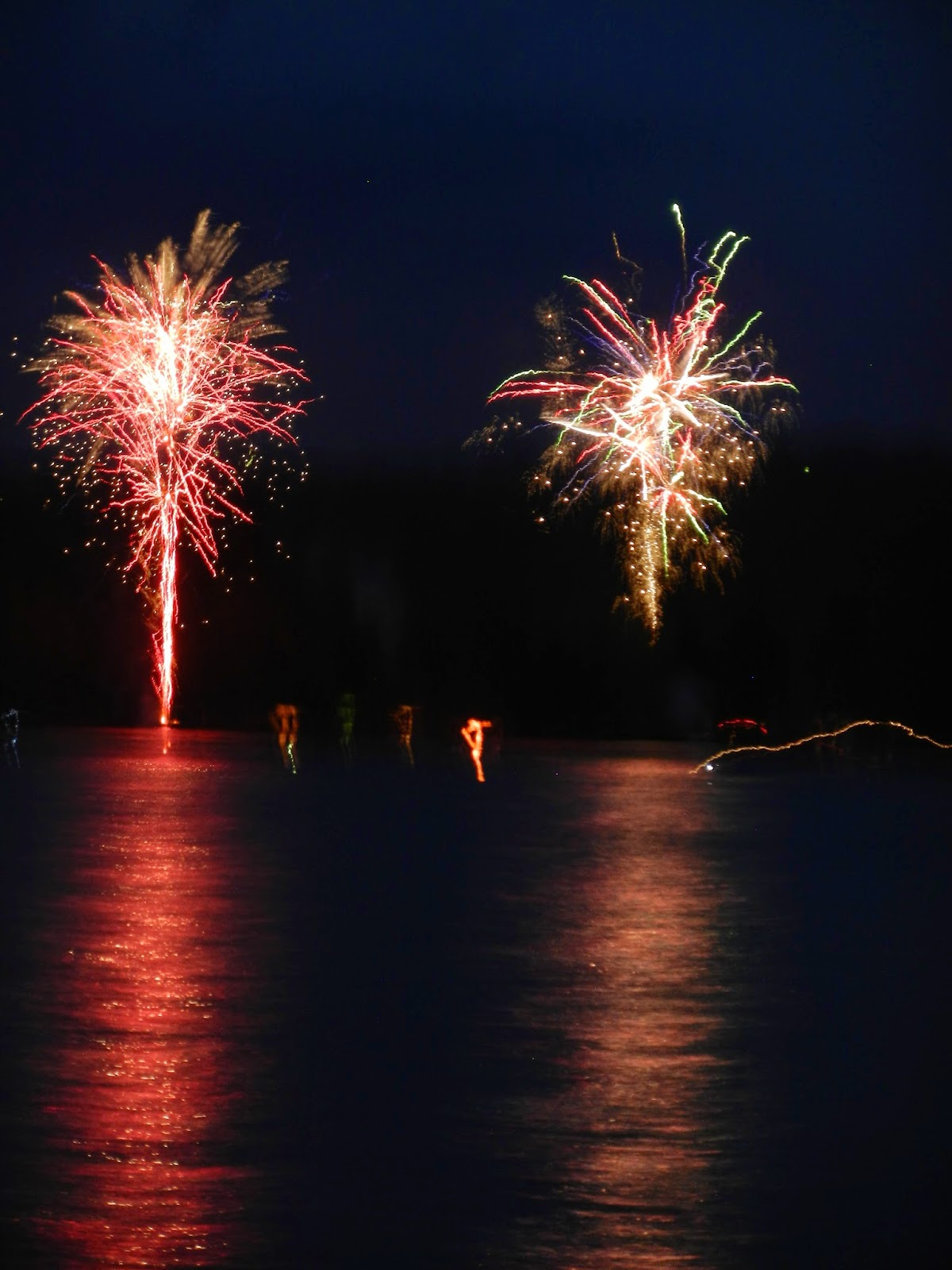 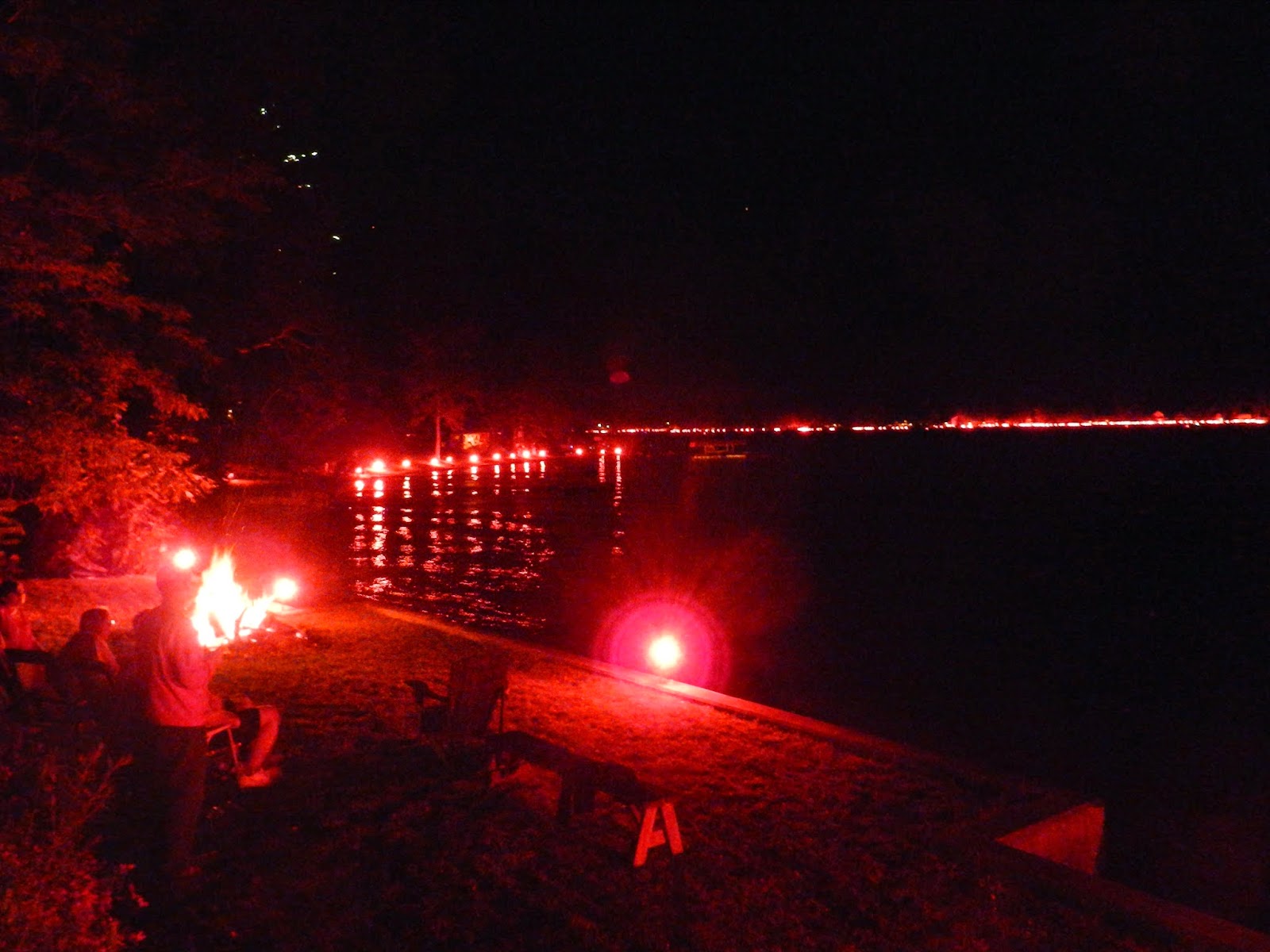 At 10 p.m. the flares began to ring the lake.  Without our docks out in the lake, we couldn't see much to the north and south, but the total effect is really beautiful.


We had a lovely time and didn't get back home until near 1 a.m., a real stretch for us old folks.  By the way, in case you're wondering how Sasha made out with all these booming, flashing demons in the sky, she didn't hear a thing.    We've recently realized that she's as deaf as a post so at last she had a peaceful 3rd of July!

Pam invited us over the next day for a 4th of July cookout and farewell dinner.   We're really going to miss their company and Pam's delicious meals.   They've been a lifesaver for us and we haven't laughed so much in a long time.    Thanks again guys, it was great. 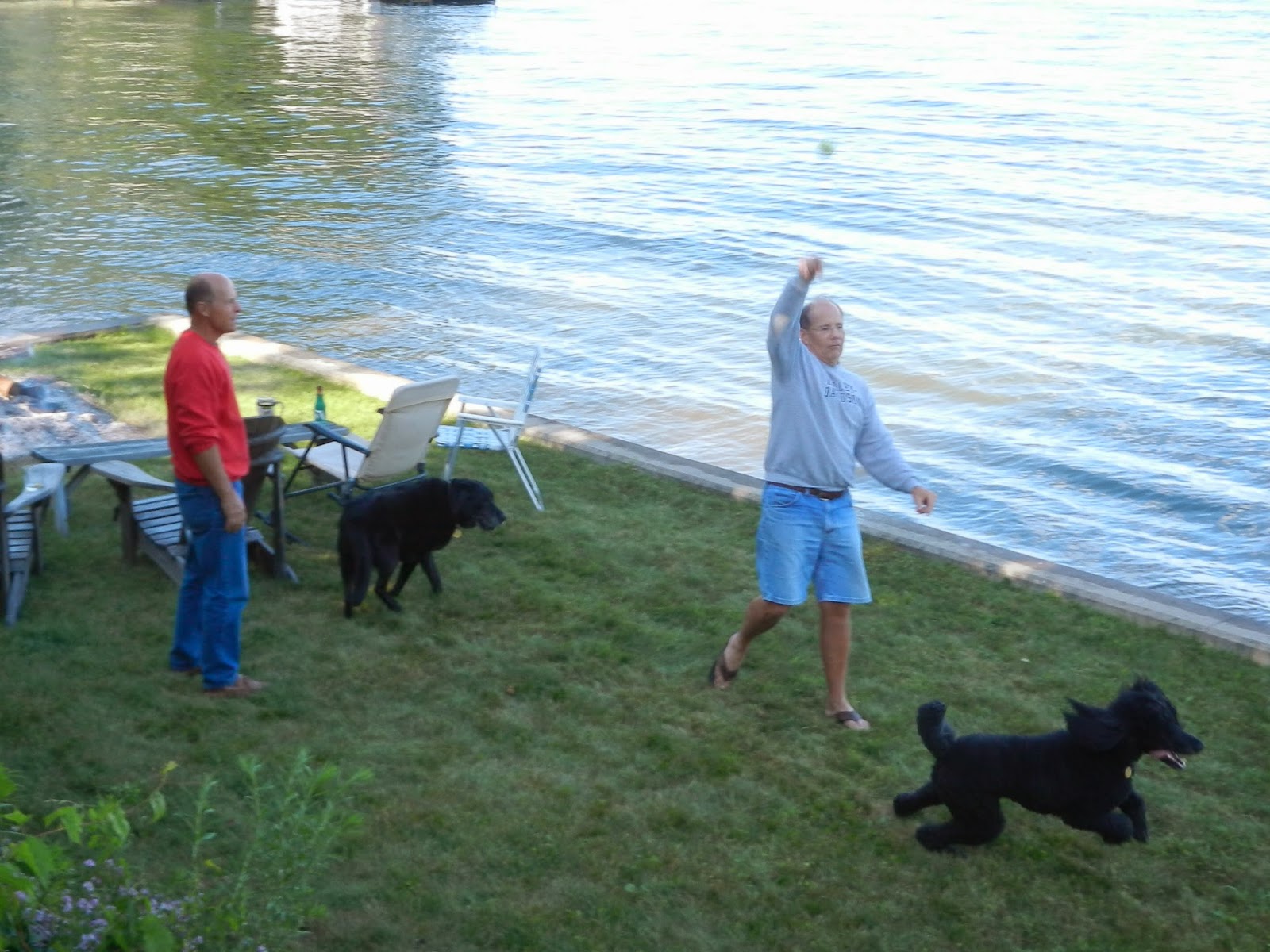 We managed to resurrect the embers of last night's bonfire since it was a chilly 4th.  It was nice sitting in front of it, sharing the warmth.    Lewis and Sasha will miss Gramma Pamma and her man too.     John plays ball with Lewis and he throws that tennis ball in the most interesting places. 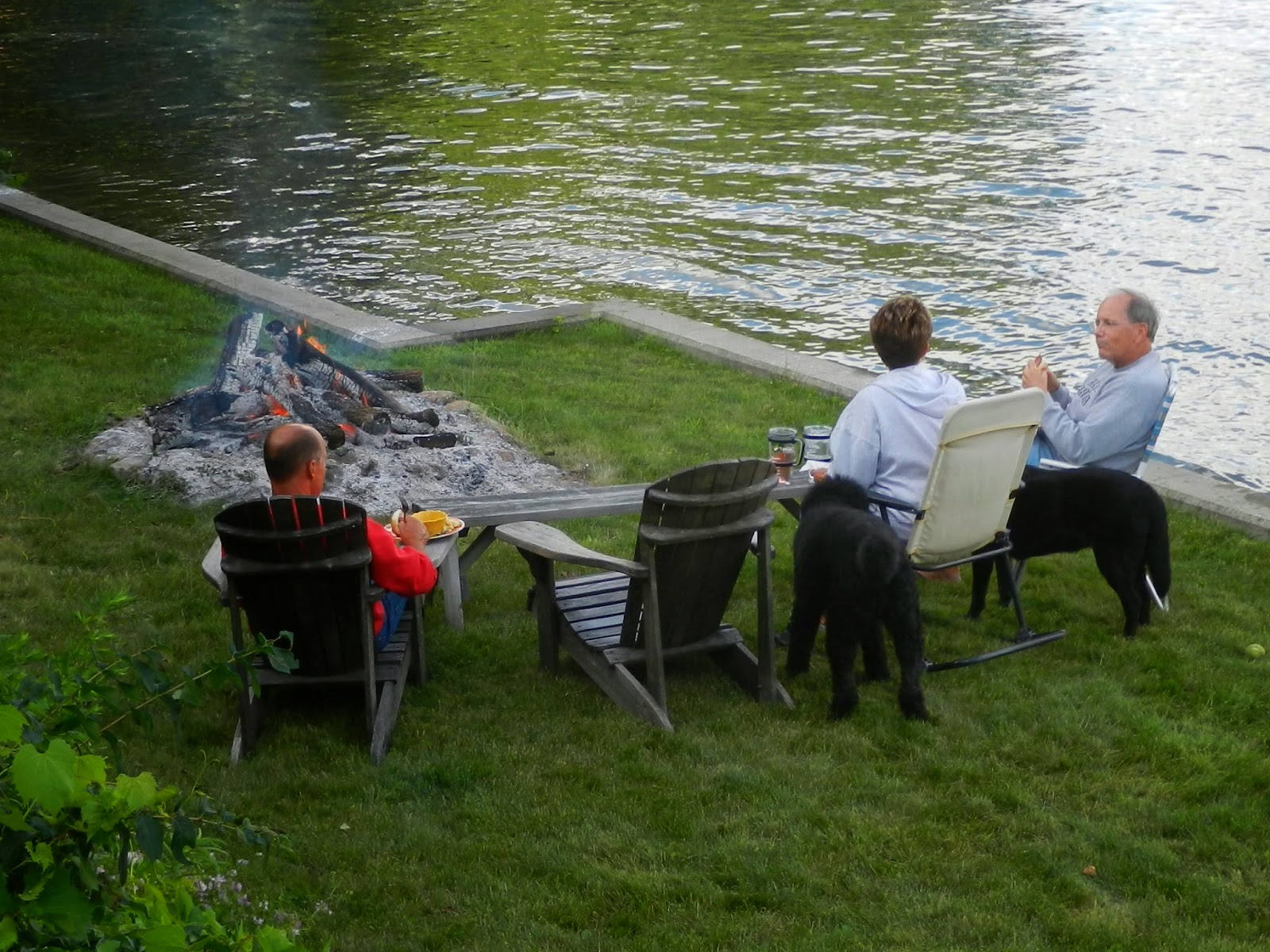 I think you can see what Lew and Sash will miss about Pam.....Cookies in each pocket keep them very very interested.    They'll have to go to boot camp for some remedial training now.


We decided that, since Pam and John had gotten the lake site all warmed up, we might as well move Beluga down there until the bulldozers chase us out.   This was my morning's view, not bad eh? 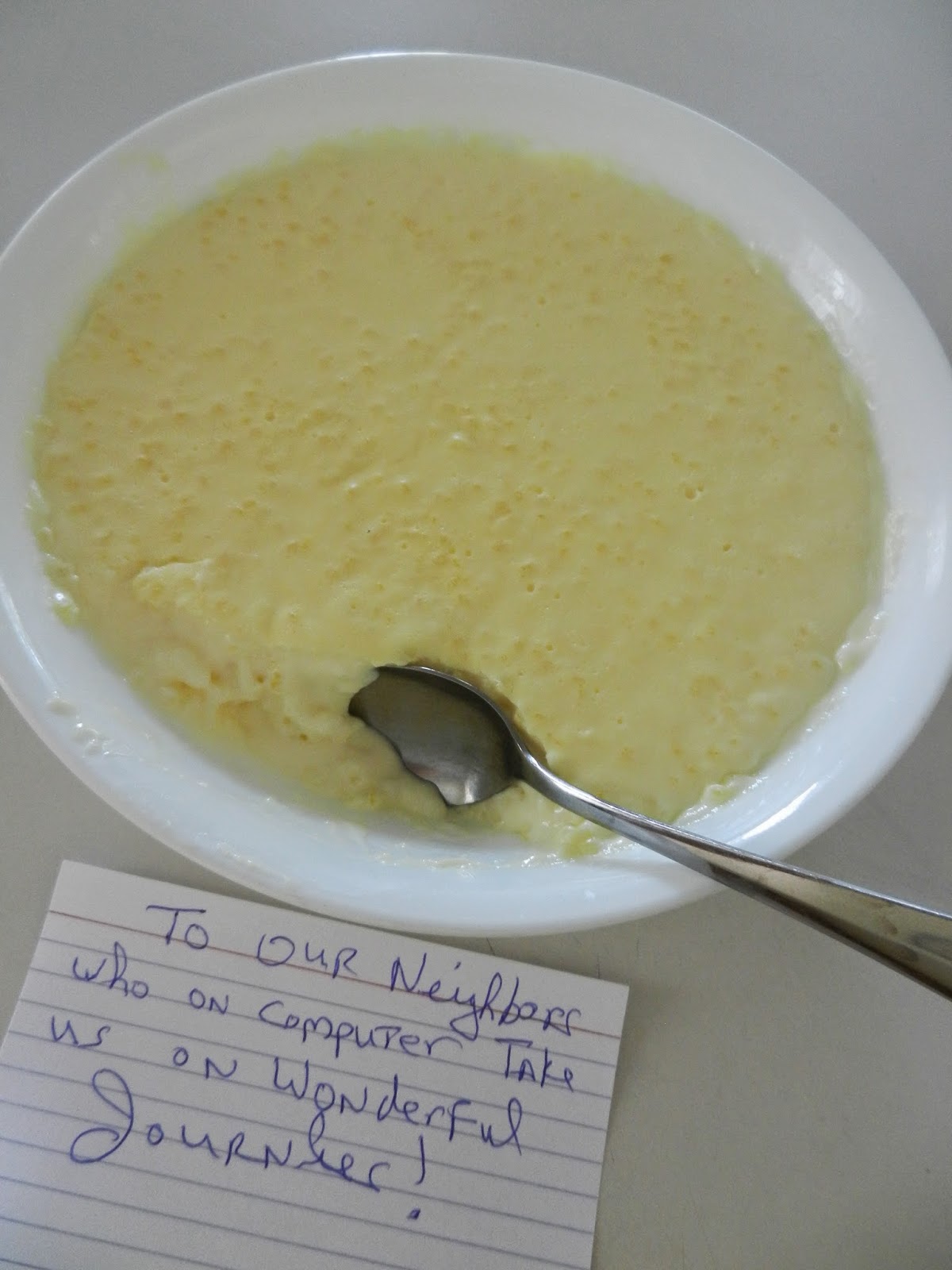 P.S. Sorry Fred, we couldn't wait til after dinner to taste your wonderful, homemade tapioca pudding.    Mmmmm  Thanks again!
Posted by Suzi at 4:06 PM