We arrived yesterday afternoon, did a bit of grocery shopping and just settled ourselves down into our friend's house.   The Kraft's won't be using the house until sometime in January so they were gracious enough to let us have it all to ourselves til then.    We were more tired than we thought after the days of driving so last night it was early to bed.  I went right to sleep, but Dave was able to keep his eyes open long enough to watch the  Oregon Ducks game (go ducks!)

We took it easy today, second cup outside in the warm sunshine.   We relaxed while Lewis kept a shrewd eye on our morning visitors. 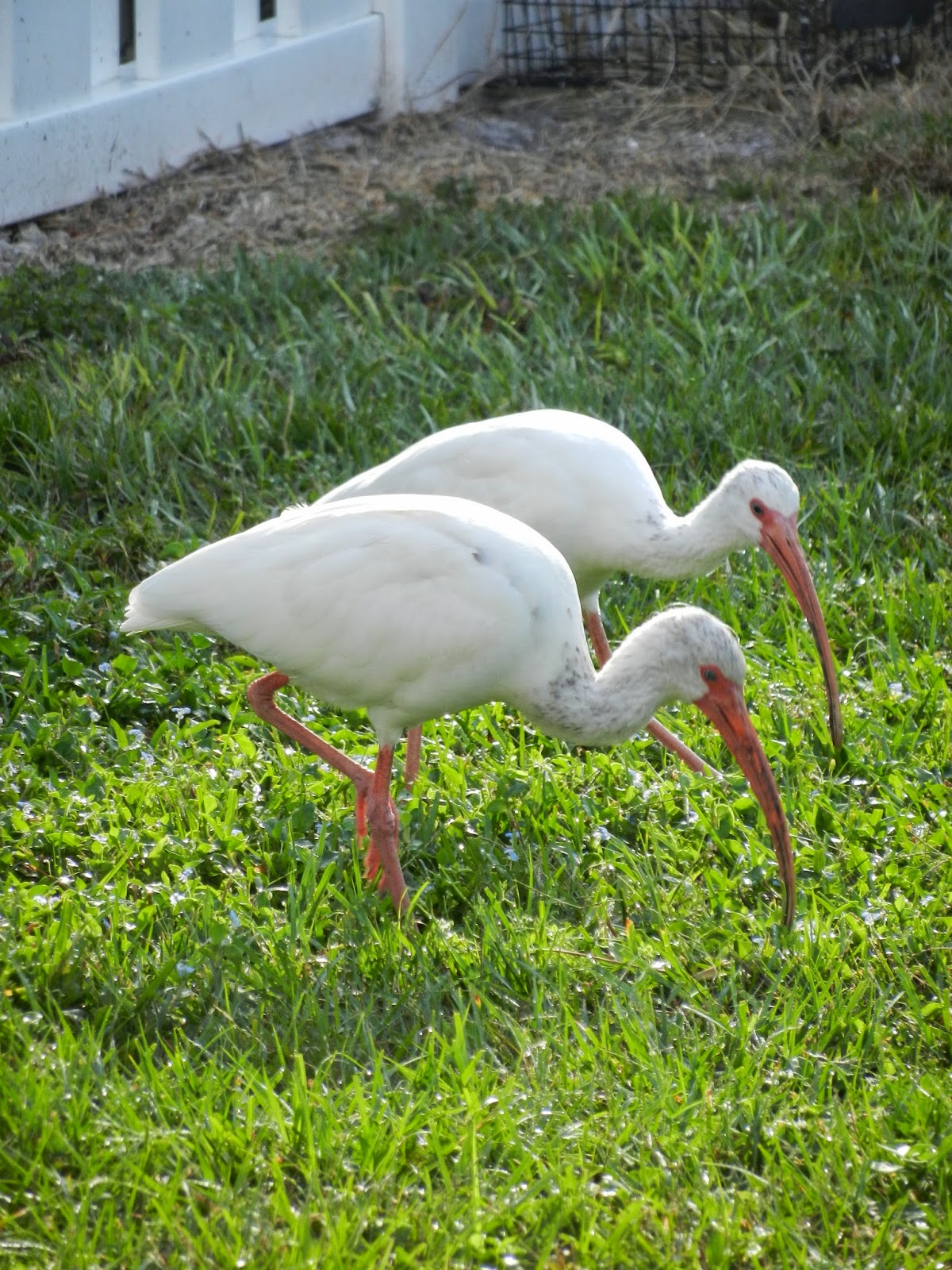 These two marched around the backyard seemingly oblivious to us watching them.   That is until Lewis and Sasha stirred from their spot in the shade.   The Ibis flew up to the power lines over our heads and squawked their displeasure. 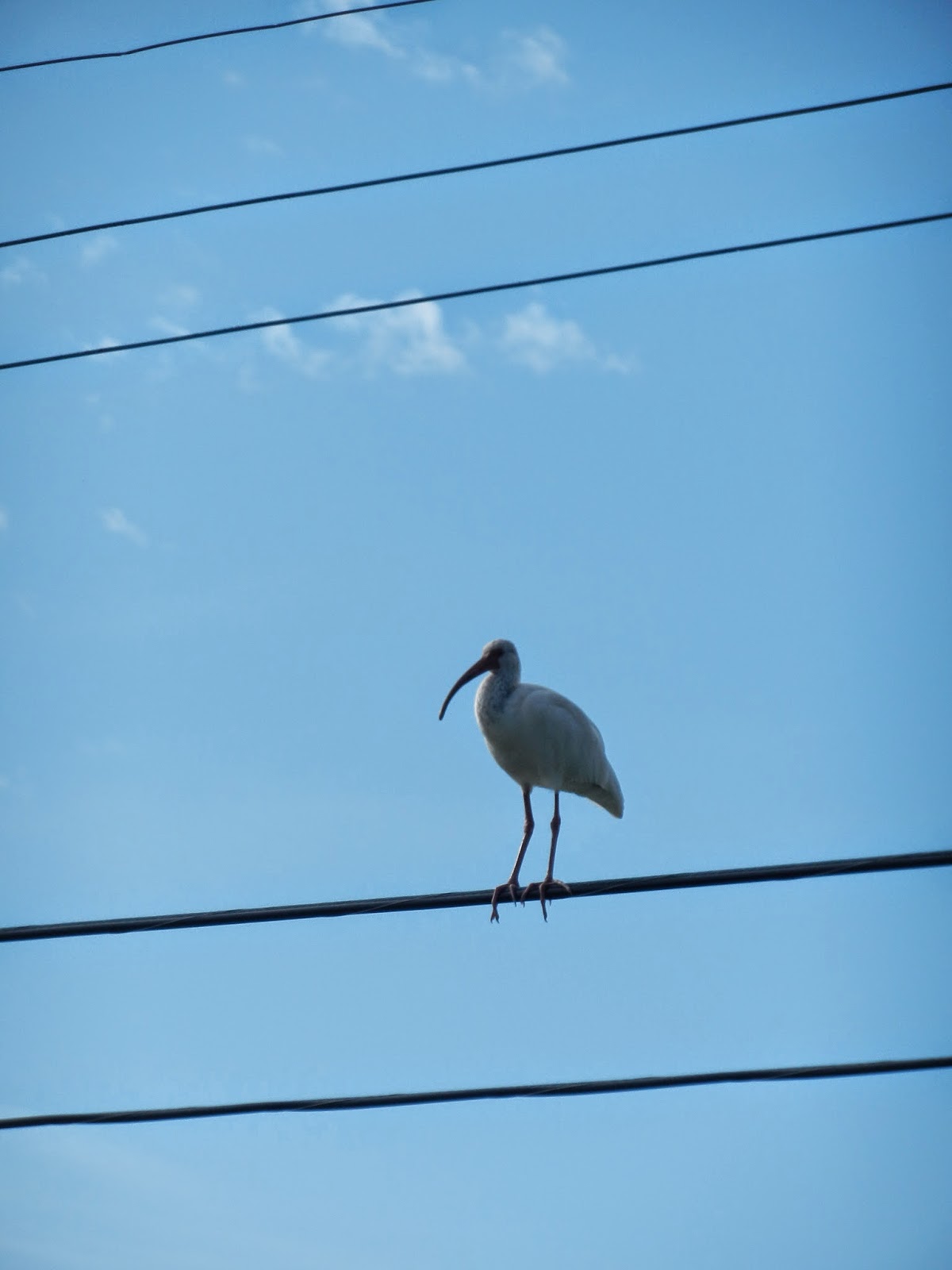 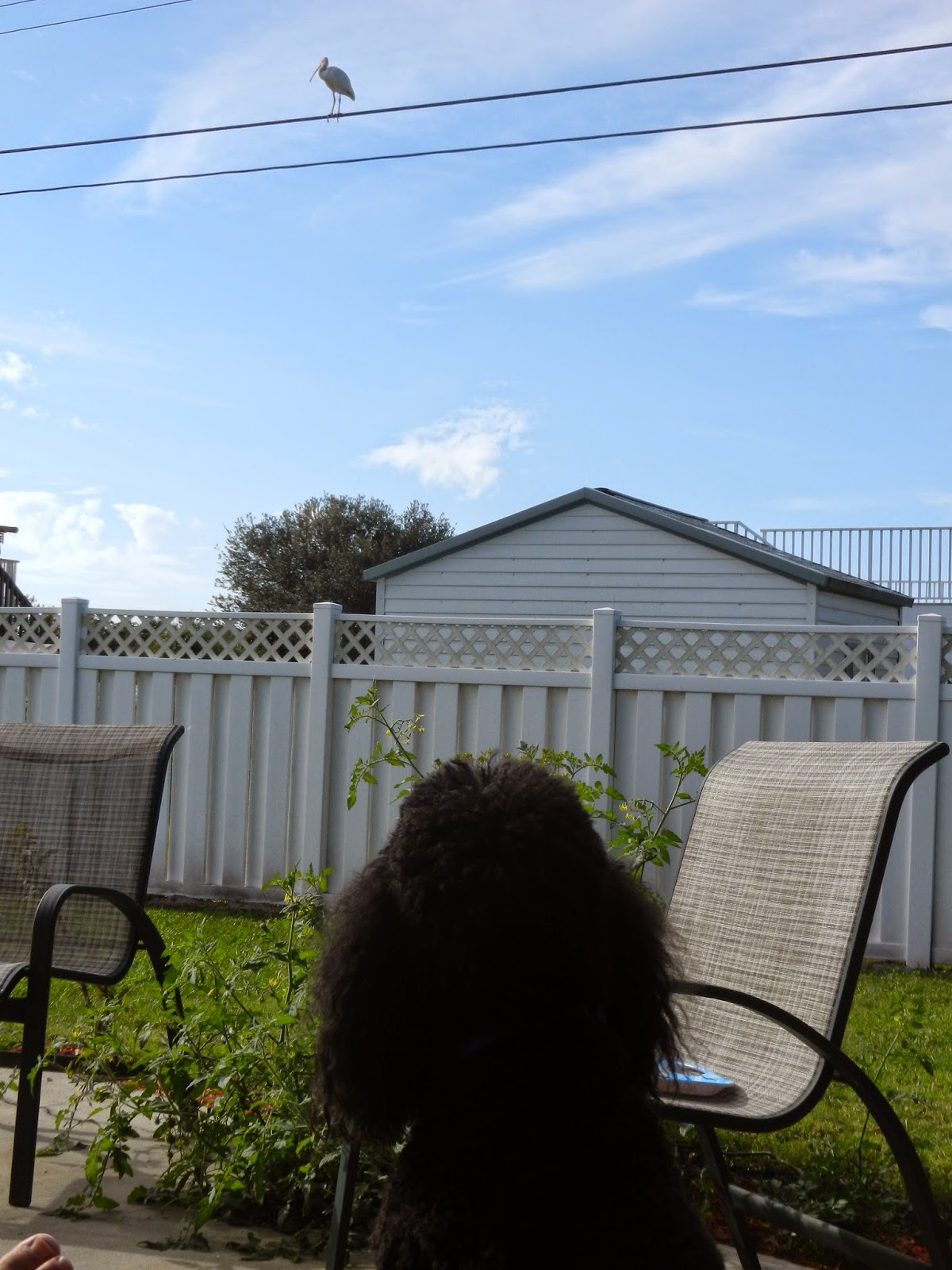 We sipped our second cup and ate our morning treat while Lewis kept watch.    I don't know what those Ibis were saying, but Lew didn't like it.   He finally got up and ran barking at the fence.   The birds took off and he pranced back quite proud of himself and expecting kudos for a job well done.......He's a real bird dog, that boy is!

Not much happened here for the rest of the day.    Around 5 Dave and I headed for "downtown" Venice to see if we could get a spot by the water to watch the annual Venice Boat Parade.   We'd seen one in Sarasota last year and were looking forward to seeing how the two would differ.

We were a bit late and had trouble finding a spot in most of the places we looked.   Finally my skillful driver found the tiniest little space on a steep hill next to a tree that he managed to shoehorn the jeep into.   Perfect.     We walked under the Circus bridge and along the Inland Waterway, all ready teeming with thousands of others.   Kids were running and playing, some people sat quietly in small groups, some had set up compounds with candles and lanterns, fire pits, tables outfitted with all manner of goodies, one even had a make shift port a potty set up!     Adults and kids alike wore santa hats, and elf hats, and reindeer antlers.....big and little dogs sported flashing collars and leashes, the sounds of jumbled up christmas carols everywhere.   What a fun and festive place this was!   I'm so glad we went tonight.

The number and quality of boats was just astounding, a really fantastic turnout and a huge and very enthusiastic crowd to cheer them on.   I don't have much success in photographing things at night much less moving things at night, but here are a few of the boats we watched.... 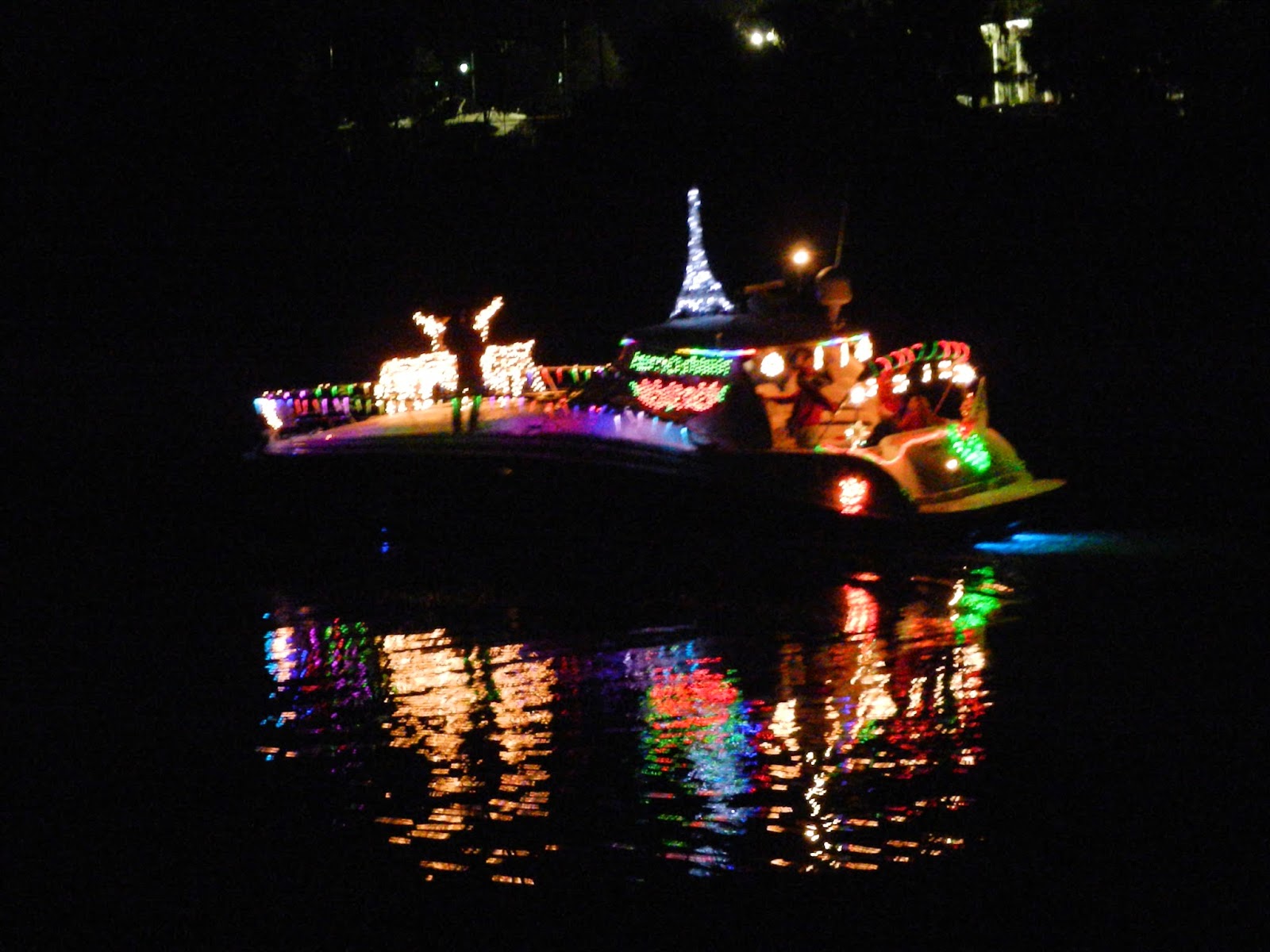 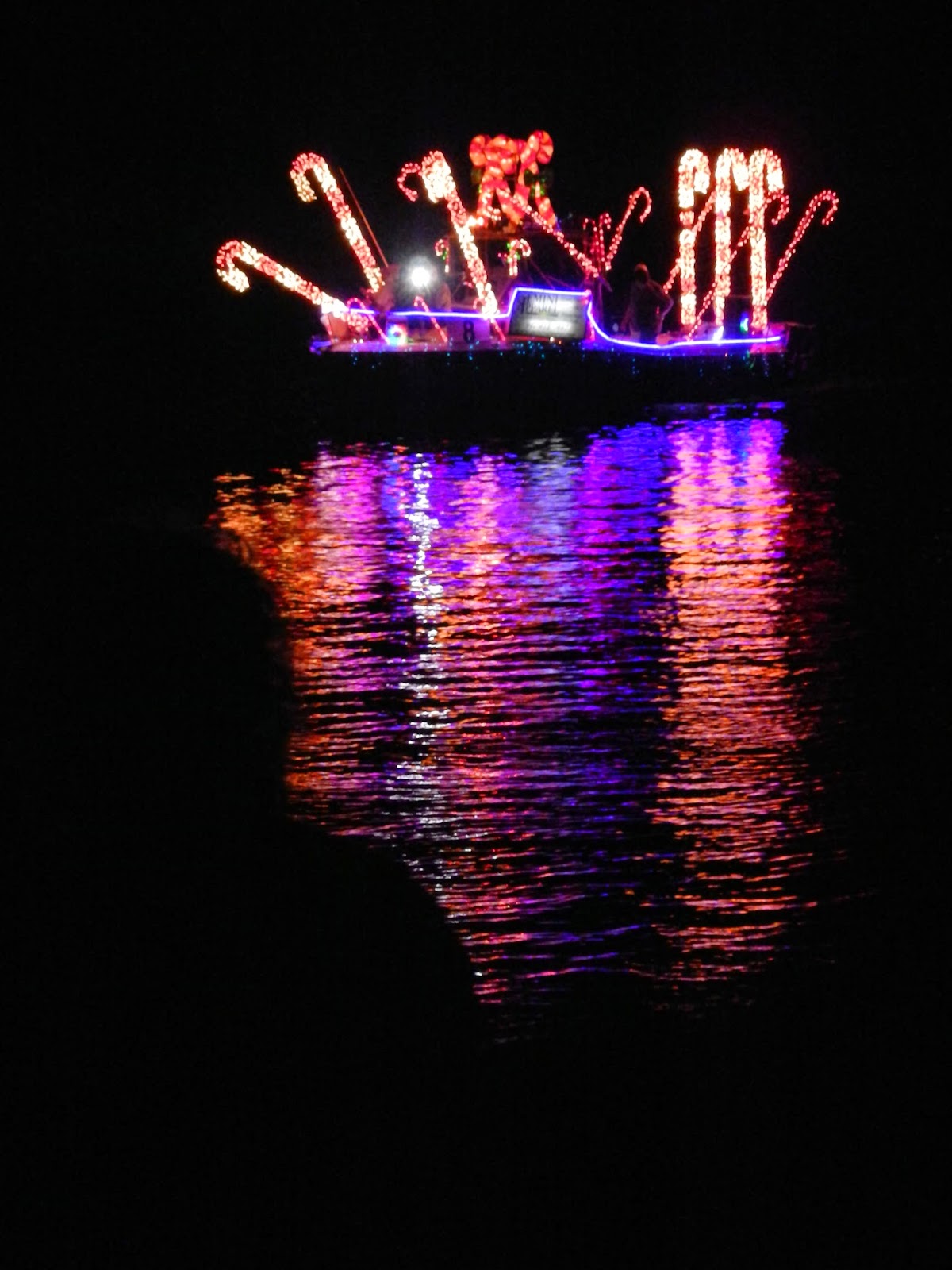 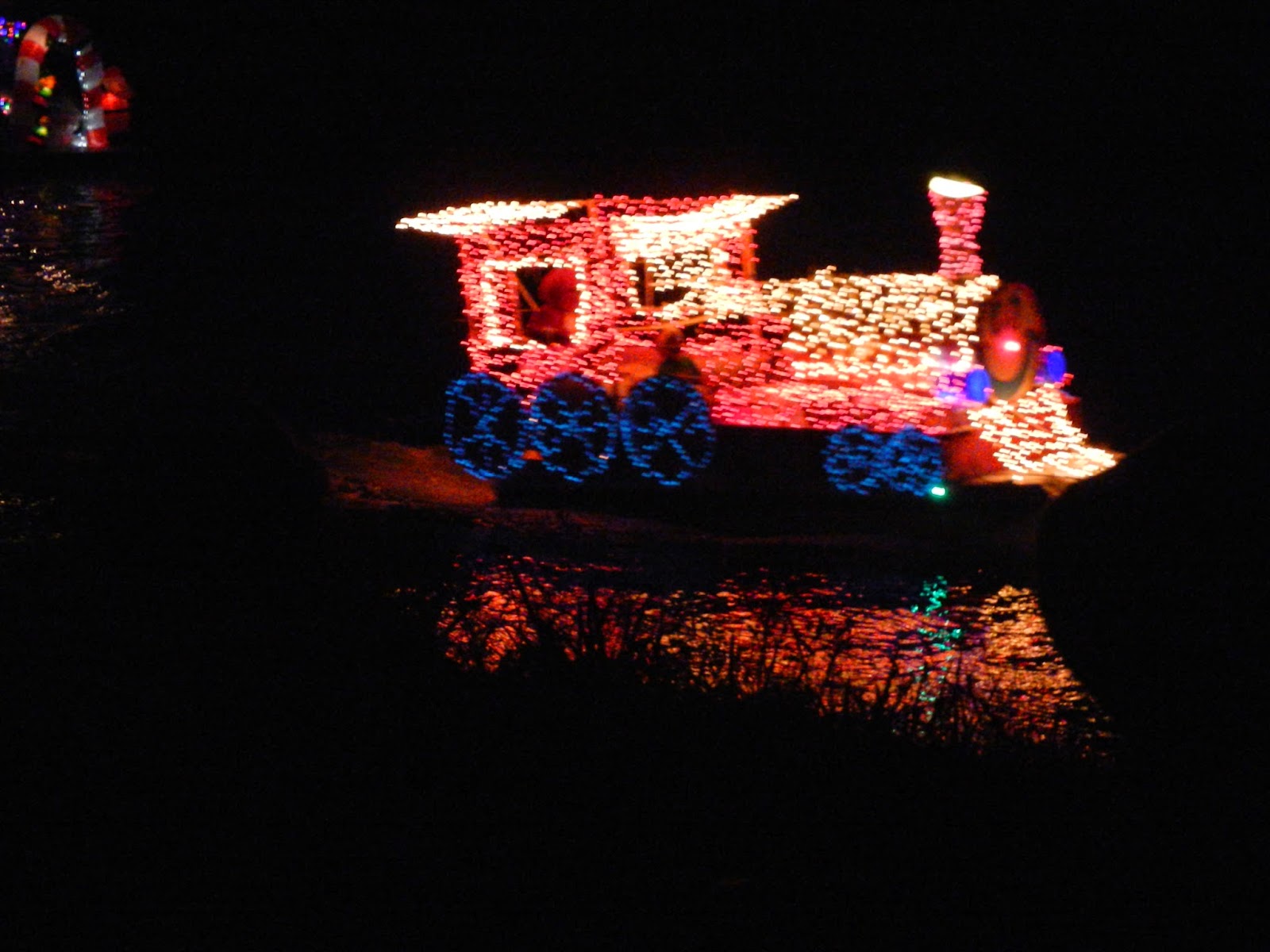 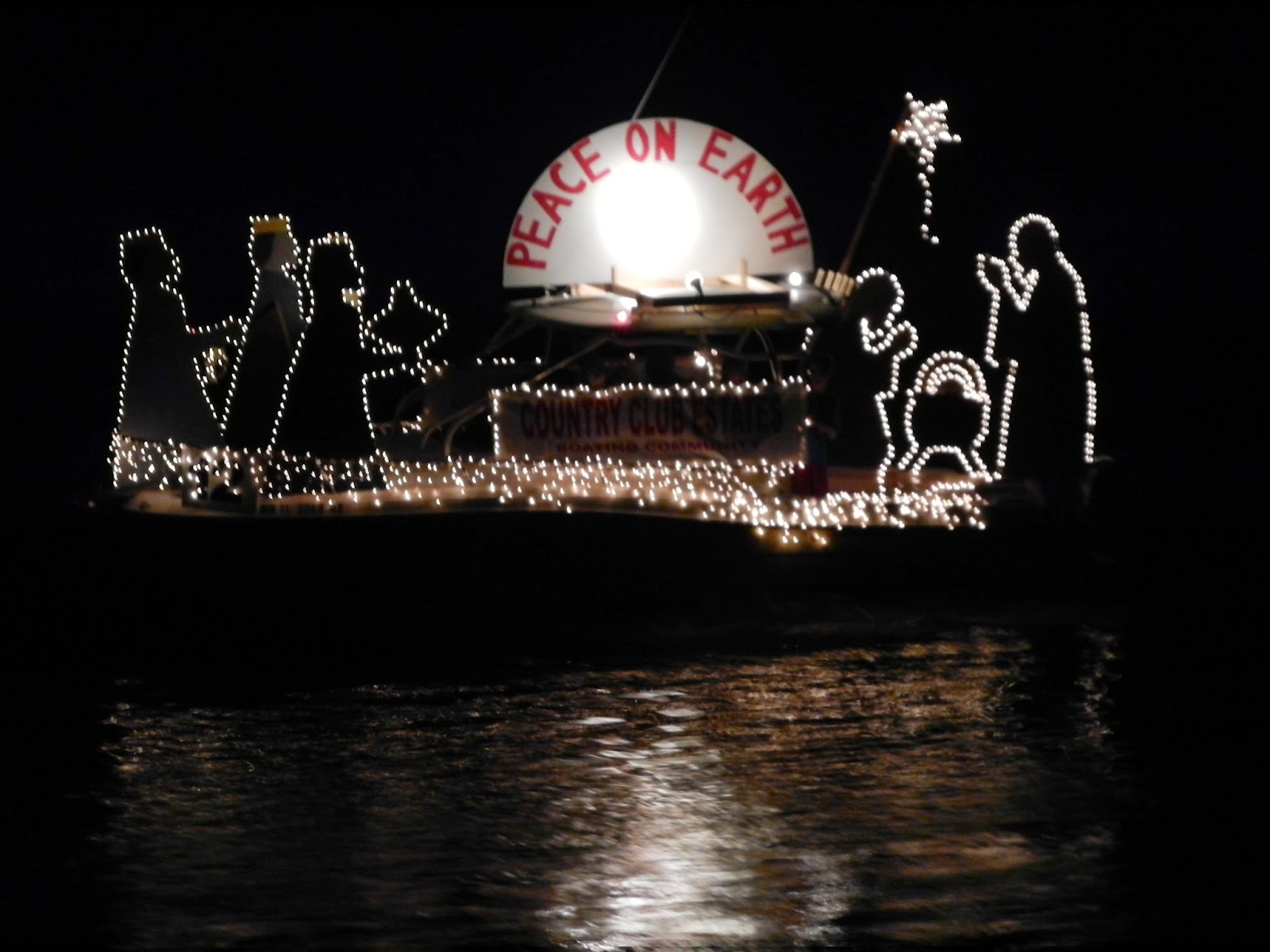 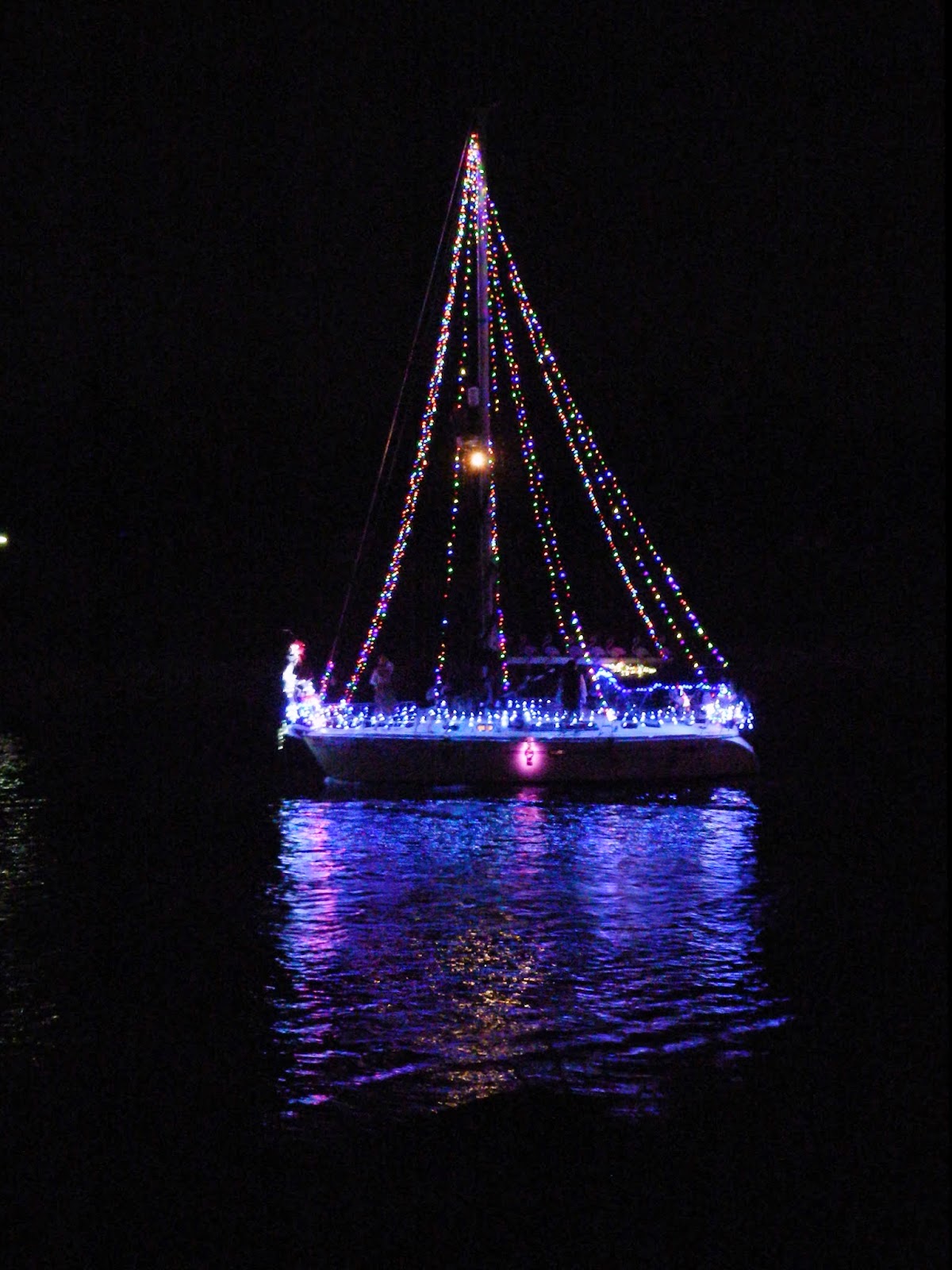 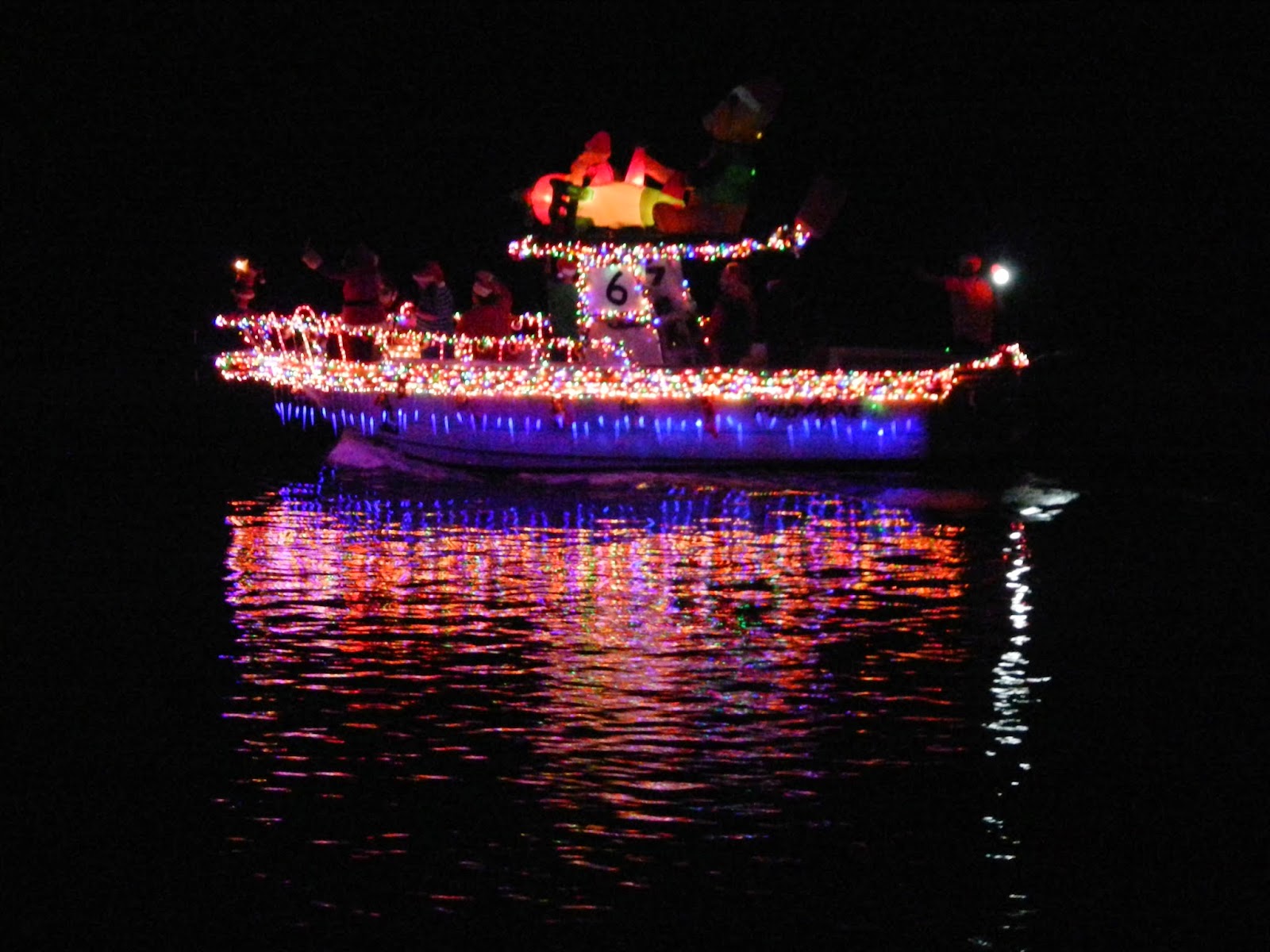 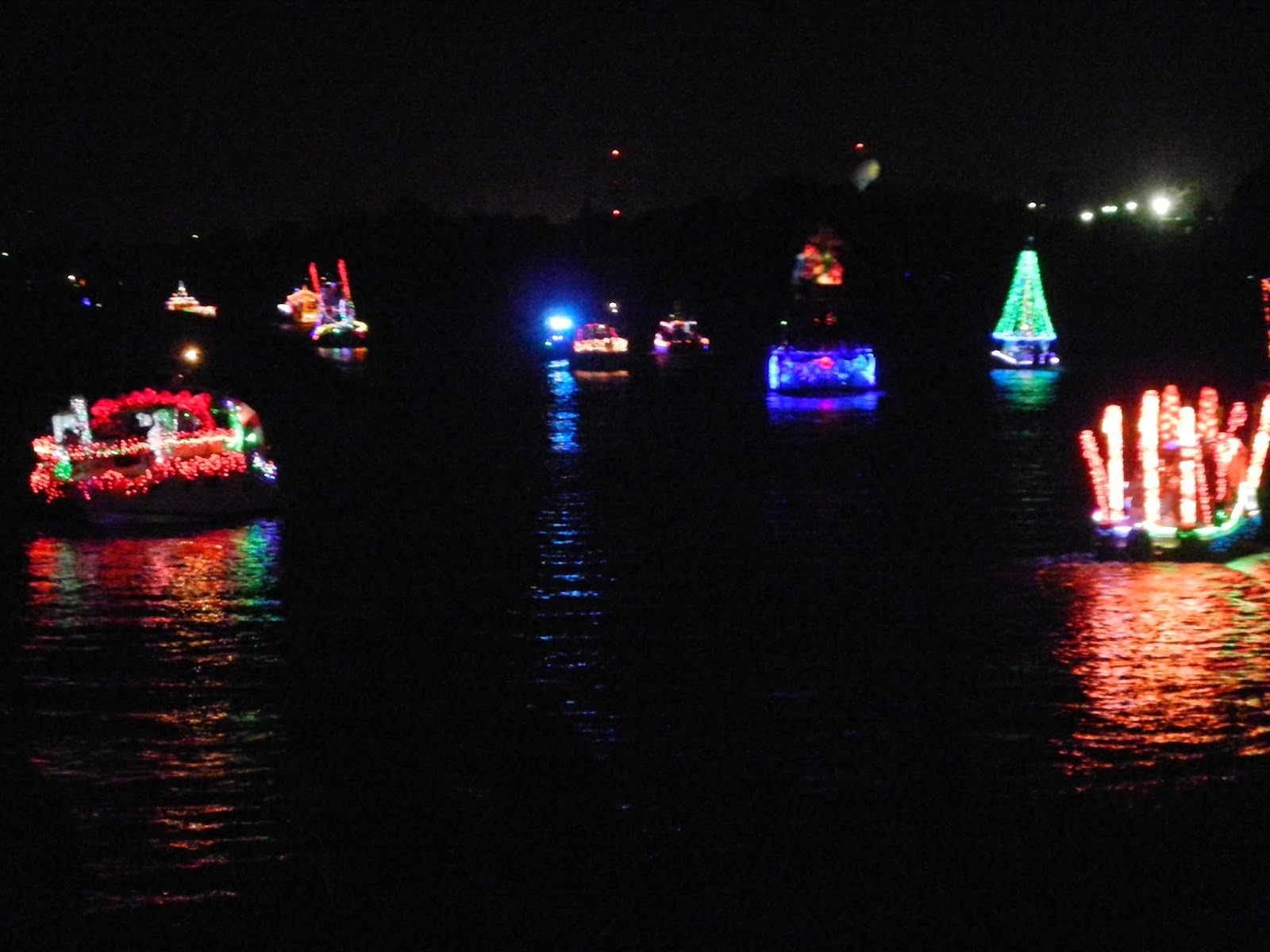 We both agreed that while Sarasota's Boat Parade was very enjoyable, Venice's was over the top.   The people watching tonight's parade were fully into it, singing and waving to the boats as they passed.  Even the folks on the boats were calling to us and singing, wishing happy holidays.  Every single person there was having a wonderful time, what a great evening we all had!
Posted by Suzi at 9:28 PM