Our son found us some sun today.     What a wonderful son he is!    Our spirits have been lifted, we now have hope that our old friend the sun is indeed still in the sky, above those heavy, gray clouds.

The three of us had a large lunch at T/aco in Boulder this afternoon.   The restaurant's name is pronounced "Tea Aco", and all they serve are tacos (and margaritas, I only had a tiny little one),  But what tacos they serve!   We had more than our share today because the kitchen made a mistake on our order, bringing out some of the varieties we ordered, and a number that we didn't.    When we explained the problem to the host, he quickly brought out the missing items and told us to enjoy the un-ordered tacos on the house.    So.....we all had more than we should have eaten.   More than we "should" have eaten.....but not more than we could eat.   burp

After lunch we walked around a bit, checking out other venues for The Wedding stuff and, since it was still a bit drizzly, Jesse suggested we take an auto hike up into the mountains.    Since he was driving and it was warm and dry in his car, we readily agreed. 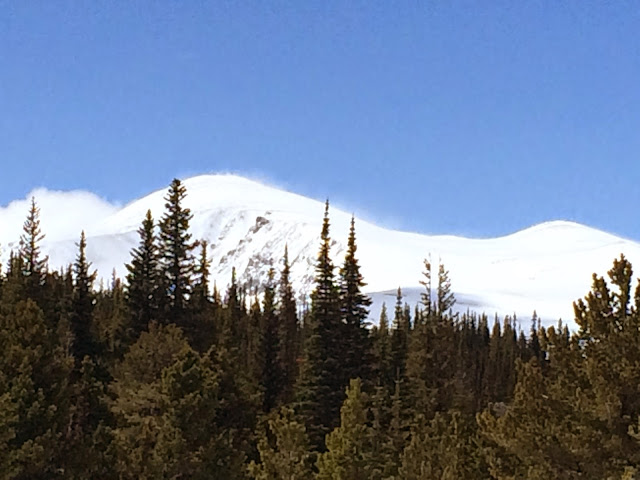 We drove north through Lyons, and took Lee Hill Road toward Ward.    I can't remember the trail head we stopped at to take these pictures, but I know it was a
little over 10,000 feet and it was brilliantly sunny.   The snow on the peaks looks a bit fuzzy, but it was the result of strong winds blowing the snow around.

I was in the back seat, without gazetteer or camera, so I'm not really sure the route we took or what we were seeing.   Jesse told us, I'm sure he did, but I was really busy just looking at the awesome scenery and trying to figure out how to use his phone to take these pictures for you.    He is in possession of a rather unflattering video I mistakenly took of me trying to get the phone to move from video mode to camera mode.    I may or may not have uttered a few unladylike words in the process. 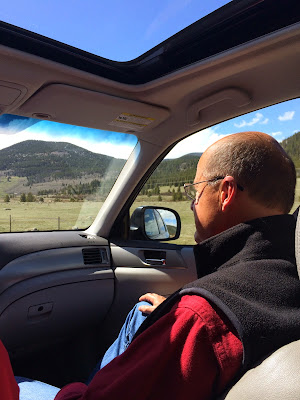 We all were very cheerful, almost giddy.    After being cooped up for many days, hostage to the rain and other necessary duties, it was glorious to be out in the sun under blue sky going where the mood took us.      Dave sat in the front seat fairly beaming in the warm sun and crisp, warmish air!

We passed some really interesting gate posts at the entrance to a ranch road.  Wouldn't they look great at the end of the cottage's driveway? 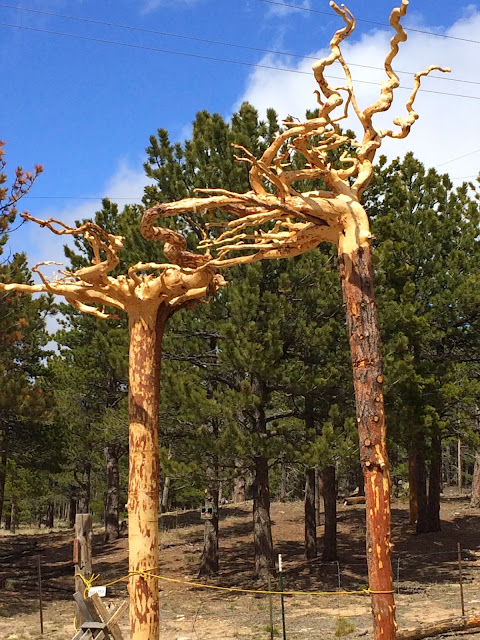 All good things must come to an end, I'm afraid.   As we made our way down the mountain, heading home, we drove through the clouds.    Once under them it was back to cold, grey rain.


Ah well.   After such a lovely day our batteries are recharged and we look forward to more sunny days and more happy times with our only child and his beautiful bride to be.