Pam and John's scheduled return was delayed a bit so Dave and I decided to accept our old friend's invitation to join them for the weekend in the 1000 Islands.   Cindy and Norm spend summers on a small island near Goose Bay in the St. Lawrence River just north of Alexandria Bay (and about 35 miles away from where Pam and John were visiting Pam's mother) and we've been trying to get up there all summer.


They call the island "Camp Henry" (for Cindy's father) and it has two small old cottages on the river.


The three of us had the small, original cottage to ourselves.   I love it, warts and all.    I love the views out the ancient, wiggly glass windows, it's rustic, whitewashed interior, the little bay outside the bathroom window, the old boathouse slowly sinking to it's knees, even the oddly sized bed with it's ridiculously bouncy bedsprings.


The downside of all that wiggly old glass and whitewashed rustic interior is that there is no insulation whatsoever.   The perfect location to view riverside sunsets means that the hot afternoon sun beats down on the cottage and the night time bugs swarming over the water have pretty much free access to the inside....if you are brave enough to turn a light on.

Record breaking heat made sleeping in the small and bouncy bed next to impossible.    Until we found that putting our heads where our feet should go positioned us right in front of a window with the most heavenly breeze.    If we kept all the lights out we didn't invite any of the water bugs and moths inside so, after a good belly laugh at ourselves, we actually got a good night's sleep.   Except for when one of us moved slightly, the other almost bounced right out the nearby window. 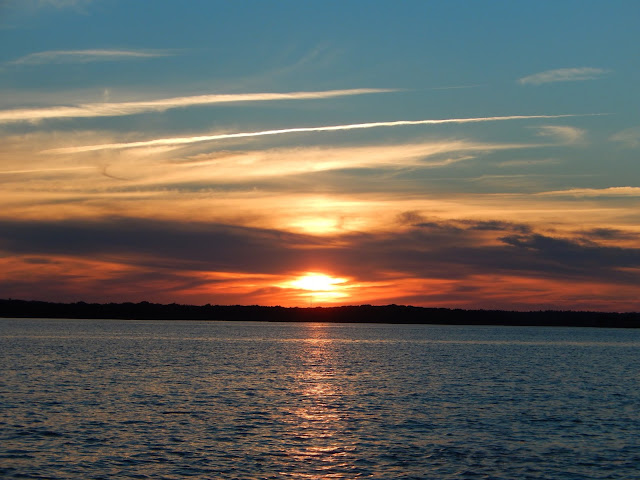 Lewis loved being on the island.   He ranged all over on his own,  went into the water for a drink or a swim, chased squirrels and even met and worried a water snake for a bit. 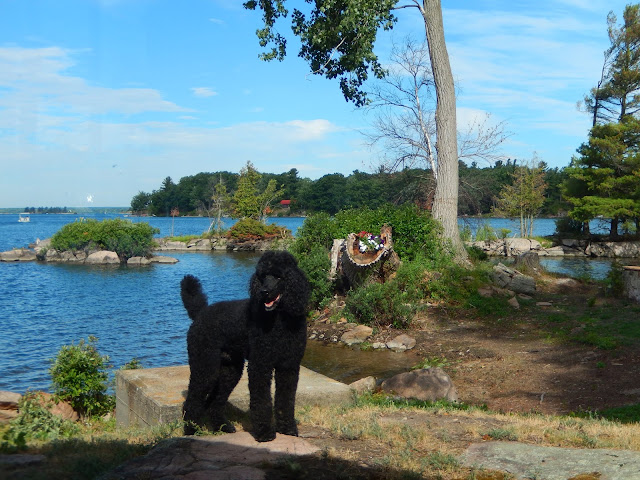 Saturday we went out in Cindy and Norm's pontoon boat to check out some of the nearby islands. 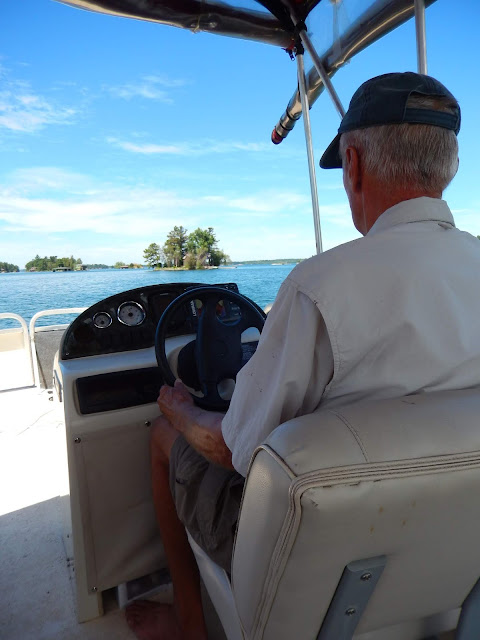 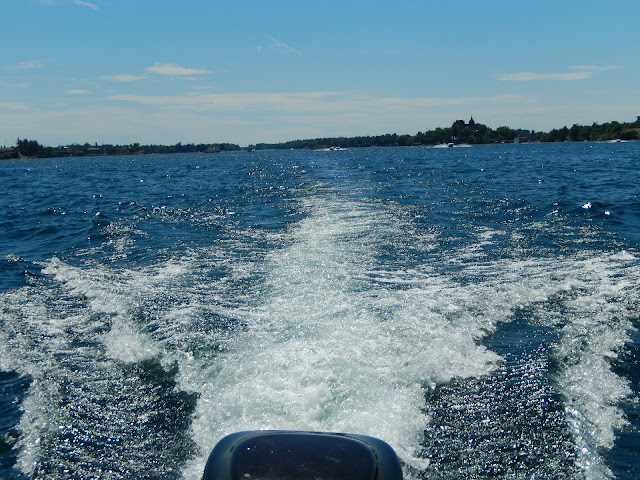 We pulled into a calm cove near the magnificent Boldt Castle and Norm cooked hot dogs for lunch on his sea-b-que grill!

Afterward we cruised around the islands while we waited for the start of the 1000 Island International Charity Poker Run.   Huge power boats race between several checkpoints, accumulating cards at each one.  At the end the best "hand" wins.

The 1000 Islands area is an archipelago of over 1800 islands, some large and some very small. 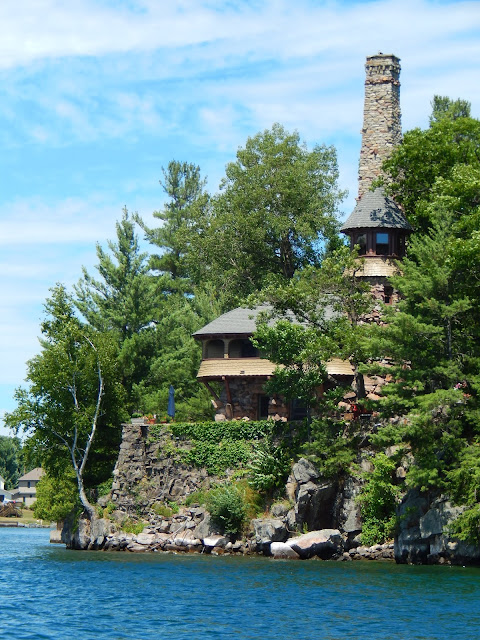 Some of the islands hold fabulous homes, new or old.   Some are tiny, just a tree or two.    Some are merely rocky shoals uncovered when the water level drops. 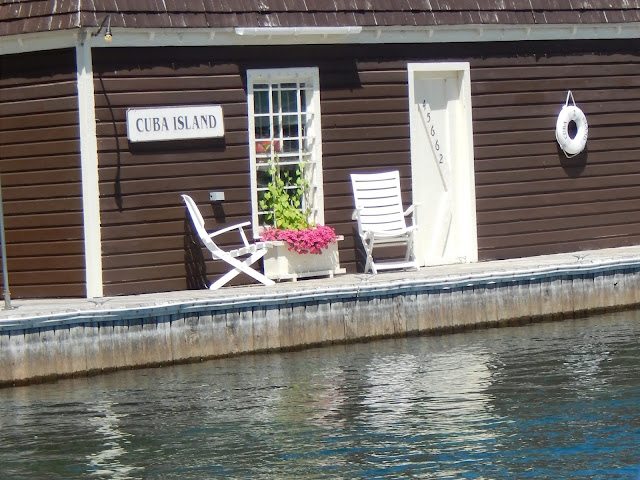 Around 2 p.m. Norm piloted our boat out into the shipping channel so we'd have a front row seat to witness the huge and powerful off shore racing boats fly by on their scheduled route.


It was difficult to catch them as they roared past us.  The day's wind and the nature of the channel made the water choppy enough but the wake from these boats had us rocking and rolling in our little pontoon boat.  Holding a camera steady and pointing it at a fast moving target proved tricky!

Sometimes they'd come by singly and sometimes in groups.   Often a helicopter followed just above them. 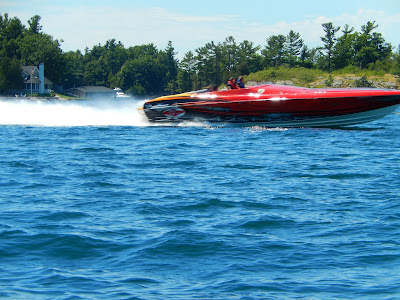 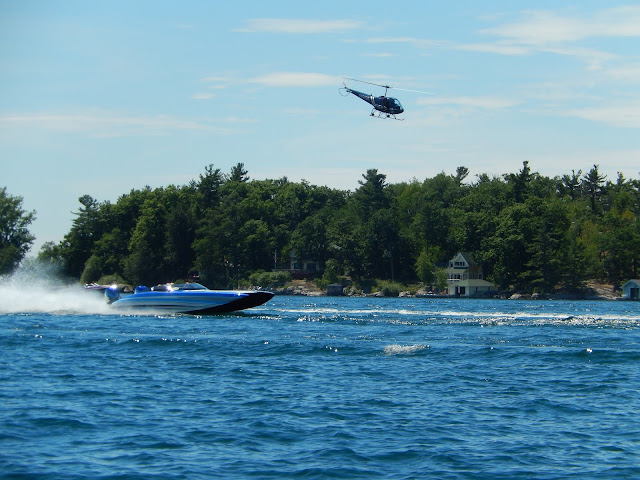 And, once in a while,  something much bigger and much slower thrummed past us.... 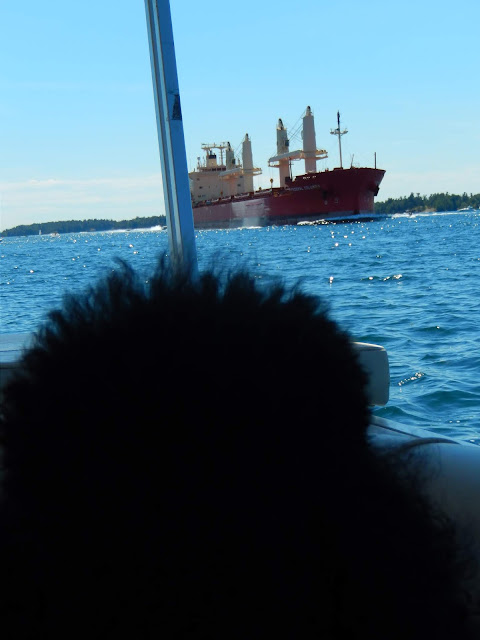 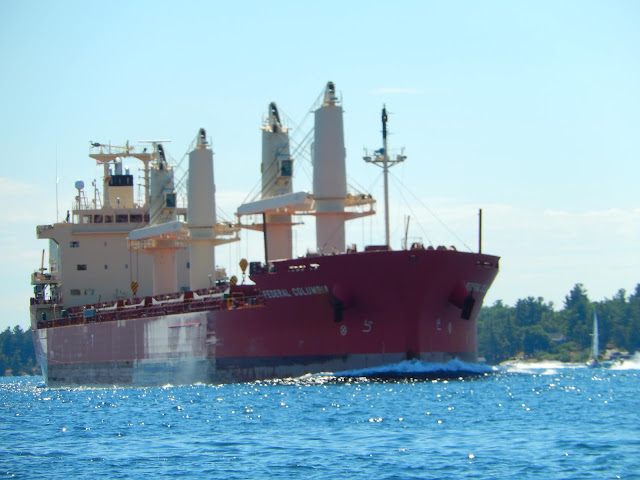 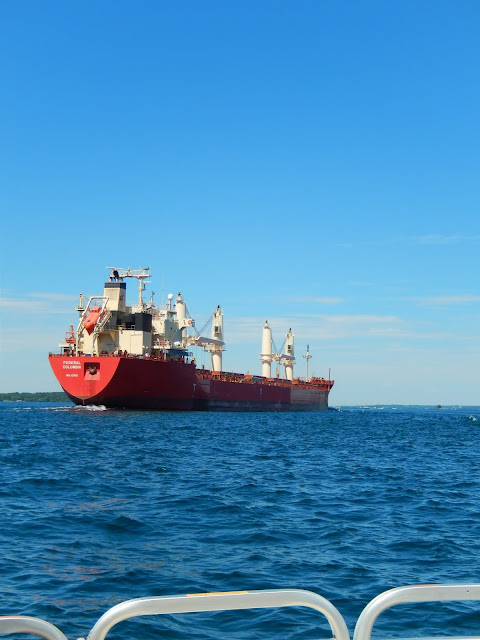 As we sat and watched and rocked the first few Poker Run boats came back from their Ogdensburg stop so we enjoyed their power for a few more minutes before heading back to the cottage for Happy Hour.


As we got further away from the frenetic action in the channel, the peace of the islands returned.    We passed a small family of Loons taking the chicks for an outing and saw a tree of Cormorants resting after lunch. 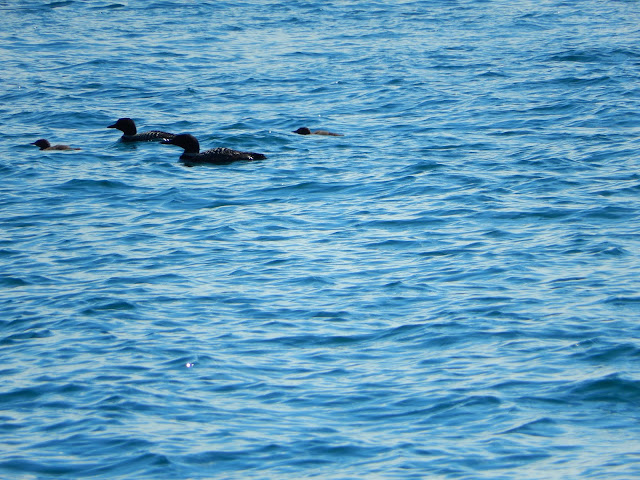 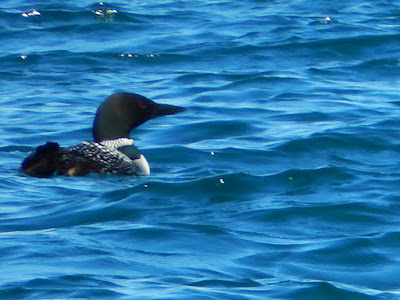 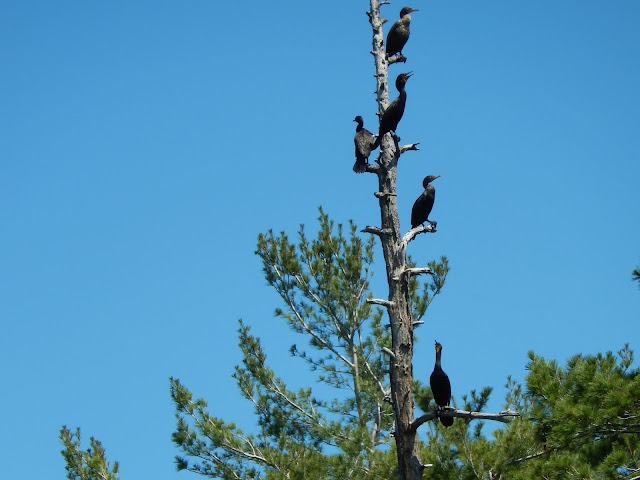 Thanks, Cindy and Norm, for a beautiful weekend in our old stomping grounds.


To top off the weekend, Pam and John were waiting for us when we got home.
Not only were they waiting, but they were waiting with a home made Strawberry Rhubarb pie and a bottle of craft Gin from Clayton!    These are good friends!