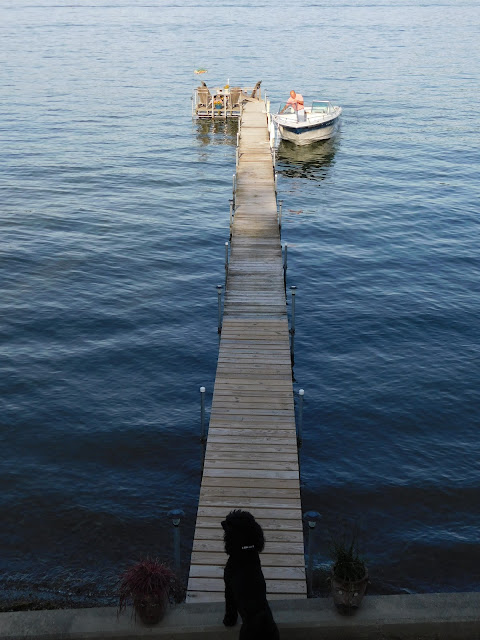 Upon further inspection, it was decided that she needed more rehabilitation than we were willing to give so she has moved on to a new home.

Our time, since that decision, has gone back to enjoying friends, spending time on the dock and floating in the lake.

This last week has been hot....very hot and muggy.   Sweat pours from everywhere when we try to do anything outside.    We have a lovely tall fan next to the umbrella table on the deck and we use it whenever we sit there.   It helps to keep the air moving, the hot, wet air moving.   We float at the end of the dock, Lewis swims after his fish but by the time we get back in the house we're sweaty again.    I know, what a baby I am to complain about summer being hot!    I'm not really complaining though, I just want you to know. 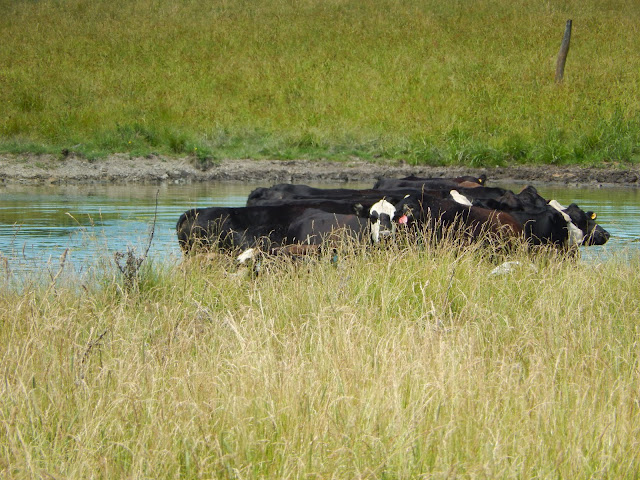 Even the cows in the nearby pasture spend their time standing belly deep in the pond. 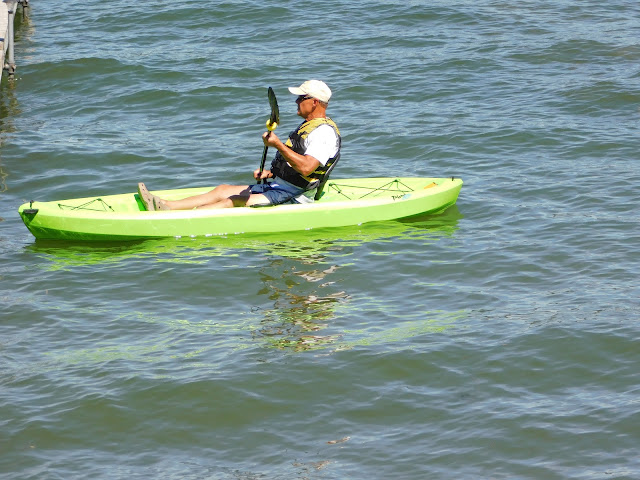 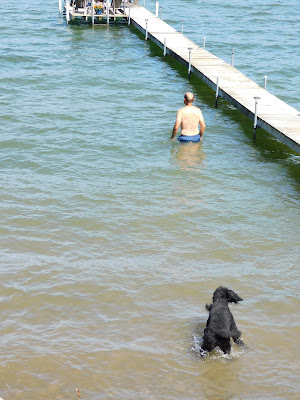 Every year, when we're here, we have a Ring of Fire party on July 3.  Dave builds an epic bonfire, we have friends over for food and drink and s'mores (when the fire dies down enough to get within 20 feet of it.....).   Fireworks go up all around the lake, some people spend a gazillion dollars on them it seems.   At 10 p.m. sharp everyone lights red flares on their shoreline and the lake seems to be ringed with fire.      The story says that this tradition started with the original residents of the area, the Seneca.    They would gather around fires on the lake's shores to celebrate it's beauty and abundance.

This year we just had a small gathering but the preparations were the same.   First, there is the building of the fire.    On Saturday evening, our friend Bob S. brought a trailer load of wood he had saved for his contribution.   He and Barb stayed for dinner and we had a lovely time visiting.

Dave really enjoys piling the wood and branches just so.   Some times Lewis tries to help.   Dave is patient with him but he really manages to remove more wood than we'd really like and eventually he's called back to the house.

Our quiet little lake gets very busy on the 3rd of July.  The water is clogged with boats, jet skis, kayaks, SUPs, and people swimming.  The road is clogged with cars, everyone has a party and guests have to park where ever they can find a spot. 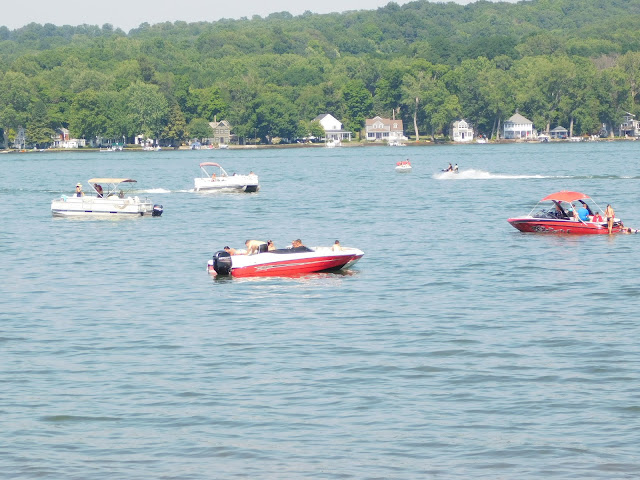 The ducks and geese are rattled.   They don't know where to go for some peace and quiet and when people begin to shoot off fireworks early they quack and honk and flutter around. 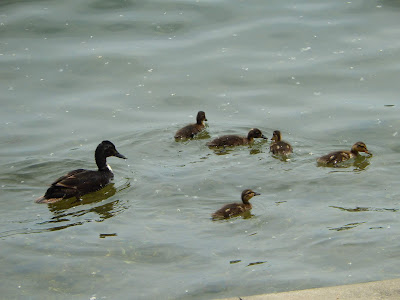 Lewis doesn't like the booms either.   Sasha used to get really freaked out at fireworks or thunder and it never bothered Lew but this year he's not having any of it.


On the night of July 2nd people began trying their stash of fireworks out in preparation for the big day.   Lewis wasn't a happy camper.   He squeezed up on the couch and got as close as he could to his protector.

The night of the Ring of Fire he hid out in Beluga with the air conditioning on and radio blaring until the loud displays stopped.   We gave him a small dose of Benadryl to help mute his senses, but I don't think it helped.


Here are some pictures of our evening.   You'll remember that I take horrible people pictures, right? 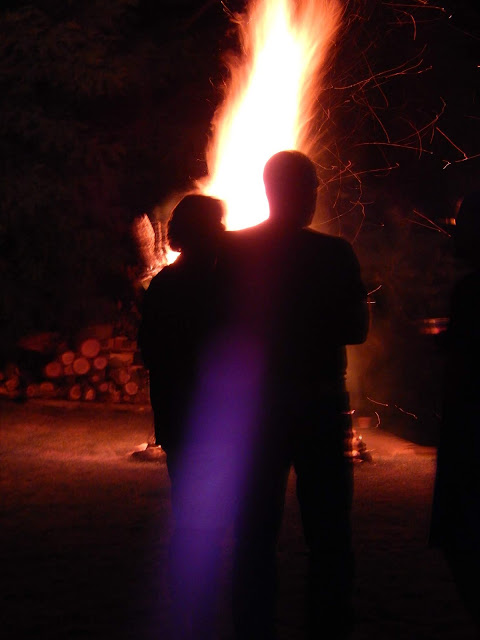 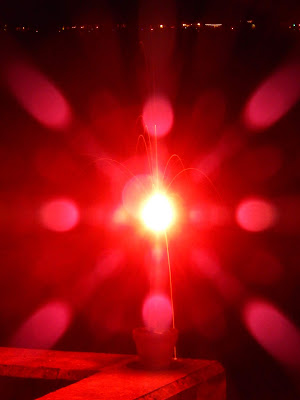 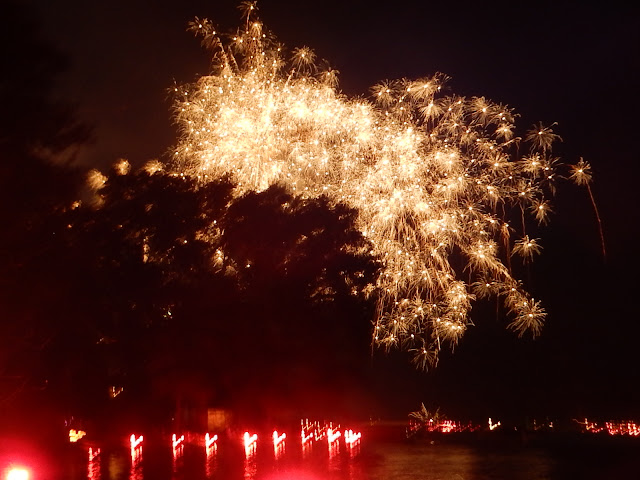 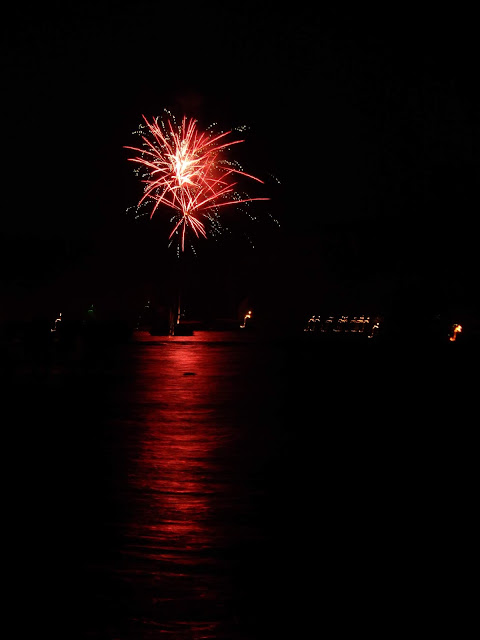 Judi and Barb stayed overnight and we spent a pleasant morning together before they left for home.    The actual 4th of July was a quiet one for us.