Fun and not fun

Jodee, Bill and Tessa came to the lake on Monday, as planned.   It was wonderful to see them again, and our two jeeps got reacquainted in the driveway.

They were in our area just for the night (and just to see us!), in the middle of some serious driving,  so we kept things nice and low key. 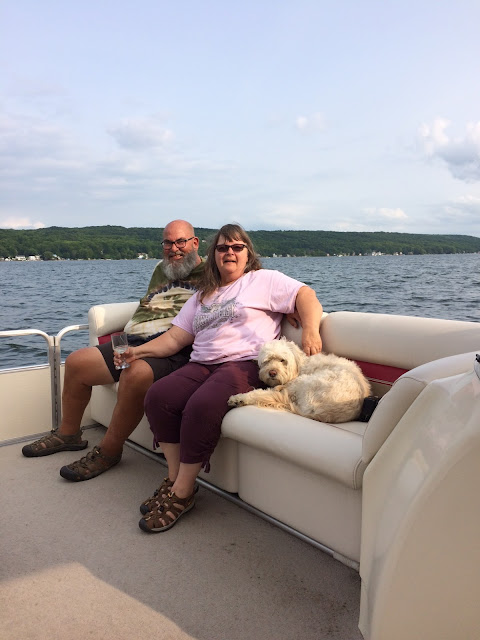 Happy Hour on the boat, a local, summer time dinner outside on the deck, travel conversations in between.


Lake life is new to Miss Tessa.   She was concerned about the stability of the dock, had to be hauled, unceremoniously, on to the boat and needed us to know that there were people in boats coming near.

Before I knew it they had to head home and get ready for another day's drive in the morning.    We'll see them down the road, a very nice thought.

Bright an early on Wednesday morning, as Jodee and Bill took off for their next stop, we headed into Rochester for my 8:30 knee arthroscopy appointment.

The University of Rochester outpatient facility is a finely tuned assembly line.   Everything went according to plan, I talked with my assigned intake nurse, surgery nurse, surgeon (who marked my leg with his initials, just to make sure he did the right leg), physician's assistant, anesthesiologist, his assistant, etc. and then heard them all give the same spiel to the person in the next cubby.   They wheeled me down to the surgery and that's the last I remembered.     Home to the couch by 1:30.


I don't remember much of yesterday, but what I do remember I'd rather forget.   Evidently my body does not like Percocet.    Not one little bit.   And don't get me started on crutches!      The medication served to empty my stomach of everything I tried to put in it, within minutes, every single time.  Not so much as a sip of water.      I'm doing better on the crutches today, but yesterday Dave had to walk backwards in front of me with his arms spread out to catch me as I wobbled and tipped myself from the couch to the bedroom and in between.   Lewis took his self appointed job of nurse quite seriously.   He stuck very very close, except when the crutches came out.   That worried him a bit because they scared him, but I was using them and he NEEDED to stay with me.  He's settled down a bit now, but he's still worried about me.    What a guy.


The compression bandage comes off in the morning and PT starts next week so I think we're on schedule!
Posted by Suzi at 7:50 PM