The end of the summer season is here, already....   There will still be plenty of nice weather until we leave, just less people around to share it with.    We haven't been doing anything much different since I last posted - it's summer at the lake!

If you're still interested, I'll show you some pictures.

The weather has been up and down.  Rainy and sunny.  Hot and humid, dry and cool.   Interesting skies and rainbows. 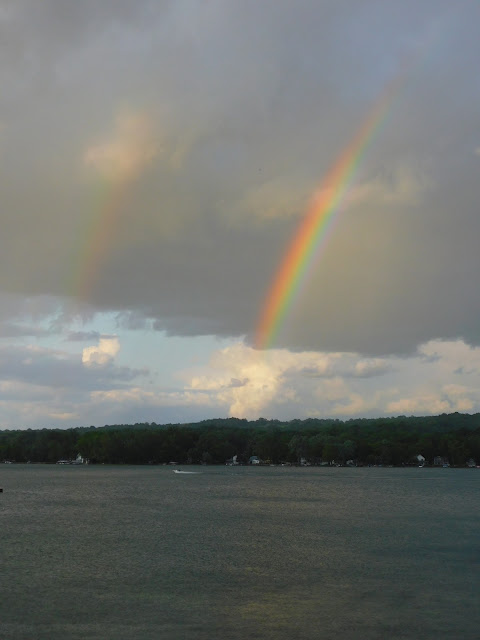 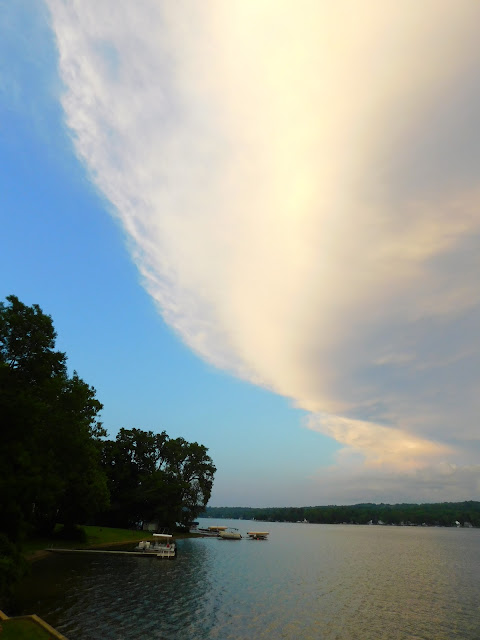 One week was so rainy and damp that we had to take plastic bags out on the dock if we wanted to enjoy happy hour without getting a wet seat!    We won't be deterred.... 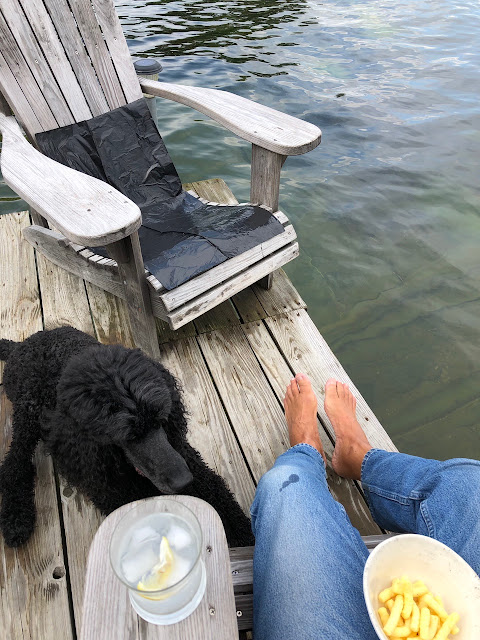 We continued to enjoy the company of old friends....some older friends than others.   I reconnected with my very first girlfriend this summer.   Our mother's were best girlfriends and Patty and I spent a lot of time together when we were little girls.    We lost track of each other in our late teens, each going our own way.    We haven't seen each other for at least 35 years, she'd met Dave when we were all 17 but I'd never met her husband of 39 years!    It was such fun.   The two guys got along famously and Patty and I talked and talked and compared our "adult" lives.   Still so much in common.


One Friday we drove out to Dave's brother's campsite on Lake Alice.   We had a great visit and then went out for hot dogs and ice cream - it may have turned out to be a two ice cream cone day but don't ask about that......


A few days ago friends Judi and Barb came down for another overnight.    We took a peaceful boat ride around the lake and then enjoyed Bushy Tails and corn outside by the warmth and light of the chiminea.    After dinner we stuffed ourselves on Judi's homemade cheesecake and watched movies.

Visiting friends aren't just of the human persuasion.    We have a couple Mergansers that work the cove waters almost every day.    We consider them friends. 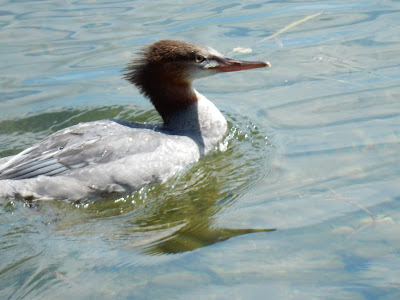 The Rabbit Room continues to be our Thursday night dinner preference (with Tom and Robin most often) but our favorite waiter, Michael, has quit to take another job in Geneseo.   Word going around is that the owner's of this wonderful and unusual restaurant will close it down soon to concentrate on their other place here on Conesus Lake.


We've tried eating there (The Hook and Spoon) a few times, most recently last week.   A Rabbit Room caliber restaurant nearby would be wonderful for us.  But... it's not the Rabbit Room -  not the food or the service or the ambiance.  In our opinion it isn't the sort of place we'd return to.   Sigh.


We don't just eat out, even though it sometimes sounds like that.   We're in the middle of farmland here and summer's bounty is irresistible.  Last week I used that morning's freshly picked sweet corn, green peppers, onions, tomatoes and basil to make New Orleans' inspired maque choux.    A few grilled shrimp on top made a yummy dinner for the two of us.


Our  marigolds and zinnias and coleus are waning.   Their programmed summer strength is giving out, their time is short.    Weeds, however, never seem to fade. 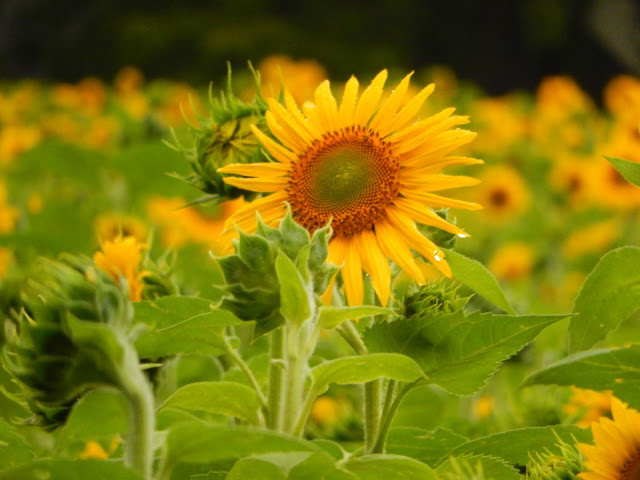 Lewis is still enjoying his summer life.  "Getting busy" wherever he wants with no one at the end of his leash, getting a drink in the big water bowl when the spirit moves him, barking at passing boats, sleeping in and fishing after dinner.


Lately we have added a new dimension to his second cup and happy hour routines.    Usually he lies quietly beside us and gently accepts tidbits of whatever we are dunking in our coffee/tea.   For the past week, however, we've given him a raw, meaty bone to gnaw on when we're outside.   He LOVES it....thinks he's died and gone to heaven.


He takes it from my hand and hustles down to the grass or into the ivy without a backward glance.    He turns away from us and chews and chews and chews.   I'm hoping it will clean up his teeth a bit since the tartar has become to build up. 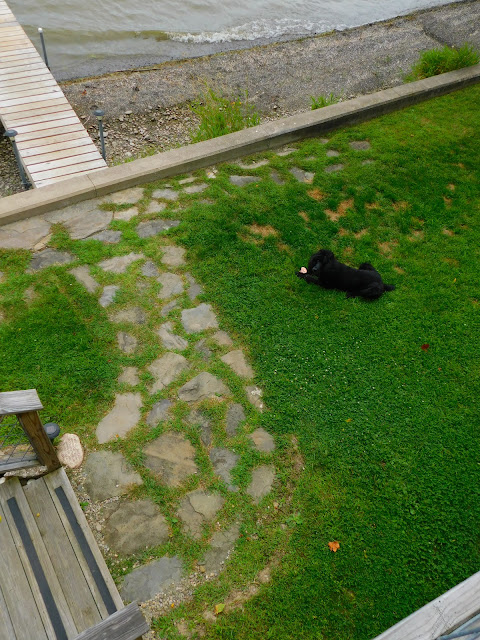 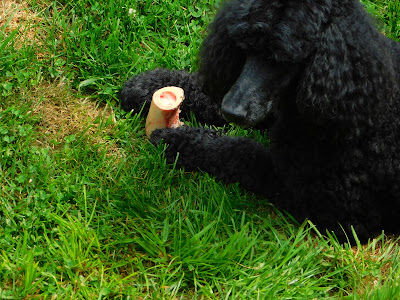 Today a small boat parade passed by our dock.   A sweet, small town end of summer ritual.     One boat was pulling 4 water skiers behind but I wasn't fast enough to get a picture. 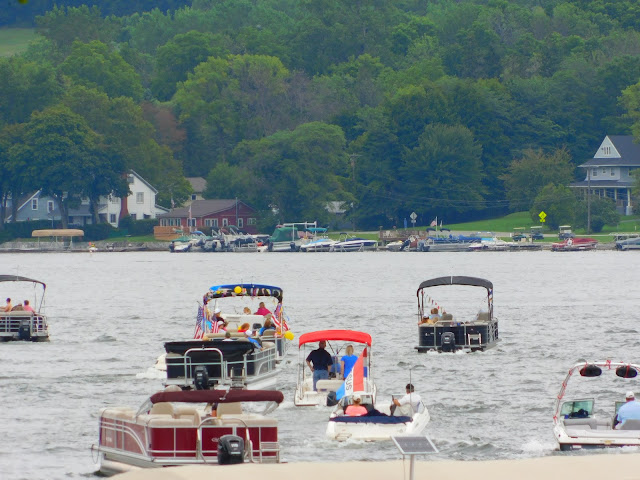 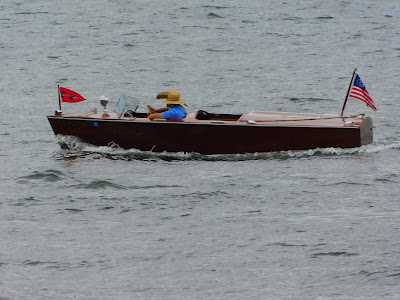 My lap top hasn't been feeling well, shutting down unexpectedly for a month now.   It's been to the doctor a number of times so I hope this blog will post without incident.   Finger's crossed.