Museum of the Great Lakes

We sleep like logs here,    It is so silent that the normal things don't wake us and even Dave sleeps way past his normal time.

After lunch we went into the eastern edge of Toledo to the National Museum of the Great Lakes.   It was cold, windy and rainy today and the museum sounded like a good way to spend the day. 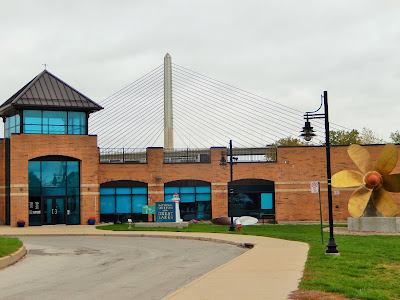 We've lived around one or more of the Great Lakes all of our lives, spent much time in the Thousand Islands region watching and keeping lists of ocean and lake freighters moving through the St. Lawrence Seaway so this museum seemed like a natural stop for us.

PLUS, the museum includes a historic Lake Freighter built in 1911, during the second industrial revolution.   We've seen these big ships often and were excited about the possibility of actually boarding and exploring one. 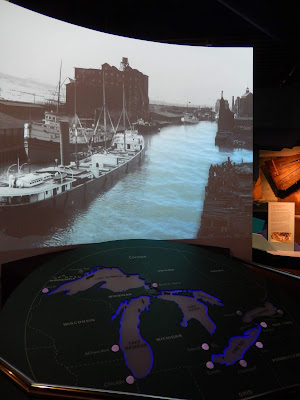 We spent a good hour in the museum proper, looking at the nicely laid out exhibits and pushing various buttons and manipulating joy sticks to bring the Great Lakes history to life.


We "dove" to the bottom of Lake Superior in a virtual sub to locate the wreck of the legendary Edmund Fitzgerald.   Gauges showed the depth as we descended, the amount air left to breathe.  After using the radar screen to locate the lay of the ship, we turned on the lights to scan the lake's floor looking for the ship wreck.     Fun!

We learned about the indigenous people and their lives on the shores of these big lakes.    We watched the building of an authentic birch bark canoe.    We learned about the flora and fauna of the area, it's geologic history, it's importance in the settling of the west, the industrial revolution, man's abuse of it's riches.     We saw beautiful Fresnel lenses from the many lighthouses and about the thousands of shipwrecks, some unexplained and mysterious. 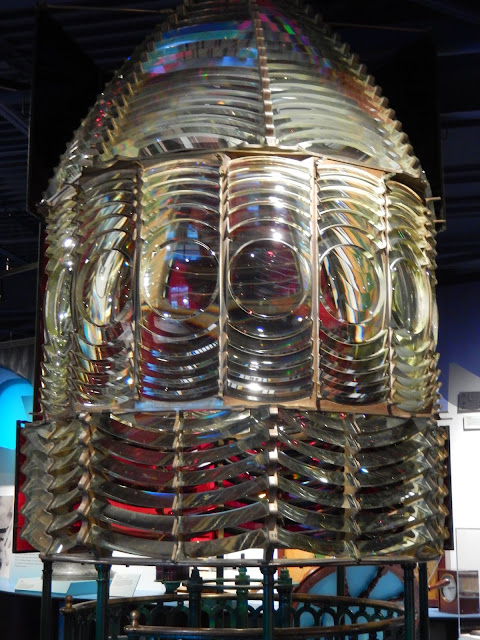 But what we really wanted to see was the ship moored outside.    We wanted to see it bad enough that we braved high winds and pelting rain to do so. 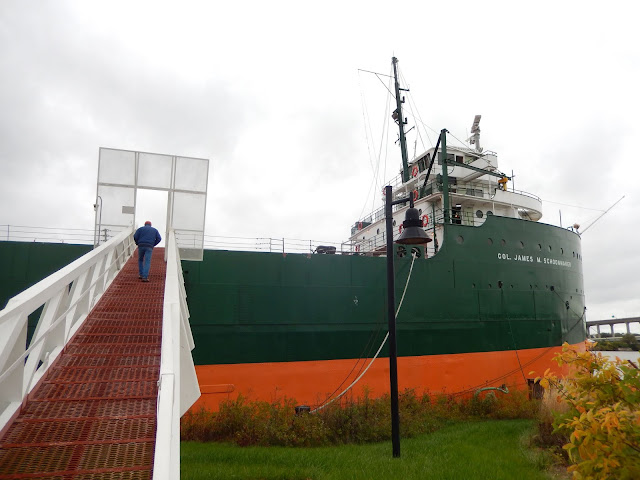 We were the only ones there....on the entire ship.   It felt like a ghost ship to me, suddenly abandoned in time. 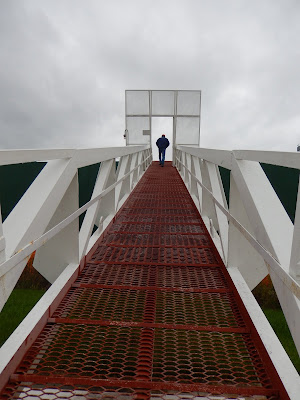 I have to admit that I was scared the entire time.   The gangplank used to board the ship was steep and see through.    The deck was wet and very slippery and I never realized how high these ships were. 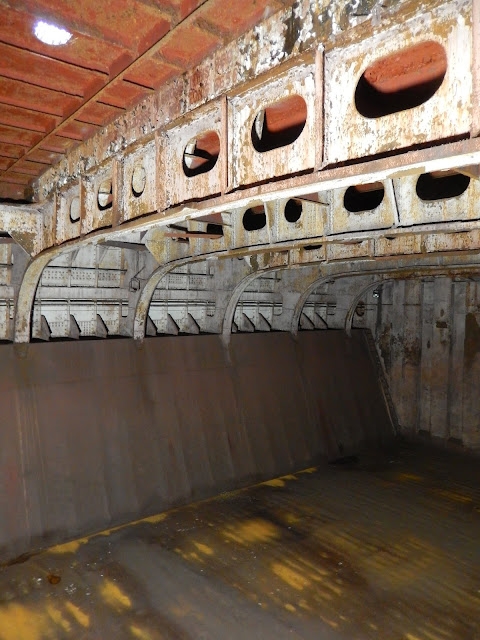 The wind made me feel like I was going to be blown overboard and I didn't feel sure of my footing at all.    It was silent up there, the only directions were the little yellow arrows leading our way.     I almost turned back but, once again, my curiosity bested my fear.      The arrows lead us down very steep, metal stairs and into the guts of the ship, where the iron ore, or whatever it carried, was stored.
The chambers were huge and steep and empty and echoed loudly.     It was cold and dark, light from a few light bulbs and an open hatch above. 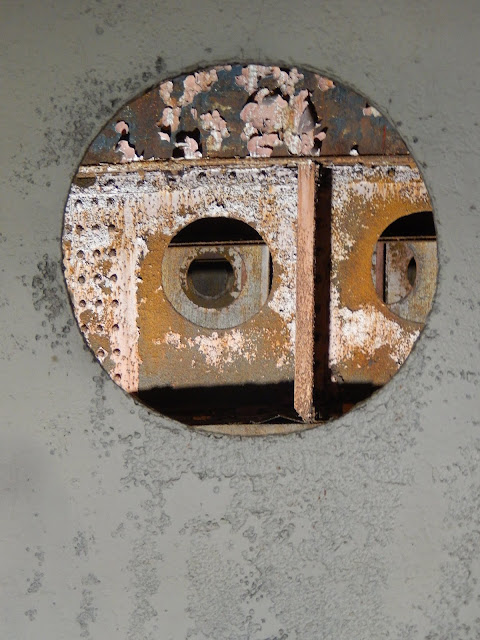 Back up the stairs and on deck again....rain and wind.    We accessed the ships galley and mess, the Officer's Dining Room with flowers on the table and dishes on the sideboard. 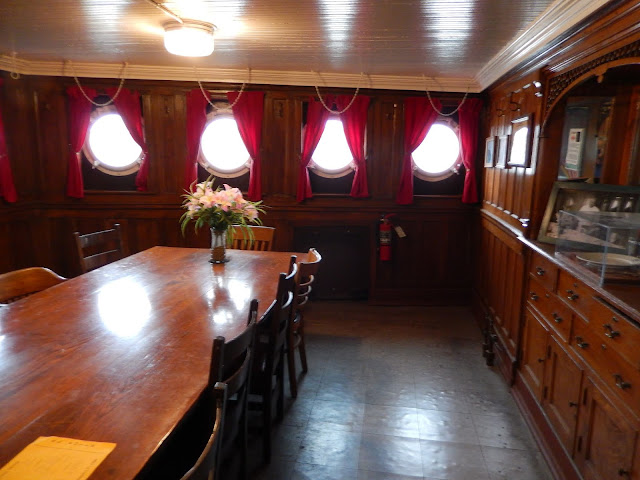 The crew's quarters looked as if they were left quickly.   Personal items, a menu, books, etc., scattered around....where were they? 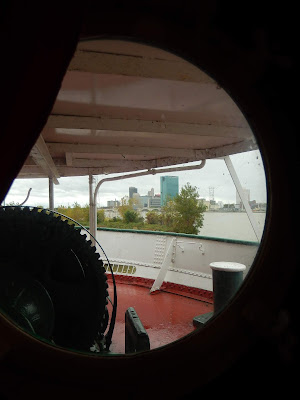 I guess my imagination was running away with me in the cold and silence.   Dave descended another steep stairway to explore the two story engine room but I stayed above.    By myself. 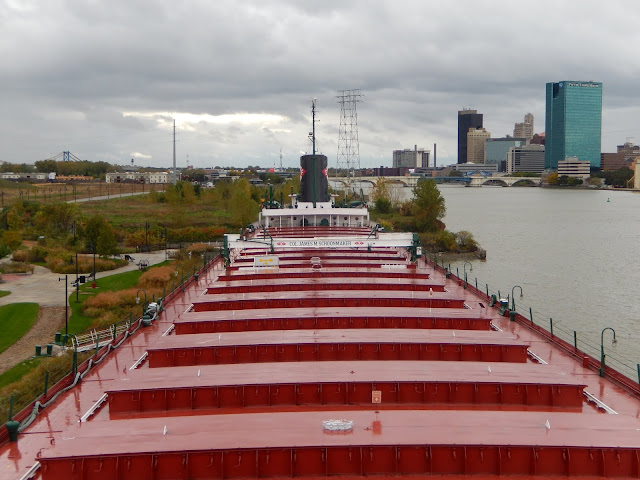 Once back down the see through gangplank we hustled over to the newly acquired Tugboat.  We had tickets for a guided tour but we were late and missed it by 45 minutes so we called it a day.

Back at Beluga we chased the bone chill away with a nice bottle of red wine and dinner of Buffalo Chicken Wing Pierogi.