Sunday was Dave's birthday and it started off in a very nice way.   Cindy and Walter brought coffee and muffins to the lake and we sat beside the water enjoying our second cup, the company, and the beautiful sunny and clear day.   Not much better.


We aren't staying there, but we can't miss an opportunity to spend a little time by the water's edge.  Actually in addition to the birthday second cup, we had a bit of business to take care of before the afternoons arrival.    Left alone, the wild grapevines and ivy had taken over the driveway and decking and we needed to beat it back so that Beluga's younger sibling would have a nice place to spend some time.

After lunch we drove to nearby Dansville to meet Pam and John and lead them to Mr. David's Lakeside RV Resort.   The route takes us through some small streets and we felt they may need an extra pilot escort to find their way.


After they got backed in to their site and settled in, we picked them up and brought them up to the house for cocktails.    Lewis and Sasha were looking forward to seeing "Gramma Pamma" again.   Oh Joy say they! 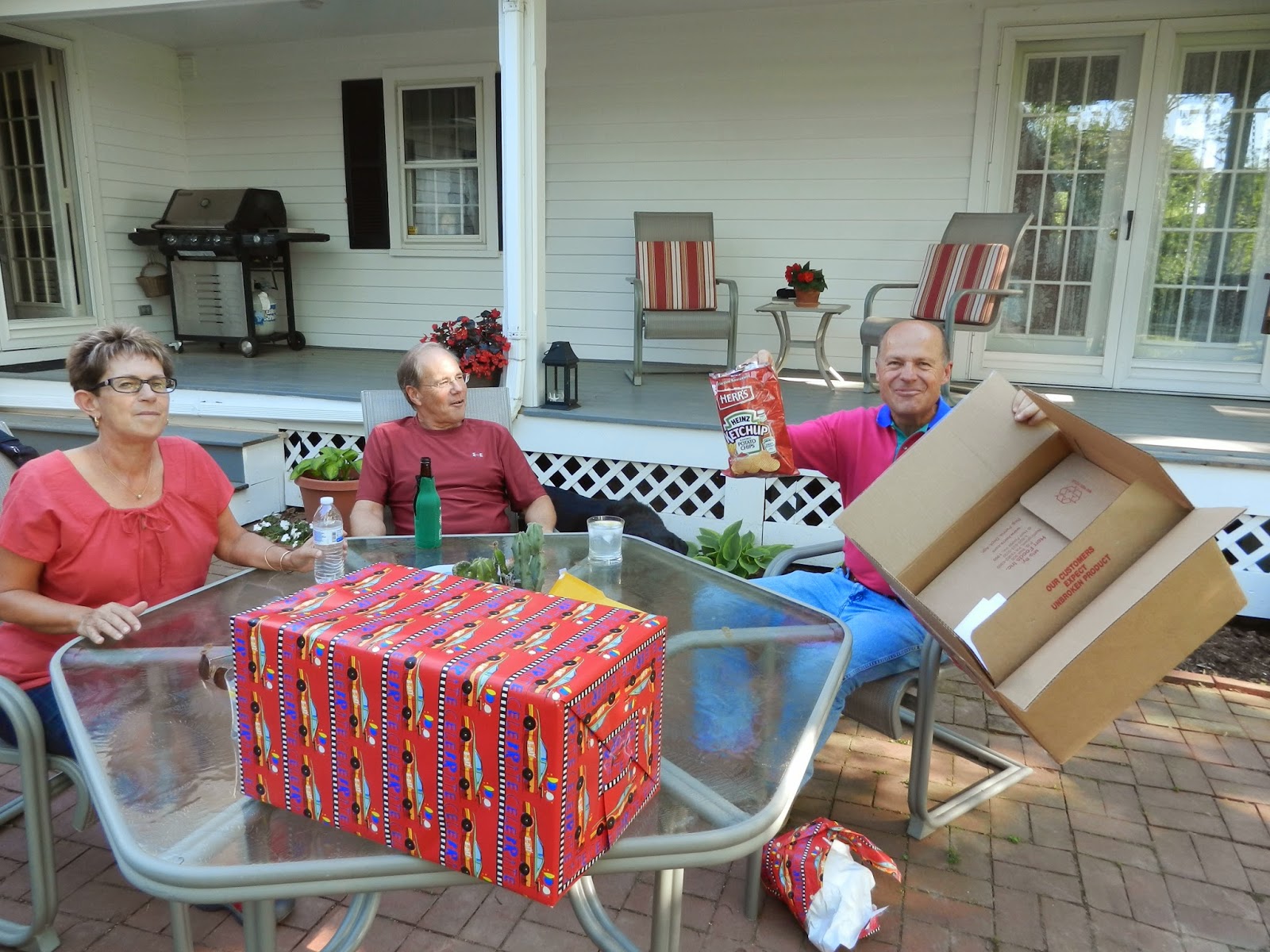 The Wright's came bearing gifts!    Herr's Heinz Ketchup flavored Potato Chips for the birthday boy - his favorite and a very very difficult variety to find.     Thanks guys, you made him grin from ear to ear!     They didn't forget me either, the other large box is mine......

This morning (Monday) we met the last builder and got his proposal for the little cottage.   We'll have to make a decision in a day or two if we want to get his project going.    After he left we gathered Sasha up and whisked her off to  her vet's appointment.   She has a very large hematoma on one of her ears and also needed a screening blood test.    We stopped for a few errands on the way home and then checked in with John and Pam to make plans for a lasagna dinner at the farm. 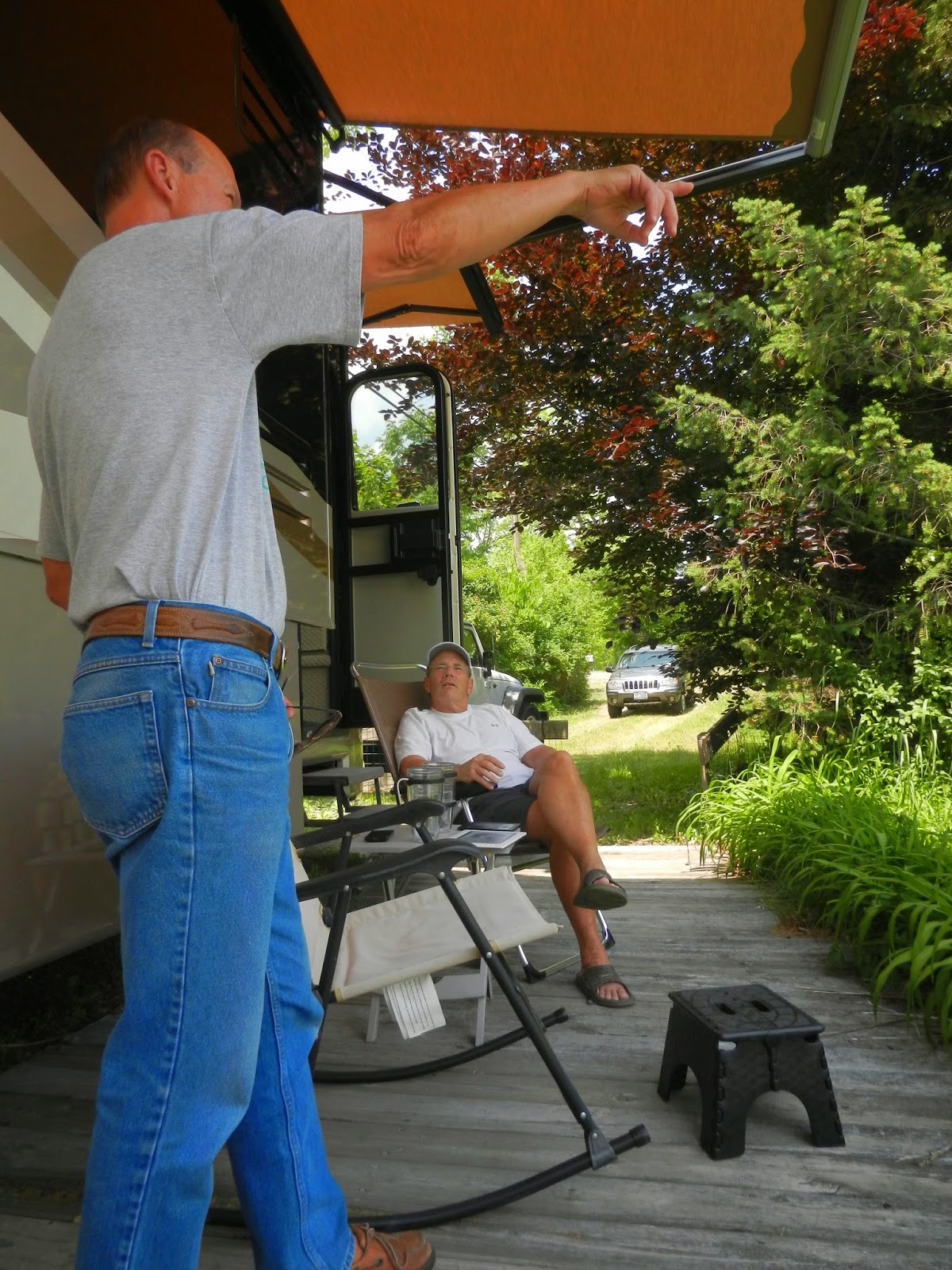 While we were all sitting on the back porch, we noticed a large doe enter the back pasture.    She stood for a minute, then moved off a few feet away and didn't move.  It was raining pretty hard by then, thundering and lightning also -  but she never batted an eye.     I thought it was odd behavior.   I've been waiting for one of the does to bring a fawn into the pasture so I had my binoculars at the ready.   I wondered if she was pregnant and perhaps that was  why she was acting so still, but upon close inspection I could see she was not.

Turns out that when she entered the pasture, she was pregnant.    When she moved away, she wasn't!

She had dropped her fawn right before our eyes!   She stood ever so still just watching and waiting for her tiny spotted babe to get up so she could move it off into the orchard behind the pasture.

We all just sat spellbound and watched a real birthday unfold.   The little one struggled up onto  its spindly  legs and began racing around its mom.   Back and forth it shot, still wet from birth.   After only a few minutes  it raced out the gate with mother following closely behind.   Miraculous....

Pam managed to get a fuzzy picture, but my camera was in the house and I didn't want to move a muscle. 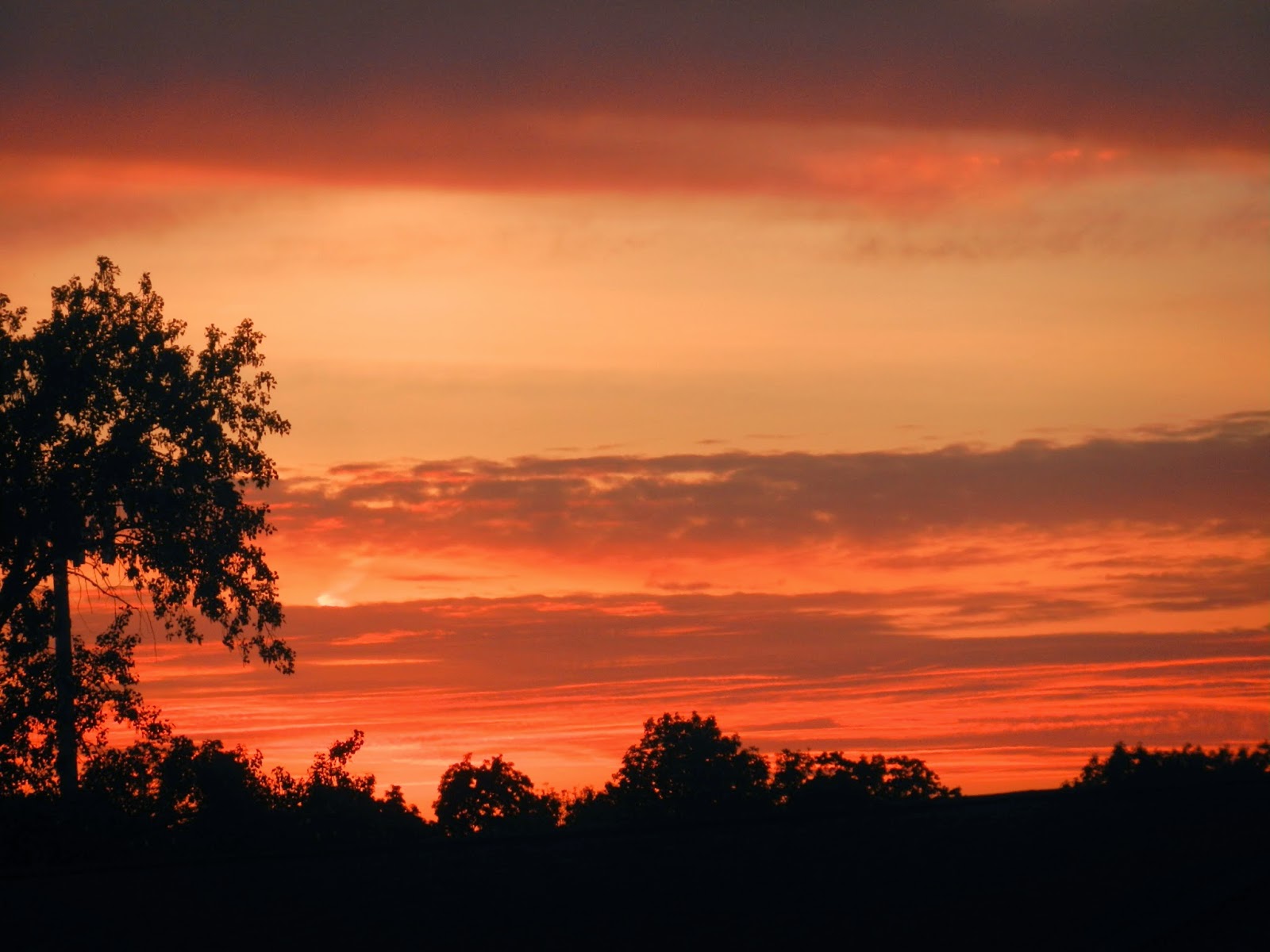