Sunday it was officially Spring.....at least for Dave spring had come officially....
For most of his life, the big sign that winter was done and spring had finally arrived was running of The Daytona 500.    We've never gone to the Florida track to watch but every year we sit in front of the television and enjoy the "opening day" of NASCAR racing.

That was after second cup on Sunday.    We left Sasha sleeping very soundly outside in the ex pen while we went inside to get ourselves settled in front of the tv.   No reason to disturb her beauty sleep.   She's been known to stay out there, on her own, for hours until she wakes, looks around and then announces, loudly, its time to come inside.      I keep watch on her through Beluga's open windows and Sunday was no different.    I could hear her snore....

One of the times I looked out I couldn't believe what I saw walking slowly and deliberately toward our sleeping black beauty.


A coyote was stalking her.   It was coming up from the natural space right off the back of our sitting area and it had its eyes locked on her sleeping form.   She, of course, was oblivious.   I flew over Dave to get to the door and by the time I was down Beluga's stairs, the coyote had turned tail and was running in the other direction.    She never woke up.    As a matter of fact she was a little put out that I woke her up and made her come inside.   No gratitude.      We watched the critter continue its hunt up and down the shrubby area, occasionally jumping high in the air and dropping down on some little creature....

Tuesday we took a little auto hike into the Ft. McDowell Yavapai reservation.  Every time we drive out of this park we pass by rows and rows of beautifully manicured, bright green, citrus trees and we were on a mission to get closer to them and see if there were any oranges for sale, or even better, if there was any orange blossom honey for sale.     No luck, we couldn't seem to find them once we left the park but we did follow a dirt road into the Ft. McDowell Tribal Farm.
We drove miles through acres of leafless groves of what we later found out were pecan trees, the Yavapai tend 1000 acres of pecans.  The very tops were just beginning to color and grow, spring is surely coming!   We never did find those citrus trees, but later learned that there are over 325 acres of them on this reservation.


We ended up at the Verde River, at Needle Rock, and enjoyed a short walk along its banks.   So often our rides take us to some body of water or other....I wonder what that means. 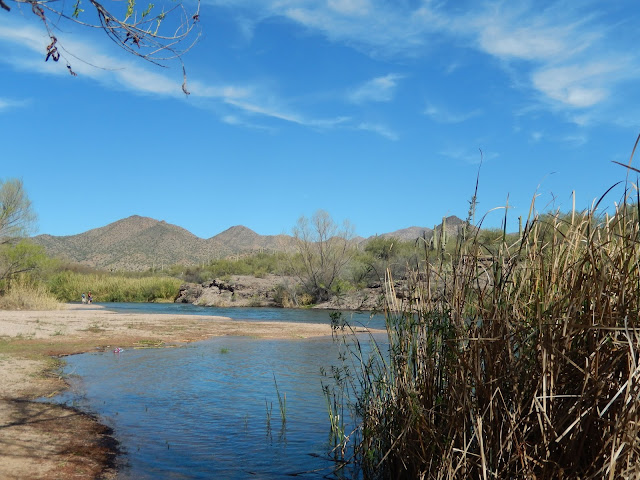 We were happy to see how clear and deep and swiftly running this river was. 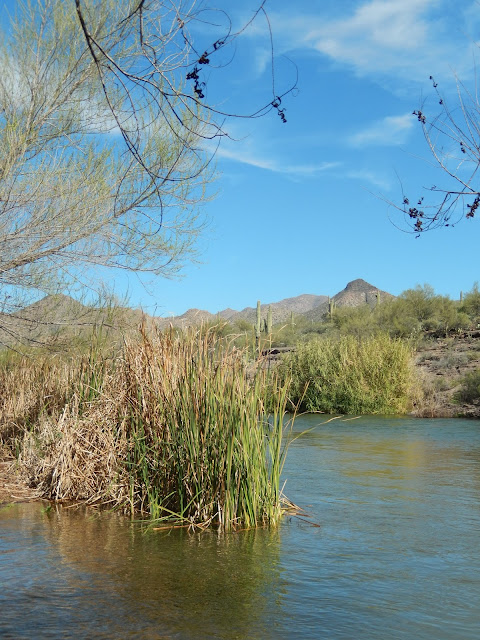 The trees along the shoreline were clearly taking advantage of the ample water supply and leafing out beautifully. 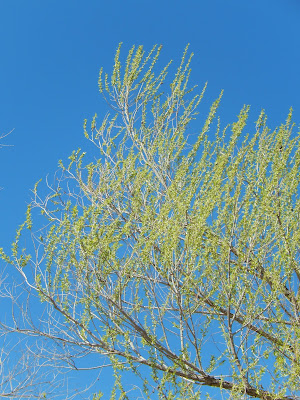 We walked along the racing current and discovered little coves where the water was still and birds flitted through the underbrush.  We enjoyed our stroll very much. 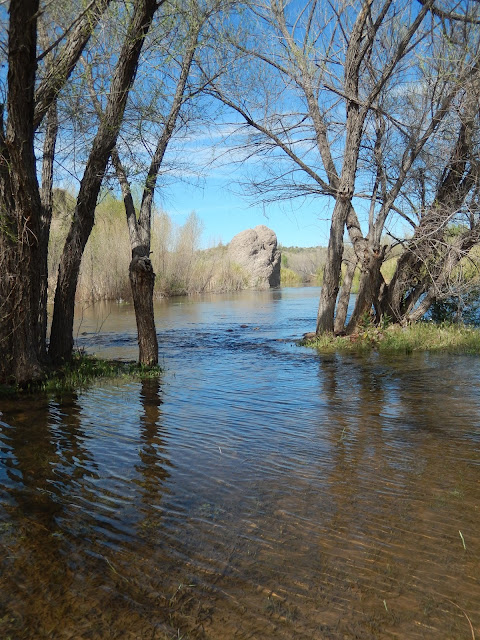 We got home an hour before we were to meet friends from our business days in Rochester.   Linda and Dave have lived in Scottsdale for almost 20 years now and we always make time for at least one visit each time we're here.    We drove around the McDowell Mountains and into north Scottsdale to join them for dinner at Isabella's Kitchen.   Great restaurant, great food and great friends.   A great evening.   We parted company with a promise to try and meet again in Denver this spring.   I took no pictures.

This morning we had a visitor.   Mr. David had called in help to replace Beluga's windshield and he arrived today right on time.   Since we have full glass coverage Mr. David decided to let the professionals handle the removal and replacement.

Sasha watched the process quietly, wagging her tail at the installer occasionally but guess where Lewis spent the morning. 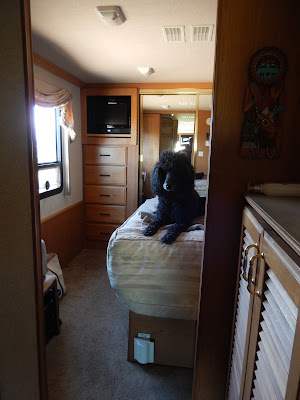 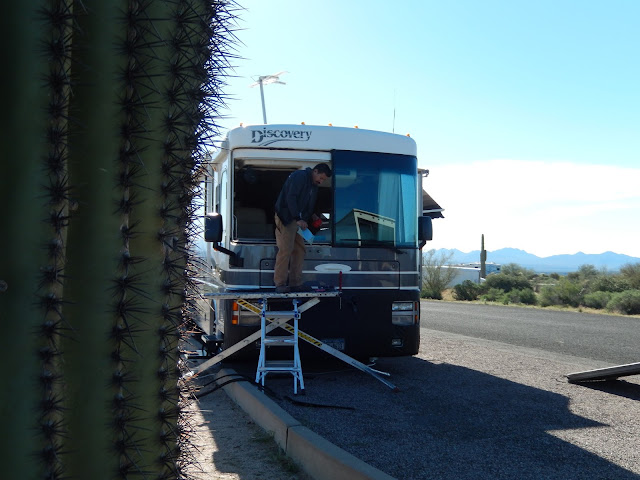 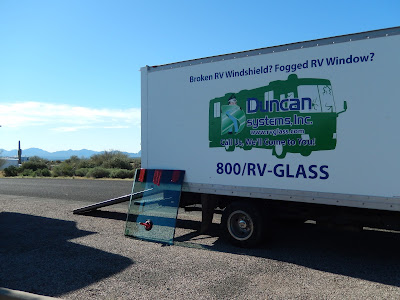 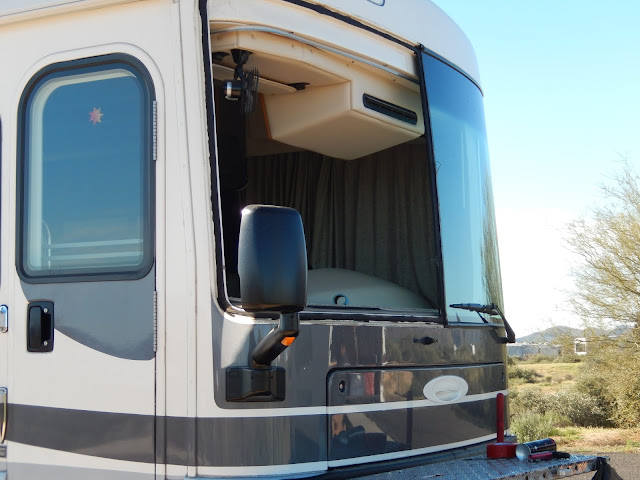 In no time at all Chris had Beluga's new windshield in place.   I must say, he was a delightful guy.   Friendly, competent and efficient with a winning smile.   Thanks Chris!

After he drove away we took poor Lew out and played fetch with his "fish" for a while to reward him for his perseverance.   He greatly appreciated it. 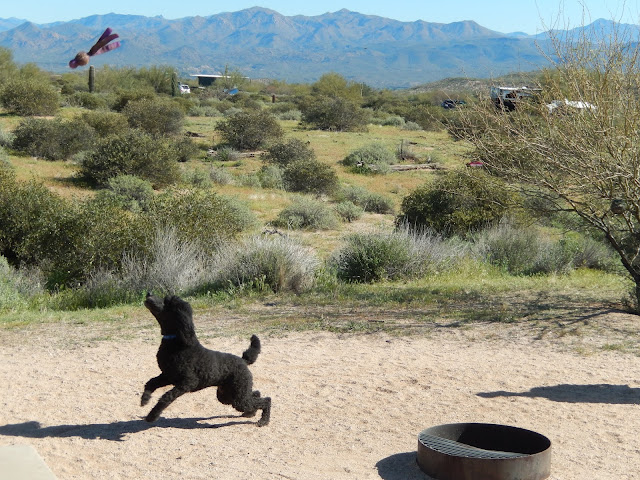 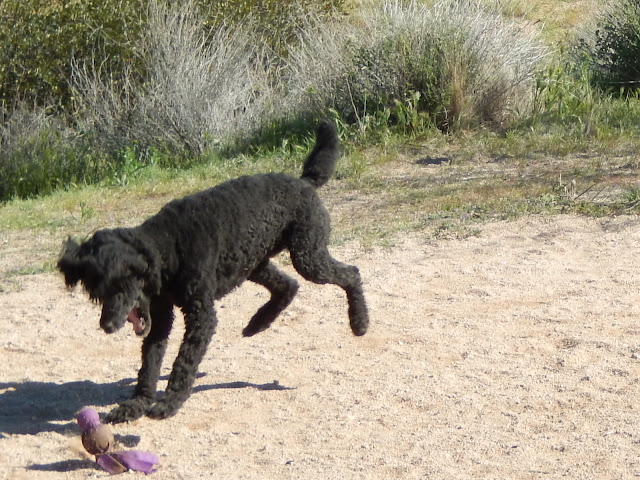 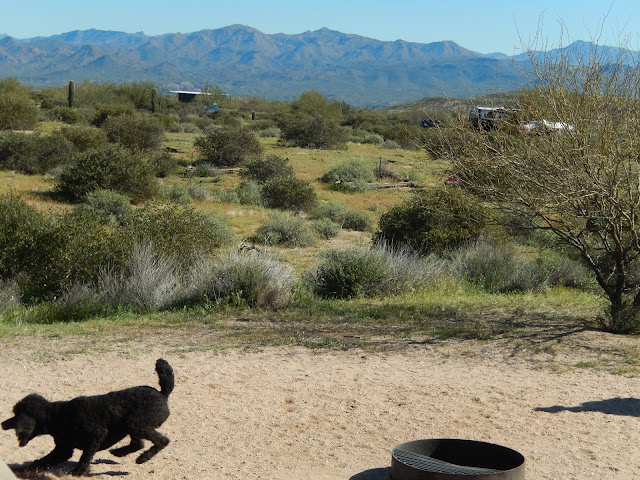 Tomorrow he has a grooming appointment with Mr. David's A-1 Mobile Grooming and Hair Salon and then a veterinarian appointment for an annual vaccination.    Shhhh, don't tell him.
Posted by Suzi at 10:51 PM