Yesterday was our last day in the Bluff area and we spent most of it at Hovenweep National Monument going back in time.

This area is about 45 miles north and east of Bluff so we were able to enjoy another the long drive through more of the desolate and spectacular countryside that has so captured us. 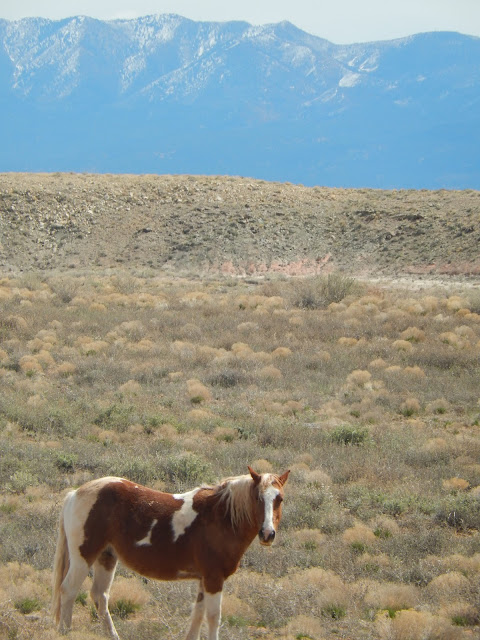 Lots of horses raised their heads to watch us pass by.   Perhaps they never saw a jeep with New York State plates slowing down to let them by. 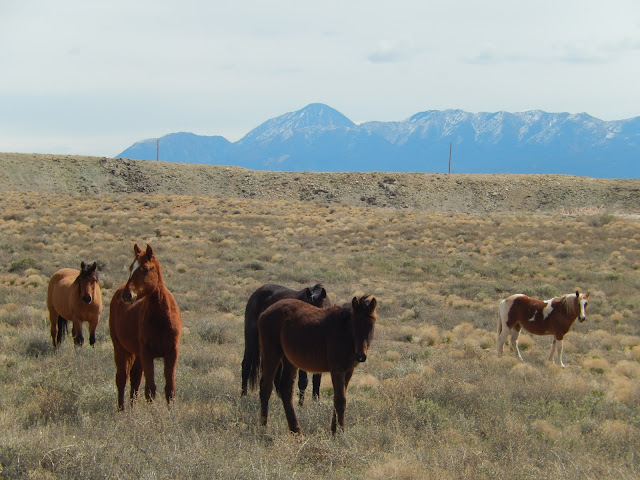 When I think of Navajo people, my mind always seems to form images of round Hogans, lone horsemen, turquoise and silver buckles and rings, intricate rugs and blankets, sandstone monoliths, and sheep. 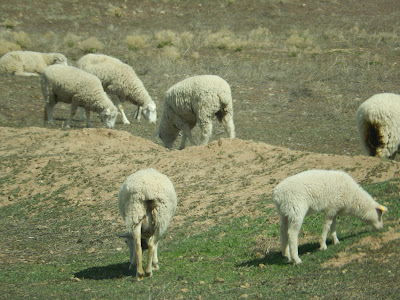 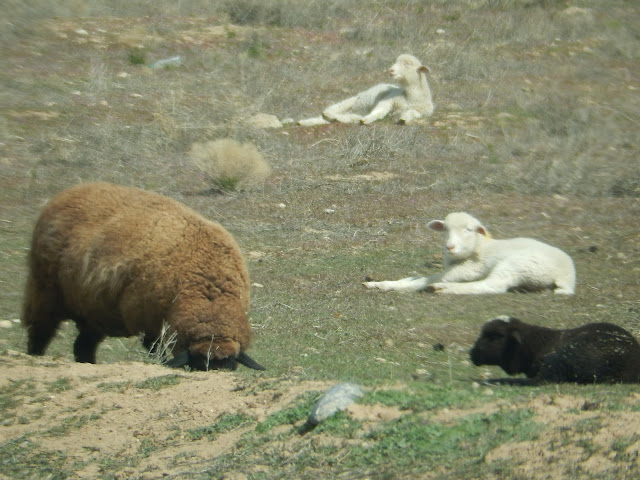 What I never pictured were the creatures that stopped our forward progress at the crest of a hill.


A small, motley herd of spotted asses!    We'd only seen one once before and that was carrying tourists on the beach in Scarborough, England! 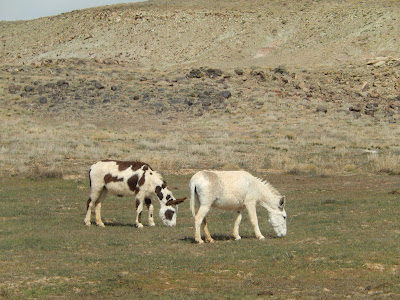 I wrote down the directions to Hovenweep from their website and Dave had programmed in the address on the jeep's GPS.   Neither directions bore any resemblance to the road names/numbers we were seeing so we just drove in its general direction and hoped for the best.

Eventually we arrived at the small Visitor's Center and had a delightful conversation with Geneva P's doppelganger.   She gave us an overview of what we would be able to see in the time we had and suggested we watch the short movie about the monument before we headed out.     It turned out to be a wonderful, fanciful movie about what we would see and how and why these buildings may have been built. 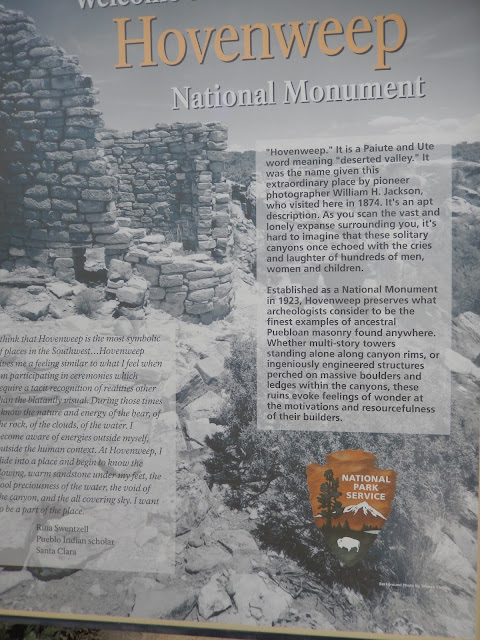 We chose a 2 mile hike around the rim of Little Ruin Canyon directly behind the Visitor's Center where we would be able to see the ruins of at least 9 building groups, either on the canyon's rim, perched on huge boulders and one actually inside a hollow boulder.


We decided to walk about a mile along the edge seeing what we could see in that distance and then evaluate the coming weather.    It was quite cold and mostly cloudy with a brisk wind and the distant sky was dark.


We found a smooth boulder on the edge, out of the wind, set out our lunch and sat quietly absorbing the spirit of the place. 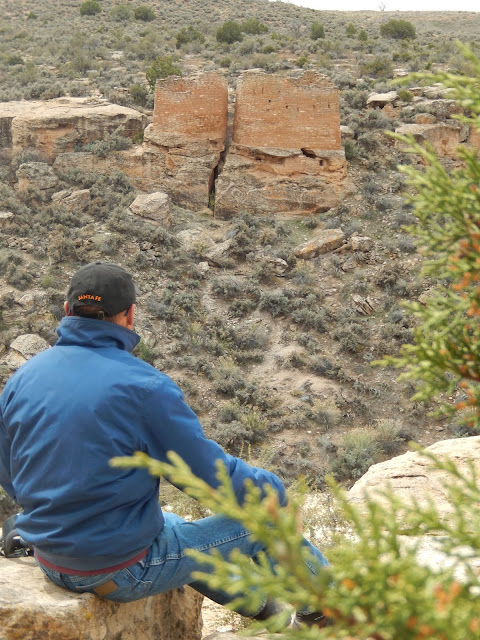 This park is very lightly visited and in the silence we were almost carried back in time.    Perhaps it was the suggestions in the movie we'd just watched, but we both felt the presence of the ancient people very strongly in these beautifully built structures. 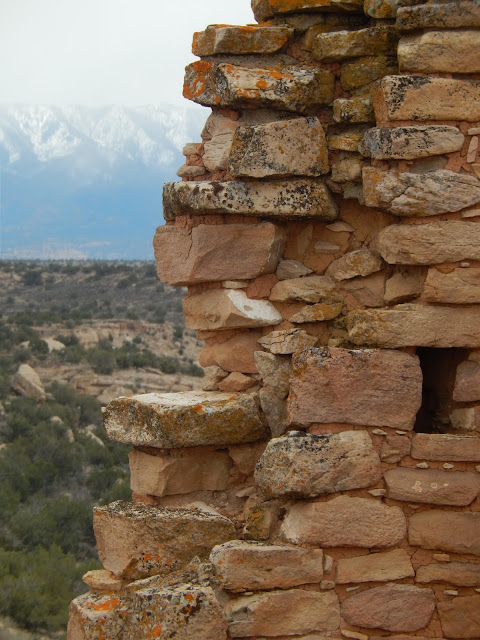 We couldn't turn back after we'd started so we just kept on our trail around the canyon rim.    There were a few people in view, far ahead but mostly it was just us and the wind. 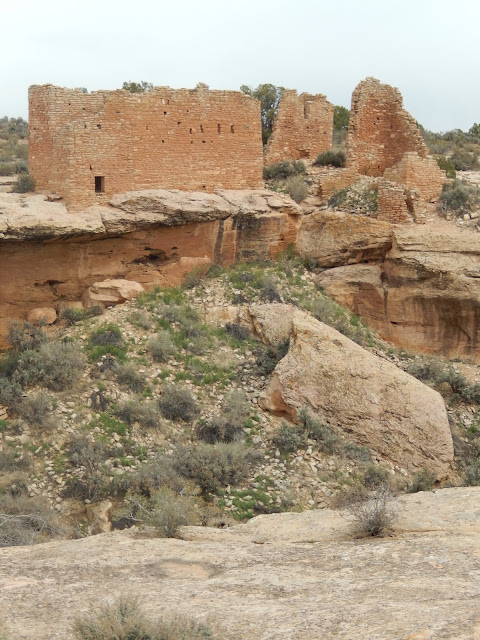 The trail follows the edge of the canyon, makes a loop out on a promontory to see Tower Point, then resumes its path along the canyon to a point where it drops  80 feet down to the bottom and as sharply back up the other side and back to the Visitor's Center.    By the time we got to the "down" area we could hear a small family with the clear voice of a little boy leading them.   The effort it took to get to the bottom and back up again, coupled with the loud chatter broke the mood and we were back in the present once again.   We had quite a day. 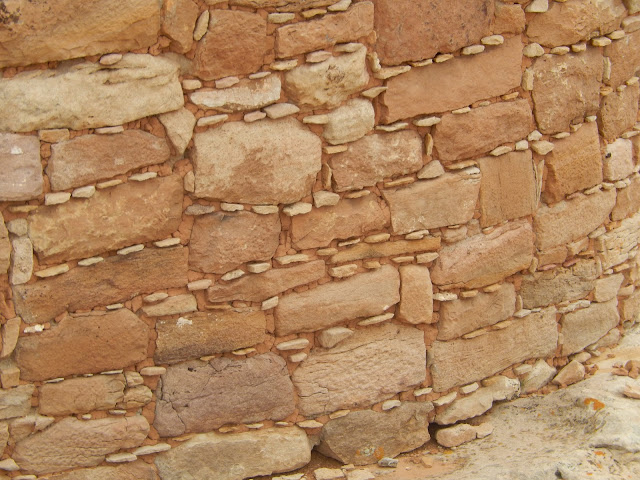