Last week we went shopping in "downtown" Moab.    We were casually looking for the usual touristy things, tee shirts, sweatshirts, etc.   We found a few that we liked and we also bought a book - Charles Wells Guide to Moab, Utah Backroads and 4-Wheel-Drive Trails.

We always like to get out and explore an area on roads less traveled (autohiking) and there are plenty of those here.   Our problem is that so many of the dirt tracks and roads heading off the paved roads lead to some pretty hairy places, places we can't go and places we don't really want to go.    This book has directions and pictures to those places, detailed mile by mile directions but it also has easy dirt and gravel roads that we can do. 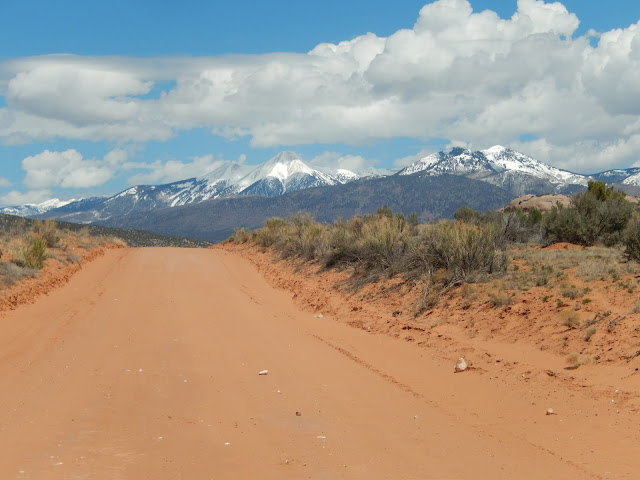 The road was wide and flat with only a little washboarding and the turn off to Looking Glass Rock just a couple miles down.

We knew we must have passed this rock on the way into Moab one rt. 191 weeks ago, but we didn't remember seeing it.   Things look very different from one direction to another.

There were only 2 cars in the parking lot, always a good sign.   We could see the arch begin to appear as we climbed the slickrock.    Some people call this Looking Glass Rock and some say Looking Glass Arch.   Is it a huge hole in the rock or an arch?   I don't really know the proper name, so I'll use either term interchangeably, as I seem to when I talk about it. 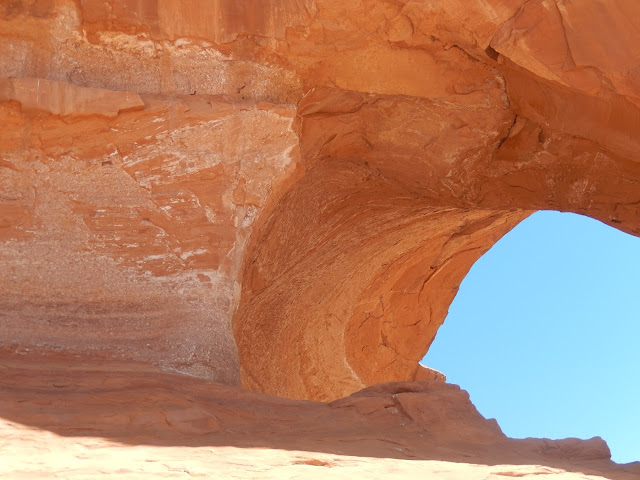 It was lunch time so Dave found a good sunny spot to sit and enjoy the views and the silence. 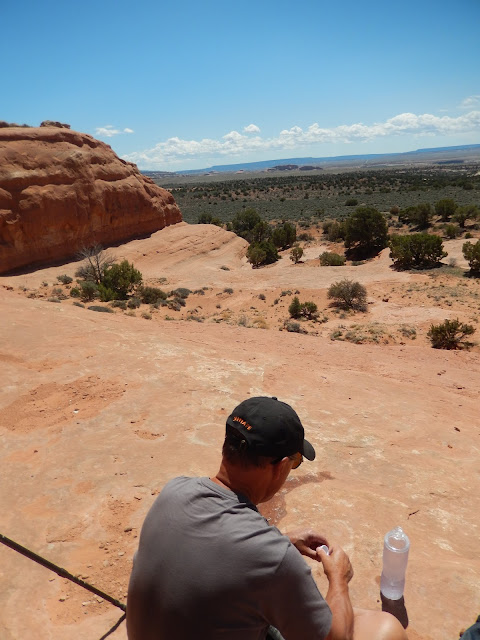 After a while we heard voices, and we wondered where they were coming from.
We figured they were from the folks in the other cars so we put away our lunch things and continued our hike up to the arch opening. 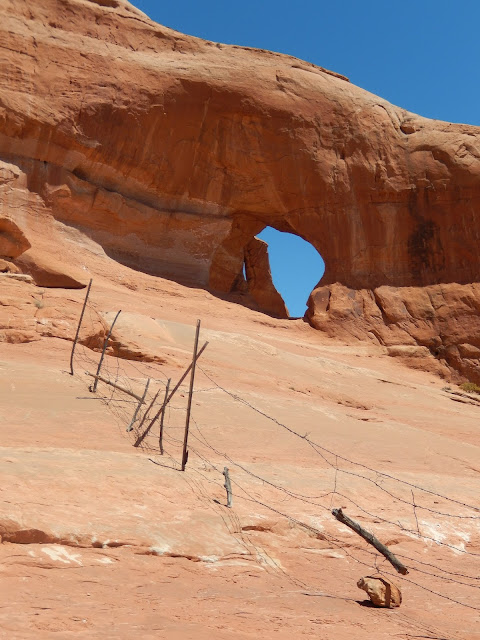 Ahead of me, Dave scrambled up into the arch to find he was standing on the edge of a high drop off, looking into a enormous amphitheater where a few people were free rappeling down from the top.   A man was photographing them from under the arch.   He and Dave chatted for a moment and he warned us that there was a "nest of rattlesnakes" sunning on the rock on the other side.   Thank you sir!

We needed to get around to the other side to see them (the climbers, NOT the rattlesnakes)  We tried crossing the slickrock incline, watching for snakes, but decided an easier path was through the low sandy ground  and around the end of the rock formation to the back side. 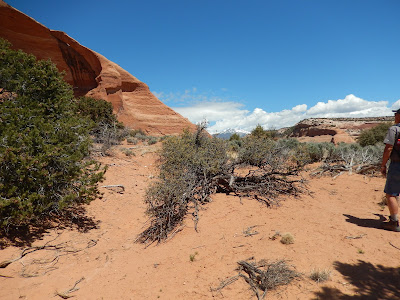 Once we got around I was shocked to see that most of the entire rock was hollow, a giant amphitheater.


We could see the people standing on a rock ledge inside watching one person dangling down from the very top, through a small crevasse.   They were cheering for him and he appeared to be enjoying every minute of his descent.

Dave stopped dead in his tracks and quietly asked me if I wanted to see a rattlesnake.....at that point you will understand that we both turned - slowly - and retraced our steps away from the snake.    Enough of Looking Glass Rock for me!

We took a slightly different route back to the car and picked up the book's instructions for the rest of our drive.

We passed some interesting looking,  obviously abandoned cave houses that we pulled over and checked out - from outside of course. 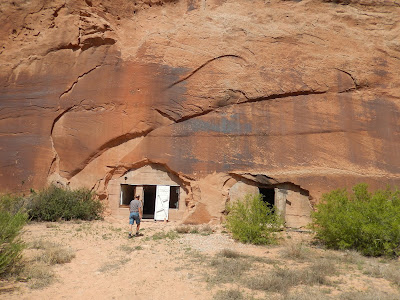 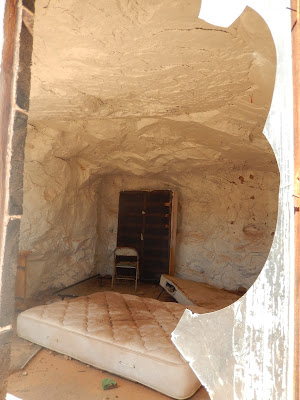 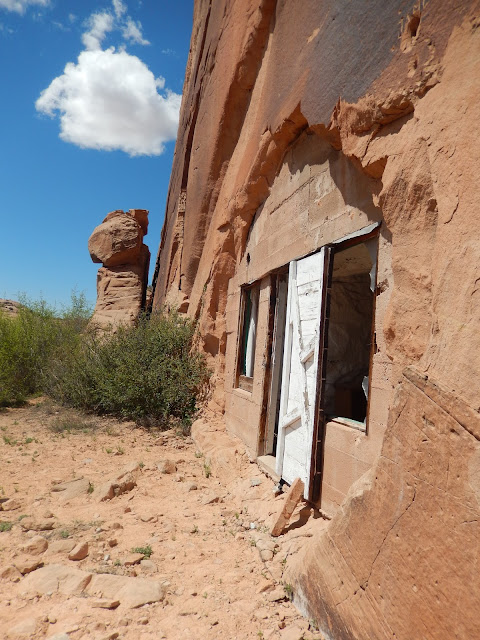 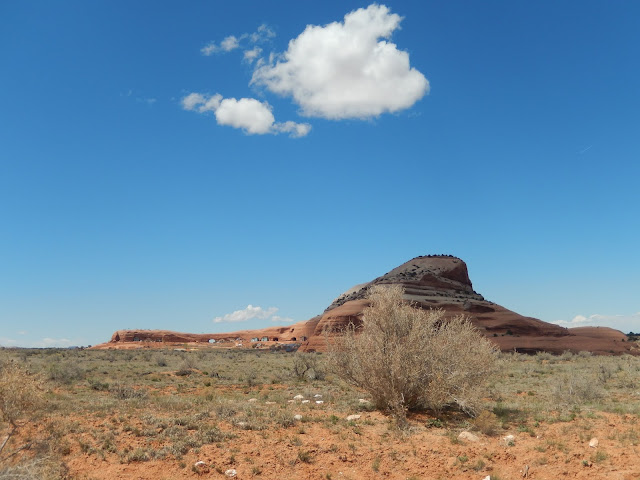 we passed an interesting rock formation that looked like it had a little colorful community snugged up into it. 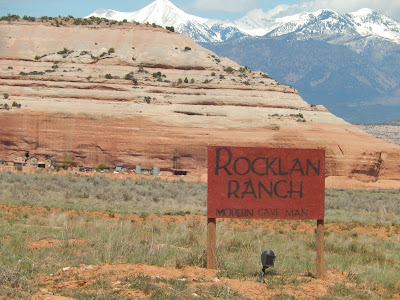 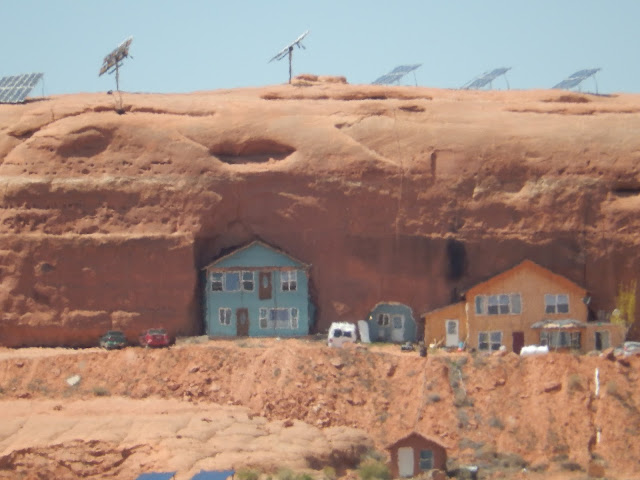 With my camera zoomed in I could see that the houses were not only snuggled up to the rock, they were built into the rock....with their antennas and solar panels on top!   Very interesting and colorful!   I did a little research on the Rockland Ranch and discovered that it is a polygamist community founded about 35 years ago. 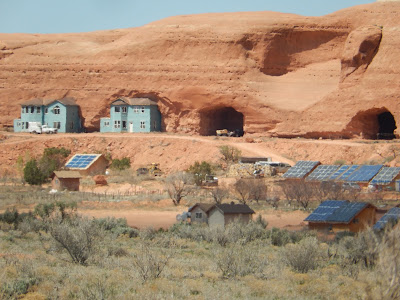 Continuing along we found our turn for the Overlook.   There were lots of great looking boondocking spots along the cliffs on our left.   Not for me, of course, but for someone with no fear of heights....

Once again, there was only one other car at the spectacular overlook.   I love it! 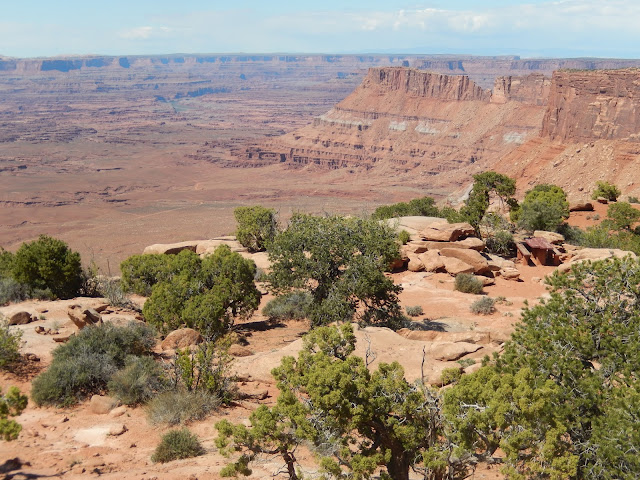 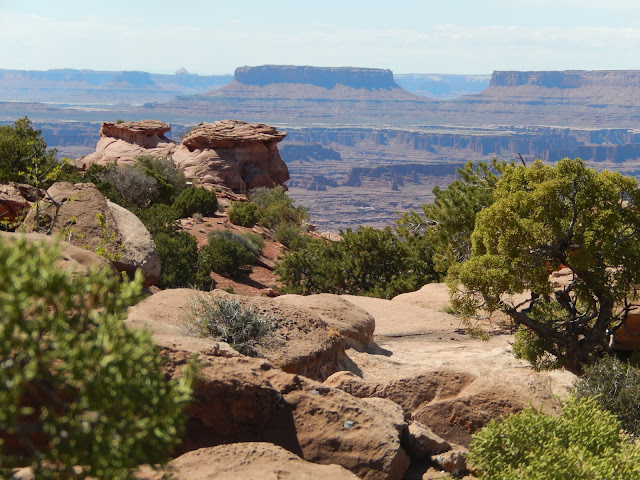 There was a fence in one area and it made me slightly brave so I looked through it at the sandstone spires below....they look different from up here!


Phew!   I used up all my "brave" so we decided to call it a day and start for home.

Once back on route 191 we were determined to see Looking Glass Rock (Arch) from the highway, the view we'd missed on the way to Moab at the beginning of our stay.    We also were on the lookout for Wilson Arch which evidently is right off the side of the road - we missed that one on the way in also!  Where were we looking, what were we doing?

Knowing what we were looking for made it much easier to spot the hollow backside of Looking Glass Rock in the distance.

And Wilson Arch showed itself larger than life as we passed it this time! 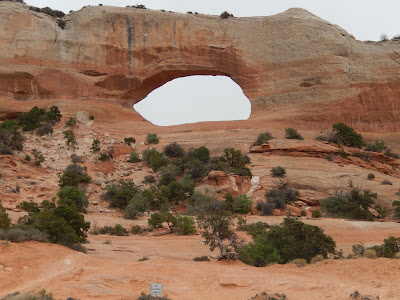 Yesterday was a fun day.    Just meandering along the back roads seeing what we could see..... 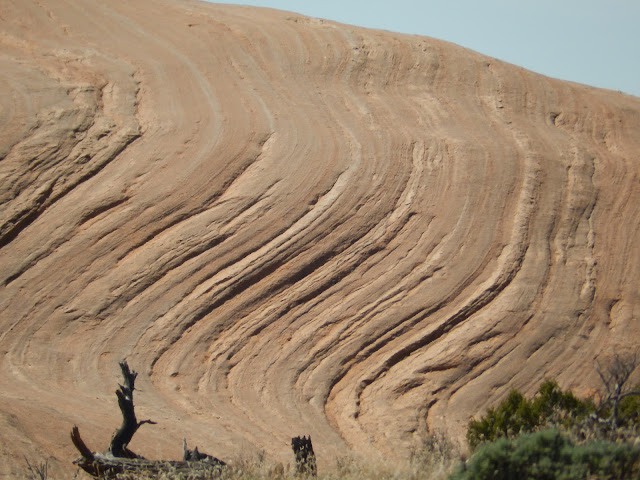 Are you tired of rock pictures yet?