Our weekend was a wash.   The weather was cold, very windy and wet.   We did nothing blogable, nothing interesting in any way.

Yesterday Pam and John took us on a great hike to Corona Arch.   This was their third time visiting this beautiful area, they are great ambassadors!   Pam knew we'd love this hike and was afraid we wouldn't do it on our own so they gathered us up and patiently lead the way.    We're very grateful as this was my very favorite hike.   It was just my length - 3 miles out and back,  fun topography, new things to do - short run of moki steps and small ladder, and an unbelievable payoff at the end - two arches set in the most stunning scenery.

We started out by crossing a railroad track cut deeply into the red rocks. 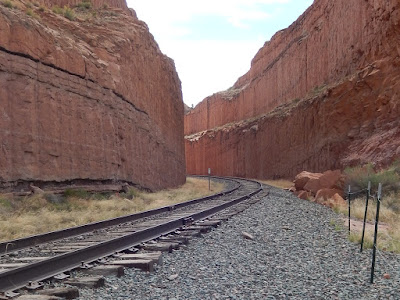 We actually found a relatively hidden arch on the way out to Corona, one Pam had been searching for!    It was high up on the ridge opposite of the trail and we almost missed it.   I'm sure it has a name, but I don't know it. 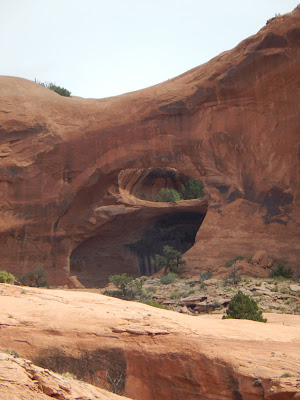 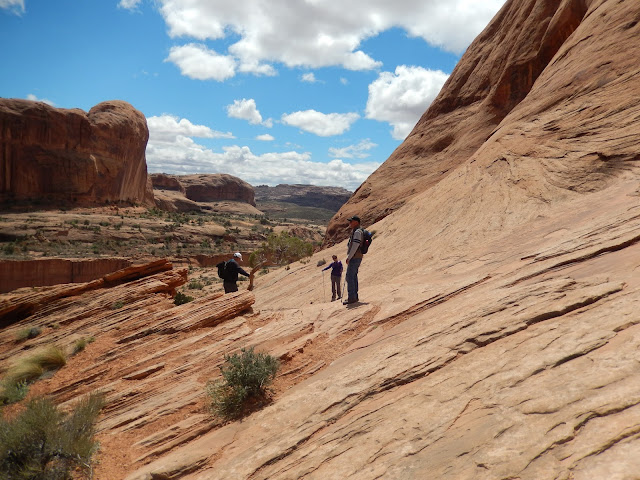 The weather was cool and warm at the same time.  In the sun and out of the wind we were warm and comfortable but around every bend the cold wind found us and made me zip my vest up tight against it.    Perfect for being outside, really. 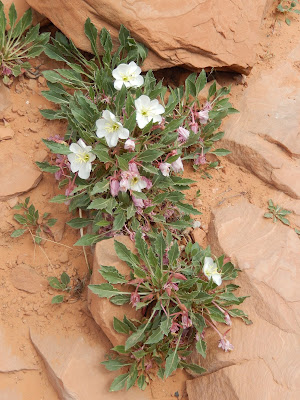 The scenery was grand all around us and underfoot the tiny flowers quietly vied for our attention. 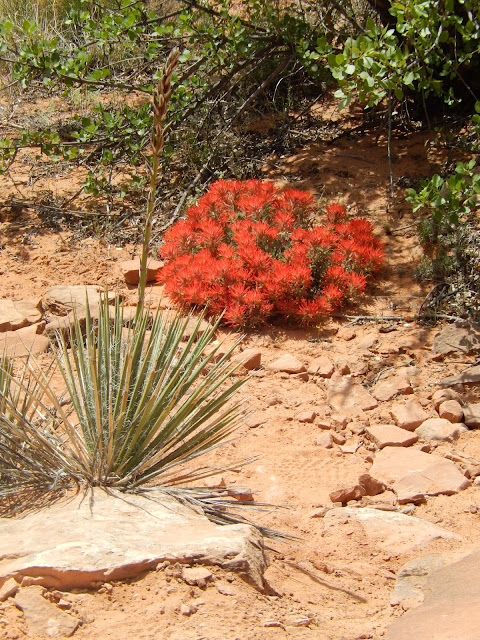 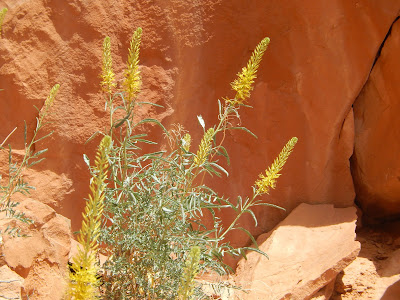 Some of the trail was sand, some slanted slickrock, some rock and sand jumbled together.    A little up, a little down. 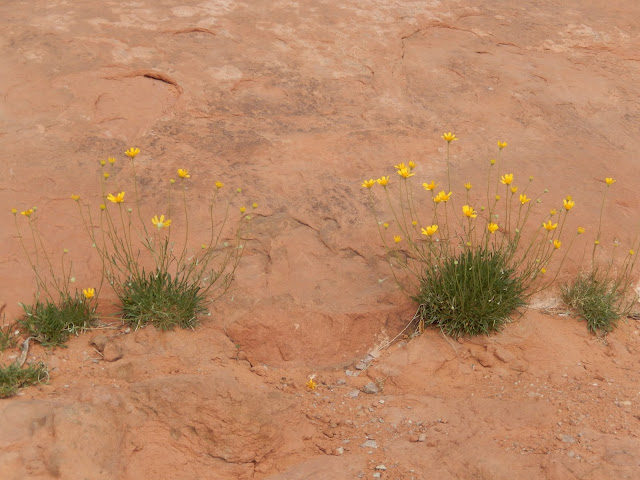 We got to a point where there was a set of moki steps cut into the sandstone to provide foot and hand holds as aids to a steeper ascent/descent.

John and then Pam went up first to show me the best way to use them.  There was a thick cable next to the steps as an additional climbing aid, but one section was broken.     Piece of cake for John and Pam, I'm sure but it was a first for us. 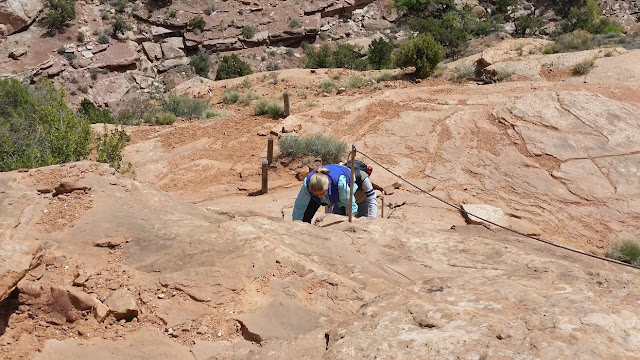 Dave followed very closely behind me, perhaps to break my fall, or perhaps I wasn't going fast enough!   At any rate, there weren't many and it turns out it wasn't hard at all.

Next was a small ladder to help getting up and over little rise.   John walked  around it on the slickrock but Dave and I chose to use the ladder. 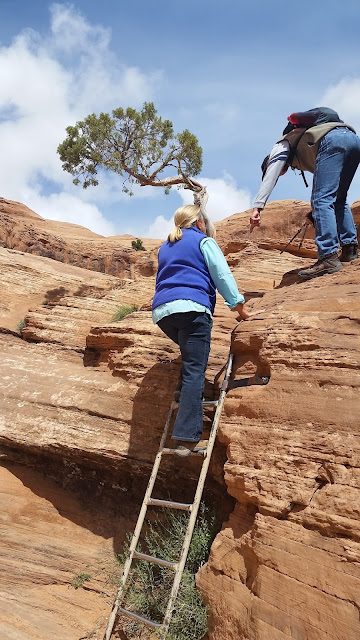 Once we finished with all the upping, we were treated to panoramic views of the cliffs, canyons and Bowtie and Corona arches.

Pam, John and Dave would often hold up and wait for me to catch up.  I'm not into the hike for the hike alone....I'm completely taken away with the scenery and find myself stopping often to just absorb it.    They are too kind. 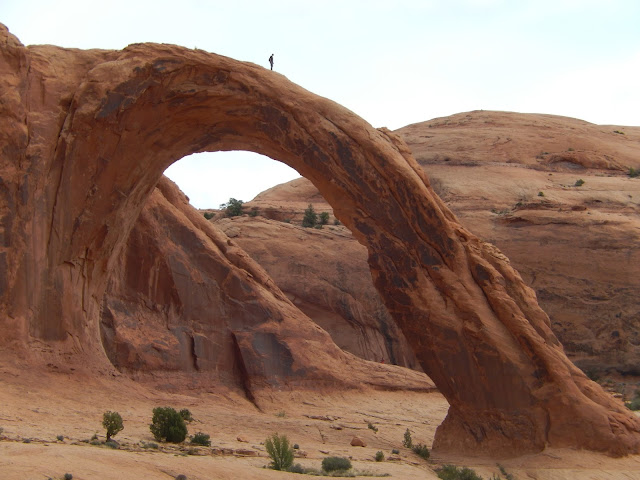 Once Corona Arch came into view we realized that there was a man on its very top.    We couldn't take our eyes off him....was he going to jump, fall, how far would he go?    Phew, he didn't go much further than you see in the above picture before he turned and disappeared the way he appeared.

John and Dave climbed up into the bottom of Bowtie arch to serenade us in the echo chamber, but Pam and I stayed back and investigated the tiny plants that were growing on the wall in the water weeping from the bottom. 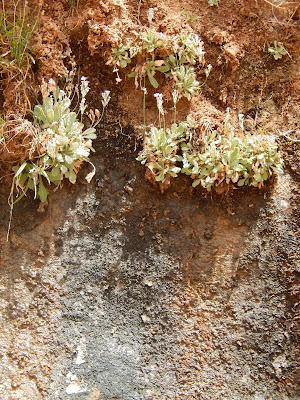 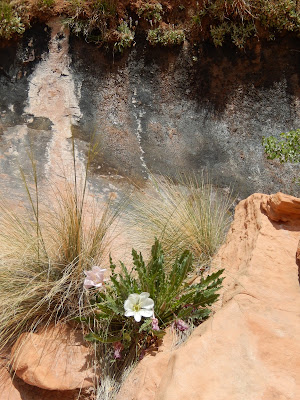 The trail was marked with small cairns to show the way but in one wide spot people had built hundreds of them on the edge of a cliff.   Like a little futuristic city in the sun. 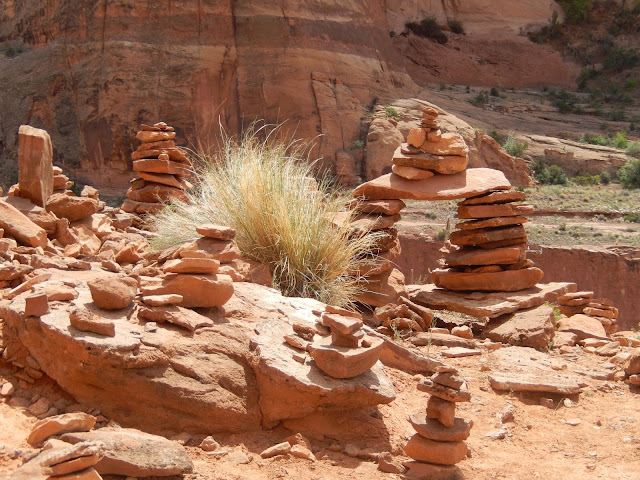 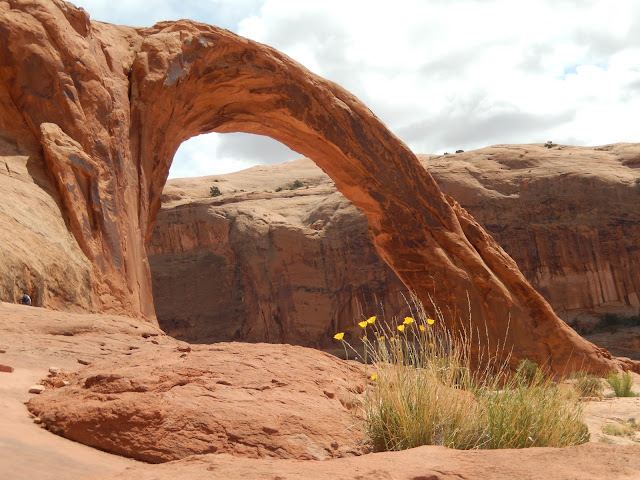 We hiked up and under Corona arch to it's other side for a lunch in the sun with a view. 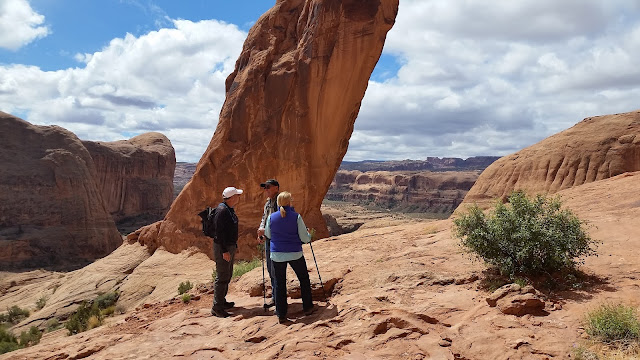 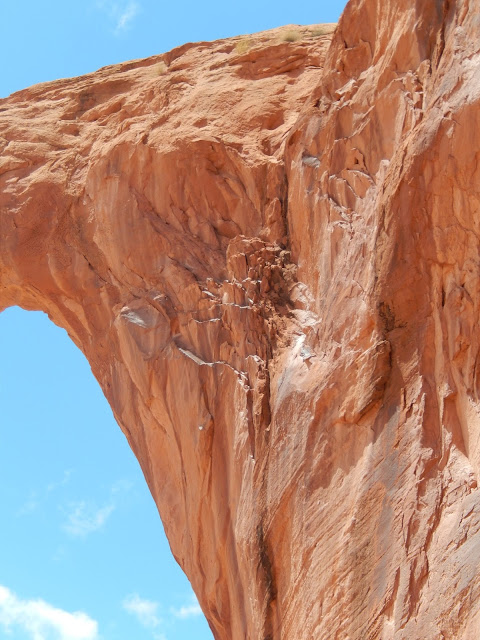 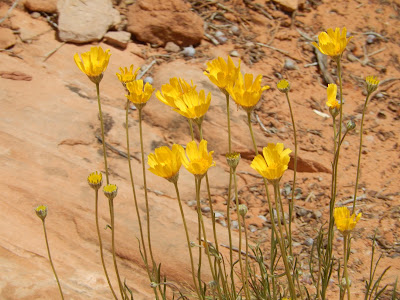 After lunch we retraced our steps back under Corona arch, past Bowtie Arch, down the ladder, down the moki steps, across the slickrock, past the cairn city,  up and down the rocky trail, over the railroad tracks and back to the jeep.     Pam had one more stop for us..... 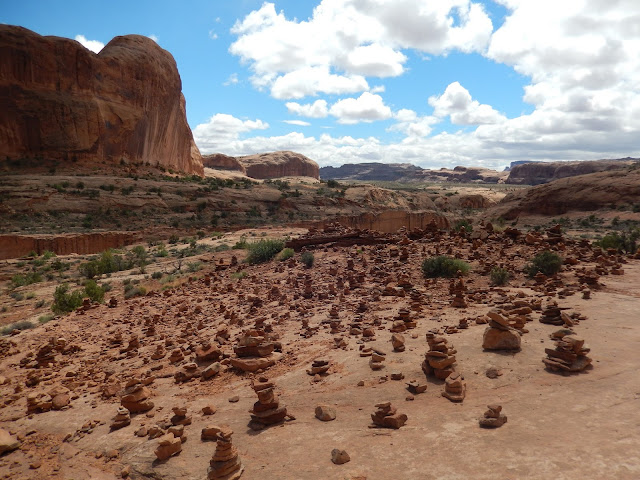 Our next project was to locate the exact place the famous last scene in the movie Thelma and Louise was filmed.     We were looking for the cliff we watched them race their Thunderbird convertible toward, clasp hands and then drive off of  at the end of the movie.      Pam thought she knew where it was, and had a photograph from that last scene in her pocket to help. 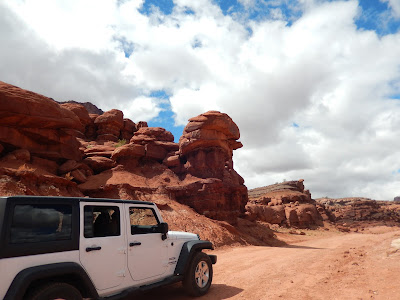 We drove out Potash Road, past the Potash Mine and its evaporation ponds and up into the red sandstone cliffs near the base of Dead Horse State Park.

Open range once again meant we could expect cattle or horses to be wandering around anywhere but we only saw one.    Our presence startled her out from behind a bush and she ambled slowly across the road and continued on her way.
We understood why she was alone as she walked away from us.....she was clearly in the process of calving.      We watched til she went behind a small knoll and we wondered if we'd see her again, perhaps with a newborn at her side, on our way back.    We did not.


We arrived at the point, high above the Colorado River, that Pam and John were both sure was THE spot.   Once again, no guardrails, ropes, walls or signs of any kind warned of the incredibly steep drop off on three sides of us. 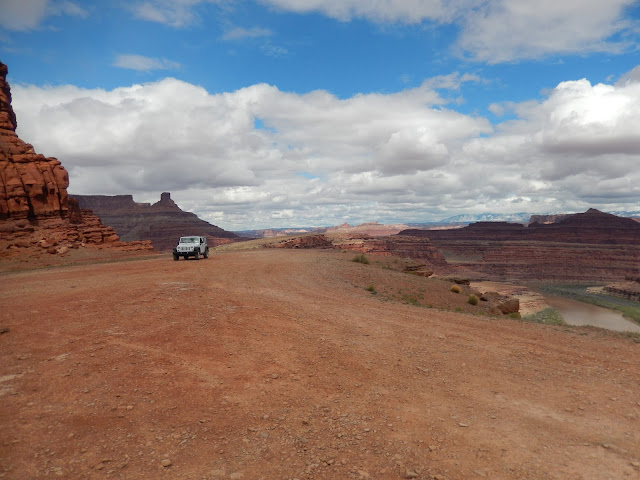 I crept about cautiously, staying very much in the middle of the roadway as the three of them walked confidently out on a point. 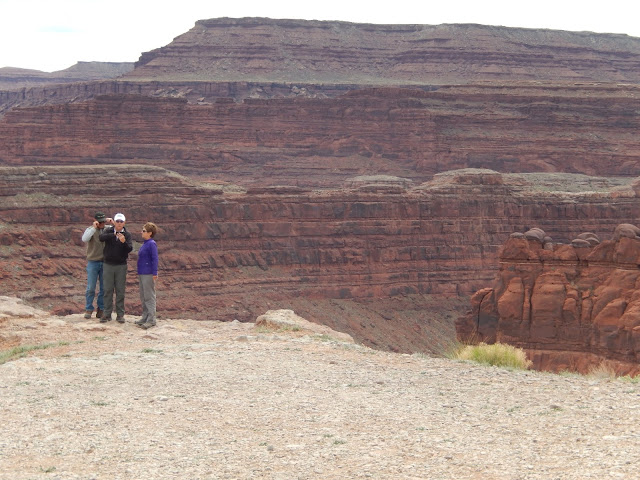 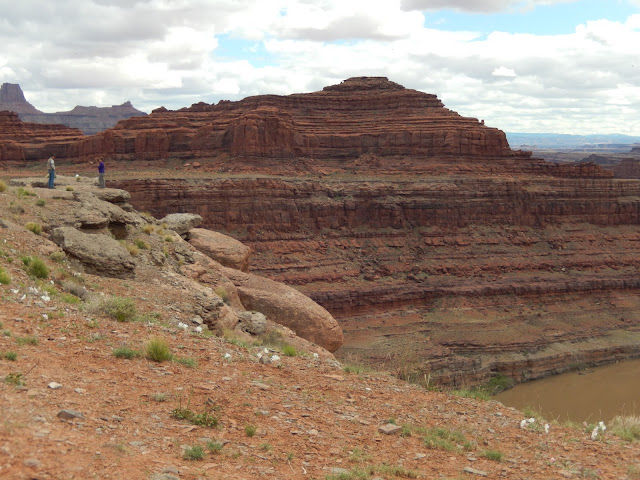 After much turning around, looking up, pointing, looking down and consulting the photograph they agreed that they had indeed found the exact spot.    Not only the spot where the car plunged over the cliff, but the probable spot the cameraman chose to film it. 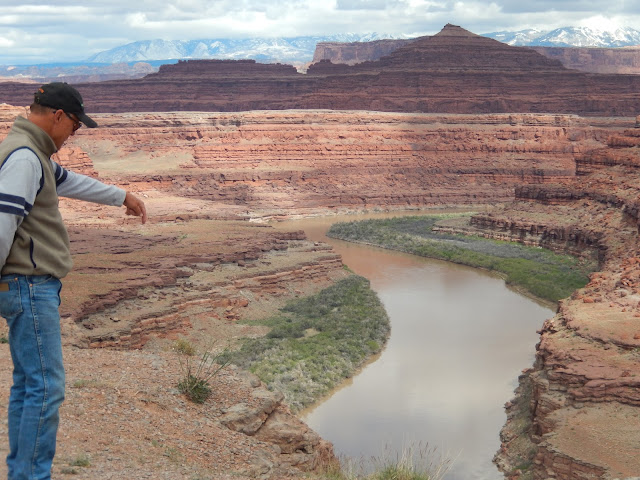 Finally satisfied we climbed back in the jeep and rode quietly back home for dinner. 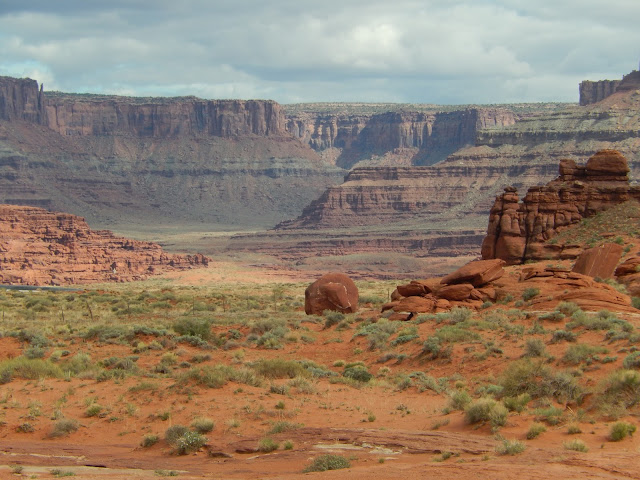