Note to self....do NOT drive Beluga when a high wind advisory has been posted.

We left Chatfield State Park this morning about 10 a.m. with Trinidad State Park as our destination for the night.    It was windy but nothing Dave couldn't handle.

The further south we drove, the stronger the sustained winds became.   To say nothing about the gusts - oh the gusts.

Its been a nasty day of driving.   We're in for the night, safe and sound, at Lathrop State Park, near Walsenburg Colorado, just west of I-25.

Our day began to go pear shaped as we passed through Pueblo.   I could see a huge wildfire starting to our west near Beulah.

Dave and Beluga were fighting sustained winds of at least 40 mph with higher gusts slamming into our front passenger corner every few minutes.    I could see it was a real struggle.

Once we could safely pull over Dave discovered that two of the snaps holding the bra in place had come loose and were banging and flapping on Beluga's nose.
Lovely chunks of paint were dug away each time the snap hit the front cap.   Grrr.      Dave managed to get the bra off and stow in a compartment without it flying away to Kansas and we continued on our way.

Then the bedroom awning began to unroll, fly up over Beluga's roof and then slam back down again.    I could see it in my mirror.   We could hear it.


After a few miles we exited the highway in the middle of absolutely no where. 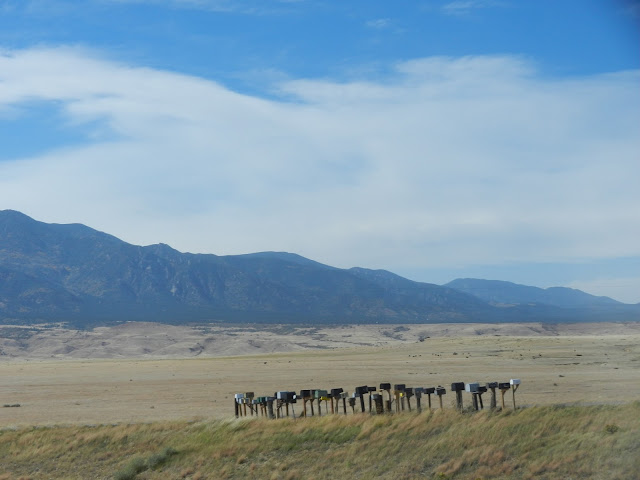 To make a long, scary story short, Dave dug the ladder out of the Jeep, set it up alongside Beluga and carefully climbed up with 3 bungies to try to strap the awning down.    My heart was in my mouth because the wind was blowing so hard that it took quite a while to just push Beluga's door open to get outside, much less stand on a ladder on the shoulder of the road.    I could just see him and the ladder crashing over any minute.   (I still took pictures, don't judge me)


After about half an hour of effort the awning was tentatively secured and we were on our way once more.      Pop!   A particularly strong gust hit us and we heard the bungies give up and fly off the awning.    And we were back at square one.

Do we turn around and head back to Colorado City?   The fire was growing stronger in the wind just west of us.     Do we push on to Trinidad (where we had a reservation) about 30 miles away?     The decision was made to try and make it to Lathrop State Park in Walsenburg, only about 10 miles ahead.    We hoped the awning would arrive with us.

I opened the Ipad to find directions to the park.   It was on the dashboard when another vicious gust hit us and it flew off, hitting Dave's beautiful new stool on its way to its final destination, the bottom of the stair well.   That could have just been the last straw, it really could have, but the thing landed unharmed,  still broadcasting directions.

So....tonight we're tucked into a nice site, snuggled behind some junipers and out of the wind.    Bellies filled with a good stiff G&T and yummy left over pizza, we're heading to bed.    Tomorrow is another day. 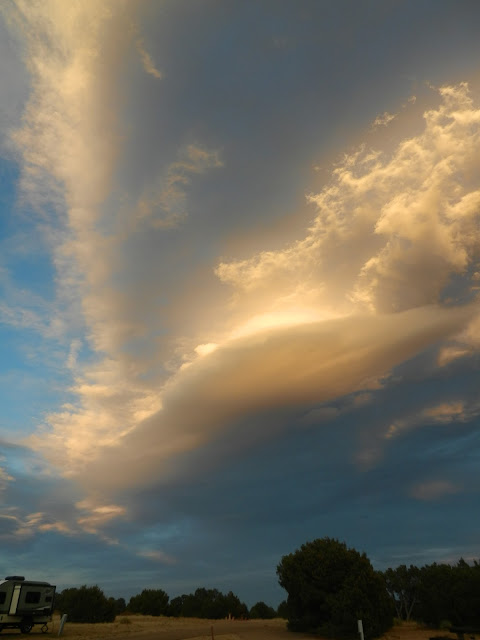