Everyone left.   Pam and John, Don and Carol all broke camp and were off to their next stops.    Dave and I spent the entire next day just sitting in the shade,  reading.  Fun to be busy and fun to be not.

Friday it was still hot.....we decided another day of auto hiking in the desert was in order.   We took the Arizona Benchmark map and pointed the Jeep toward Wickenburg to see where Gates Rd. would take us.    Oh, and possibly a quick stop at Chaparrel Home Made Ice Cream for a little sustenance.    Who knew how long we'd be in the jeep?

Gates road went no where.    It ended in a very sandy and dry riverbed.   We explored it a bit trying to find something interesting but finally gave up.

Next we drove back through Wickenburg and turned off on the very scenic Vulture Mine road.     Once again, the flowers were magnificent. 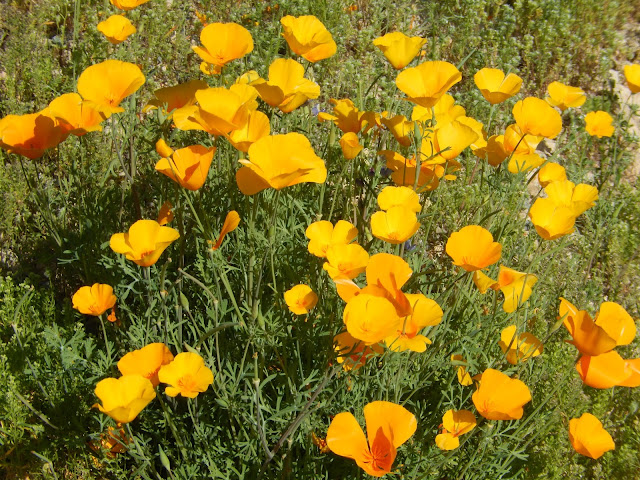 We stopped often to take in the views and to pick a flower here and there when we came across an unusual one.   By the time Vulture Mine Road turned to dirt I had accumulated a very nice little nosegay.    The orange globemallow had a beautiful subtle scent, but one of the purple ones I gathered made us think that we had recently cut an onion in the back of the jeep!    Ah well, it was beautiful so I kept it, we got used to the smell. 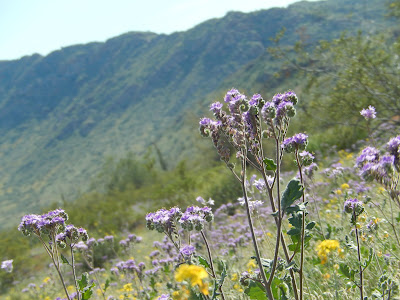 The Benchmark map showed me that Vulture Mine Road would take us to the Belmont Mountain Mine area before crossing the Central Arizona Project (large irrigation canal) and ending up near I-10 for about a 15 mile loop. 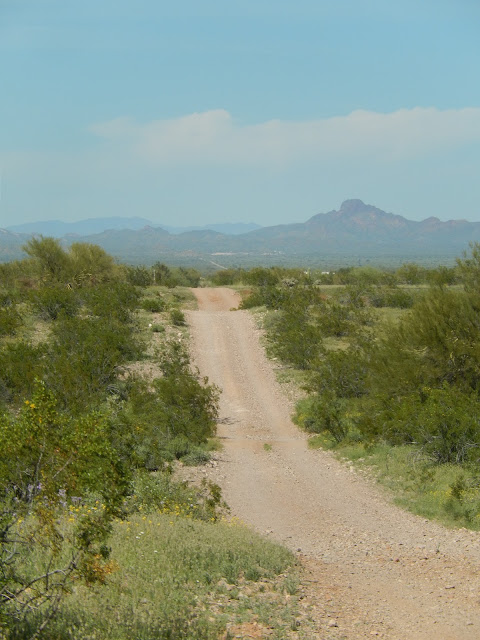 It was a beautiful drive through the wide, flat Hassayampa Plain and up into the mountains.   The road was graded for the first few miles but became rutted, narrow and rocky as we climbed.

I didn't take any more pictures, the road was too bumpy, but we continued on as the road became harder to see.    Finally we decided to turn around and head back the way we came.   If we knew for sure that the road continued ahead of us we would have gone for it, but without that knowledge we called time and were glad we had a fun ride.   We'll come prepared with BLM maps next time, the area is very interesting with lots of side trips just waiting for us.


After a bit of bumbling along on another dirt road which was listed as paved, we arrived home in time for our St. Patrick's Day Guinness stew.     Two roads to nowhere ended up giving us a most enjoyable day!

Today we washed and clipped Lewis.    He was really hot with his thick woolly coat in these temperatures.   He's much happier now.