Another week flies by

I'm not very good at taking pictures of people, posed pictures of people.   As a result, I have no photographic record of the Happy Hour we shared at Laurel and Eric's sweet Arctic Fox trailer on Tuesday night.    They were just a few sites north of us here at Catalina for a couple days and we enjoyed spending time and getting to know them better.    Lewis attended this Happy Hour he wants you to know that he really likes Laurel and Eric, Laurel even shared a brie topped cracker with him.

Wednesday night we met them at the yummy Vivace for dinner.   Each of us had something different and everything we ate was exceptional, even our shared creme brulee.     When we finally decided to call it a night we discovered that we were the only ones left in the entire large restaurant!    Guess we had a good time!    Again, no picture proof.

They decided to stay over one more day so yesterday morning we met them at the birding trail.    I have pictures!


We all share a love of birds so we enjoyed our walk through three of the park's different habitats.   Catalina is home to at least 150 species of birds and I was excited to add four new birds to my life list before we ended our morning. 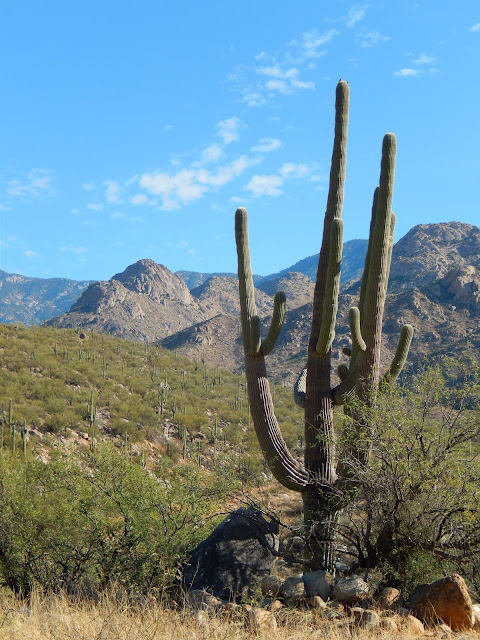 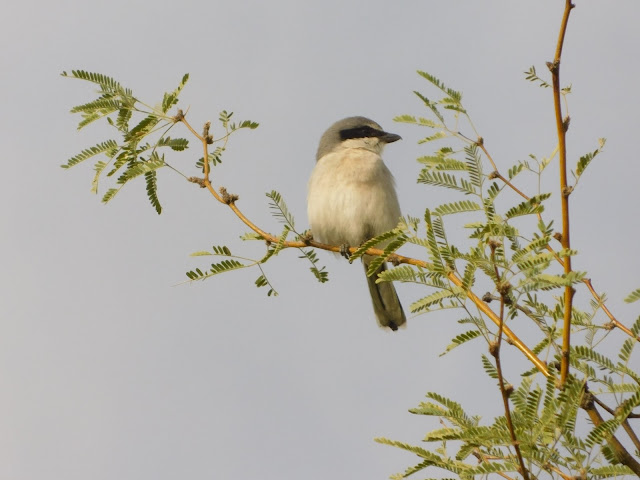 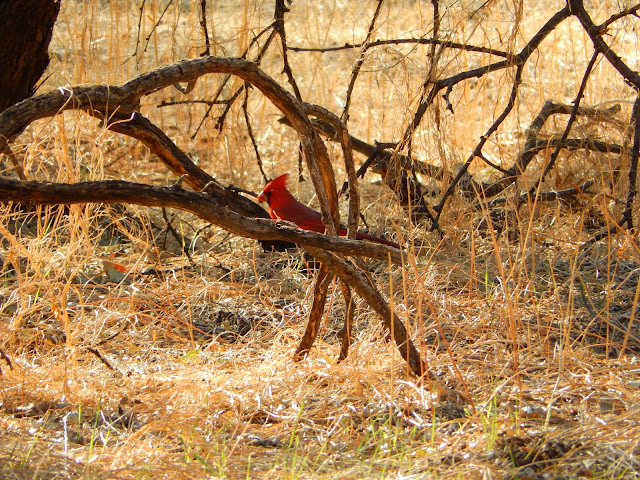 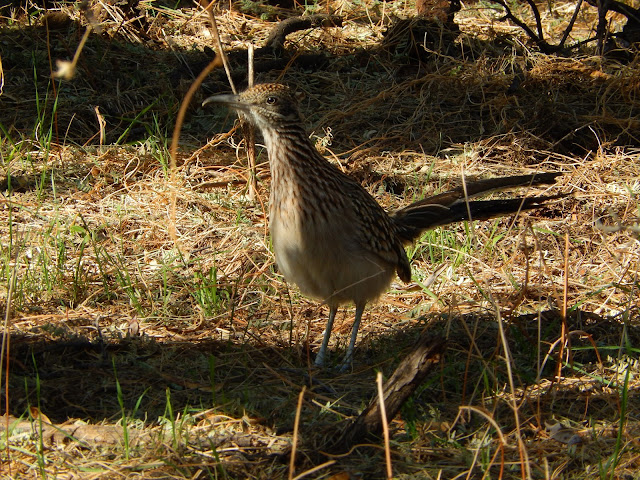 We'll have to go back before we leave next Tuesday because Laurel and Eric told us they saw a group of Coatimundi on the same trail later!

In between our socializing we resolved some minor but annoying problems, worked on a prototype for a possible problem when we're off roading and did a bit of exploring the area.


We, also, received a wonderful treat in the mail.   Our dear friend Judi sent her traditional box of Christmas cookies to us despite losing her dear mother just days before.   She's a special friend, a special person.


We take daily walks on the bridle trail behind our site.   Lewis looks forward to these walks and he especially enjoys sending many p-mails along the way. 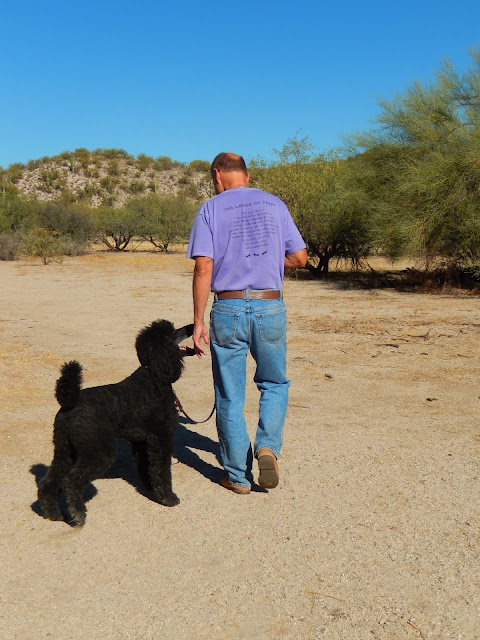 After we figured out how to get a State Land Trust Permit, we explored a few jeep roads north of the park.   We've never run into the need for such a permit but evidently they are necessary for a number of areas we were interested in. 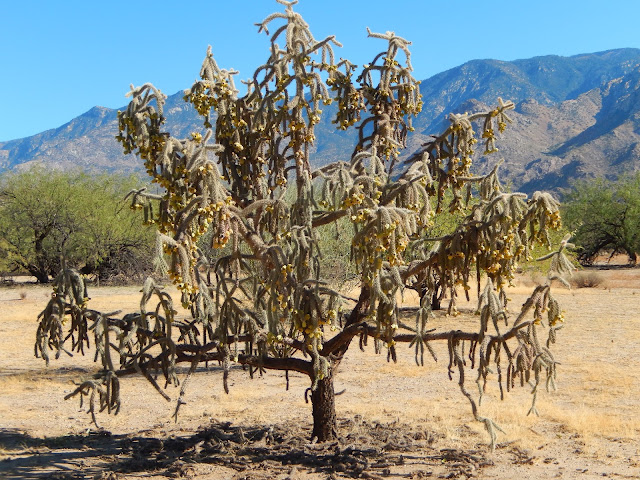 We had a great time on both excursions but were not, technically, successful on either.   The first, Wild Burro Canyon, was attempted with no map to guide us.  We had just gotten the Permit and were near the beginning point of the short trail so we just went for it.    Beautiful and interesting scenery to be sure, but we made a wrong turn right at the end so we never got where we were heading!   We knew we were off, and tried numerous side washes but ended up calling it and heading home. 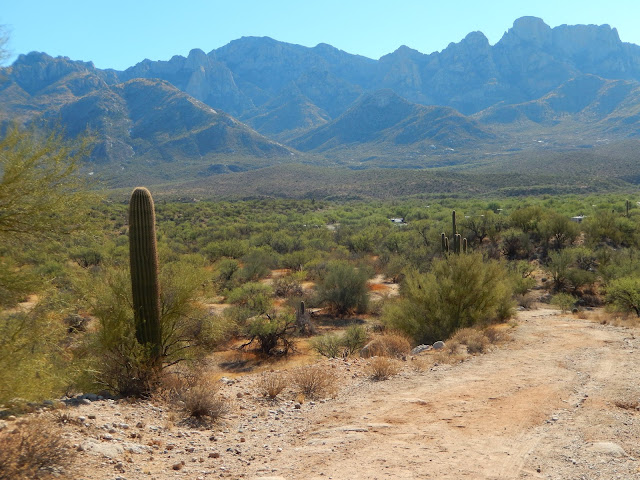 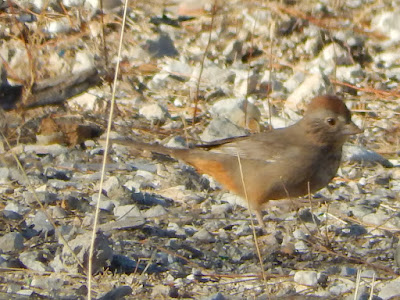 Today we decided to follow the Tucson Wash from Mammoth south to Oracle.  This time we had the "book" with us so we were confident we'd complete the ride.    We started out very well.

Down into the wash and under the old wooden train trestle. 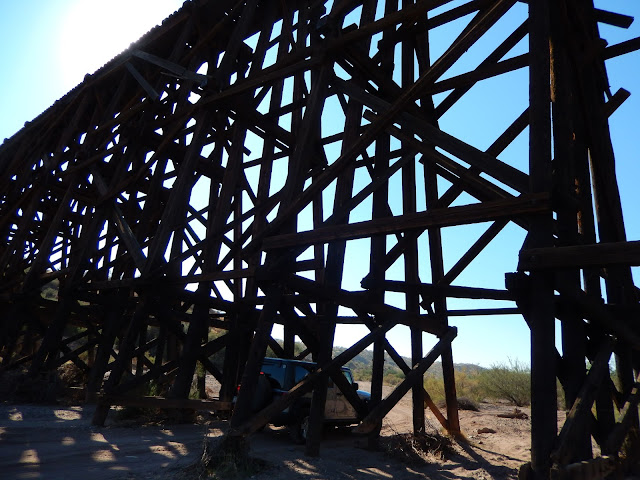 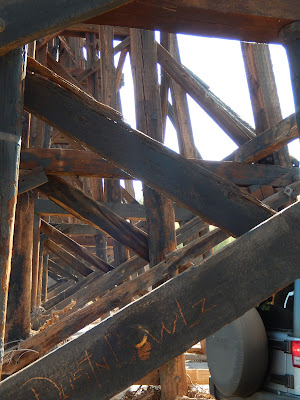 Through some beautifully colored rock formations studded with cactus. 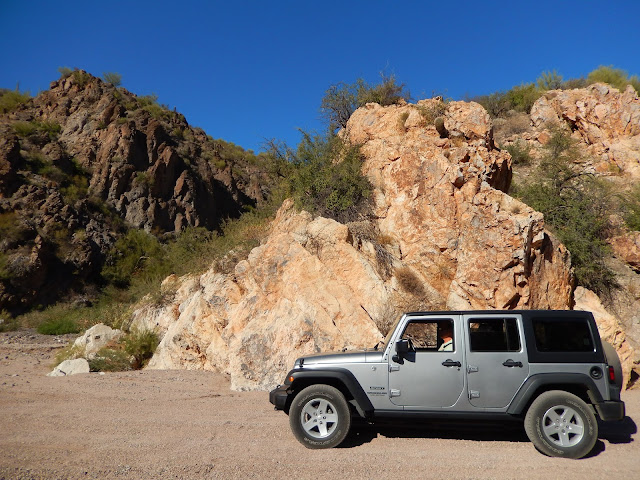 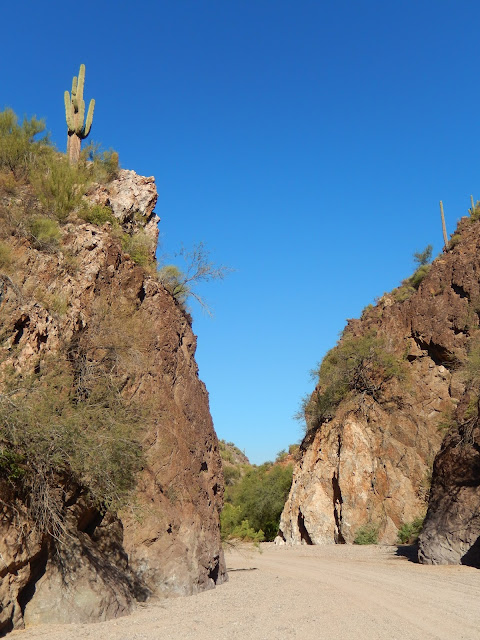 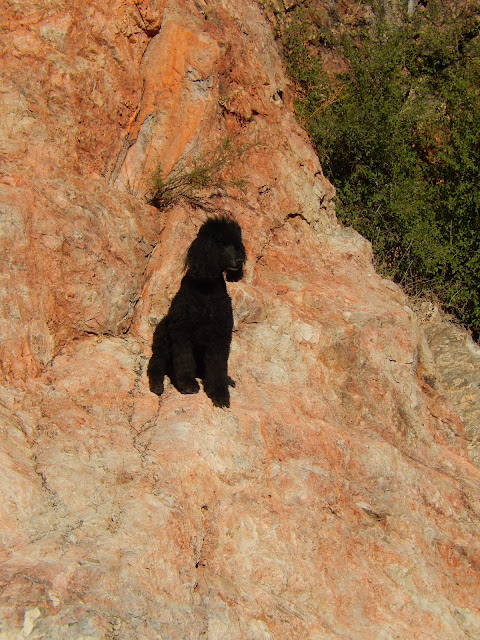 We decided to stop for lunch at the beginning of a short, narrow side canyon.   Before we ate Lewis asked if we could take a short hike to stretch his legs.


Instead of sitting on the lovely warm rocks (Dave noticed ants) we dug out our beach chairs and set up lunch in the sun. 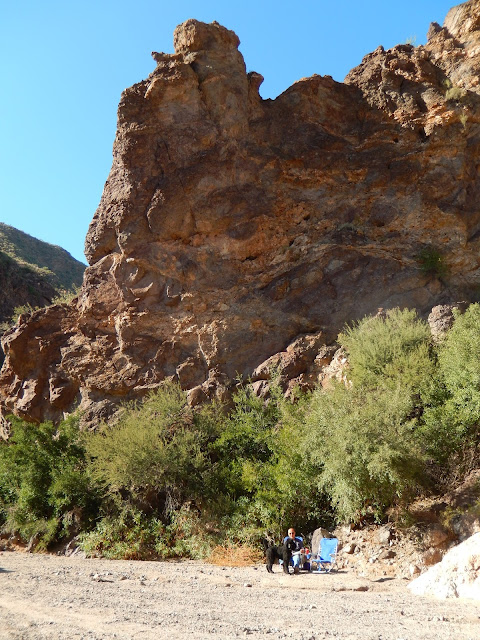 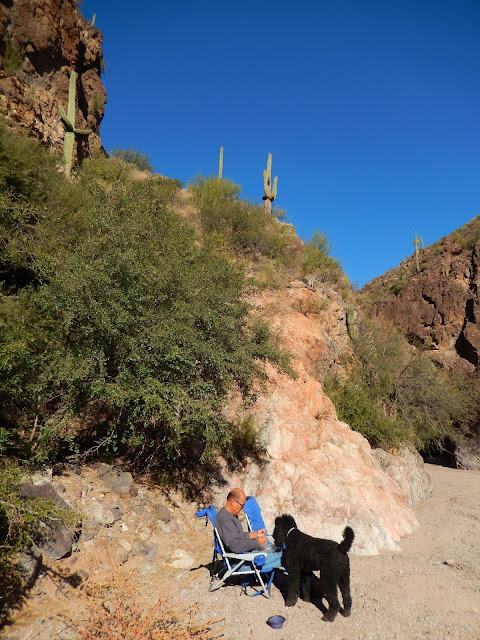 We always share our trail lunch with Lewis and today he decided that the tiny piece of Pringle I offered wasn't interesting so he dropped it in the sand.  In the blink of an eye a couple of those ants seized it and began to drag it away.   We were fascinated and watched them for a long time.   We gave them another crumb and they dropped the first one to drag the second away.   After hiding it in the shadow of a nearby rock they returned for the first piece.    Aren't we an exciting couple? 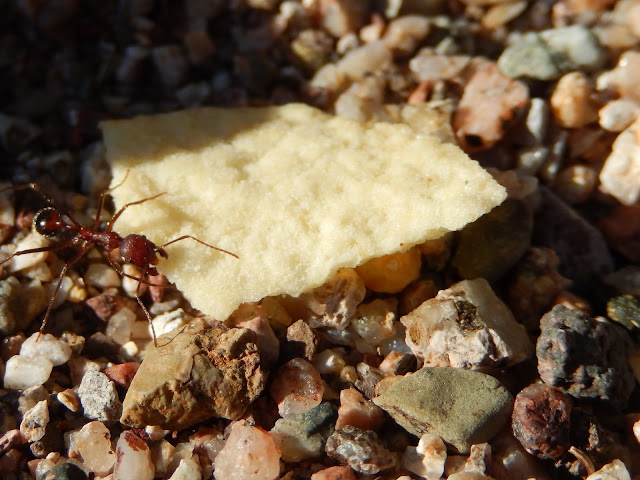 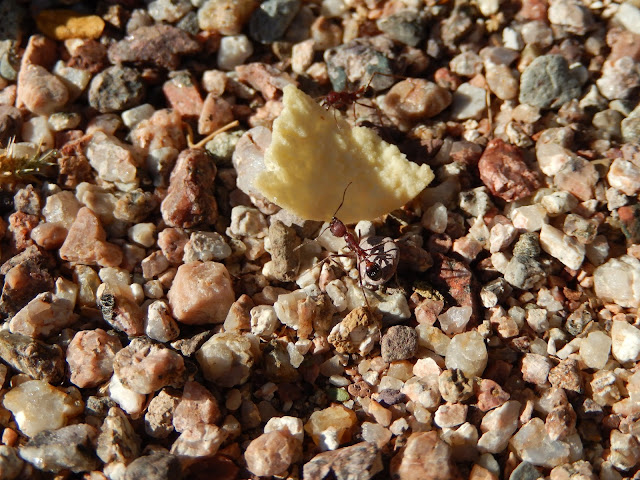 After our stimulating lunch entertainment we packed up and set off in search of the narrow box canyon ahead.   As I said, we had the book with what we thought sounded like simple instructions, complete with mileage and way points.

Not to be.   Nothing was where it was supposed to be.  We turned around to check, and then recheck.   Nope.   So we just decided to continue along the wash in the direction of home.   It had to lead somewhere, right?

It did, it took us right to the spot where the trail was supposed to end, near route 77 in Oracle. 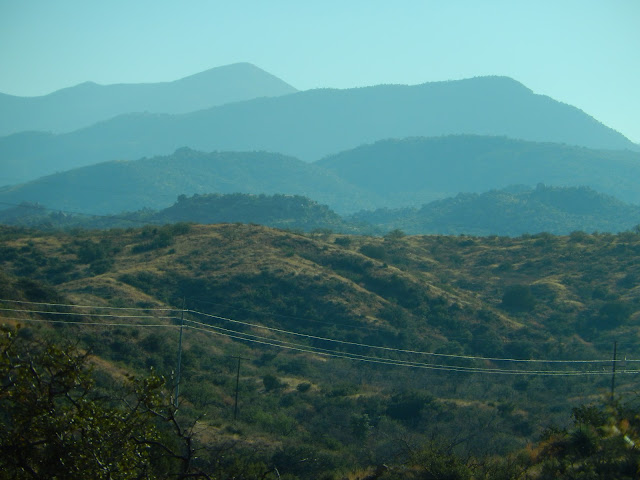 Except we missed the entire middle, the drive through the narrow box canyon and the high saddle viewpoint.   Neither of us know where we went wrong.....but we did.    I suppose the look of washes change with the seasons, the storms, the floods.   We'll try again next time.

It's the journey not the destination, right?


So, another week is behind us.   The temperatures are forecast to drop again tonight so our plants are safe and warm inside on Beluga's dashboard. 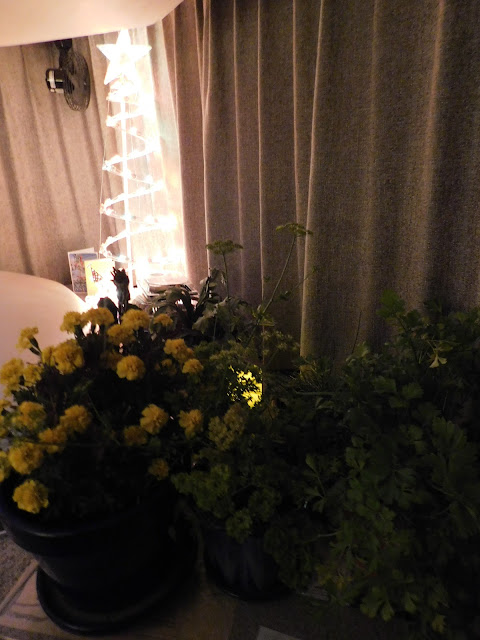 And sweet Lewis, exhausted from his running and climbing today, is snoring quietly on the couch.