a drive in the desert

Yesterday Jodee and Bill came down to Borrego Springs for lunch and a drive in the desert.   The six of us (the Banks, the Wrights and the Gravels) - or seven if you count Tessa - ate at the new restaurant in town, Keslings Kitchen.

Afterward Dave and I got into the Wright's Jeep and, with Jodee and Bill following, headed out into the Borrego Badlands and Font's Point. 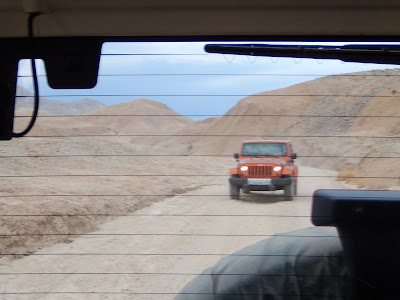 We've been there before but it wows us every single time and we wanted to share the views with the Gravels. 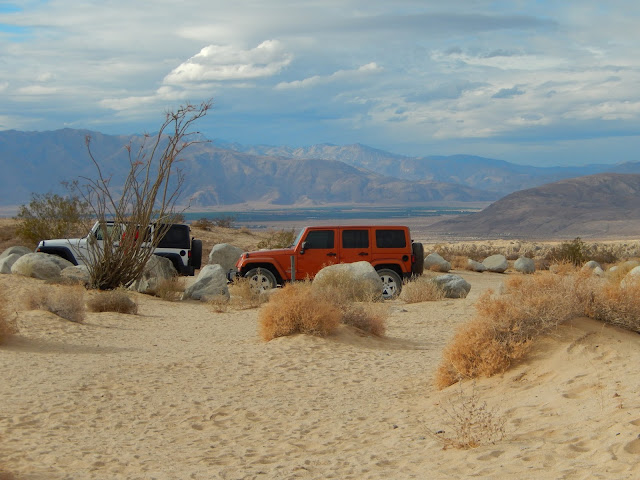 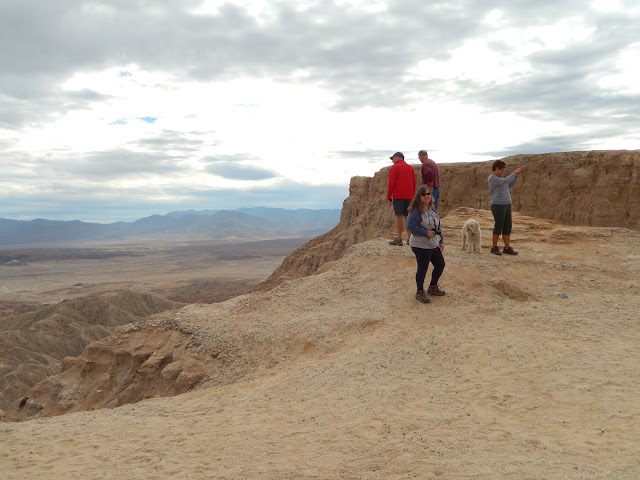 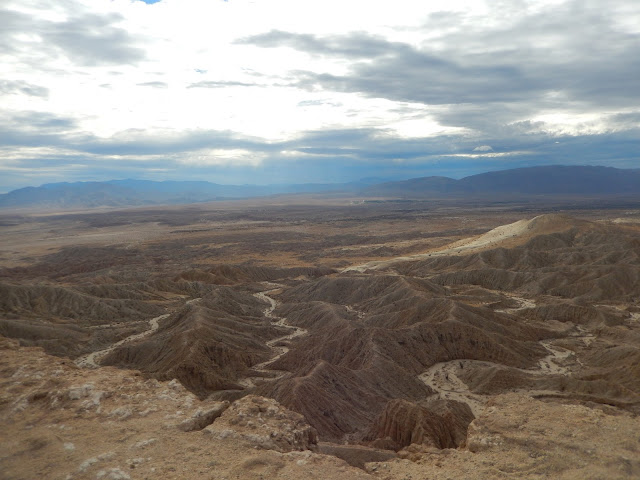 After the requisite oohs and aahs were offered we got back in our vehicles and went to look for an area called the pumpkin patch.

One the way we came to Five Palms.   We parked and the bottom to hike up for a closer look.   Very little grows in the badlands so these rare palm oasis are worth stopping for. 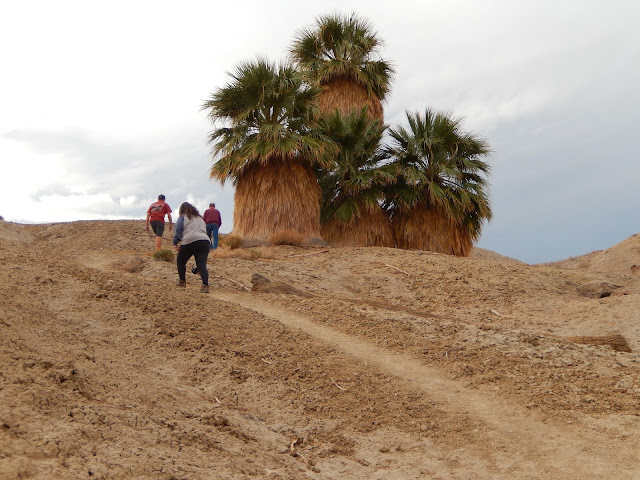 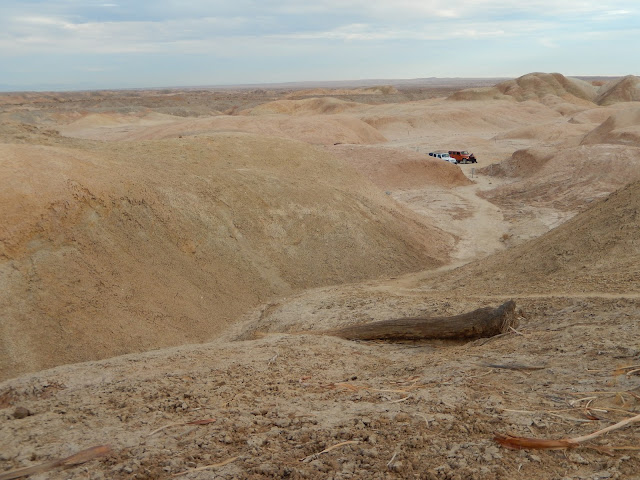 We had a rudimentary map with us and we basically followed along in the Arroyo Salada and Tule Wash until we came to a unique geological formation called the Pumpkin Patch.    The area, about the size of a city block, has been fenced off to keep off-road vehicles from causing damage to these fascinating, pumpkin sized rocks called concretions.   There is a "people" gate so we could get out and walk among the formations. 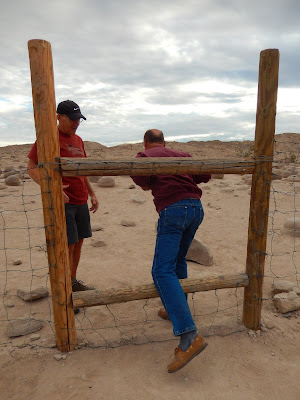 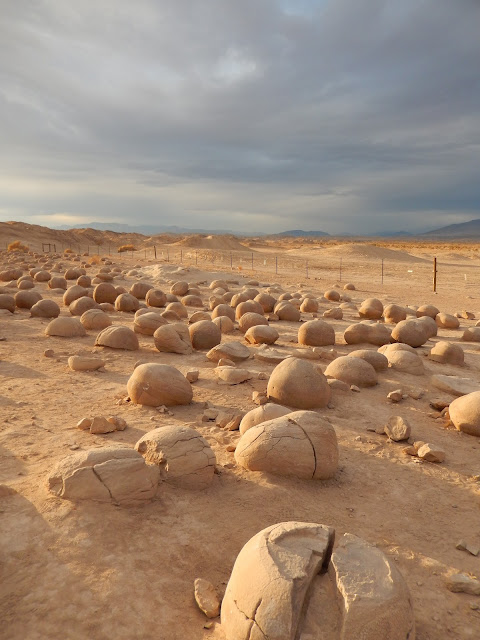 Some of the "pumpkins" are cracked and broken, exposing the "pearl" inside. 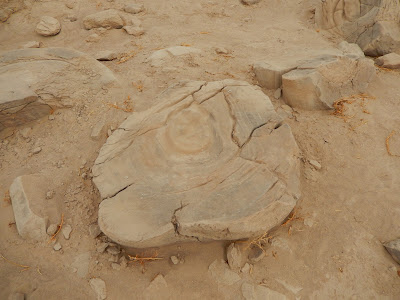 The quality of light was absolutely beautiful there......the dunes were lit by the sun and the shadows were long.   The distant sky and mountains looked angry and grey from the impending rain. 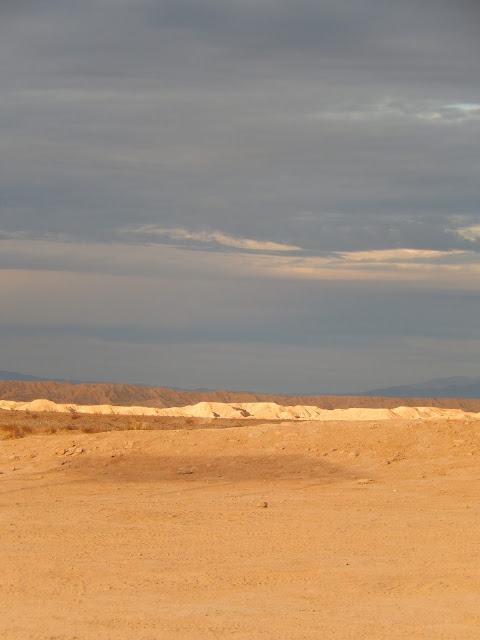 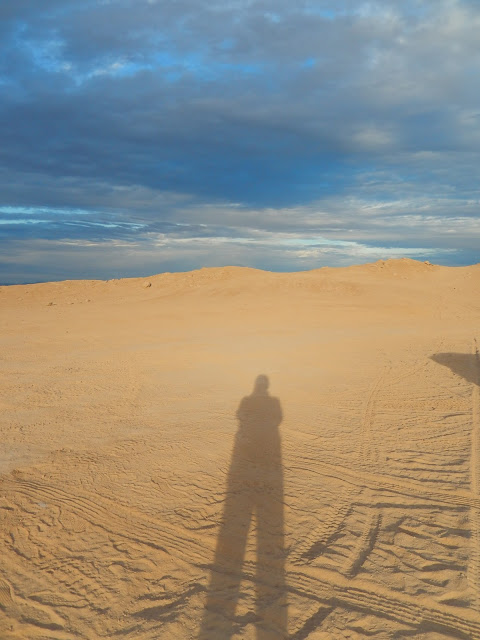 We began to realize that the sun angle was telling us that it would soon be dark and we'd better get on our way home.

While we consulted our map, Tessa got the zoomies and thundered around us kicking up clouds of dust.....what a goof ball she is! 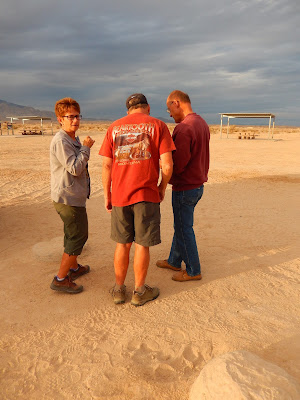 The Anza Borrego Badlands are about 20 miles wide and 15 miles long, a maze of hills and arroyos and one thing looks much like another.   Driving in it after dark was not something any of us wanted to do.

We were in the lead again, Jodee and Bill dutifully following us up steep, rocky hills, down identical sandy washes, waiting when we had to back up and try another way. 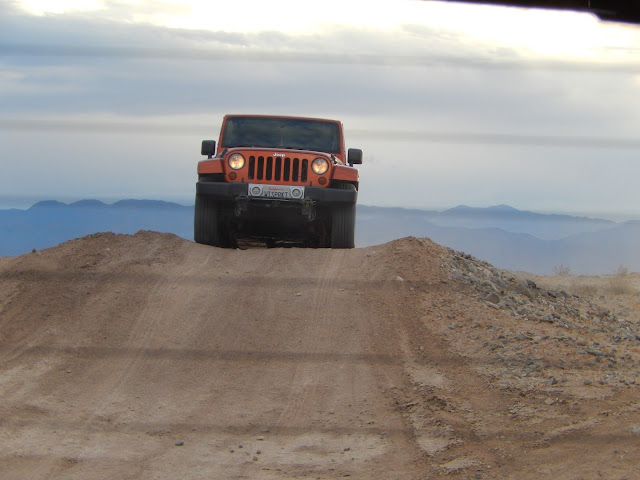 I have no more pictures to show you.    I was too busy in the backseat, holding on and offering useless suggestions as to which way I thought we should go.    John is an excellent desert driver, he and Dave always knew where we needed to go, they had their eyes on the mountain peak and cell tower we needed to get to in order to find the paved road home, but sometimes I wondered if we'd actually get there.    Pam did not enjoy this part of the trip.    She did not want to be lost in the desert at night.

True to John and Dave's assurances, we exited the desert just as dark fell.   Jodee and Bill left us there and headed back to their Motorhome in Thermal, California, about 45 minutes away.     Thanks guys,  we had a really fun and full day!
Posted by Suzi at 12:08 AM