Laurel and Eric pulled out on Sunday morning, continuing their travels.   We were sad to see them go.

Cindy P and Walter arrived a little later on Sunday, we were happy to see them come!   We haven't seen them since last fall when we were in Lexington, KY, their current hometown.   When we were neighbors here, we saw each other all the time.   It's been a hard adjustment for us all so we're always so glad to have time together.

They came to Geneseo to see us, but they also came to see other friends and family they left behind so we spent as much time as we could with one or both of them.    Lewis was also very very happy to see them.   He spent lots of time with Cindy in his early years and has a long memory.     They brought a fun little surprise for him too.


Well, they didn't exactly bring her for him, but we didn't have the heart to tell him that.    He loved her at first sight.  Bex is Cindy and Walter's new little puppy, a Miniature American Shepherd, about 4 months old.    She was a little shy about interacting with such a big macho guy but her inhibitions soon fell away and they became best friends. 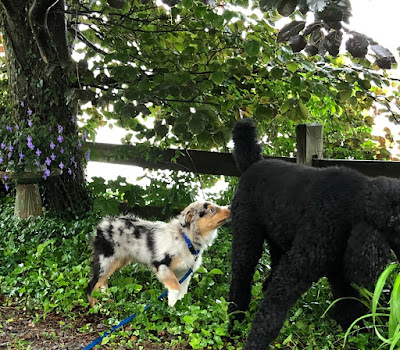 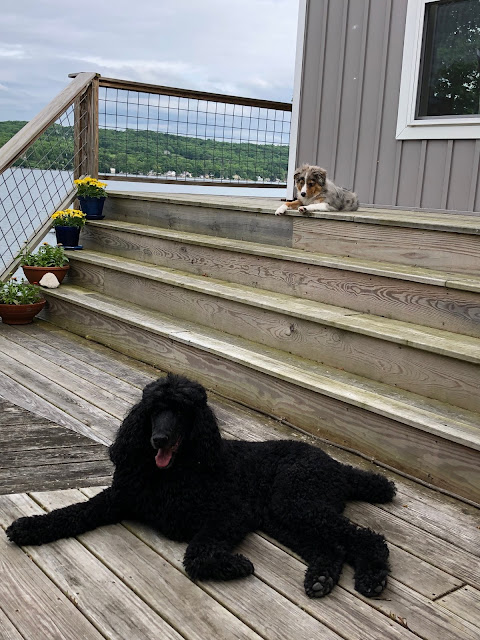 We shared at least second cup and happy hour each day Cindy and Walter,  went out to dinner two nights in a row, celebrated Dave's birthday and their 22nd anniversary, visited with the fabulous Fred and his sweet wife Jeanie, and enjoyed giving little Bex a whole passle of new experiences.   Swimming in the lake (well, a few strokes at least), blowing bubbles in the water, walking out on the dock, up slippery stairs, carpeted ones, playing with a big dog, learning not to sniff cactus plants, being cared for by strangers, new toys, etc., etc., etc.   All big things for a little girl.

If you're wondering what the little red dot on Walter's forehead is - not it's not a laser pointer dot, see the photos below.


Walter has officially joined the ranks of true rvr's now that he has made direct contact with Beluga's awning arm.   He was a good sport about it, found a creative way to keep ice on the fresh wound while continuing our happy hour without skipping a beat. 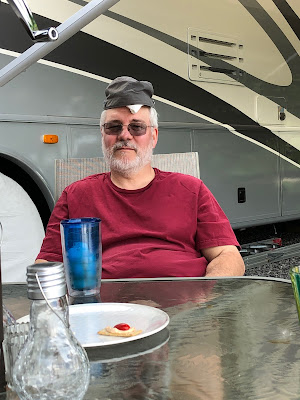 Jeanie and Fred pretended they didn't notice the unorthodox head gear.   They're so nice.    Fred brought his famous Fettuccine Alfredo with Shrimp and Scallops for us to have for dinner one night.   I told you he was fabulous! 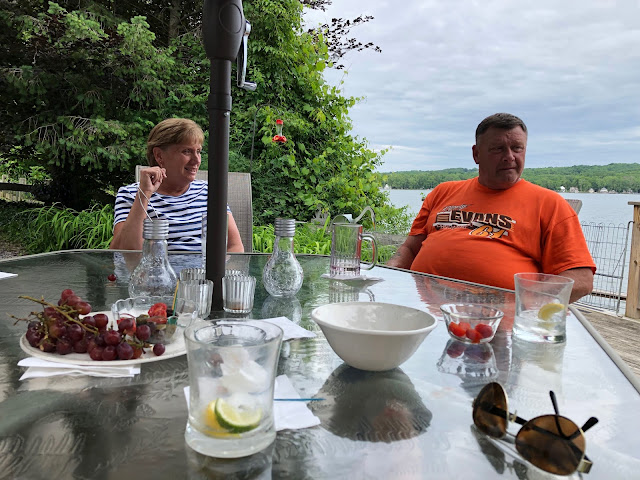 The weather didn't cooperate for Cindy and Walter's entire visit.  The first few days were nice and summery.   They had a nice view of the lake when they opened their door each of those mornings.   Their little dogs could sit outside in the sun those couple days.    Then.....it all went downhill. 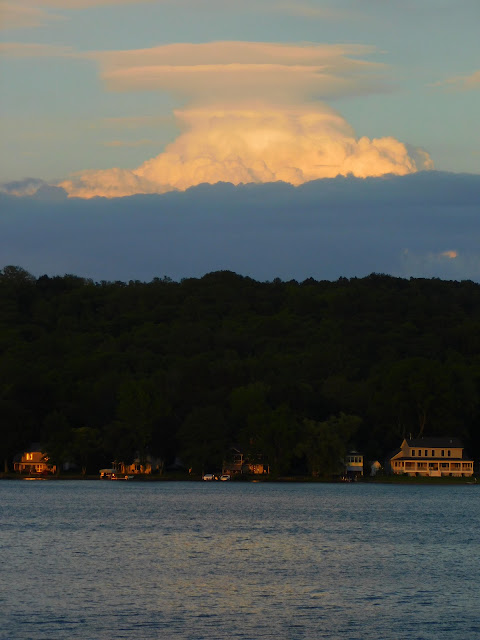 On our way home from our Prime Rib dinner birthday celebration in Stafford, the clouds were gathering and we knew what was in store.   We thought we did.   It rained hard all night with heavy thunder and lightning. 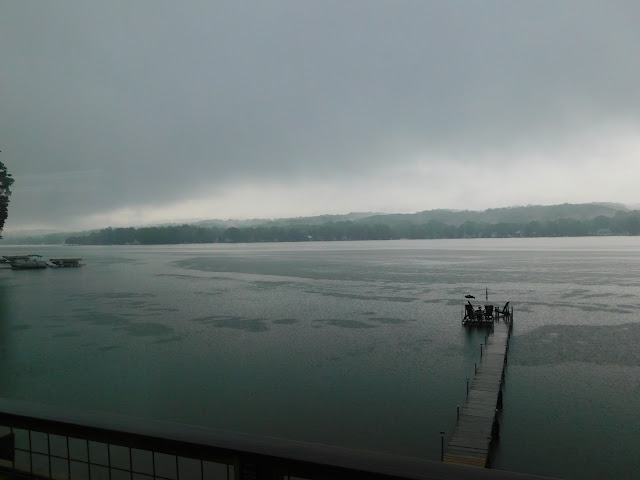 Lewis hasn't been able to deal with thunder in the last year or so.   He becomes catatonic and, now that we're home, heads for the bathroom to hide.


After all was said and done we had accumulated more than 4 inches of rain in the two day period.   The lake was very high and filled with debris washed into it from the surrounding small streams and drainages.  Many people's docks were underwater.   Ours was spared but it's deck is directly on the surface of the lake so if a wave comes in it squirts up between the boards in a most alarming way. 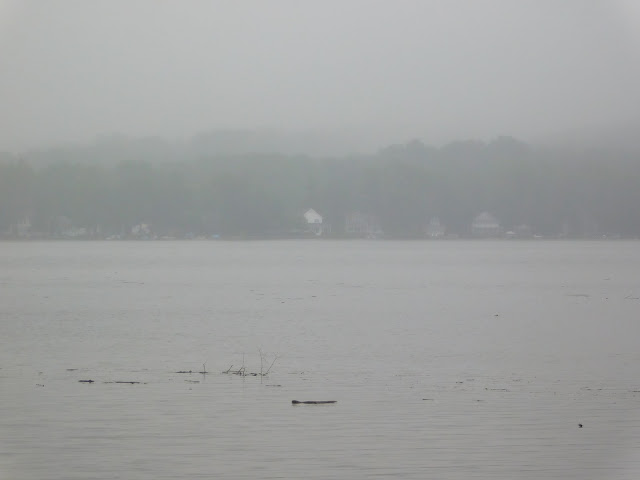 The rain finally stopped so we could enjoy the drive to Honeoye Falls and our dinner at the Rabbit Room.    The falls was running full and muddy as we passed. 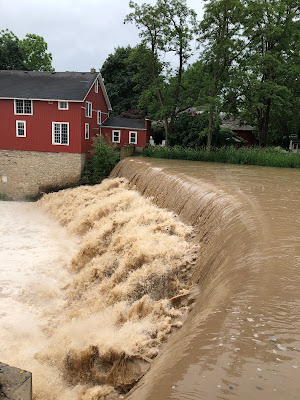 Friday afternoon Cindy and Walter each had friends and family to visit with and another group dinner had been planned in nearby Linwood so we volunteered to babysit sweet Bex while they were gone.


By then she and Lewis were fast friends and there was nothing off limits.  Up and over the couch, up and over us.....tugging on ears, feet, necks, she jumping off the couch onto his back, he playing tag and follow me.   This is a tiny house - we just sat on the couch and pulled our feet up.   As long as no one got hurt, we enjoyed the play. 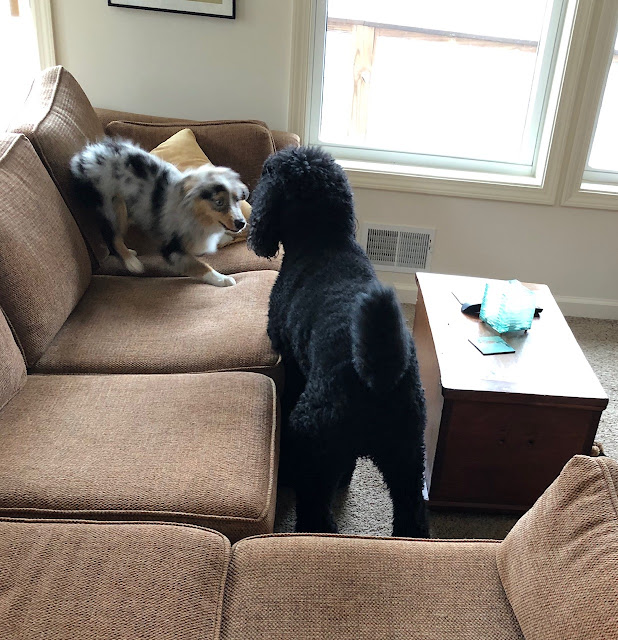 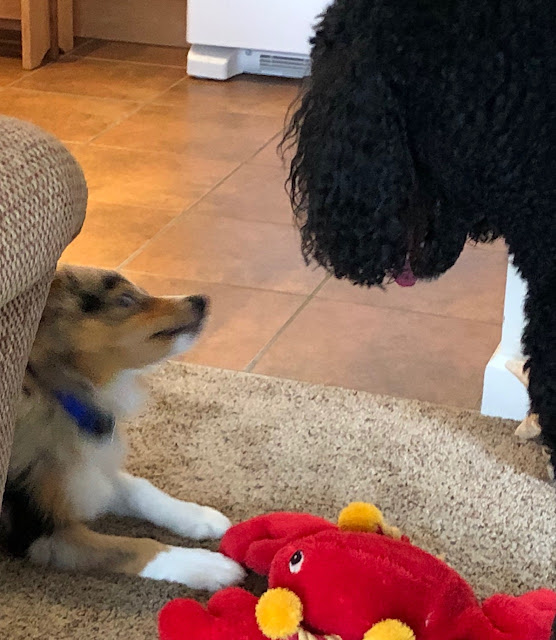 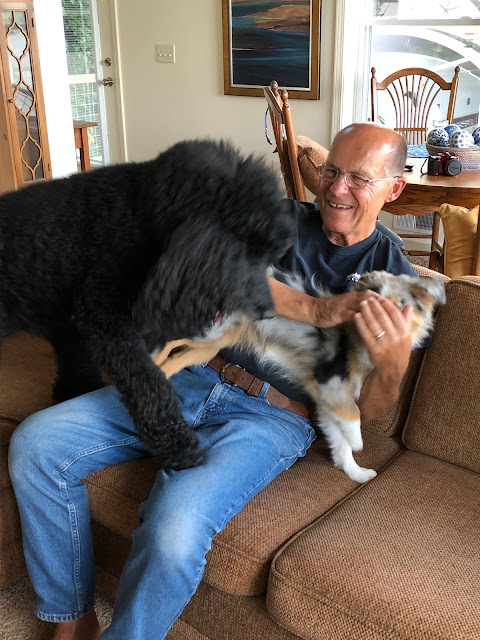 At dinner time, however, play must stop.   Dogs must be quiet and lie down, no pestering, no barking or begging.   She was a very good girl. 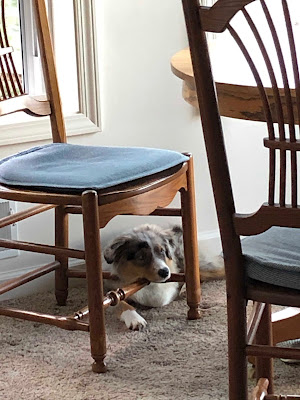 They all left this morning.   That made us sad.   The house was very quiet.   Lewis slept and slept.

He woke up in time to go fishing with Dave after dinner tonight.   Some of you may wonder how he manages to thread himself between and around Dave's legs on the narrow dock without falling in.     Sometimes he doesn't....