After second cup outside, I packed a lunch and we drove about 75 miles west into the Great Sand Dunes National Park.     As has become the norm, the day started sunny and bright but ended with dramatic clouds, Spielbergesque lightning storms over the mountains and strong winds.

The ride through the mountains and over La Veta pass was spectacular.    US 160 wound along the towering Sangre de Cristo Mountain peaks until we turned north on SR 150, through the expansive San Luis Valley and into the Great Sand Dunes National Park.      We could see them for miles ahead of us, they looked like a narrow tan line at the foot of the mountains.    We had no idea of their actual size. 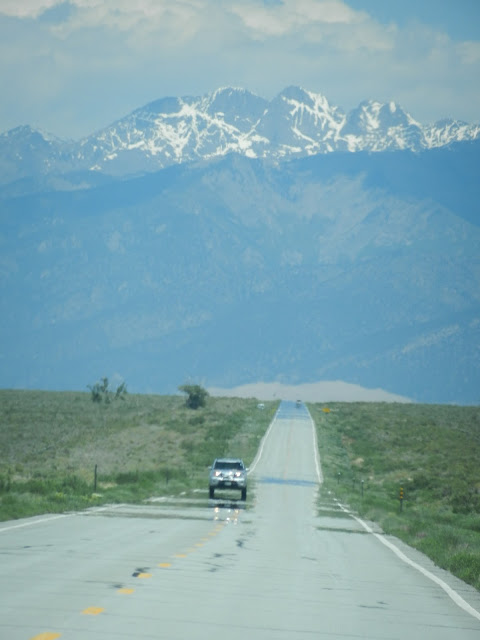 As we entered the Park we could see that they were really quite enormous - 755 ft. high in fact. 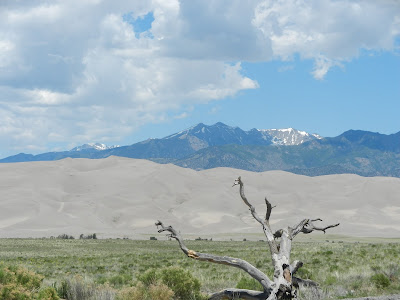 It is hard to understand the scale of these dunes until you see people climbing on them or snowboarding down, sandboarding down. 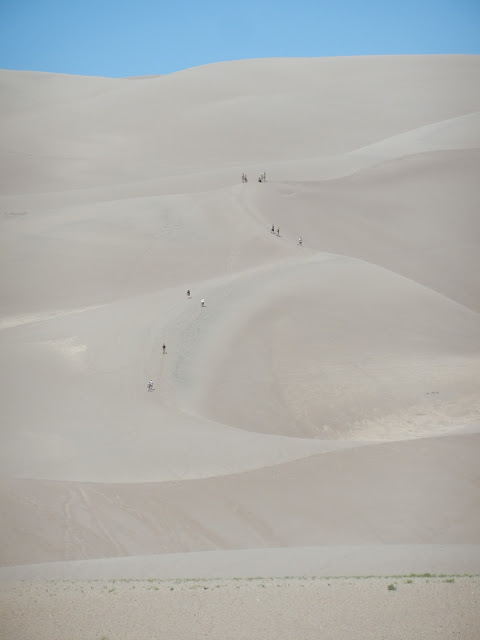 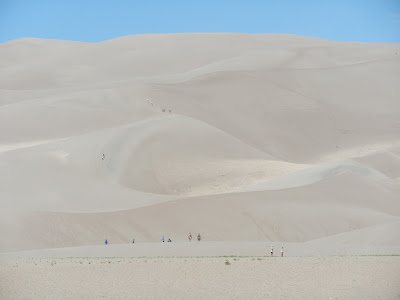 We parked in a paved parking lot full of people in bathing suits, applying sunscreen, carrying sun umbrellas and running through the bushes.   We decided to eat a quick lunch then continue on our drive into the park.   Curiosity got the better of us, however, so we as soon as we finished eating we got out and followed.    We weren't prepared for what was through those mosquito filled bushes.....a fast moving creek! 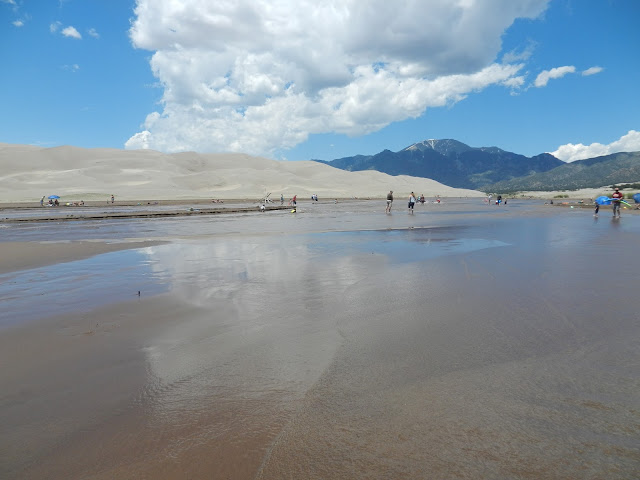 A shallow, warm, sometimes still and sometimes rushing creek right at the base of these huge tan dunes. 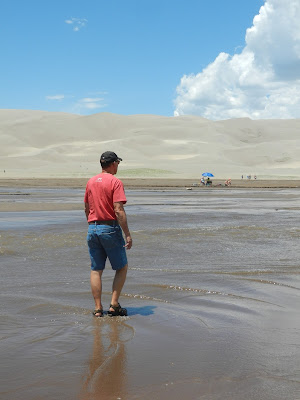 I don't know why, but every few minutes a tiny  "wall" of water would come rushing towards us, splashing and tumbling over the sand.   For a minute it would be hard to walk through it, the current was so strong and then, as quickly as it came, it went away and we were just walking in a shallow, calm stream.   How fun was that!

Kids were laughing and racing into the oncoming current, throwing themselves down on their bellies as the water flowed over and around them.   We had a ball watching their joy.     If I was .......years younger I would have flopped right down and joined them - What fun! 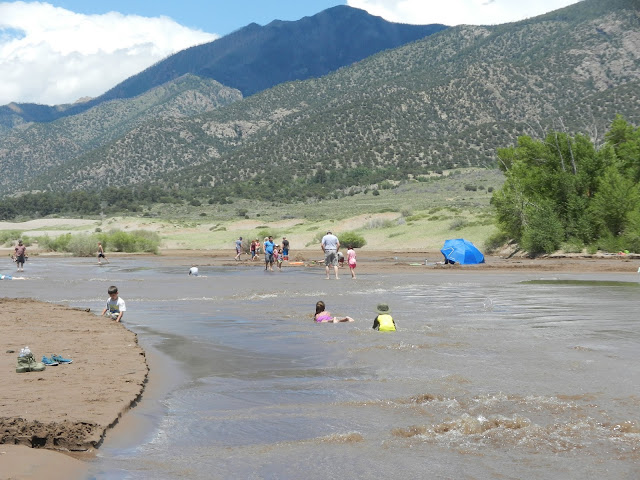 After awhile we left the stream and started walking toward the dunes, but they were much further away than they looked and the dry sand was HOT so we waded back through the stream and into the parking lot.

I'd seen a primitive road on the map and it looked like an interesting drive.
I wanted to see if we could find the stream again in a less populated area so off we went. 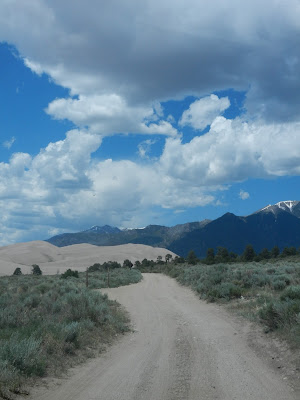 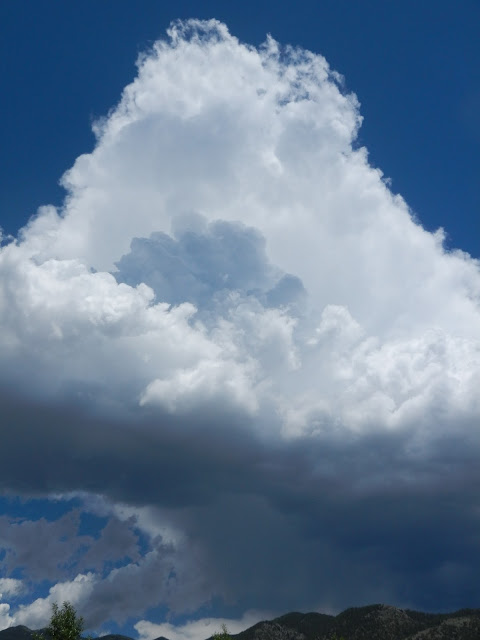 Clouds were beginning to build, the road was becoming rougher (soon we'd need to let some air out of the tires to proceed) and it was getting late in the afternoon so we turned around at the Point of No Return parking lot and went back the way we came.

Small, low growing cactus carpeted the sand along the road side, beginning to show their yellow blooms.    I got out to get a picture of them and was almost carried away by swarms of mosquitos!   Mosquitos in the sandy dry back country?

Needless to say, I got no pictures of the pretty yellow blooms....I jumped back into the jeep and didn't get out again until we exited the park.   I did manage a few pictures through my side window!

After dinner tonight we sat in Beluga's front seats and watched an incredible hour long lightning storm moving very slowly across the Spanish Peaks.   Never seen anything like it before.     After the monster pulled away we were treated to another breathtaking sunset. 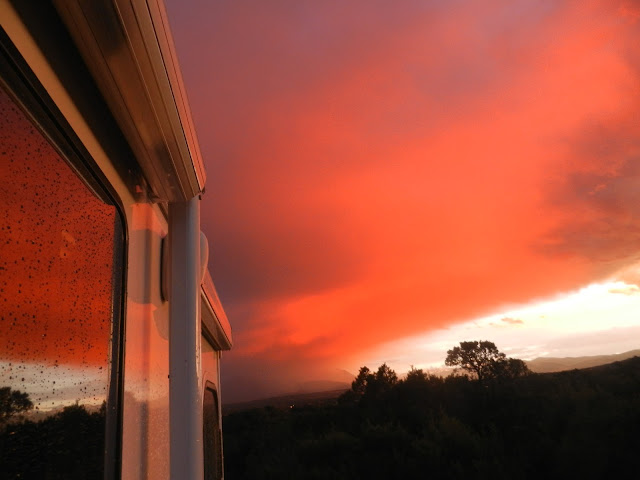