We're just not too bright.

After a delicious New Mexican lunch we set off for the Albuquerque Bio Park and its wonderful Zoo.   I had been there before with a friend while Dave and her husband went flying or golfing, but he hadn't seen it.


We were lucky enough to find a great parking spot under the shade of some tall trees and when we entered the zoo we were happily surprised at how empty it seemed.    No bus loads of school children, no crowds at the habitats.


We practically had the entire place to ourselves!   How could we be so lucky?
Not many animals doing anything interesting, however.    Most were sleeping, or floating very still in their water features. 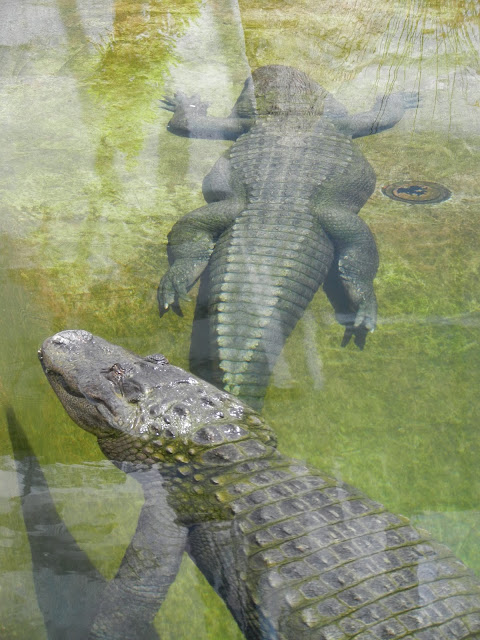 No big cats lying in the windows, no polar bears frolicking in the water, no birds flying through their enclosures.


The only creature moving at all was this year old howler monkey swinging around and through the trees, crashing into the bamboo, pestering her mother and new sibling, acting just like any other adolescent.    This is the best picture I could get of her, she was a little hurricane! 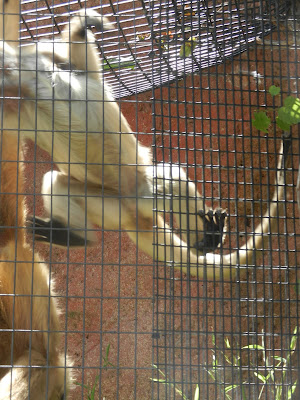 Finally Mom and newborn gave up and retreated to a more secure place.   The teenager stayed at the fence to entertain the humans solo.


We continued walking through the park toward the big cats.   They were all sleeping soundly in the shade.

The animals were the smart ones.  They were resting in the deep shade.    We realized that we were a few of the only ones (think - fools) walking around because it was 109 degrees!    We're not too bright.

We didn't stay to see the great Apes, the giraffe's, etc., etc.   We used our map to find the shortest route back to the car and we barely made it.   We were so hot we weren't even sweating.    As I said before..... not too bright.