Yesterday started off sunny and warm.   We were able to sit outside for second cup, something we all enjoy.    Dave has a juicy cold and isn't feeling his best, so as soon as I went back inside Beluga he fell sound asleep in the sun.   Sasha joined him but Lewis took the role of "watch goose", keeping his eyes open for any danger to the sleeping beauties.... 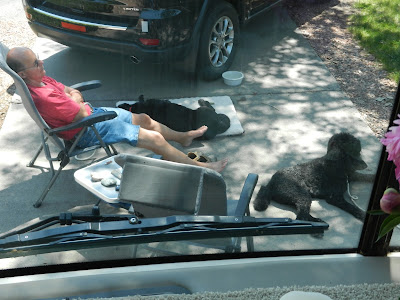 The weather reports were ominous as we prepared to drive up toward Jesse's house to help him start the process of moving into their new Denver rental house.


We managed to get a couple carloads from the apartment to the house and put away. 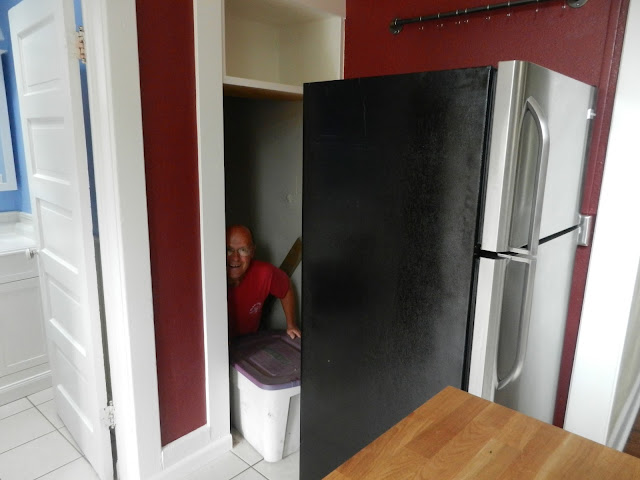 The basement stairs are cleverly hidden behind the refrigerator, to maximize the space in the house's little kitchen!  The frig. sits on a roll-out pallet which allows it to be easily slid out of place when basement access is needed.   Pretty neat solution!


After our pizza dinner we headed back to Golden, hoping to arrive before the storm did.     The sky was black in our direction but the rain didn't start until we got home.

We managed to get the dogs out and settled before the most intense electrical storm we've ever seen moved over us.   Lightning flashed constantly in every direction.  It was really something to experience.  We kept a close eye on the radar, watching this storm move away, then move back over us.  Our county was one of the several that were under severe thunderstorm watches,  flash flood watches and even tornado watches.     It rained on and off, but the light show was incredible.  Hail started as we climbed into bed and I gave up on watching tv as the noise on Beluga's roof was just incredible.   Luckily it was short lived and we awoke this morning to tv news reports showing  tornadoes that struck north of us and plow able hail left on some Denver city streets!    It was a wild night...

Today (with the same weather forecast) we're going back to continue the move.  Stay tuned.