Once again we left Ridgway and drove south into the San Juan Mountains.   Our destination this time was the rustic town of Silverton.   It turned out that the journey was much more exciting than the destination, as is often the case.

The gateway to the mountains this day was obscured a bit by a smokey haze driven towards us on north east winds.   Its hard to believe that the terrible Pacific Northwest fires could affect us in south west Colorado,  but the distant mountains were almost hidden by the fire's haze. 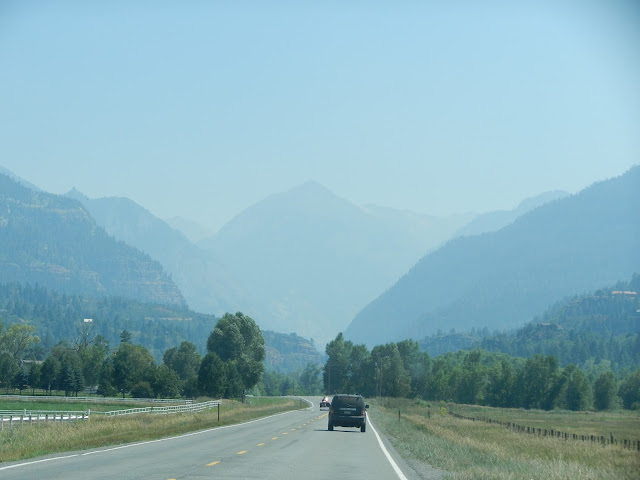 To get to Silverton we had to drive on the Million Dollar Highway, part of the scenic San Juan Skyway.   Yep, another story about me taking us to places that induce near panic.    Dave is a saint, that's what you're saying right now.  I know it.    He is - I won't argue.


The 12 miles between Ouray and Silverton are the hairy parts of this drive, especially doing it in this direction.    You go through a tunnel, under an avalanche shed, over a very high waterfall and then drive along the very edge of a cliff for miles. 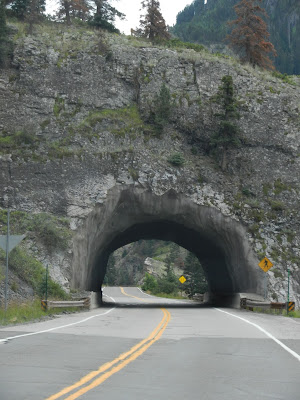 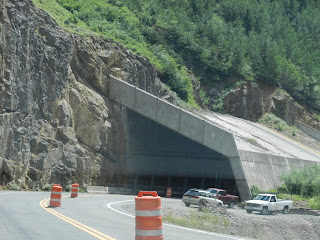 Did I say right along the very edge of a cliff for miles?   Did I say there was construction in one spot (one of the most dangerous spots) that necessitated us stopping - on the edge - for 10 or 15 minutes.    Did I mention that my side of the jeep was the side next to the vertiginous drop into the valley?

Once we started moving again I slowly regained my composure.   A mile or so after, however, Dave had to slam on his brakes to avoid hitting two female Bighorn Sheep that suddenly appeared,  slowly strolled across the road in front of us and then walked straight up the sheer side. 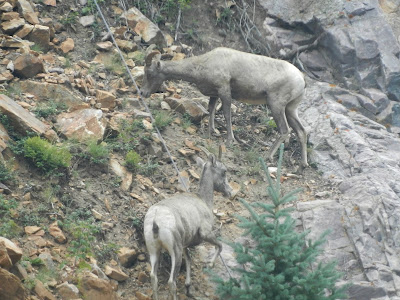 The picture isn't very good, forgive me.   I was flabbergasted by the fact that these two evidently just climbed up the ridiculously steep mountain side, the one that was right next to my side of the jeep, as if it was a walk in the park.   And by the thought of where our little jeep may have gone (no guard rail, no shoulder) if Dave (the saint) hadn't been on the ball and been able to stop in time.    Or the thought of what could have happened if a semi coming the other way hadn't been able to stop in time.....

So, moving along.    The excitement of the ascent to Red Mountain pass was somewhat mitigated by the stunning views of these colorful mountain peaks and by the fact that we now were on the inside lane. 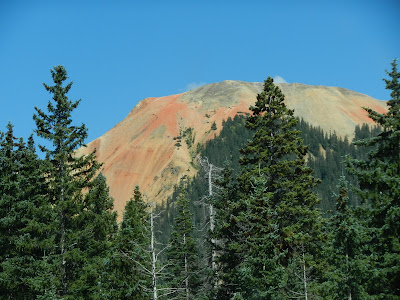 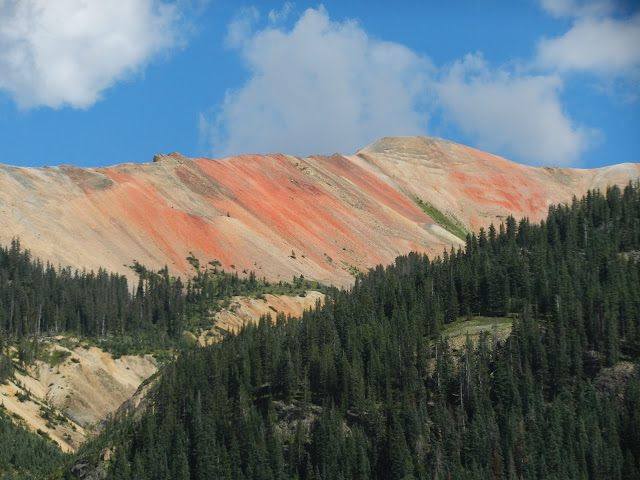 The brilliant colors of Red Mountain l, 2 and 3 are the result of the reddish iron ore rocks that cover them.   They range in altitude from 12,225 to 12,896 feet above sea level. 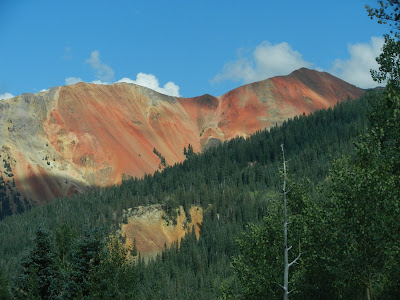 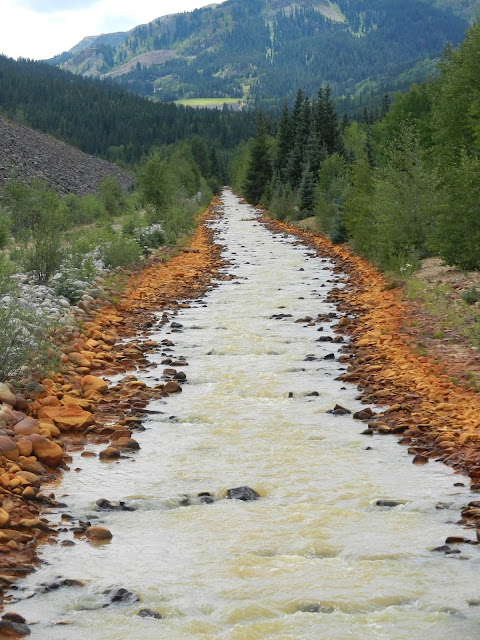 Silverton was a bit of an anti-climax for us.   It is a small town that made us think of what an Alaskan town might look like.   The main street was paved, but most of the others were dirt.    We saw a few restaurants and shops and lots of ATV's and trailers pulling trailers of ATV and OHV's.    There were a few interesting buildings on the main drag and a couple houses had pretty flower gardens in front. 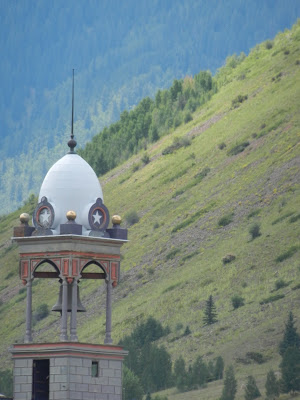 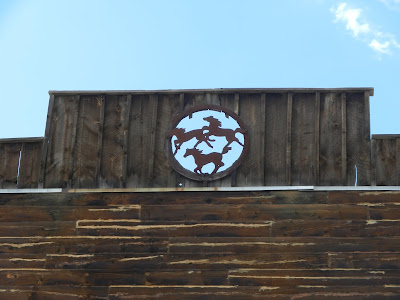 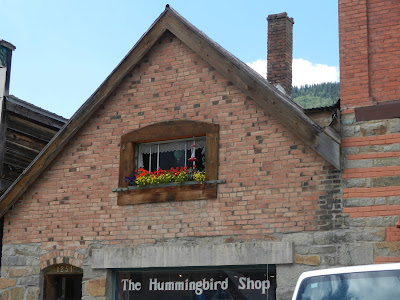 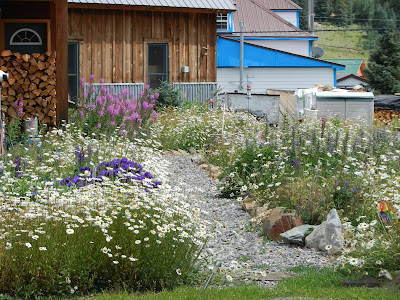 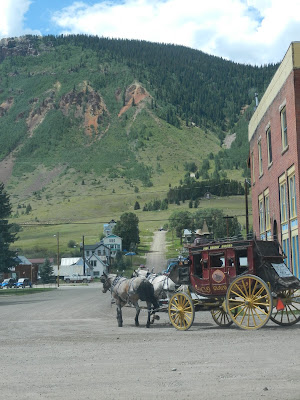 Knowing we had that exhilarating Million Dollar drive back home waiting for us, we really didn't spend much time in little Silverton.    On our way out of town I decided I'd keep an eye out for wildlife, as a way to distract myself....

Look what I saw!  Two female moose dripily grazing in a stream that cut through a beautiful green valley. 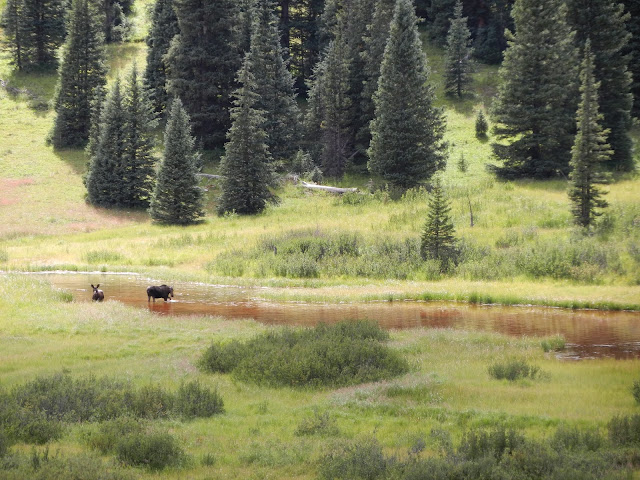 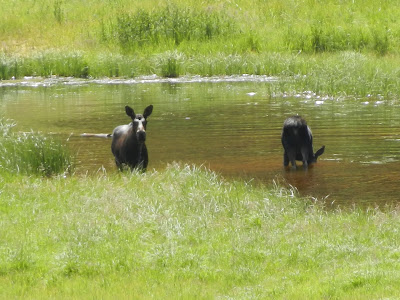 The girls were watched over by a big male.   He was under a nearby tree and I couldn't get a good picture of him.      We sat and enjoyed them and the view for quite awhile before continuing on home. 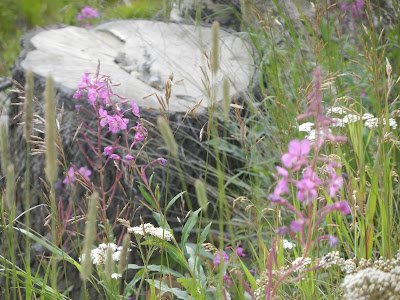 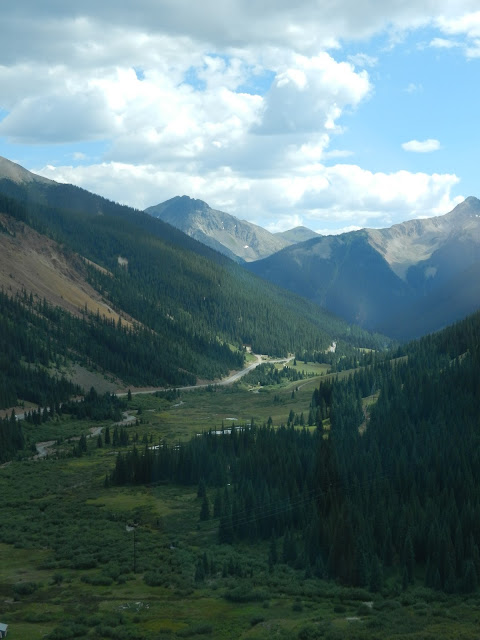