Another week has gone by.   We've relaxed and also been busy.   Dave has been bothered by a toothache since we got here so, thanks to friends Gay and Joe, he secured a dentist appointment.   The result of that was a course of antibiotics (which are helping to lessen the pain) and another appointment at an Endodontist in Grand Junction this week (probable root canal - oh joy).

The pain, however, didn't stop him from eating well.   We met Gay and Joe at Zax's  for dinner last week (no pictures....of course!), had delectable quesidillas at the cute Quesidilla Mobilla food truck down town, a light dinner (and wine) at the Sorrel River Ranch (complete with a wine tasting AFTER our meal!) and "last night" dinner at MonaLiza and Steve's motor home last night before they left this morning. 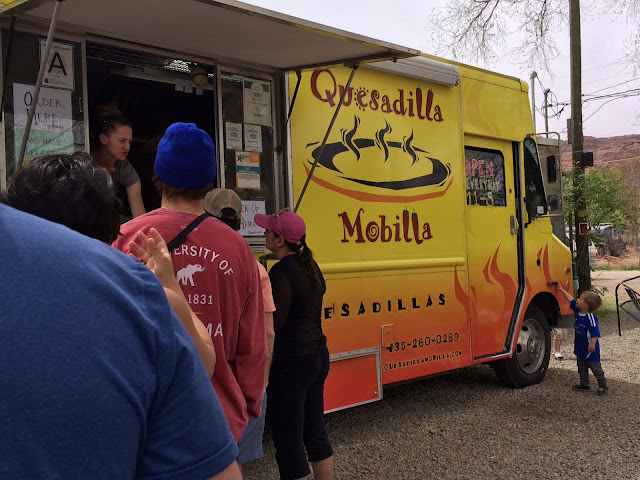 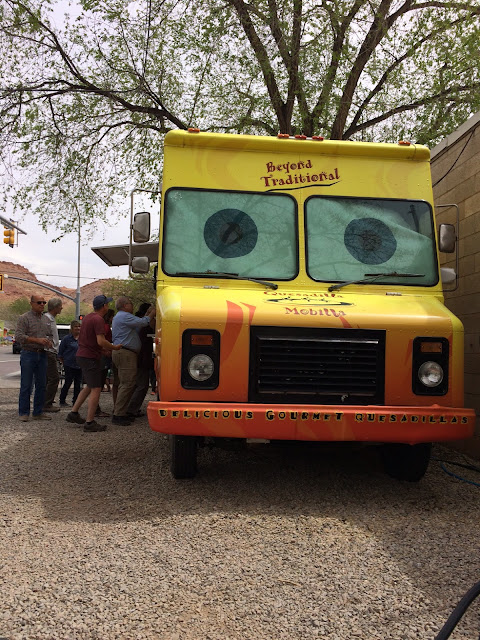 I'm not good at taking pictures inside restaurants.   I'm uncomfortable doing so and the result is that the shots I do get are awful.     I do, however, enjoy capturing people doing what they love to do.

As far as adventure goes, we drove to and explored Tusher Tunnel.   The road is listed as "easy" and most of it was, but it became rocky as we approached the Tunnel.   We liked that because it meant that it wasn't exciting enough for the "big guys" but too rough for regular cars.   Perfect! The company we did have was of the bovine persuasion. 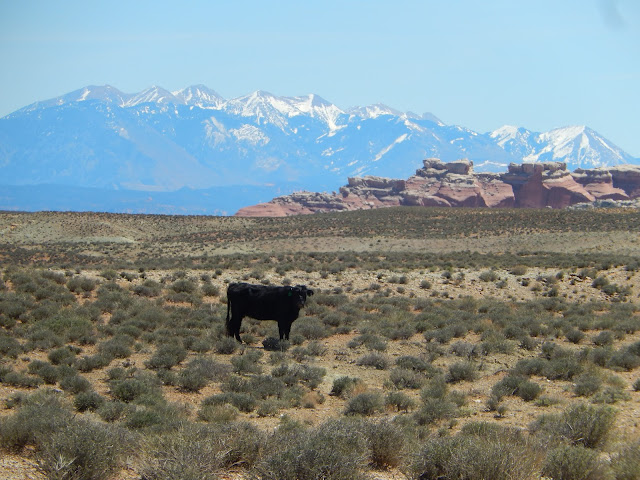 We had a short hike up to access the Tunnel and we weren't really sure where it was as we climbed up. 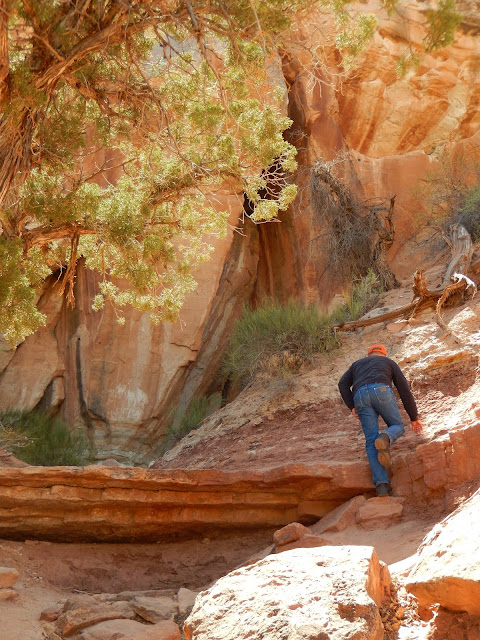 We found the narrow entrance and, although the term "tunnel" usually means it has an opening at both ends, I wasn't excited about entering this black slit.
Once again, Mr. David's A-1 Tunnel Guide went ahead to make sure there actually was an other end.   On can always count on any of Mr. David's long list of enterprises....they never disappoint. 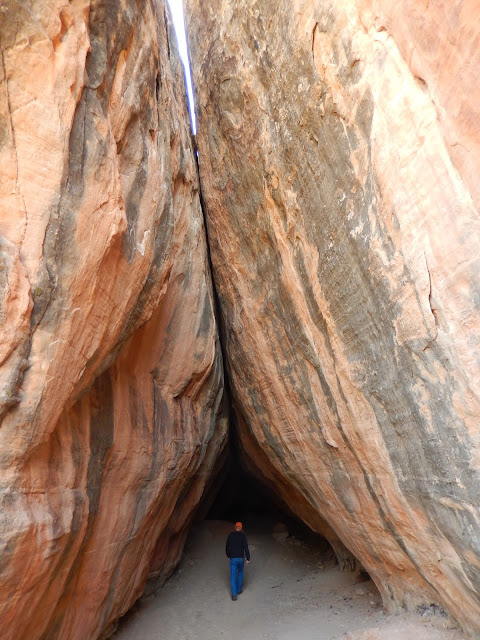 He came back out right away and told me it was safe to follow, that there was a fantastic view once through the darkness.   So I left the relative safety of the opening and went on in. 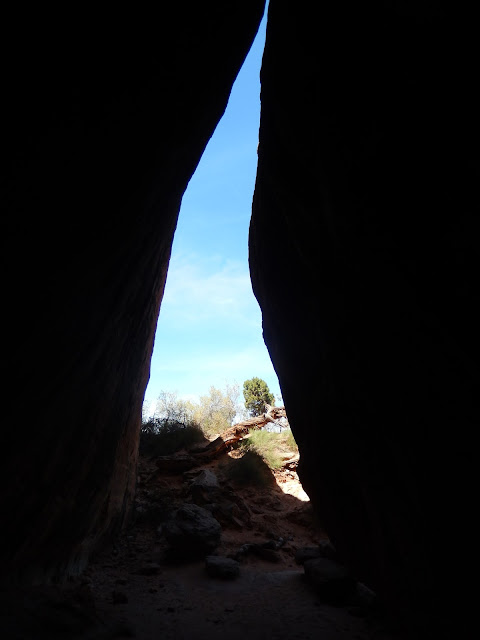 As we came out of the Tunnel we discovered how high we were!   The views were incredible and expansive.   We turned right and followed a wide, rocky ledge to and into other arches, small slots and alcoves. 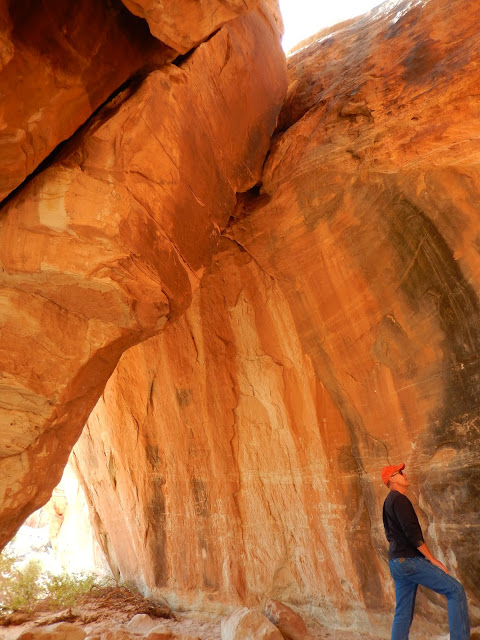 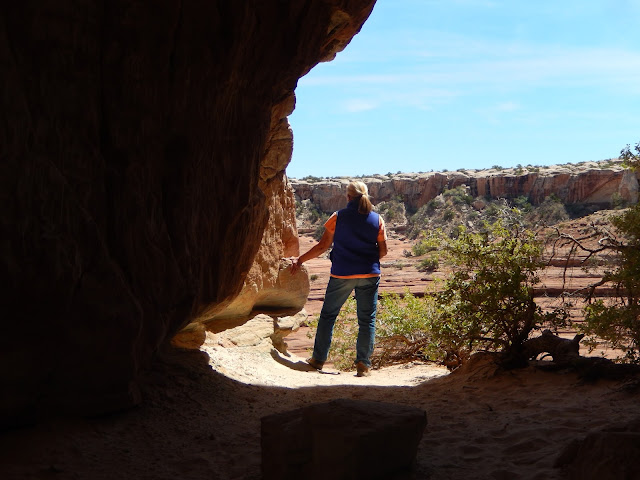 Another time (when my knee isn't singing quite so loudly) we'd like to go back and do more investigating.....

We took a different route - Bartlett Wash Rd. - home, along portions of a muddy wash and across some slick rock with totally different views. 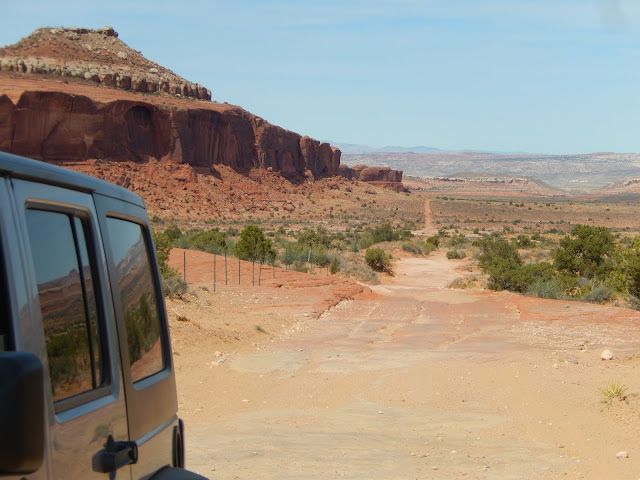 MonaLiza and Steve have been doing a lot of strenuous hiking during their two weeks here and Saturday they had earmarked for a day of rest.   They told us this when they stopped by that morning.     We thought they may as well rest in the back of our Jeep, seeing more of this unbelievable scenery so we invited them to ride along on a repeat (for us) of Onion Creek Road.   They thought that sounded like a good plan, so after they did a quick grocery run we all set off.     I'll show you some pictures of that adventure later, this post has gone on long enough.
Posted by Suzi at 5:09 PM