Another campsite by ourselves.   Totally different settings, but uncrowded once again, just the way we like it. 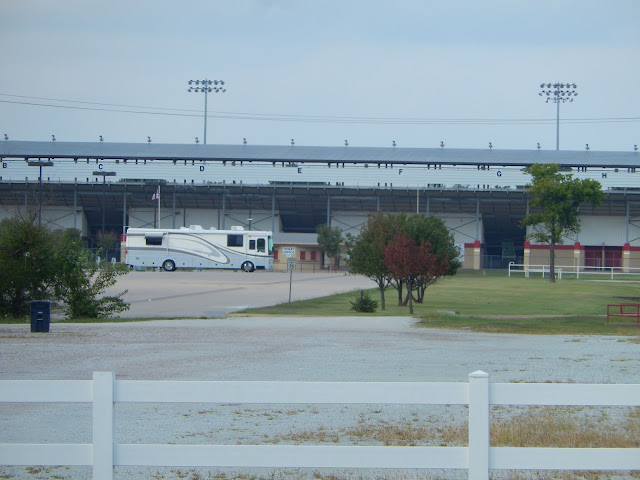 We're parked at the Heart of Oklahoma Expo Center in Shawnee, Oklahoma, about 30 miles east of Oklahoma City.    This is a large facility with 500+ full hook-up campsites and an additional almost 300 water and electric only sites (if their website is to be believed!).     We chose a back-in site in the front of the park, on pavement, instead of the grassy sites in the rear.   Too wet for us!    At any rate there are only two other campers here, TWO.   We have the place to ourselves and it's nice.    Lots of space for Lewis to play and explore and only $25 a night!


Beluga was doing a couple odd things when we first arrived so Dave spent part of yesterday troubleshooting the noises we heard.   Problem solved we think.     It's these little things that keep his mind active!

The weather hasn't been very nice.   Not nasty, just not nice.   It was sunny when we first pulled in and we were jumping with joy but, as if we were dragging those grey skies along with us,  the clouds soon caught up and it's been that way ever since.   Rain and wind on and off, ugh.   Ah well, at last no mud getting tracked in!


Today we drove into downtown Oklahoma City to see the Oklahoma City National Memorial dedicated to those killed and injured in the terrible bombing of the Alfred P. Murrah building in 1995.   I had an idea about what we would see, other bloggers have visited and posted pictures.


I wasn't prepared for the powerful and moving outdoor symbolic memorial we found.     We parked on the street and entered through two closely spaced, large black "gates" - The Gates of Time. 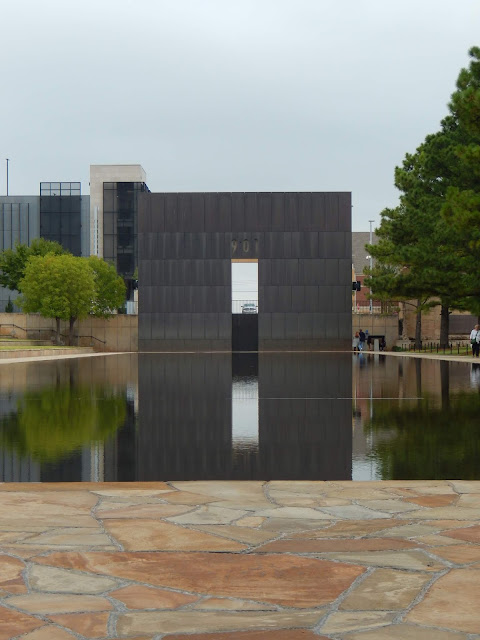 We found ourselves at the end of a long reflecting pool bracketed by another, identical black gate.   The reflecting pool represented the path 5th street took before the bombing. 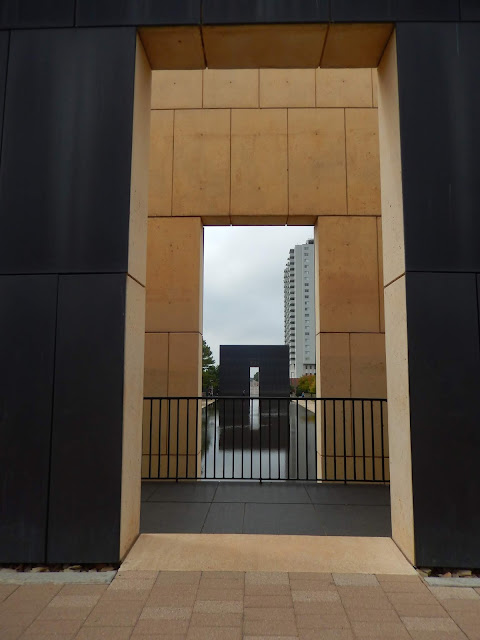 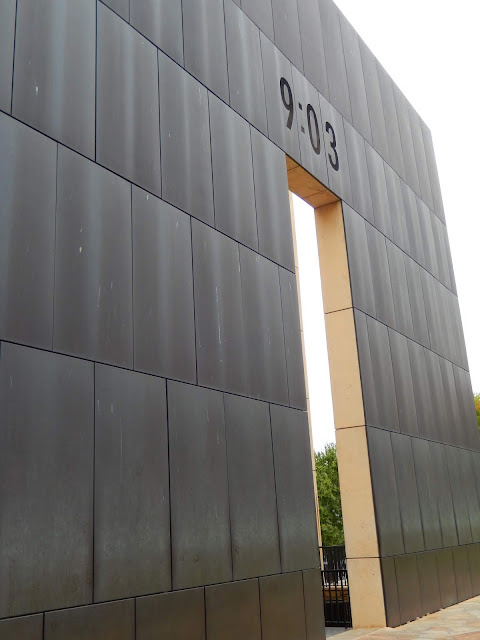 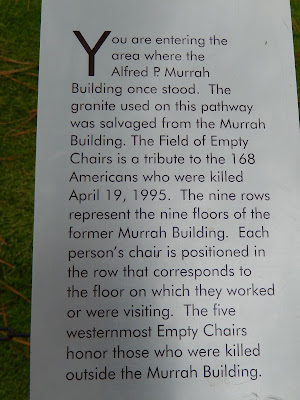 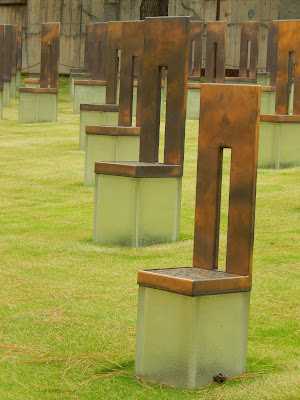 Each chair has one person's name etched in the glass.   Chairs of the 19 children killed are small. 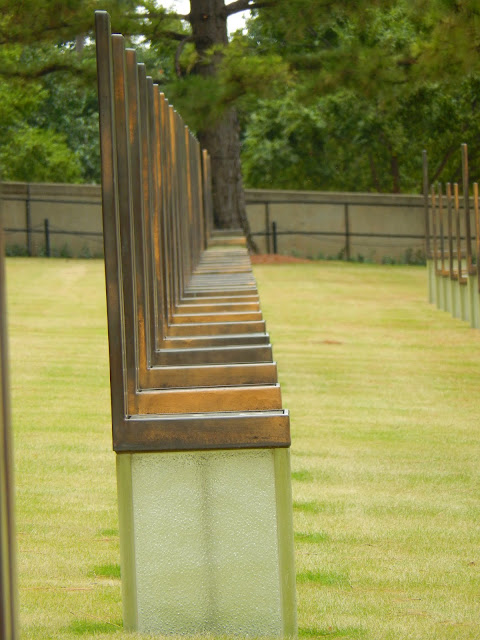 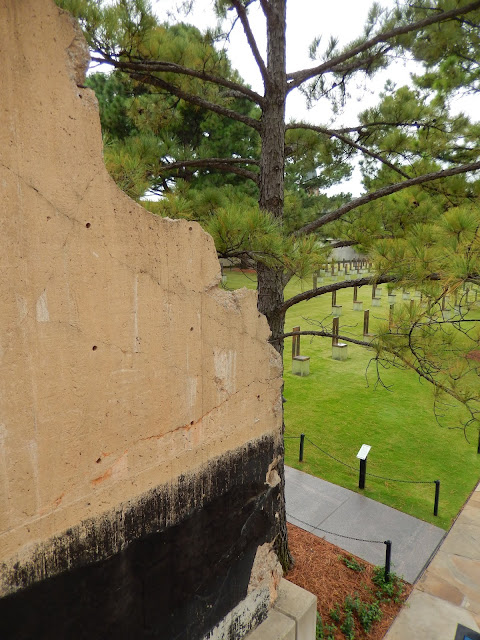 At the east end of the Field of Empty Chairs is all that remains of the Murrah Building.  On this, the Survivor Wall, are several granite plaques salvaged from the building and inscribed with the names of the 600 survivors.

We didn't go into the museum itself, we were just too overwhelmed.   We did wander the grounds, sitting and reflecting, talking quietly about the violence in society and about hope and endurance.

We saw a short wall of hand-painted tiles sent from children around the world expressing their support, thanks, frustration, and innocence. 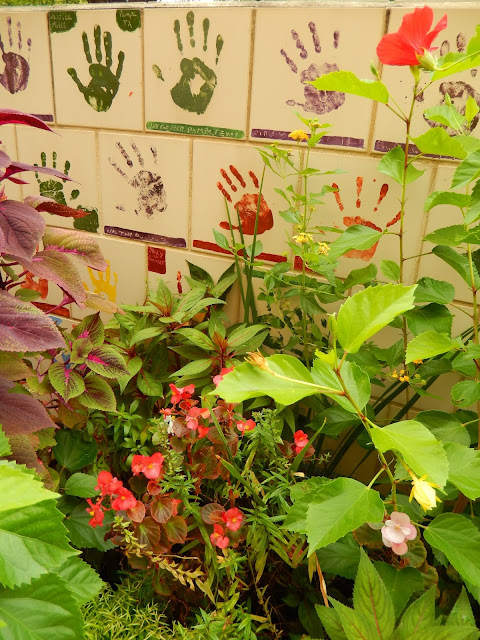 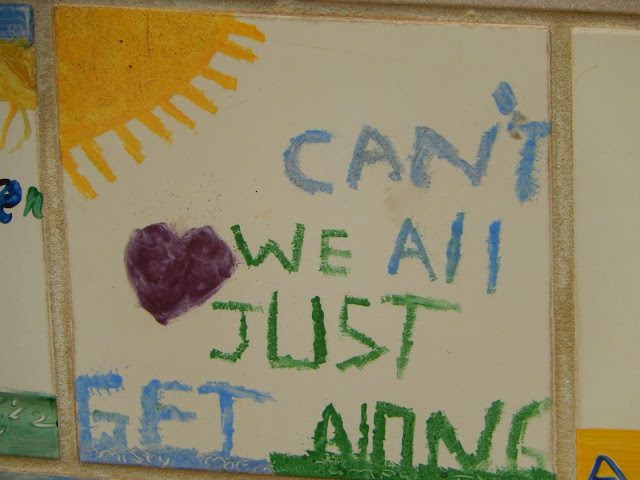 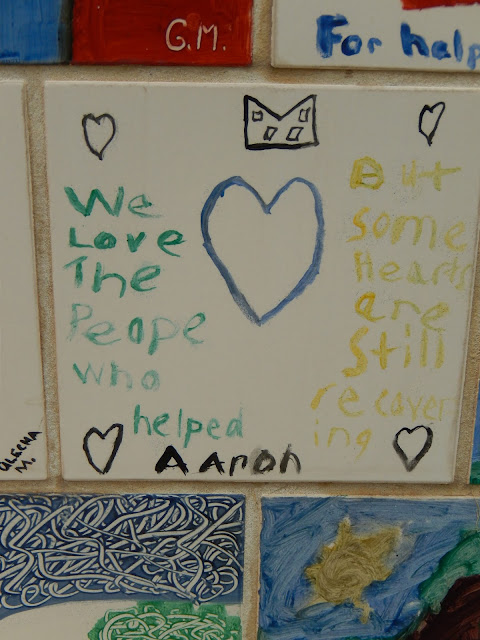 We saw a portion of the chain link fence installed to enclose the crime scene covered with tokens of love and caring.    Stuffed animals, wreaths, photographs, high school t-shirts, plastic flowers, handwritten notes, license plates, marathon numbers and other intensely personal memorabilia.  These things are removed periodically, cataloged and stored in the museum but as soon as the fence is empty, it begins to refill.   People have not forgotten.

Across the street, his back toward the devastation, is a white stone statue, entitled "And Jesus Wept". 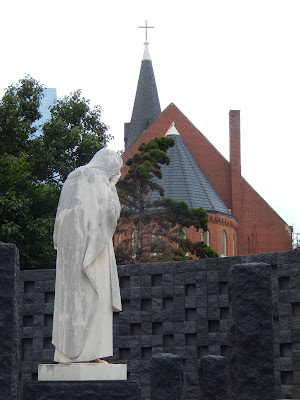 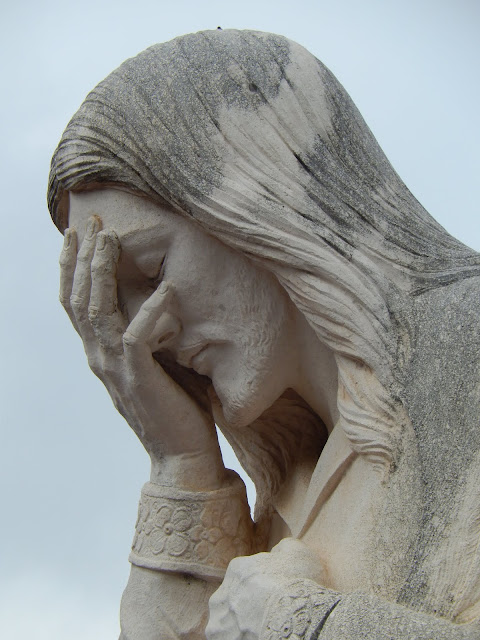