Thursday was the day.     We left Golden a little later than we planned, but we felt we still had plenty of time to drive the big loop from here, north through Boulder, Lyons and Estes Park and into Rocky Mountain National Park on its north side, drive through and down its western boundary, past Grand Lake and then on home via Granby and Idaho Springs.    Sounded easy enough....

We planned on having lunch at the Lyon's Fork in Lyons but it was closed when we arrived.    We later found out it is only open for dinner.    Ah well, these things happen.    We weren't completely starving yet so decided to continue on our trip.

The drive from Lyons to Estes Park was beautiful as we began to drive into the mountains. 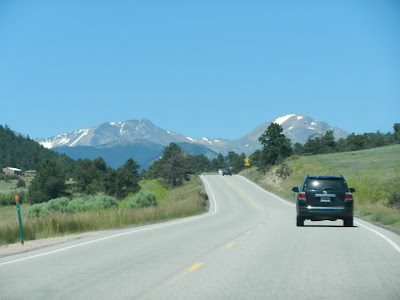 Estes Lake is the introduction to Estes Park from our direction.   It was a little chilly and there were quite a few people kayaking on the choppy lake. 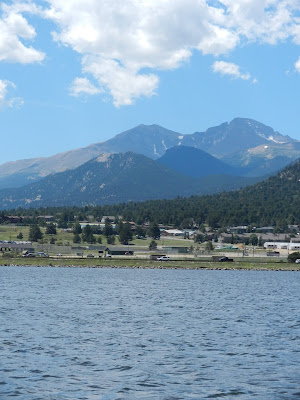 Lunch.....we spotted a Subway not far from the shore and thought we could race in,  pick up a quick sandwich  and enjoy it beside the water.    Once parked, we saw there was a huge line out the door and I was too hungry to wait patiently in  line so we detoured into a little diner called You Need Pie.    We scored a table on the patio and quickly ordered.    That was the end of it.   We waited and waited and waited and waited for our food.   Probably 45 minutes to get a "quick" meal.    When it finally came, it was delicious, but we wasted way too much time just sitting.

Back on the road.    We entered the park at the Fall River entrance station and, thanks to our interagency senior pass, paid nothing for the privilege of exploring this national treasure. 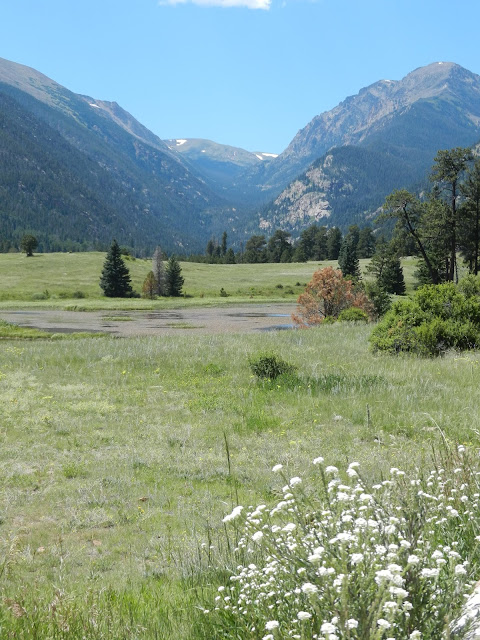 We really did not plan anywhere enough time to just drive through this phenomenal park.   The "quick" lunch stop really ate up time that we wished we had on this journey.    The Trail Ridge Road took us from valley floor, a Montane ecosystem between 8,000 and 9,000 feet above sea level, through a Subalpine zone between 9,000 and ll,400 feet and all the way up into an Alpine zone above 12,000 feet. 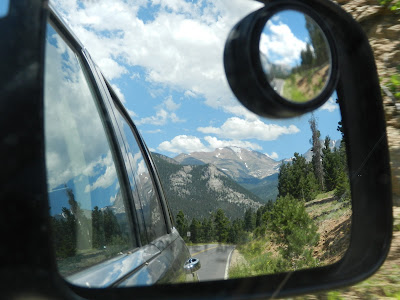 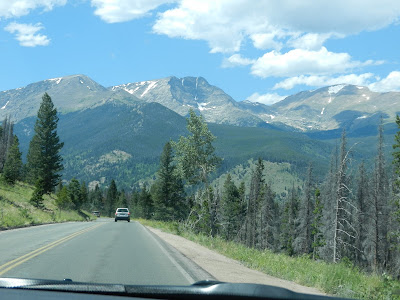 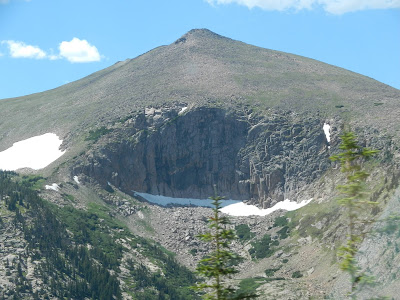 Some of the time the climb was in a heavily forested area, then we would break out above the tree line and I'd see just how high we really were.    You know how I feel about heights, and you also know I consistently route us along the edge of various mountains.   Thrill seeker?     Dave wonders.....   I didn't take any shots of the road or the scenery along the precipice.   The only thing between us and thousands of feet down stuff was a thin white line.   No guard rail, no shoulder, no trees.   I couldn't take any pictures, but they would have been spectacular if I could have, because my eyes were firmly fixed on Dave and out the driver's side window, leaning as far toward the middle of the car as my seat belt would allow. 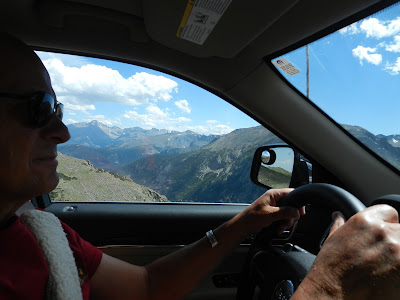 We stopped at just about every pull out.   Sometimes we got out and, if Dave satisfied me that the overlook wasn't really on the 'edge',  we walked around and were completely wowed by our surroundings.


The very high, very dry, very windy and very cool Alpine ecosystem was one that we had never really experienced.

The tundra impresses with its scale, large and small.   The plant life is minute, hugging the ground to exist in the extremely thin soil, bitter cold and brutal winds of this environment.    Beautiful little details that beg to be looked at. 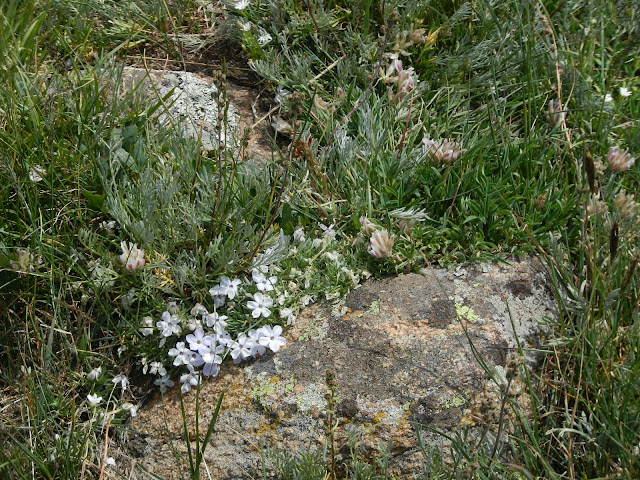 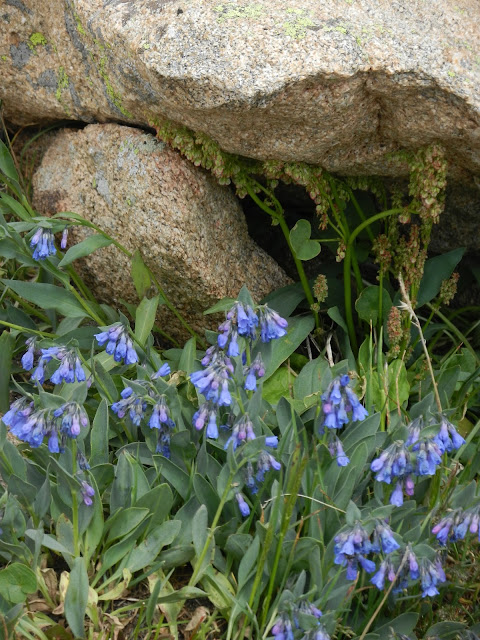 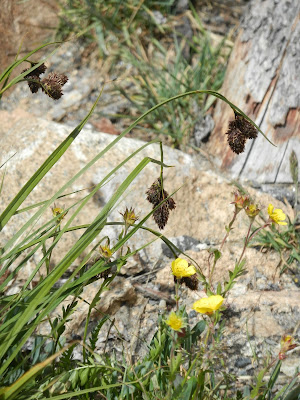 When you look up,  the vistas, unmarred by trees, just bowl you over with their incomprehensible size. Its difficult to understand just how far you can see and how high these peaks are.    I felt in awe, that we were in a different world.   The air is cooler, thinner, warmer.    Its hard to walk a straight line although there is nothing stopping you from doing that, nothing that you can see.    Perhaps it was the altitude....perhaps I was in another world. 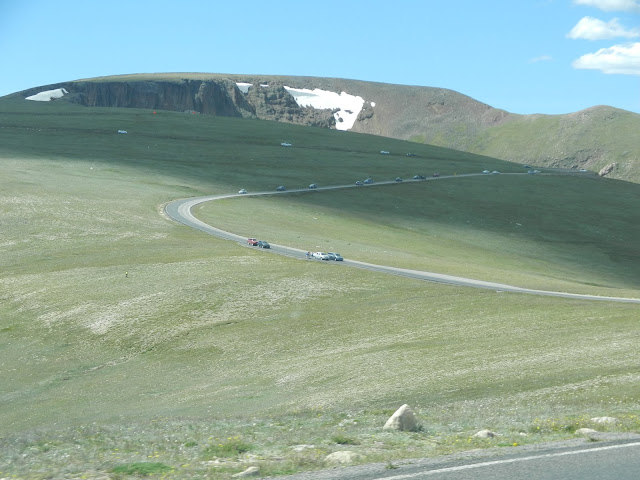 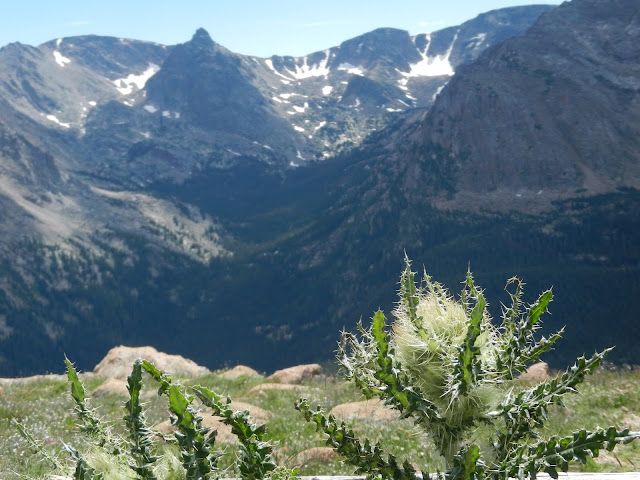 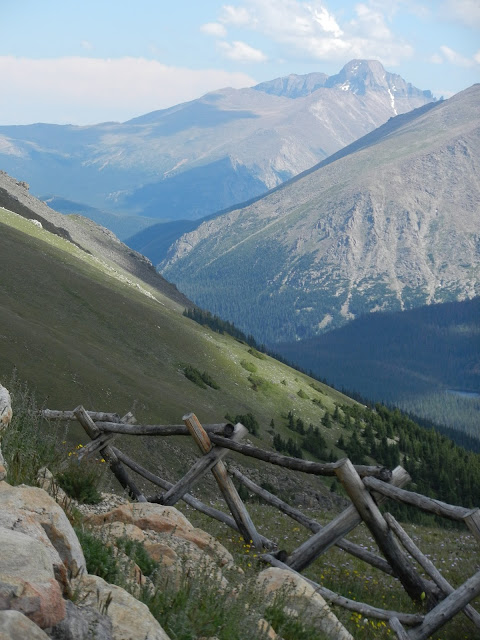 The "sticks" that line these roads are there to show the snow removal equipment where the road is.    They're pretty tall....its amazing to think they have to be that high to poke out above accumulated snow! 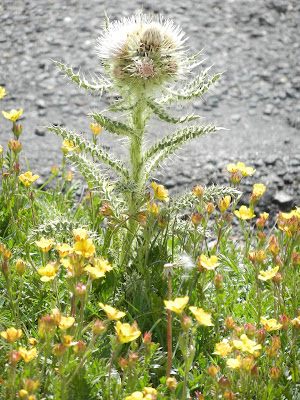 As we wound our way back down into the lower elevations we encountered some serious road construction.    The magic spell of the Alpine tundra was broken by standing in a long line of stopped cars.    We sat for quite awhile.   Outside my window was a sweet little waterfall lined with white flowers. 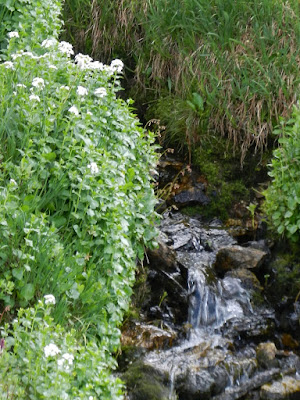 Once down into the pines and grasses, we saw these three alongside the road.   They didn't seem one bit concerned by me taking their pictures. 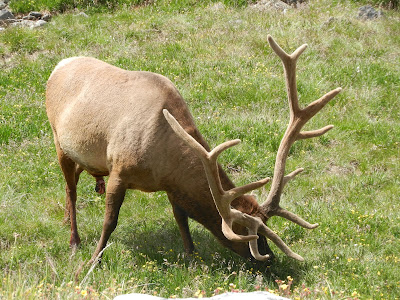 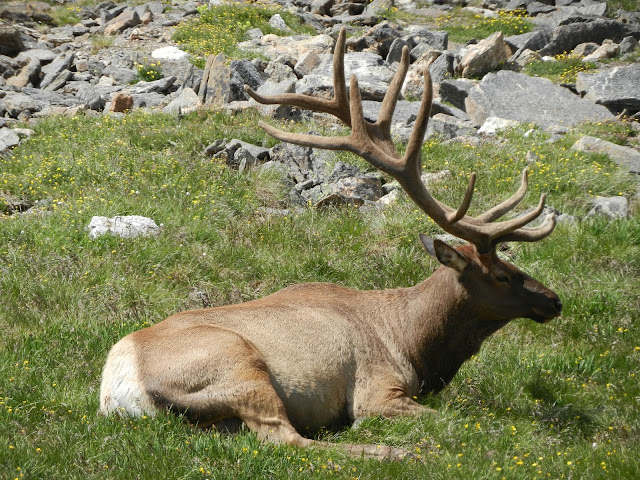 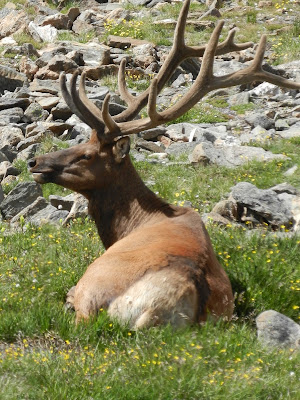 I don't know how they walk around with those antlers!

We past Grand Lake with a promise to return again soon.    It was getting late and our sweet patient dogs had been home alone for a very long time. 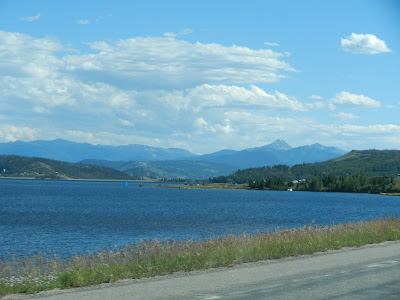 After we left the park we encountered more road construction near Winter Park and we ended up back at Beluga more than 8 hours after we left.    What good dogs we have..

We fed them and sat outside with them til sunset and they were happy with that.   Such good dogs. 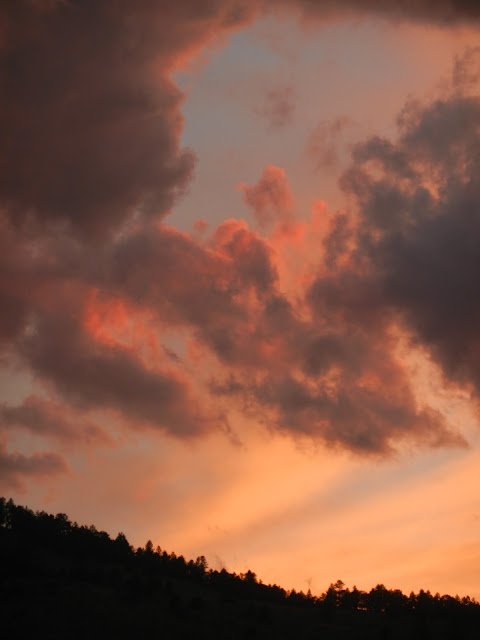