The drive from Santa Fe to Golden, Colorado would have been too many miles for us to drive in one day, so I looked for an overnight stop somewhere near the New Mexico/Colorado border.    We've never spent any time in the north east corner of New Mexico, so I thought Sugarite Canyon State Park would be a good place to spend a couple quiet days.     We found an empty spot in the Lake Alice (yes, Mike, another Lake Alice) campground and shoehorned big Beluga into it facing the wrong way.    This is a tiny little campground and if we had backed into the designated back in site, our door would have opened right into the campground road. 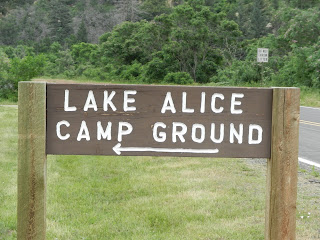 I was a bit skeptical about our surroundings, the woods were deep and untamed and our particular site looked quite unkempt.    The steep canyon sides that rose up around us showed the devastation of a recent (2011) forest fire. 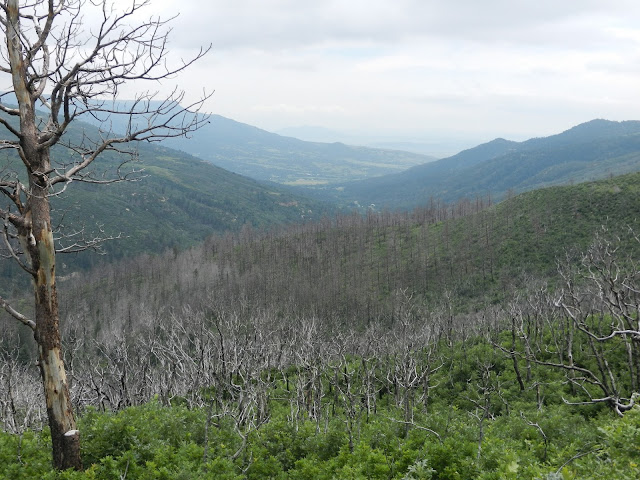 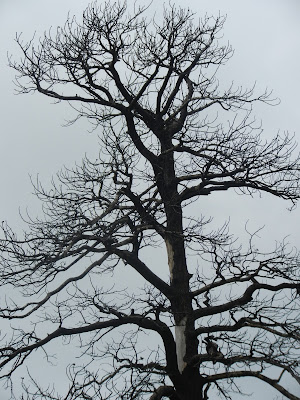 No cell, internet or tv signals reached us at the bottom of this canyon.   Hmmm, I wondered if staying here was one of my best ideas.      We were tired, so decided to just deal with things for the night and reevaluate in the morning.

Turns out this little, rough campground was just the ticket for us.    We were met by "Ole Ben" (yep, thats what he called himself) a delightfully scruffy camp host who made sure we were settled and happy.    He offered help if we wanted it, but also told us that he was sure Dave and I knew each other better than he did and could probably get ourselves into site 5 just fine on our own....he was right.

He didn't tell us, however, about the militant little hummingbirds that owned our site.     As we started to get set up they flew in and got right in our faces.  I mean, RIGHT in our faces.   They zoomed in and hovered at eye level just inches away from our eyes.   It was clear they expected to be fed and pronto.    I followed their instructions, found and filled our hummingbird feeder and hung it the closest tree.   They started feeding immediately and left us to our tasks. 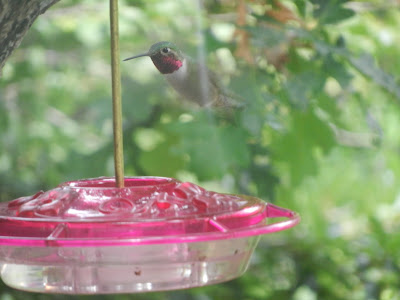 I tried to get a decent picture to show you, but they weren't having any of it.   They zoomed in for a drink, then zoomed up to a bare branch and chattered at us.  In and out, in and out all day long.   Too funny!

We ended up really enjoying this quiet disconnected campground.   We sat outside watching the little tyrants, read, ate, and went to bed when we were sleepy.   Deer moved silently through the deep underbrush next to our sitting area, paying no attention to us whatsoever. 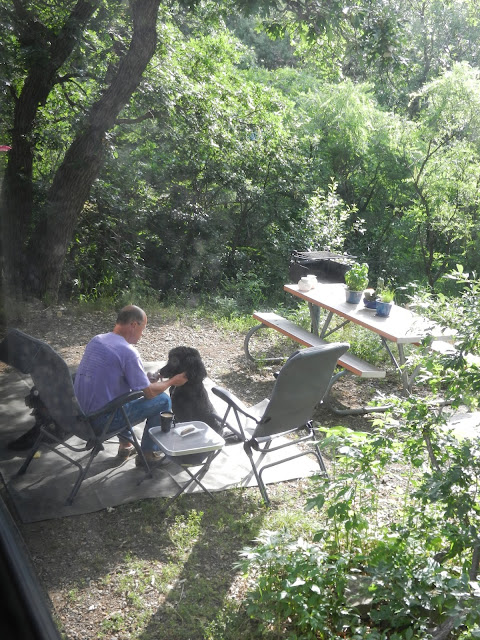 The next morning, after second cup, we drove further into the canyon to see what we could see.    The fire in 2011 was devastating to this area, but it allowed some lush greenery to grow up and it was filled with wildflowers. 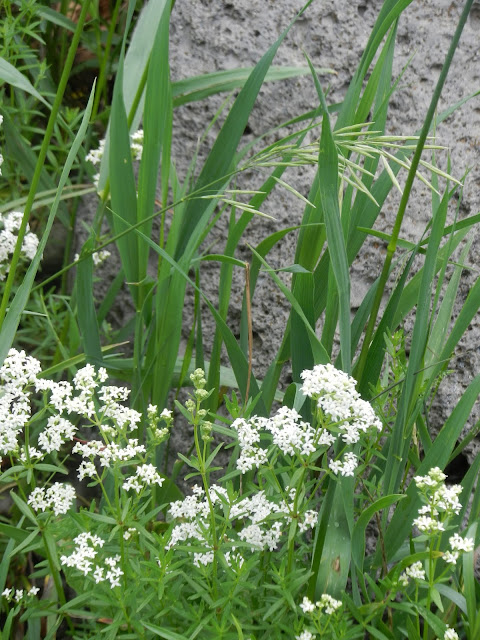 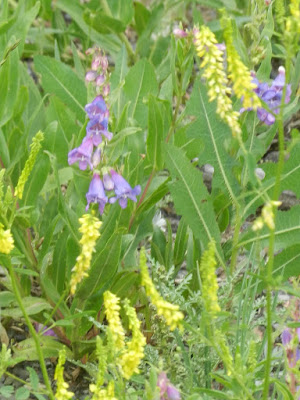 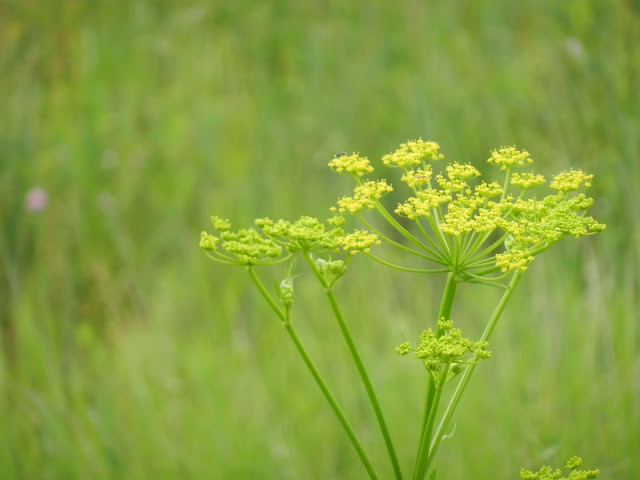 Lake Alice is just a mere wide spot in the creek, but further into the canyon we came upon a much larger lake, Lake Maloya.   We drove over a high earthen dam with a cement spillway letting water out into the canyon.

Bluebirds, Orioles, Grosbeaks, hummingbirds, and various flycatchers were in abundance around the water.    We often stopped abruptly to whip out the binoculars and follow a flash of color into the low locust shrubs. 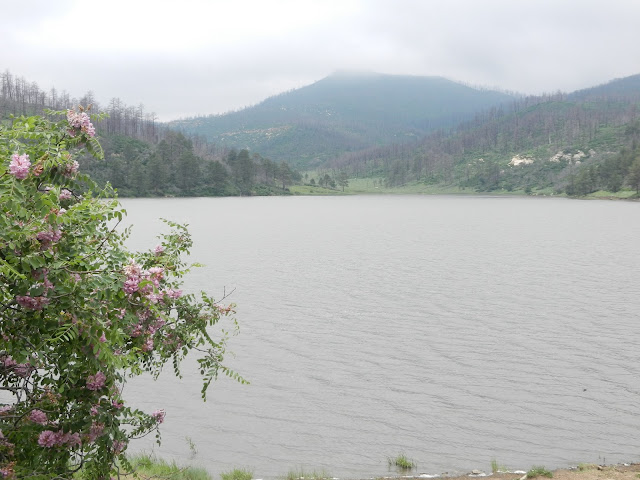 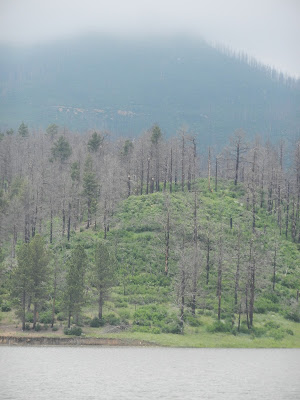 We drove around the lake for a bit, then turned up the hill to check out the other, first come first served campground loop.      It was high on the top of the canyon with fabulous views all around and impressive cap rock cliffs soaring above.  Ole Ben suggested a short but straight up and strenuous trail to the top of Little Horse Mesa for stunning views, but we declined.    It sounded like it was right up Pam and John's alley though! 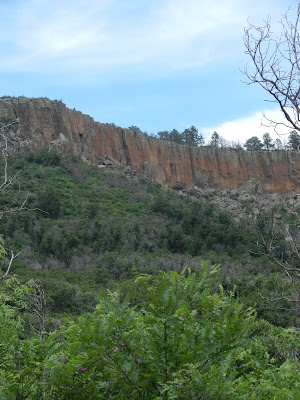 Soda Pocket Campground is suitable for smaller campers as the long road up is rough and twisty.     The road beyond the campsites kept climbing and became a muddy single track so we turned around and set off in search of the nearby (so I thought) Capulin Volcano National Monument.

We drove into Raton and planned on heading east on route 64, but there were several police cars ahead, turning traffic around so we needed to make a last minute adjustment.   It looked like we could take a parallel road (route 72) and arrive at the Volcano, so thats what we did.   The road was parallel to route 64, but it was narrow and filled with holes and heaves.   It climbed steadily up to the top of a mesa where it continued through hundreds of acres of high, lush cattle range land.    We saw not one house for miles and miles.   Dave is so good;  he just kept on driving, assuming I knew where we were going.    I thought I did, but was beginning to wonder!   Long story short, we arrived at the Capulin Volcano National Monument (via the long route)  at 4:15 - and found out it closes at 5.


We just had time to drive up the steep spiraling park road  until we reached the top of the cone, 1300 feet above the plains below.   No guard rails, no shoulder, just two lanes and a terrific drop off.      I didn't lift my eyes from the jeep's floor til we reached the rim and then oh what a view I had.   The ranger said we could see 100 miles in every direction. 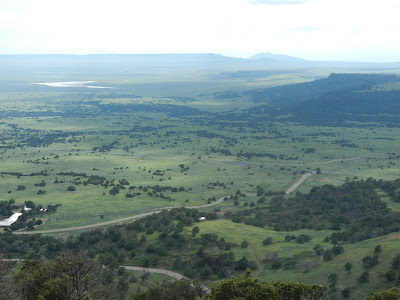 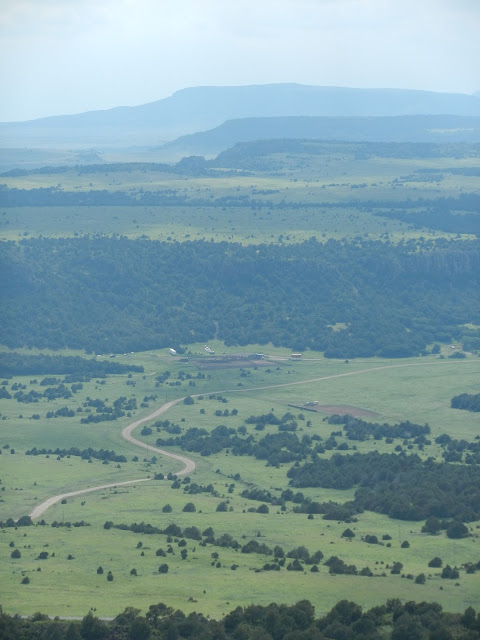 There are a number of trails at the Volcano including a rim trail and a crater vent trail where you can actually walk down into the plugged vent of the volcano!   Unfortunately, poor planning on my part made it impossible for us to take either of these cool trails.

Back down the twisty road we went, this time on the inside lane - much better for me! 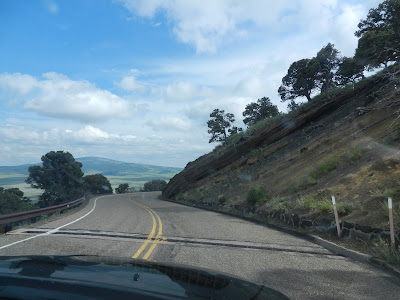 We both thoroughly enjoyed our stop in the Raton area and would most certainly stop again on our way through this part of the state.    We came with absolutely no plans or agenda and, once again, found many unexpected pleasures.
Posted by Suzi at 10:55 PM