The city of Golden holds its weekly Farmer's Market on Saturday mornings.  We seem to remember that fact on Saturday afternoon or Sunday morning.    This week we got our act together and arrived at the Library parking lot by 11.     This is a fairly small but relatively complete market with a number of produce vendors, and the usual soaps, honey, breads and assorted food stands.    Dave tried several samples of horseradish, but pronounced none of them strong enough, his eyes weren't even watering! 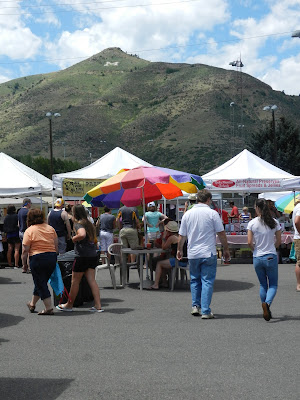 The location is pretty.    It runs alongside Clear Creek with its people friendly park and the views of the foothills make sure you remember where you are.    The "M" on the hillside in the picture above indicates the School of Mines is here in Golden and it has been illuminated at night since the 1930's   These mountain monograms are common here in the west, most often indicating the first letter of the town below, but sometimes they are the symbol of school pride.


To be fair, the picture above was a booth that offered a "bag full for $10" and people took that offer seriously, cramming as much as humanly possible in the offered plastic bag.    It wasn't to pretty.    This wasn't the Eugene Farmer's Market, to be sure.

At another booth.....we bought a few things to take to Jesse's for Sunday dinner.  I'd go back another Saturday, but I would definitely would avoid the $10 a bag booth.

When we got back home we saw that our very good, most excellent and quiet long term neighbor had moved on and someone new had taken his place.    The site we're in right now isn't my favorite but with the good neighbor next door it has been very livable.    The configuration of the pull thru's at this campground cause two sites share the large green space between them.     We have claimed the picnic table nearest our door and it is home to our basil and cactus plants.   Its where we sit for second cup and, if it isn't raining, for happy hour.   Sasha snoozes in the grass nearby and Lewis shoves and kicks his ball around while we chat and enjoy our beverages.

Guess where the new people have moved their picnic table and chairs?    I just don't get it... 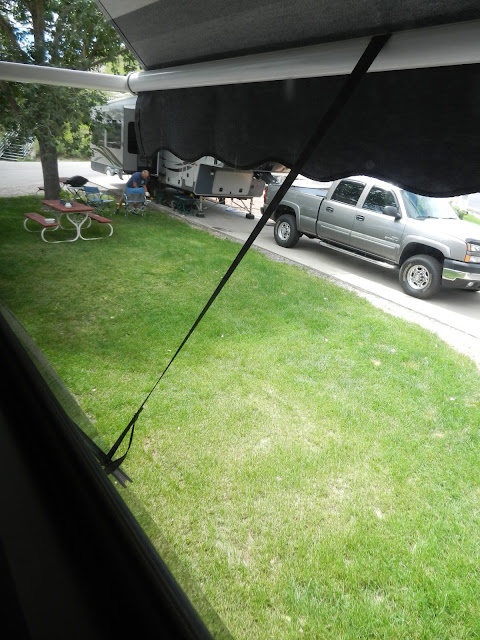 Ah well, we're moving to a back in site next Monday so until then we'll just have to deal.