You might expect this blog to be a long one, since it is titled "Wednesday and Thursday".....two days worth of things to tell you and show you.

We had an appointment for the Jeep on Wednesday morning, assuming it would be a few hour fix and we'd be ready to head up to Estes Park on Thursday, as planned.    We were wrong.

The air bag warning light and its alarm have been pestering us for a couple weeks. The power door locks have been behaving oddly and occasionally the radio would change stations against our orders.   Once we came back to the jeep after lunch in Boulder to find its rear hatch back open, exposing all our good "junk" to passersby.     Gremlins, poltergeists, computer glitches - we made an appointment to find out what was going on and yesterday was the day.

Dave dropped it off at the jeep dealer and walked the mile or so back to Dakota Ridge.   We spent that day doing domestic chores, taking care of bills, reading and spending time with the dogs.

The weather cooperated and we had a sunny warm day with no rain!   We spent a fair bit of time outside, making hay while the sun shone... 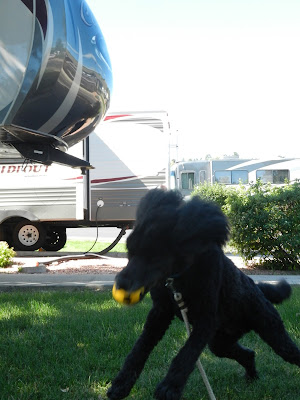 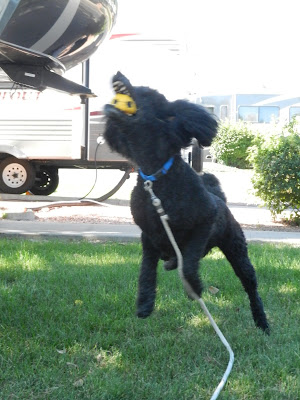 The jeep wasn't fixed by the end of the day yesterday so we found ourselves stuck here without wheels for another day.   We had planned on going up to Estes Park and Rocky Mountain National Park, but it would have been a really long walk so we did the same things today that we did yesterday.    Read, play with the dogs, paper work, phone calls (we're dealing with an extremely annoying and long running insurance/trust issue) and a bit of cooking (which yielded a disappointing dinner). 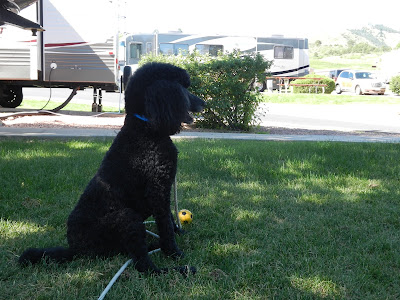 A family with two adolescent girls moved in a few sites away.  Lewis didn't enjoy his outside time after they came.   He couldn't let them out of his sight, even his beloved ball held no interest when they were around.    Both girls had unicycles and rode them endlessly up and down our row.    Kids on bikes are scary enough, kids on unicycles evidently present even more danger to a black poodle.


I didn't take pictures of Sasha in her usual happy hour/cocktail hour pose because you've all seen her flat on her side, snoring.     I do, however, have one of her dozing by the table as we ate our ham and cheese sandwiches this afternoon.


We always share a bit of our meals with the dogs, after we've finished eating.
They don't beg at the table, they wait quietly until we're completely done and don't complain very much if we forget to share once in awhile.    Sometimes Sasha works so hard at being a good girl and not begging that she nods off and doesn't even notice the odd bit of cheese or slice of juicy ham offered.   Sometimes she doesn't notice for a long time......


Lewis, good boy that he is, never steals the tidbit intended for Sasha.   He waits til she wakes up and scarfs up the goodie before he comes near - just to make sure she hasn't left any crumbs on the carpet.  He is nothing if not neat.

See?   You should have heeded the Boring Couple Alert before reading tonight's blog.

p.s. we got the jeep back this afternoon around 6, all fixed (we hope....).     We've missed our Estes Park "window" for this week.   We learned our lesson not to attempt a drive into the mountains on a weekend.
Posted by Suzi at 10:16 PM