We're settled into our site at Tucson's Lazy Days KOA.  We're all having a bit of culture shock adjusting to these accommodations.   Beluga is backed in to a nice gravel site with paved patio and round table/chairs.  There are fruit trees, laden with oranges and grapefruit, between each spot and  behind us is the  rv storage area.   I requested one of these sites so we'd only have neighbors on three sides...
Last week we were in a small and un-busy (is that a word?) dirt and gravel rv park in the middle of nowhere.   Not much going on there except a golf cart or two passing by and the sound of yipping coyotes at night.

Here we're in the middle of Tucson with very active train traffic at night and lots of people/dogs/rv's/cars/bikes running along in front of Beluga most all day long.

Good things about both places, just a bit of an attitude adjustment.

Pam and John are diagonally across the park from us and Steve and Mona Liza are two sites down.    Tina and Ron and their dogs are near Pam and John so we've lots of friends around.

Last night we were invited to Steve and Mona Liza's house for happy hour.   Boy was it ever a HAPPY hour when we discovered that Mona Liza was preparing her famous Lumpia for us!    I took no pictures, I just ate and talked and drank.
Thanks Mona Liza!

Today Dave and Steve gathered their ladders and assorted tools and set about helping John remove and replace his slide toppers.


I'ts not a one man job and many hands make light work.    Lewis likes to be one of the "boys" but his lack of opposable thumbs make him a clumsy helper.   He's very sweet so we humor him. 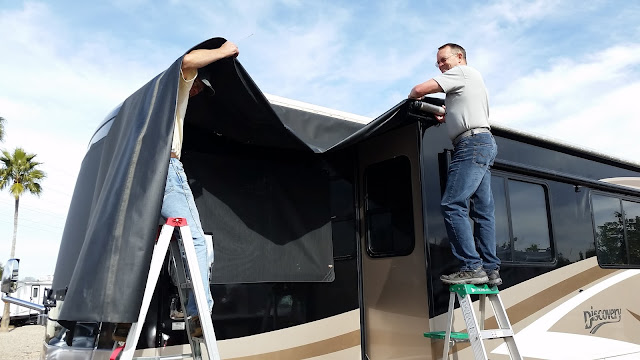 Pam made us a luscious lunch after the job was done and it was wonderful to be able to sit outside to enjoy it.   Its been a long time since we were able be outside without moving around vigorously to stay warm.

We have a number of things to do here in Tucson this week, and plenty of socializing to boot.
Posted by Suzi at 9:38 PM