Its Thursday already, we only have about a week and a half left here.   I really don't know where the time goes.

After a nice long catch up phone call with Cindy P,  we drove into Littleton to get a few errands done and on our way home we found our usual route blocked.


The lead tractor trailer driver made a grave miscalculation and his rig was stuck fast in the ditch with the load across both lanes of the road.   The second rig had a very flat tire so it was clear we needed to find a new way home.

We wondered where the first truck thought he was going because it appeared he was headed directly into a roadside pasture complete with extremely nosy horses. 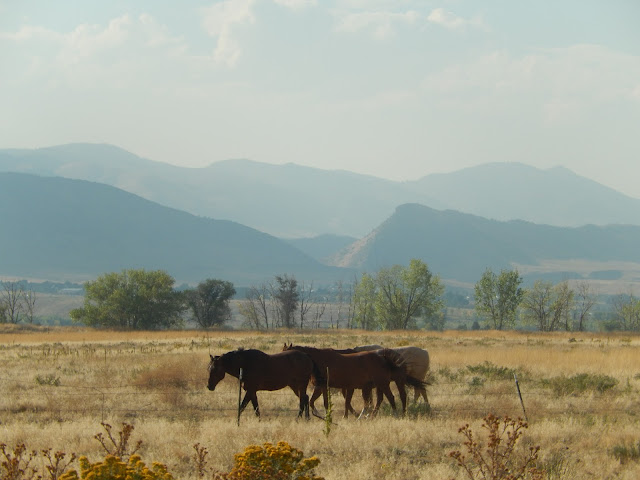 Today's weather was beautiful, but odd.   Sun was warm on our faces, wind very cool on our backs and a deep layer of fog lay over the ridge of mountains to our west.   It came and went, heavier and lighter, as if it were a living, breathing thing.    Quite interesting to watch. 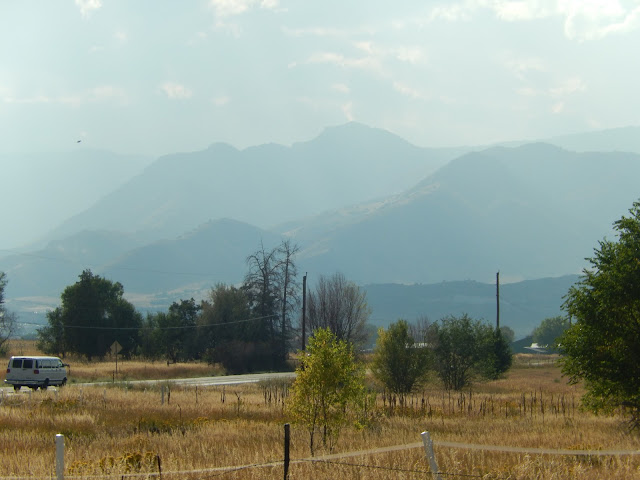 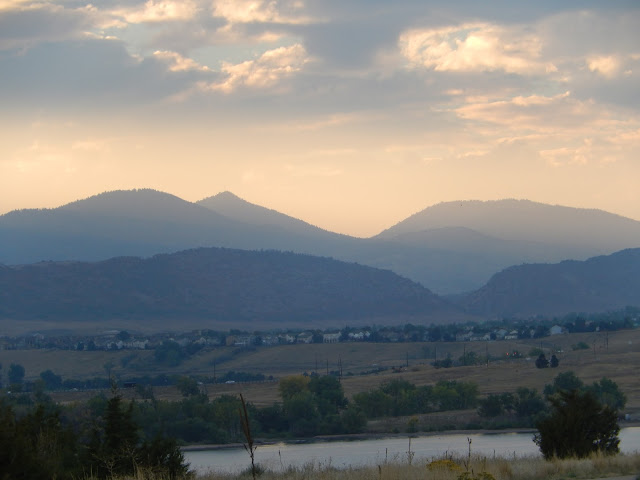 After lunch yesterday, Wednesday, we drove in to Jesse and Erin's house.   Jesse's back is improving but Dave was happy to cut his grass while he continues to take care of himself.    Its very tempting to get back to normal as quickly as possible and we all know that is when real problems can crop up so we were glad we were able to help out.    I took advantage of their huge new washer and dryer and did a couple loads while we were there.

After Dave had the lawn in hand he used Jesse's little garage wood shop to work on his stool project. 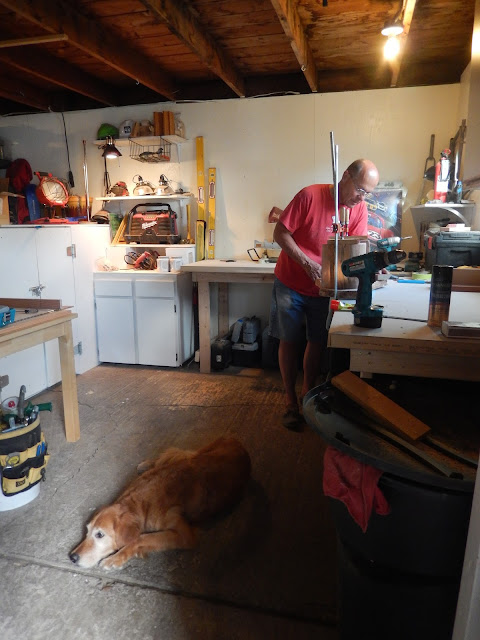 Kikan kept him company, she doesn't have any real work shop experience but was happy to lend support when necessary.

Erin had a class in the evening so after Jesse got home from work the three of us went out for a delicious Greek dinner....sorry Erin!


We've been doing a bit of exploring while Jesse and Erin are working.    One day we discovered a really fun drive on forest service roads a bit south of here, along the Rampart Range.    We took route 85 out of Littleton to Sedalia and continued south on route 105 to route 67.    It was a beautiful ride through a long valley dotted with well kept horse properties and white fenced cattle pastures. 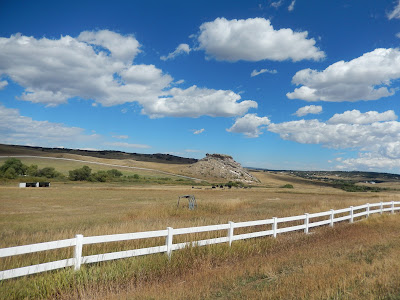 We turned off onto Dakan, a moderately wide dirt road heading directly up into the mountains.   It twisted and turned, back and forth, then turned into a forest service road.   I didn't keep track of all the road numbers as we drove the 25 or so miles up and through the mountains.    We met very few others along the way. 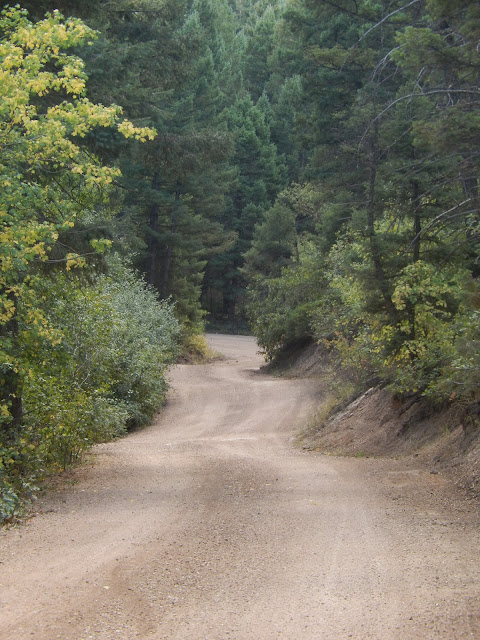 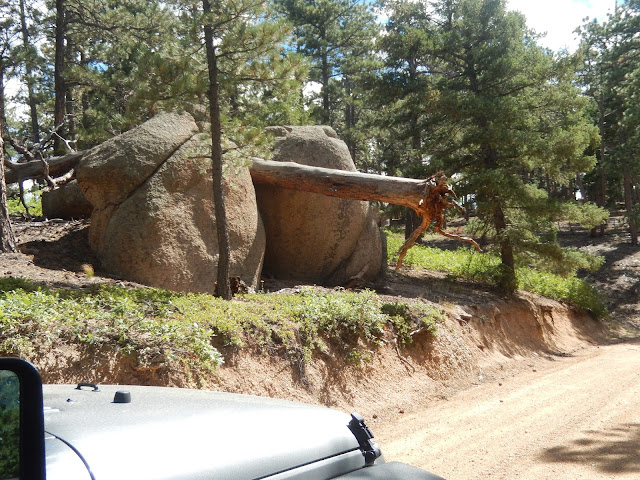 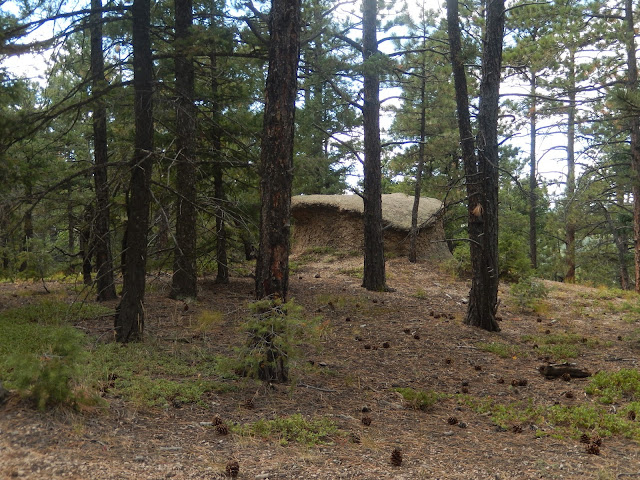 The road wound through deeply forested areas sprinkled with odd shaped rock formations.      It was wide, smooth and flat, dusty,  sometimes narrow and twisting with sharp switchbacks, "on your nose" descents and very steep and deeply rutted ascents and sometimes across broad areas of rock.    Fun! 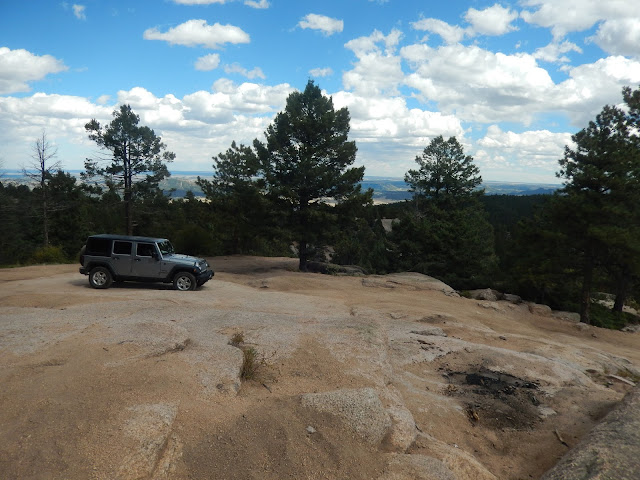 Sometimes we stopped off the road and explored interesting areas. 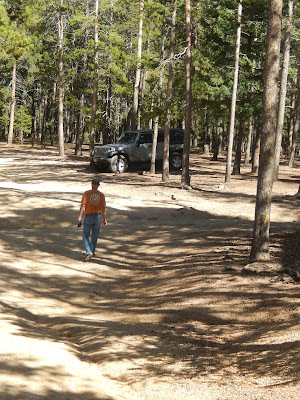 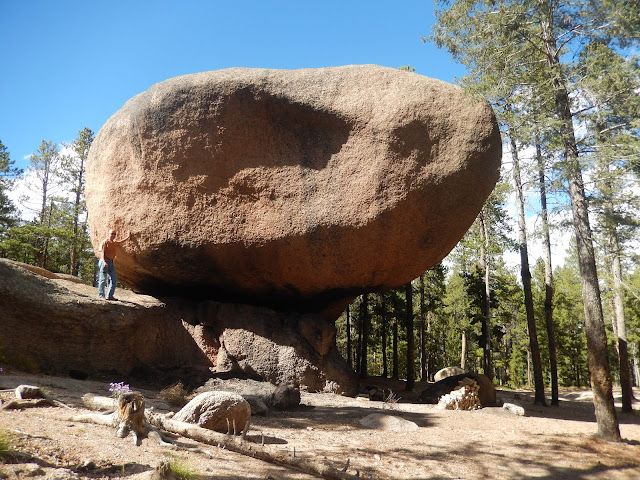 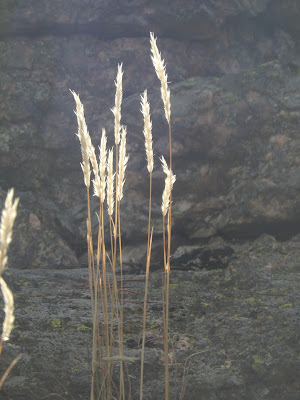 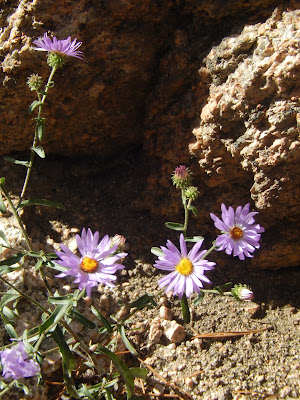 We spent more time than we had planned in the forest so it was getting late and we were quite a long way from home.    We came down off the ridge and ended up in the small down of Deckers.   Along the way home we found ourselves following the South Platte River in an area full of huge boulders and made a note to return for a more leisurely exploration of the riverside.

A few days later, after spending a bit of time pouring over our Colorado Gazatteer, we thought we could find that road again.      We did.....and spent a lazy afternoon driving and walking along the beautiful South Platte. 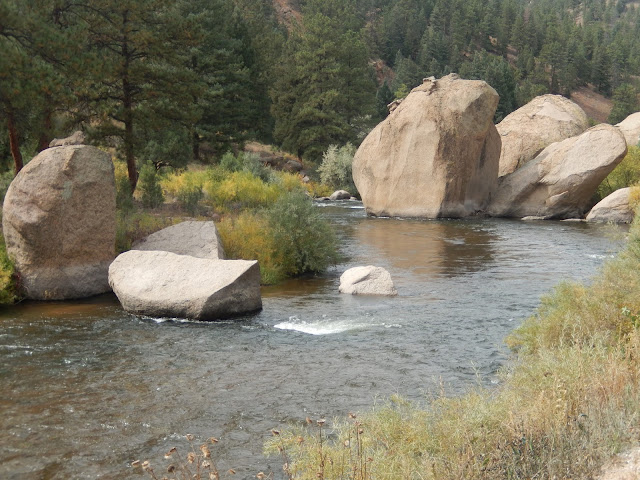 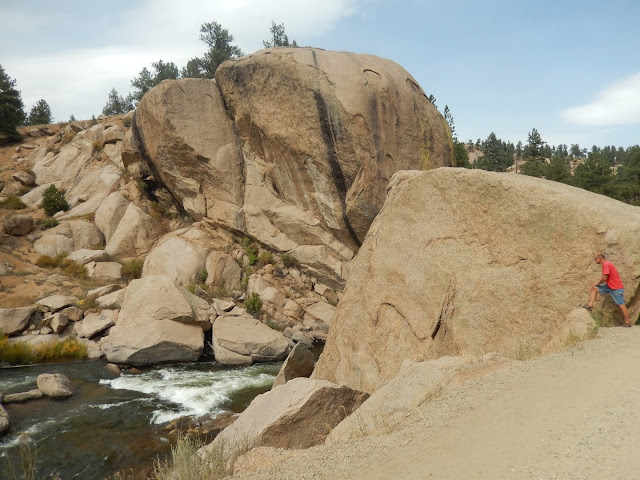 The river in this area is choked with huge boulders that shape and change the flow of the fast moving river. 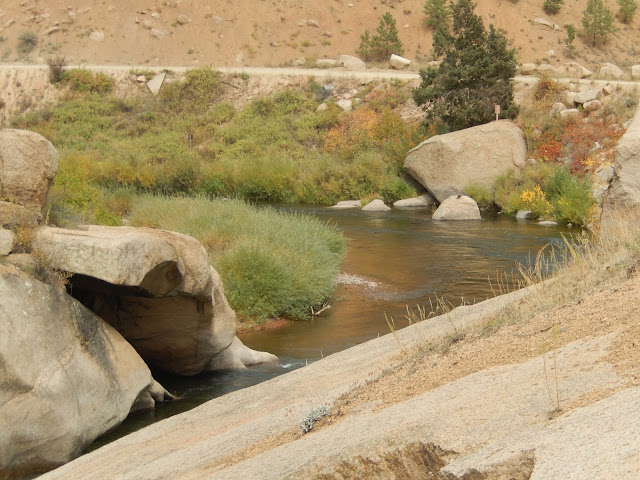 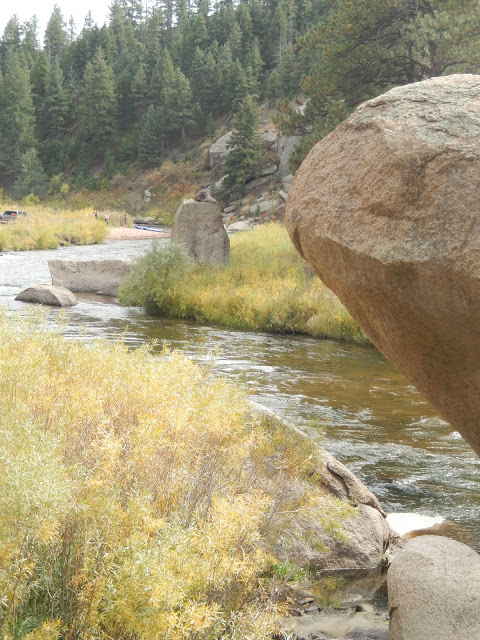 We saw two men in kayaks heading for one particularly narrow spot so we found a rocky ledge and settled down to watch them shoot through.


We met a woman standing nervously above the kayaks.   The boats contained her husband and her son and she was worried about her son's ability to handle his kayak in this water.    She told us she had been a whitewater kayaker for many years but recently took a "serious swim" that ended her river jaunts.    She and her husband has sold their California home last month, bought a truck and new Airstream trailer and set out to see what this country looks like.   They were in the area visiting the son below, who lives in Denver!    Small world....

I sent her the pictures I took of husband and son navigating the narrows in fine form. 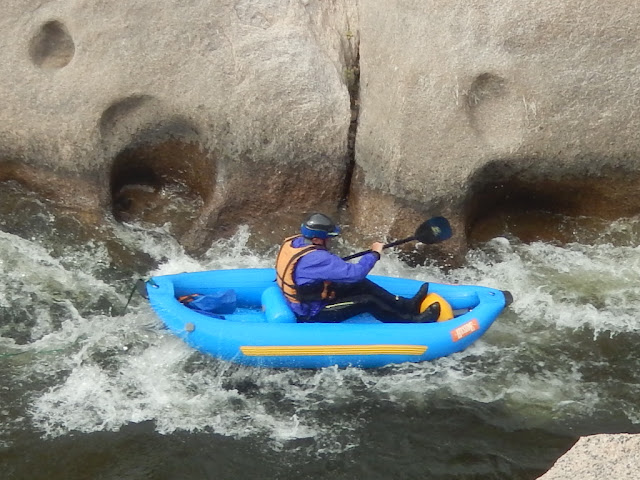 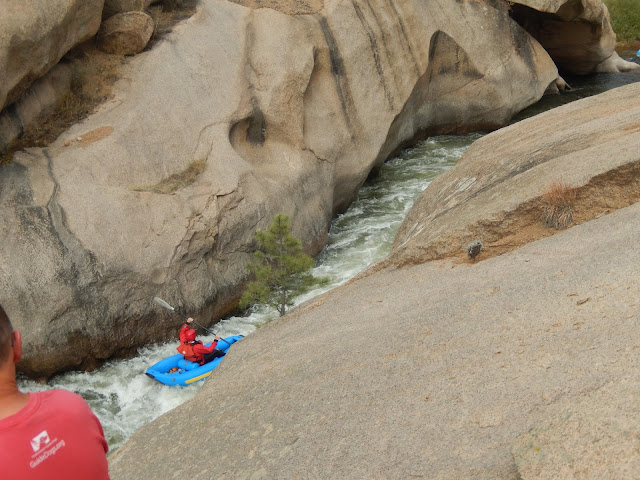 The signs of fall were all around us as we moved along the river.    Aspens were turning golden, bushes and random leaves were beginning their transition. 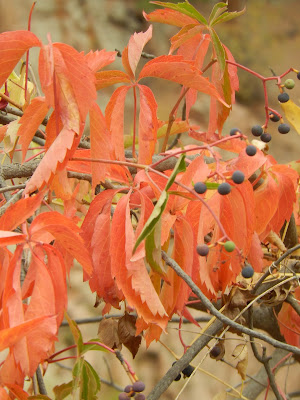 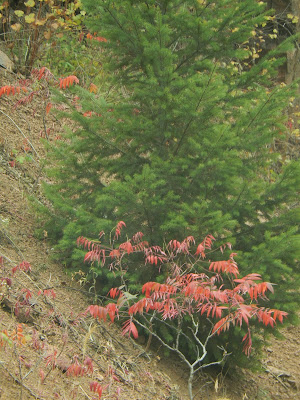 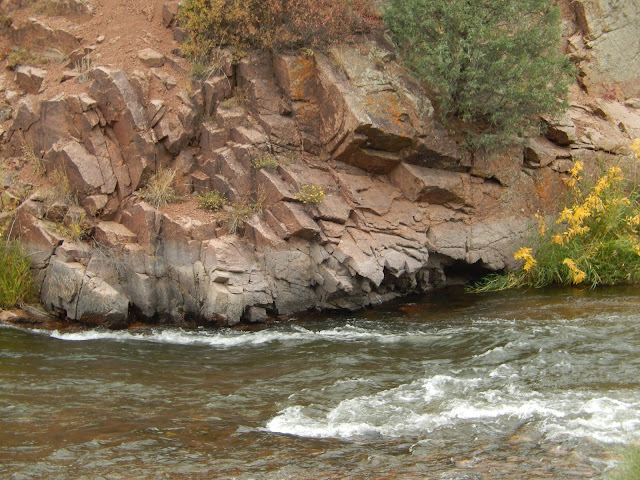 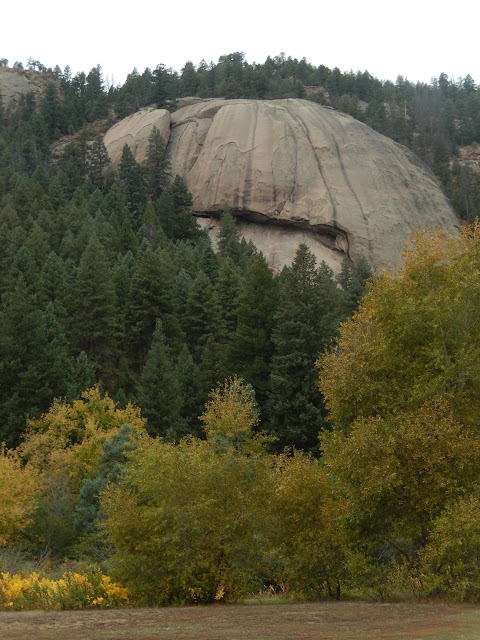 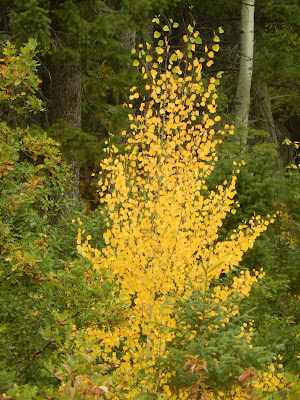 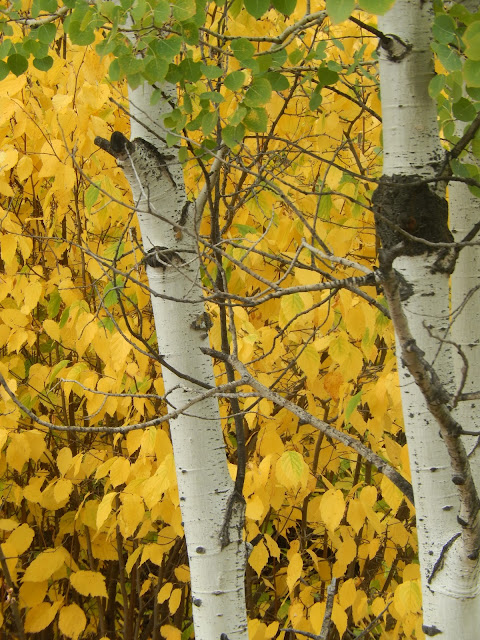 The persistent fog layer in the mountains didn't allow for a pretty sunset tonight, but we weren't altogether disappointed.... 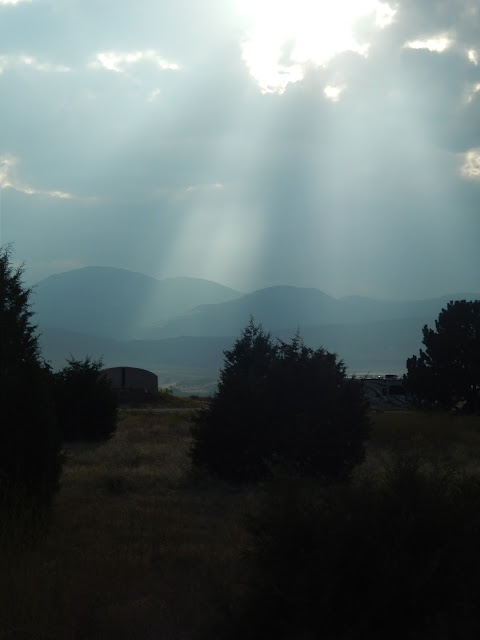