Notice....much of this post contains far too many pictures of red rocks.  If that is not an interesting subject to you, or are easily bored , perhaps you should not proceed.....I can't imagine that but I felt I should warn you......


We're now in Mesquite, Nevada at the Solstice Motor Coach Resort.  Motor Coach Resort is really a misnomer because we are one of only a few actual motor coaches here.   And.....it is hardly a resort at this point. 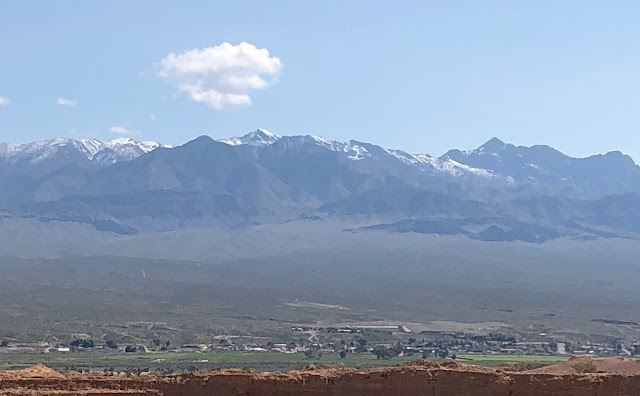 The views are magnificent all around, high atop a mesa.  The sites are huge and well laid out.   The park has much potential and I'd stop here again if only to see it's progress.   It was built just before the 2008 crash, the owner went bankrupt and maintenance seems to have been deferred since then.  I understand, however, that a new owner has taken over and has grand plans.   We see much work at the level below us and have been told that it is going to be the new section with about 100 luxury sites.    When that is up and running, our area will be completely renovated and re-landscaped.   Much potential for a lovely first class resort if all goes as planned.

Yesterday John and Pam drove up from Boulder City to join us, or lead us, into Gold Butte National Monument.   The area covers about 300,000 acres of desert between Lake Mead National Recreation Area and Grand Canyon-Parashant National Monument creating a continuous swath of conserved land.   It is a magnificent and wild place, free to us all.     Some members of Congress have called for it's National Monument status (along with Bear Ears in Utah) to be revoked.


Gold Butte Road is the way into the Monument and is paved.   That, however, does not mean smooth pavement.   The first 20 or so miles of pavement was some of the roughest road we've ever driven on.   It combined tooth jarring potholes and broken pavement with moments of smoothness that had us both swerving from one side of the road to the other and then, lured by the smooth spots, slamming on the brakes.   It was a long 20 miles.     But oh so very worth it. 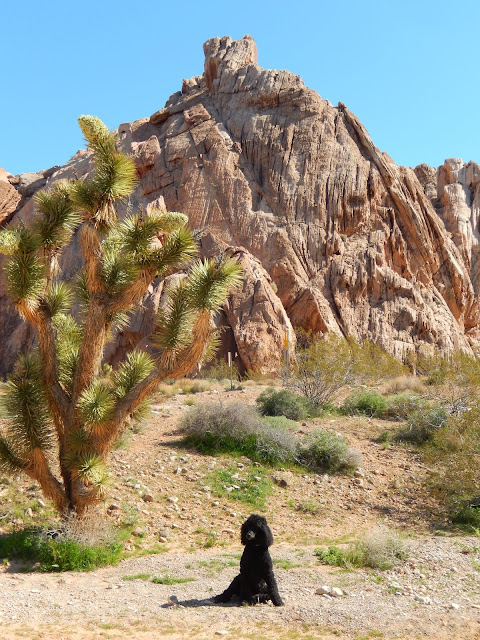 Once we reached an area called Whitney Pockets the "road" became dirt and stone and much easier to navigate, although not necessarily smooth.   Our destination, "Little Finland" was still many miles of dirt track and wash driving ahead,  but the scenery was great. 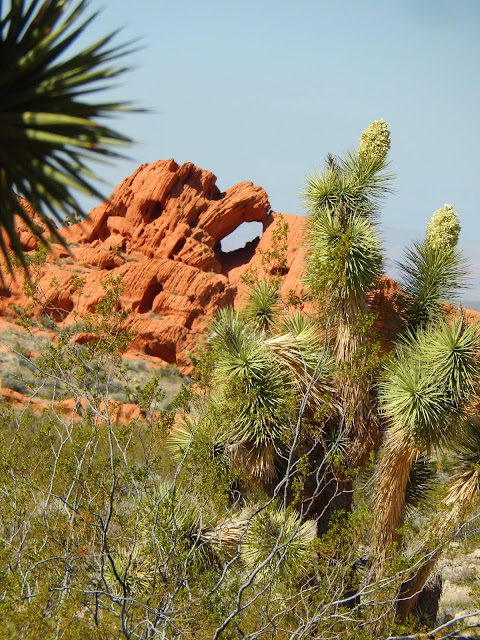 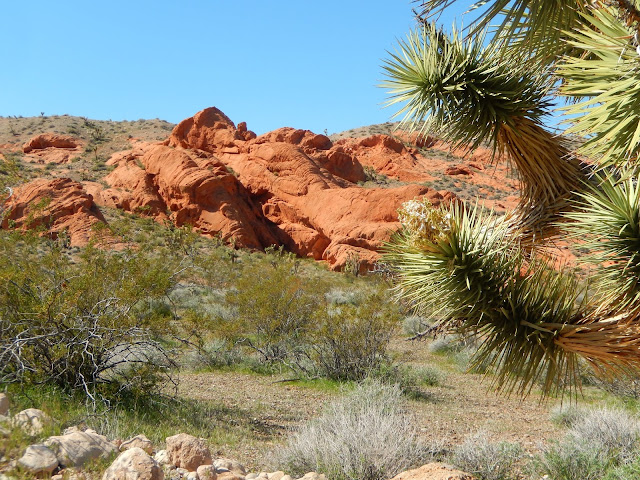 Eventually we arrived.    We took two different routes into the fins, Pam and John parked and hiked/climbed in the south end and we drove a few miles further in a damp wash and drove up a steep, sandy track to the top.   We began our exploration of Little Finland at the north end. 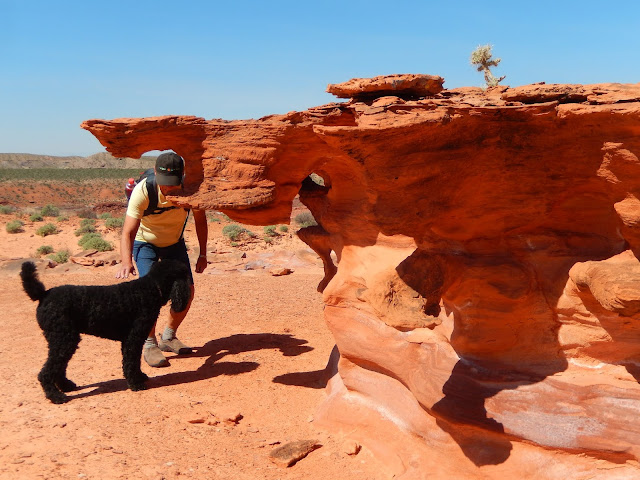 We knew we'd meet them at some point as we moved south and they moved north.    We were sitting in the shade of one of these other worldly formations, eating lunch when they appeared, climbed down and joined us.   Lewis was overjoyed to see them again!   Dogs are so great, each meeting is like the first time!

After lunch we crawled up and around and over the area, ooohing and ahhhhing as we went.   Lew completely ignored us and stayed with Pam and John the whole time.    We don't mind sharing. 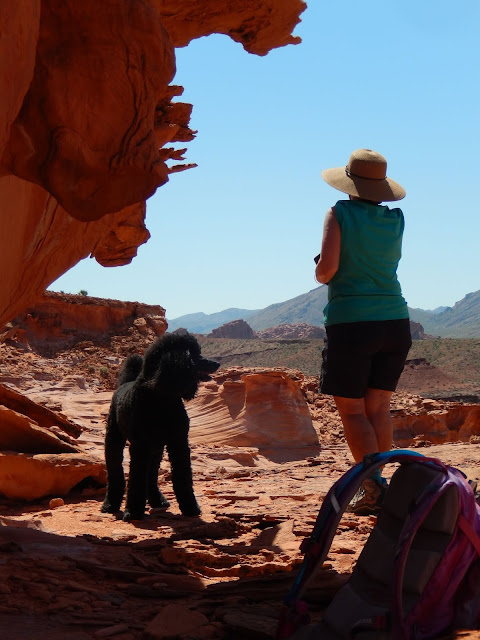 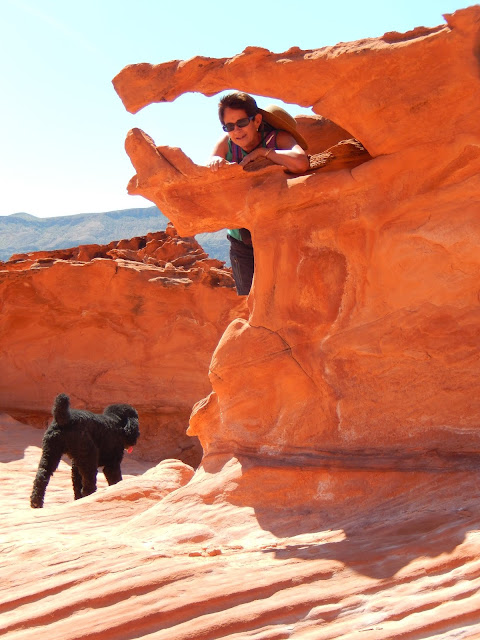 I'll let Little Finland speak for itself for awhile.... 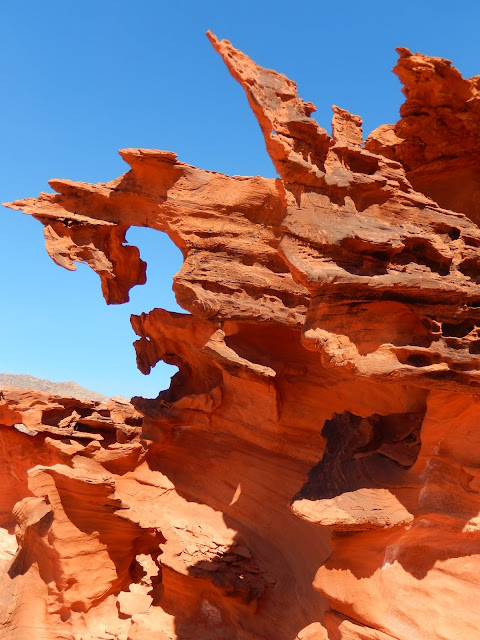 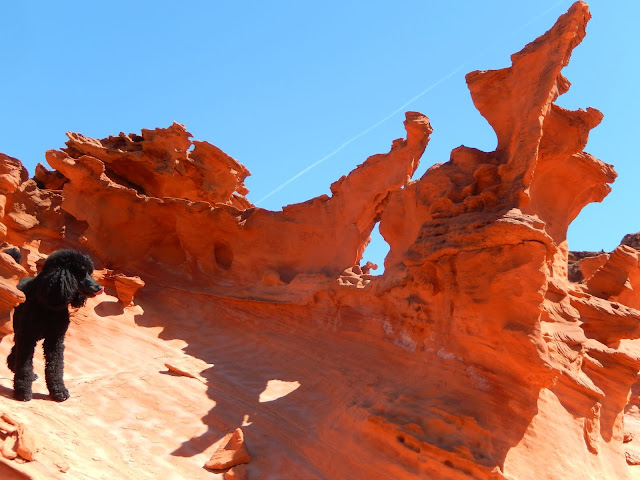 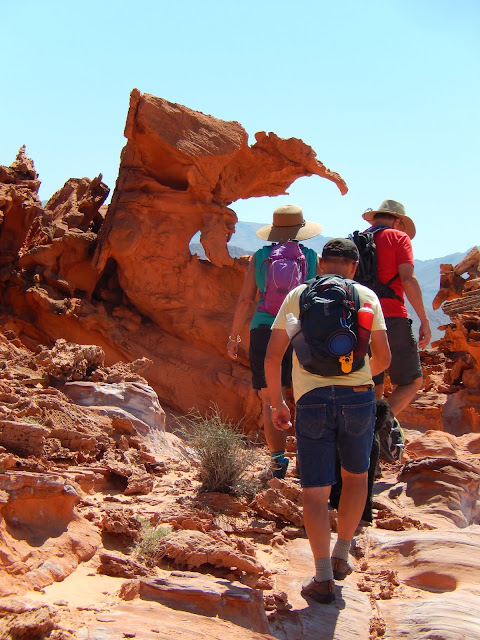 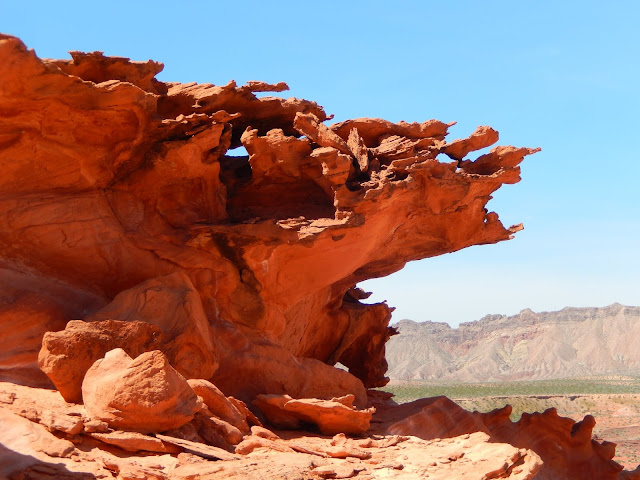 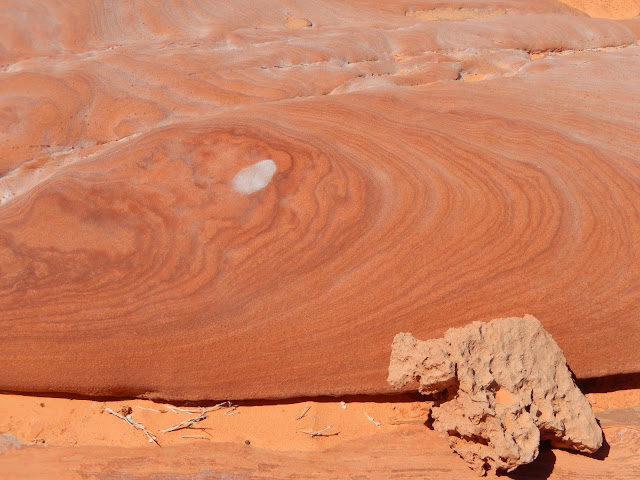 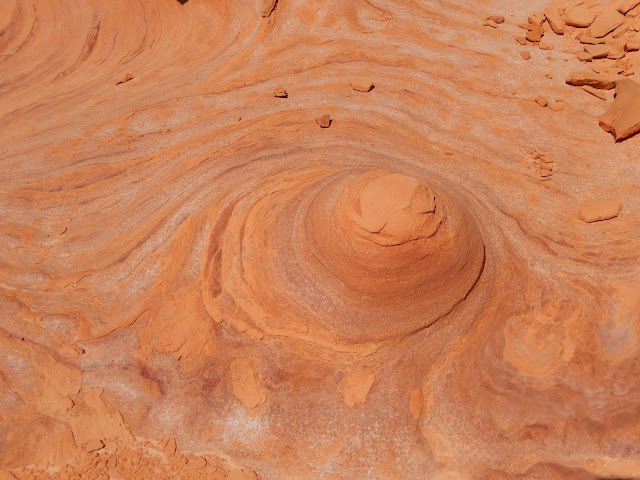 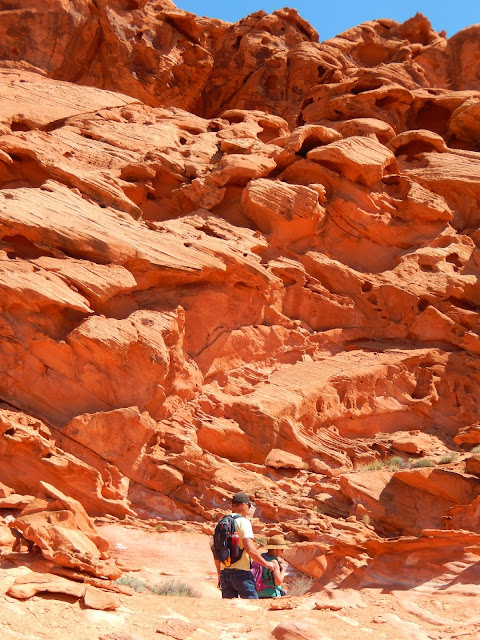 Pam and John hiked back to their jeep and we to ours.    Once we were together again we set off for one more quick stop.    Even though we started out fairly early we just didn't judge the time we'd spend driving or exploring so Pam had to scrap her plans to hike to a few other sites.   Next time. 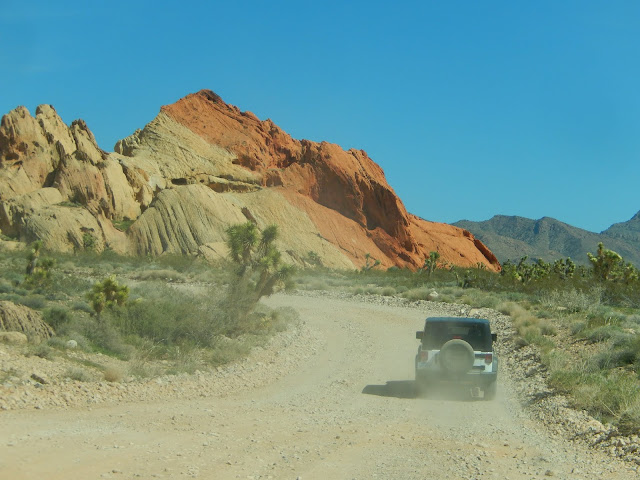 Just .3 miles past Whitney Pocket we turned in search of an CCC dam we'd read about.    John and Pam spotted it right away and we pulled off to investigate....John in the lead. 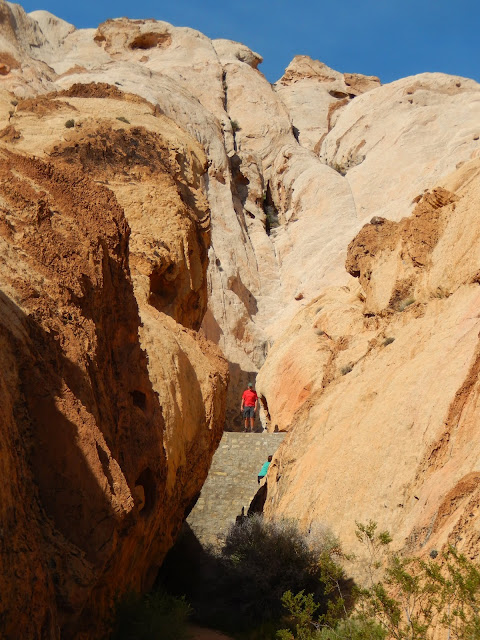 We went around behind the front of the dam and found a steep set of stairs set into a narrow space between the rock walls. 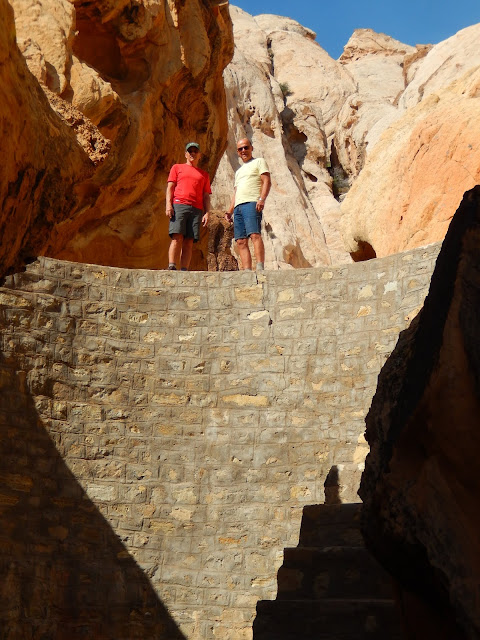 Across the "road" was another interesting looking site so we went over to check it out.


We left with so much more to see.   There was talk about going back into the Monument today (Tuesday) to continue, but it was decided that none of us had the desire to tackle those roads two days in a row.....next time. 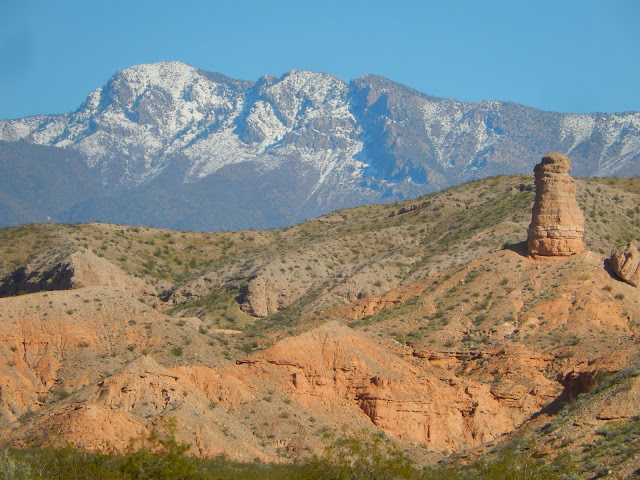 Pam and John checked into their motel, showered, then picked up Pizza and came over to Beluga for a last get together before we all go our separate ways.

Beluga will carry us off to Kanab, Utah in the morning.
Posted by Suzi at 11:33 PM