Nothing exciting happened today.  I guess thats a good thing.  It was cloudy most of the day, although the sun did come out late in the afternoon.  Coolish too.  Fall coming?    We had our coffee/tea inside for the first time in a long while. 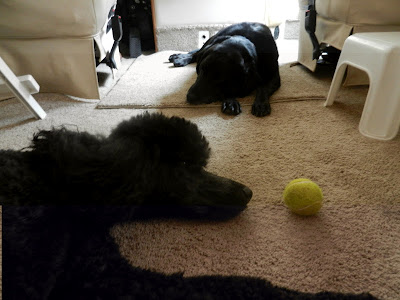 Even the dogs had a lazy day.  Lewis is usually on "pause" though, not pushing, but always at the ready in case anyone has a minute to play ball.....  Sasha, however, snored noisily.

Dave finished washing the screens and later we took the throw rug in to a carpet store to have them re-bind one of the sides.  Lima Carpet (back home) did a terrible job with our carpeting.   I've lost count of how many times pieces had to be returned for a fix - only to have their "fix" not hold.....They have handed us every excuse under the sun. 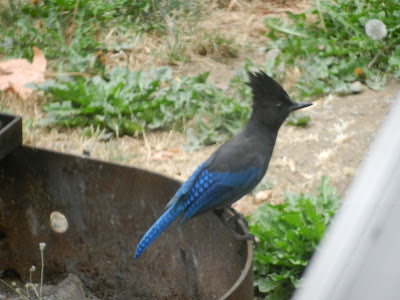 We had a fire drill "brainstorm" session when Dave had the escape window above the bed out for screen cleaning. Its a really scary thought, having to get out through that opening, but its a good thing to practice once in a while. I think we're as prepared as we can be for such a terrible event.

After we dropped off the rug we went to Jesse's to let the girls out and feed them their dinner.  Jesse and Erin  drove up to the Portland area to do a bit of "back to school" shopping and we were happy to take care of the dogs so they could enjoy a more leisurely day.     We'll meet them for golf tomorrow afternoon and then dinner at King Estate Winery.  Fun day Friday.
Posted by Suzi at 11:28 PM