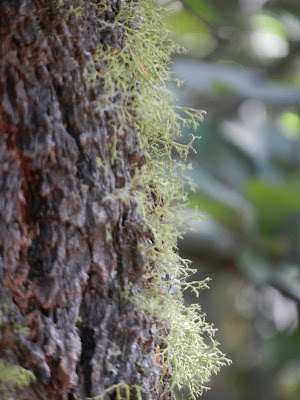 Cold night. It was the coldest night so far for us.  That propane furnace was so wonderful in the morning....warmed us up in no time and Sasha really likes to park herself in the "heat hole"...

Restless night.  Dave's tooth is bothering him, root canal in his future?  We'll have to find a dentist in Eugene when we get settled there.  Jesse has a couple good contacts, so he should be ok soon.

We left Holiday Farm RV resort this morning around 10:30.  We've made this drive a few times, but I still enjoy it.  The road is good, the scenery is very pleasant, and the time passes quickly.

We drove through filbert groves (hazelnuts) and along the McKenzie River, in its calm, placid form.  We arrived at the Freightliner dealer around noon and while Dave worked out the details of the fix with the service people, I made a quick lunch for us.  They took Beluga right in and the four of us ate our lunch in the parking lot,  Wooo Hooo!  The dealer had overfilled the oil by a couple gallons last week during a routine service appointment, and that is a dangerous situation for an engine.    Luckily, Dave noticed the overfill when we got to Holiday Farm and called right away.  I don't know what would have happened if he wasn't such a vigilant owner..    After much negotiation, we drove away feeling as if we were ok, but certainly won't give them any further business.

Later, Armitage Park received us like an old friend.  We settled right in to our new site and made arrangements to get pizza and share it with Jesse and Erin a bit later on.  I'll post a picture later, or on tomorrow's post.