Friday's adventure turned out to be more exciting than we like

Friday's destination was Mt. Hood.    When Jesse was younger he spent a few summer weeks there at snowboard camps, so the area has always seemed familiar to me even though Dave and I have only been there once, briefly.

The weather forecast for the weekend, beginning Friday, was for triple digit heat so we thought it was a good idea to head for the glacier capped mountain. 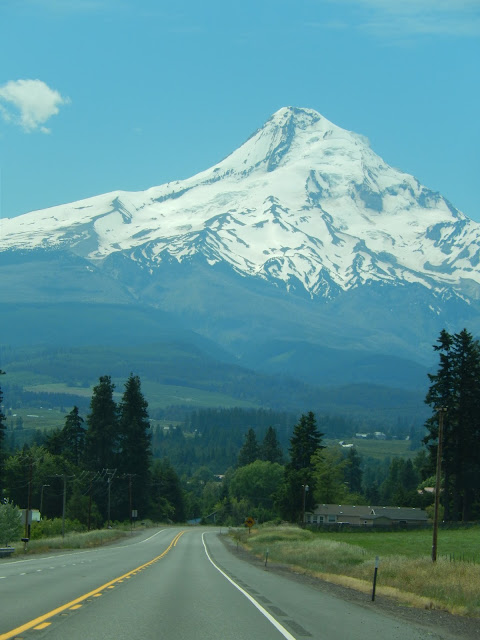 We left our park and entered I-84 traveling west toward Hood River and rt 35.   Just a few miles along the highway, one exit from Memaloose State Park, we saw thick black smoke beginning to rise from a point on the ground, quite close to us. 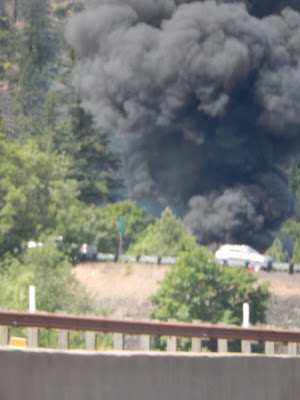 We could see flames shooting up from the ground but couldn't quite make out what was on fire.    I thought perhaps it was a truck or car fire, but Dave felt it was something much bigger than that.      We were glad we were able to pass by it quickly and hoped, whatever it was didn't cause a forest fire or shut down the highway.

We stopped for lunch along the Hood River, we enjoy the sound of the rushing water and the birds flitting around its shores.

After lunch we continued toward Mt. Hood, stopping here and there to take in the views.    It was a beautiful day, sunny and quite warm.    Much different than our first days explorations. 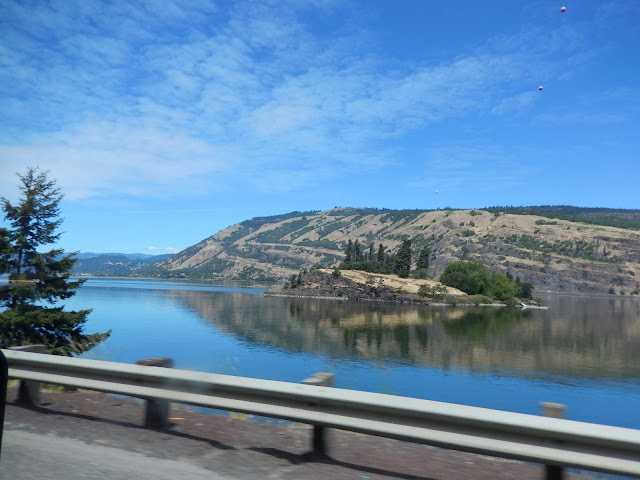 The mountain's white peak was in front of us all the way.  We came to a bridge over the White River and were finally able to see most of Mt. Hood.   We pulled in to the huge White River Sno Park's parking lot and scrambled over the rocks to the small rushing stream that is the White River at this spot. 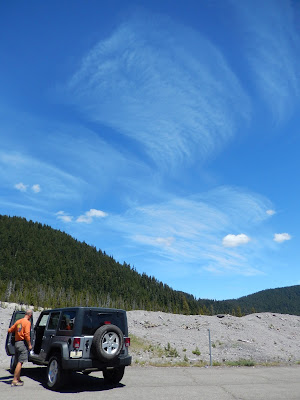 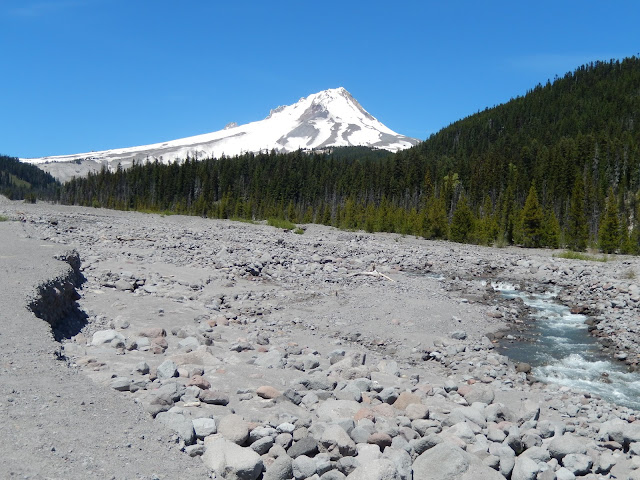 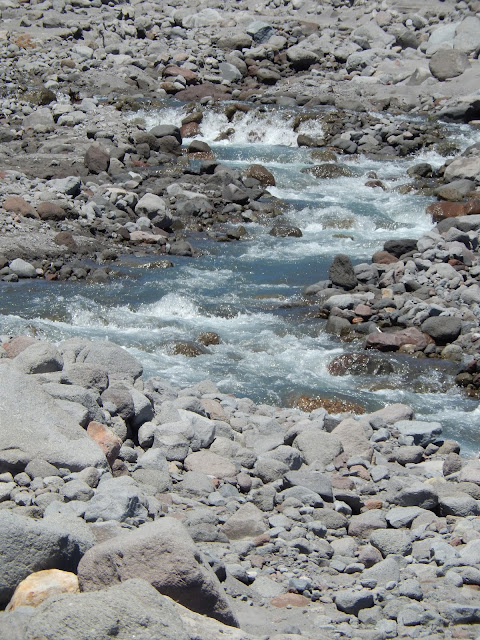 We chatted for a few minutes with a man showing his kids the river.   He suggested, strongly, that if we were going to be in the Government Camp area (on the slope of Mt. Hood), we should pay a visit to the Huckleberry Inn for one of their famous Persians.    OK, if we have time,  we thought.

The rest of the road up the mountain to Timberline Lodge was through deep forest with lots of small, pretty waterfalls tumbling out of the high side of the road. 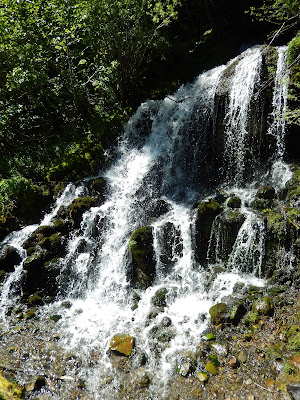 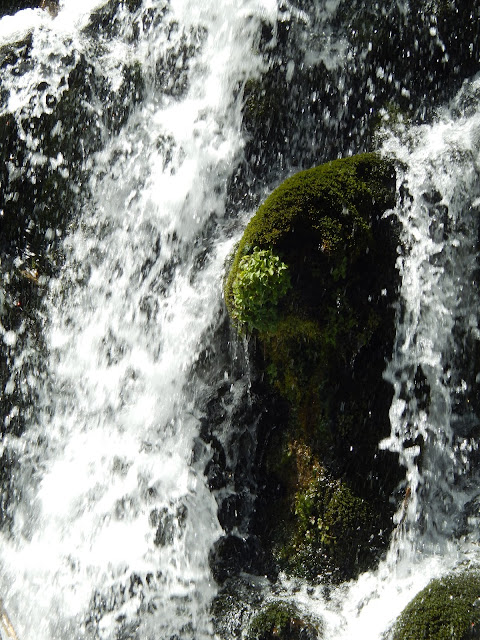 We explored the beautiful Timberline Lodge, inside and out. 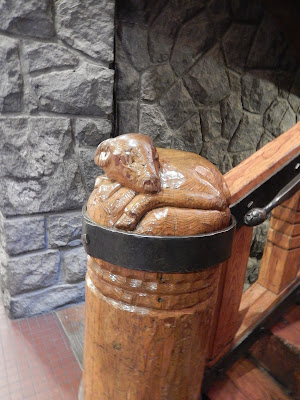 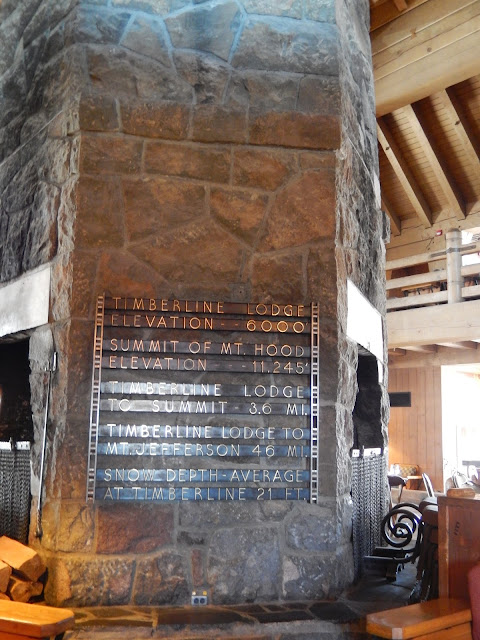 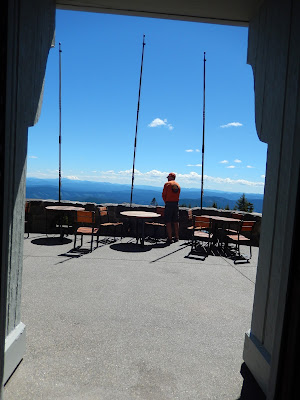 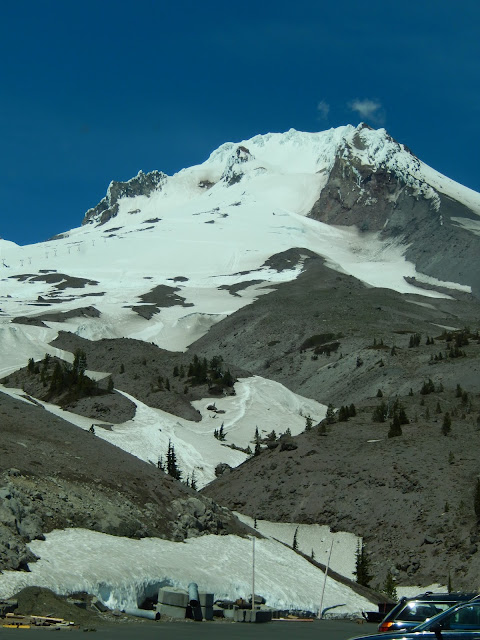 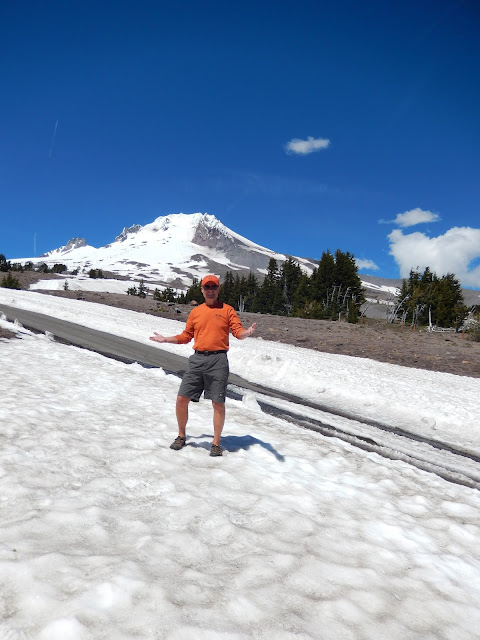 People were skiing and snowboarding and enjoying the lodge's restaurants and patios.    We spotted a beautiful blue alpine lake in the distance so it became our next destination.     After a very quick stop at Government Camp....we were curious about what a Persian roll was.     Mmmmmm, it was delicious!

I hope you're not tired of seeing snow covered volcanic peaks, with their heads in the clouds, being reflected in blue alpine lakes.....oh good, then here is another one......


And, are you tired of seeing Dave looking out over said alpine lakes?   Well, here's one more.... 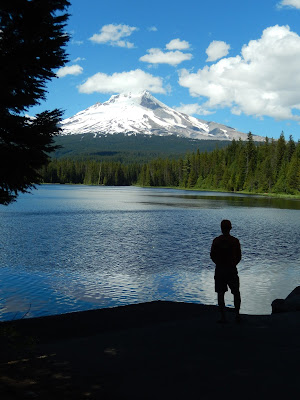 We made it back to the intersection of rt. 35 and I-84 in Hood River about 4:30, another 10 miles or so down the interstate to Beluga.    Just in time to feed the dogs and enjoy happy hour outside.     So we thought.    As we approached I-84 we could see that the traffic was stopping.    Closer to the entrance we could see that not only was the ramp closed, but the highway, itself, was closed.   Police were directing traffic through Hood River, over the bridge and into Washington.
Friday night at 4:30 is not a good time for traffic anywhere, but with a very busy artery closed in both directions was really not a good thing. 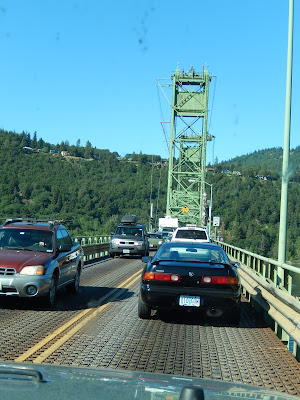 As we crossed over the Columbia River we looked to our right and saw what the problem was.    The black smoke we passed at the beginning of our day was still billowing up and we could still see huge flames. 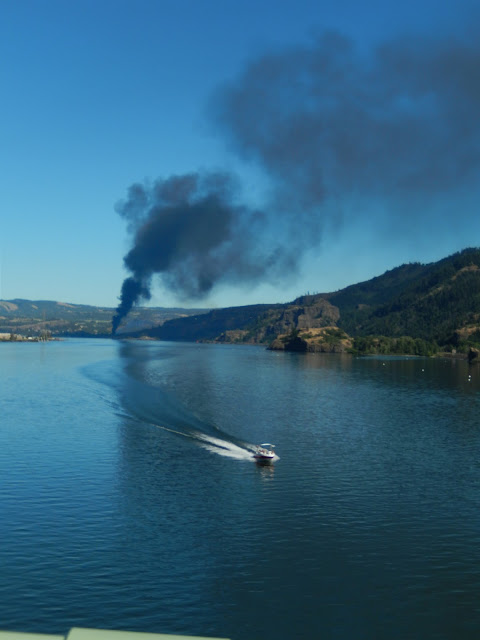 Since we were sitting in stopped traffic, and it looked like we would be for some time, I used my phone to access the local news.    What we saw that morning was an train derailment.   The train was carrying oil, 11 tanker cars derailed and 4 were burning.    I-84 was closed in both directions from The Dalles in the east and Hood River in the west.   Our campground, Beluga and the dogs were right in the middle of that closure - with the only way in being the closed interstate.

We were crawling along Washington rt. 14 on the north side of the Columbia Gorge toward The Dalles for at least 2 hours.   Once we crossed back over into Oregon we didn't know how we'd get back to Memaloose. 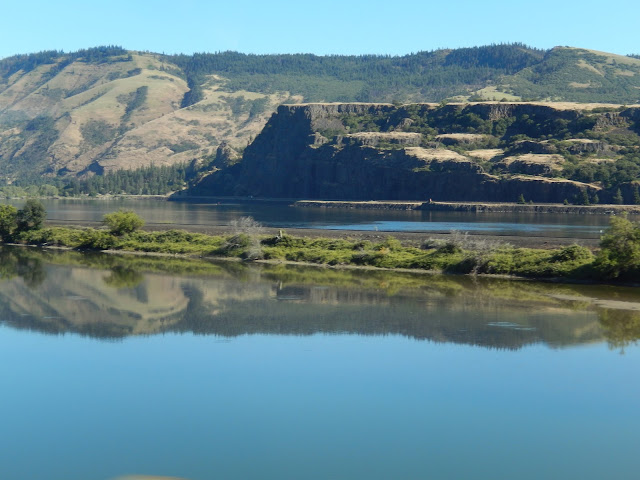 The scenery was still beautiful but we were worried.   I tried to keep my mind occupied by taking pictures out the jeep's window as we inched along. 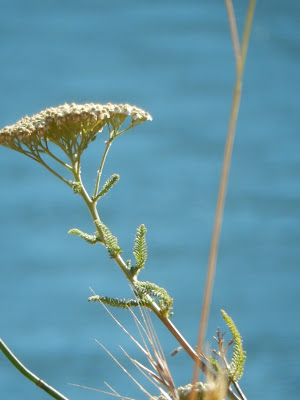 Once we got back to the Oregon side of the river we discovered that I-84, our only route home, was still closed.    We pulled over and I got out to talk to one of the workers manning the barrier.  I don't know if I sounded desperate, or hysterical, or just plain determined, but before we knew it we were whizzing along an empty interstate following an escort directly to our doorstep! 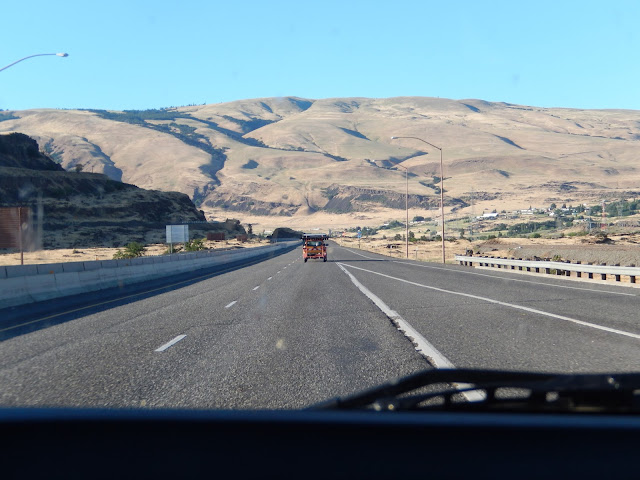 We finally arrived home about 7:30.     Without the near constant traffic on I-84 the campground was strangely quiet.       The dogs were fine, they are such very very good dogs.       It was good to be home.