Ran and sun, rain and sun

We're enjoying this campsite, there is no one in either site next to us and nothing but the golf course and gorgeous clouds and rainbows to our front. 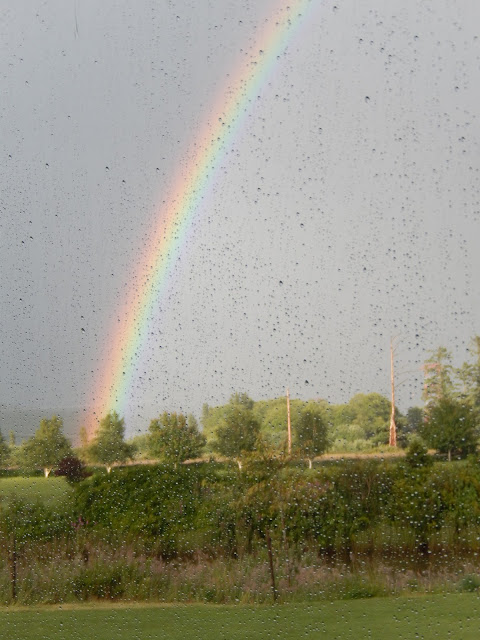 We do, however, have one small but quite noisy neighbor directly behind Beluga.


Sometimes she allows us to walk by her on our way to the dog walking area..... as long as she can see us at all times.


More often than not, however, she races out from under her bush, screaming and flopping and running away, feigning a terribly broken wing.    If we don't follow her, she darts back, throws herself down in front of us and begins the routine again.     We follow her, we can't bear to worry her more than she is genetically programmed to worry.    Lewis dutifully averts his eyes as he passes.

The weather here has been unusual.   It rains every day, quite hard at times, but for only a few minutes at a time.   Then the sun comes out and it is dazzling.    We think the storm has passed, go out to do something or go somewhere, and down comes another wave of rain.    Its hard to figure.

Yesterday we were a bit down, and the rain got to us so we just stayed in and napped the day away.    Enough of that.

Today we raced out during a sunbreak  (a northwest meteorological term) determined to get a bit of beach time.    We took Lewis and Clark Road through heavily logged hillsides directly to Seaside, Oregon.    We ran through rain and sun all the way. 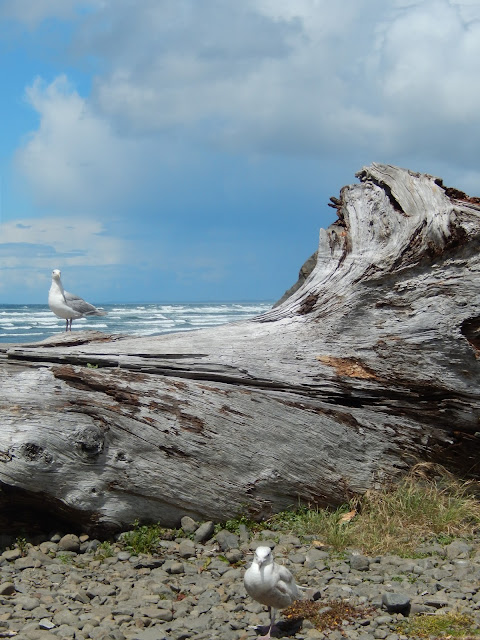 After driving around its charming but touristy downtown area we found a spot to ourselves and climbed over large driftwood logs and rocks to the wide low tide beach. 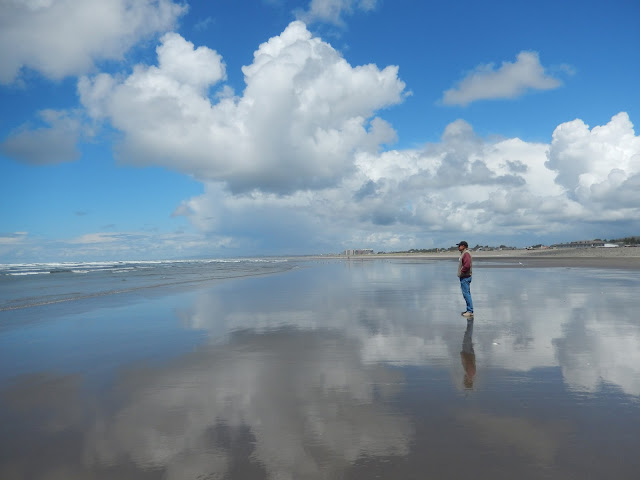 It was chilly but the beach was beautiful and we walked along the surf line looking for sand dollars.    We found a number of pieces that spurred us on, but never found a whole one.    We've always thought that sand dollars bring good luck to us and, whether that's true or not, they're fun to look for!

Back in the Jeep we continued south along the coast.   Cannon Beach was the one we were really looking for.   Rain.....rain, rain rain.


We sat beside the beach for awhile, waiting for the dark cloud to pass over us.   It did eventually and we ventured out on the wide beach, fighting strong winds as we walked. 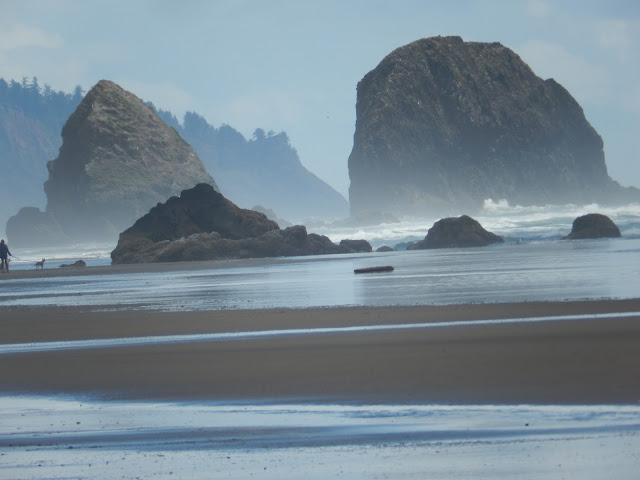 We wanted to explore the famous Haystack Rock at low tide but the wind and a very black cloud heading toward us nixed those plans.   We enjoyed the views and the fact that it wasn't raining.

The beach was littered with these very unusual looking, soft blue "things".    We couldn't figure out what they were and had to google "soft, squishy blue beach shells" when we got home to find out that they are called Velella Velella and wash up on beaches when the wind is strong, which it most certainly was.   They are in the jellyfish family. 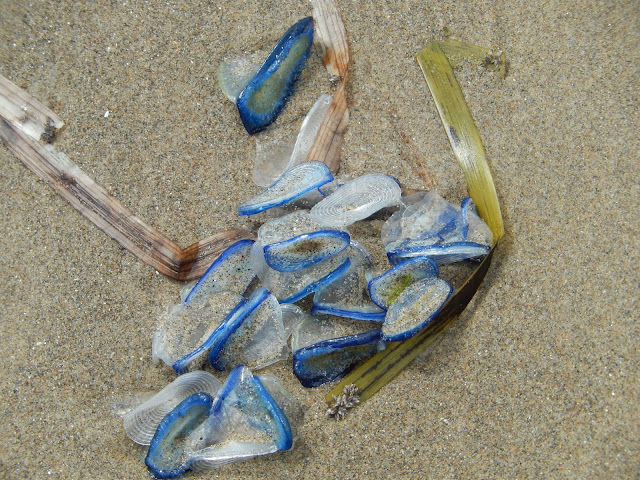 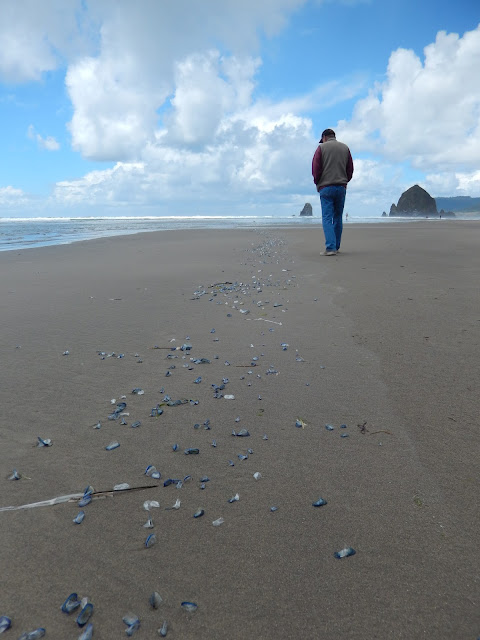 Rain was close and we had a few errands back in Astoria so we considered ourselves lucky to be able to get in at least two beach walks and headed back.

Last weekend Dave ordered some side rock rails for the Jeep and we needed to pick them up today.    He dropped me off at the fabulous Fred Meyer's to do a bit of shopping while went off to collect the Jeep parts.

The box was big.....real big.   It fit inside the Jeep, but just barely.    Luckily we didn't have far to drive like that.

When we got back to Beluga,  Dave asked me not to call the Northwest division of Mr. David's A-1 Motor Vehicle Modifiers for an appointment.    He wanted to try and do this job himself.    Besides he always had Lewis for help if he should run into a problem. 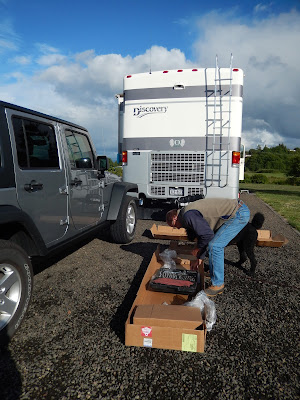 The rails went on in a matter of minutes with only minimal help from his curly haired helper. 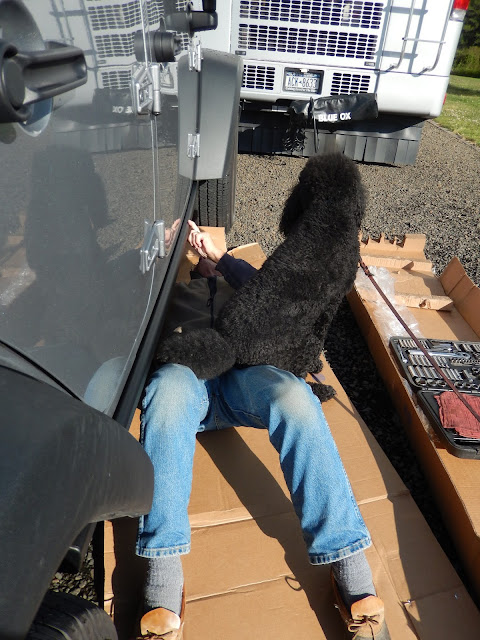