The heat wave continued Tuesday.   Tuesday was the last day we had to explore the Columbia Gorge so we went out for breakfast/lunch and decided what to do over polish sausage hash and banana waffles.   No, not together, I had the waffle. 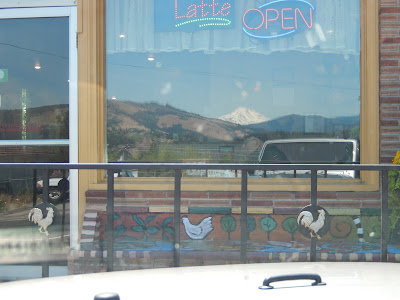 Mt. Adams peeked in the window at the Egg Ranch Restaurant in Hood River.

Finding a few of the 77 waterfalls that tumbled down along historic route 30 got both our votes.     Most of these falls occur along a 15 mile stretch of the road.

We began our tour at Horsetail Falls.   It can be seen from a turnout a few miles from the start of our trip. 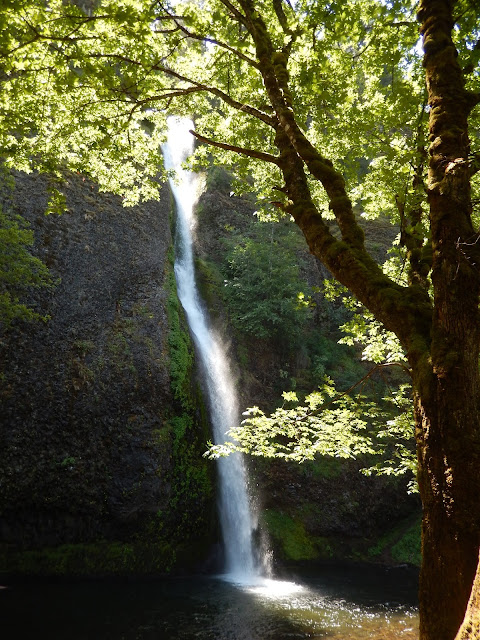 It falls from a height of over 176 feet into a beautiful sunlit pool.   There is a short, steep trail that leads to the Upper Horsetail Falls, or Pony Tail falls where you can walk behind the falls but there were too many people heading that way and we were anxious to continue our jaunt. 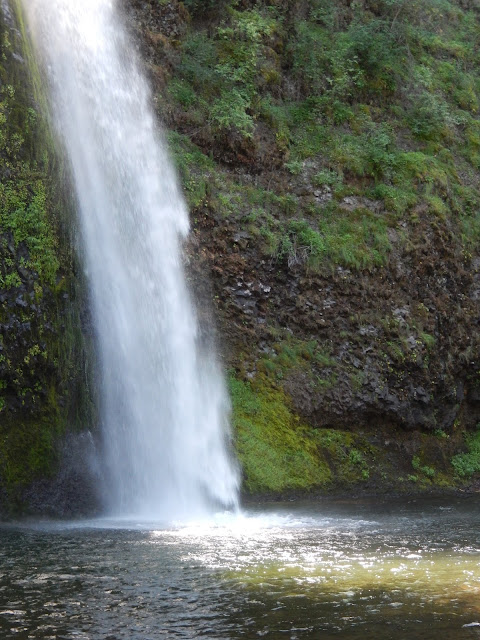 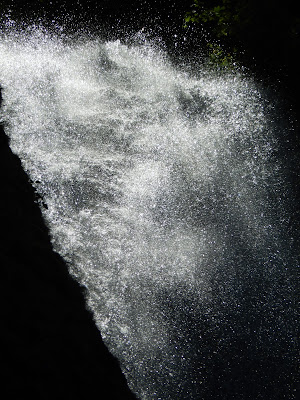 Rt. 30 is called the Columbia Gorge Scenic Byway and has been allowing travelers glimpses of the majestic Columbia River Gorge's diverse beauty for 100 years. 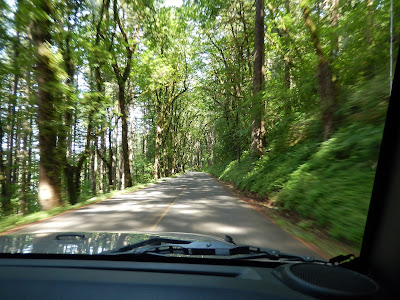 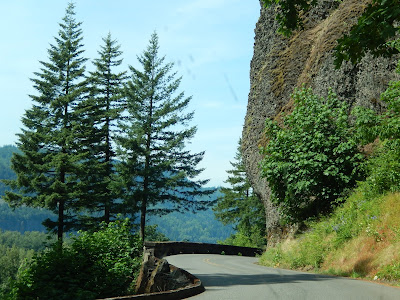 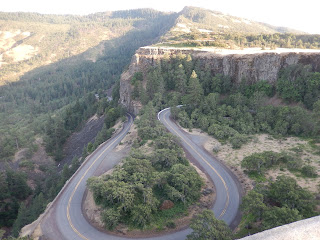 It is winding and narrow but runs through some of the most beautiful scenery and its graceful overpasses, bridges, and stone guard rails take you back to another day when fine workmanship was the norm. 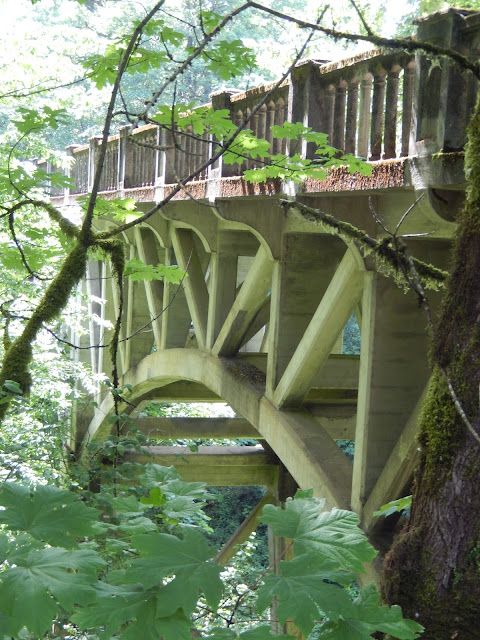 Our next stop was Multnomah Falls, one of the most visited natural attractions in Oregon.   A fact that usually doesn't attract us, but it IS a beautiful waterfall and Pam says that sometimes we have to go out among the others so Multnomah Falls it was.

The parking lot was full but we managed to snag a spot and walked a short distance to the falls. 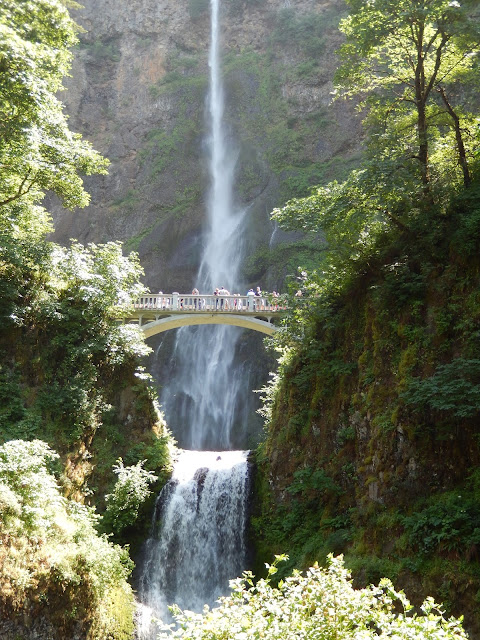 It was beautiful even with people swarming everywhere.   We just tuned them out and concentrated on the thundering water. 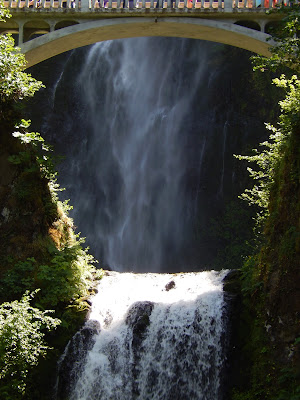 A short hike lead to the arched bridge above the lower section of the falls.   We went up, but the span was too high for me and I didn't walk out on to it.   Besides, it was full of others. 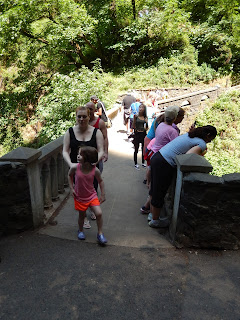 Wakeena Falls was more difficult to see and I found that I didn't take any pictures of it in its entirety.    The real treat, for me, was the series of small falls along the creek running from the main falls above. 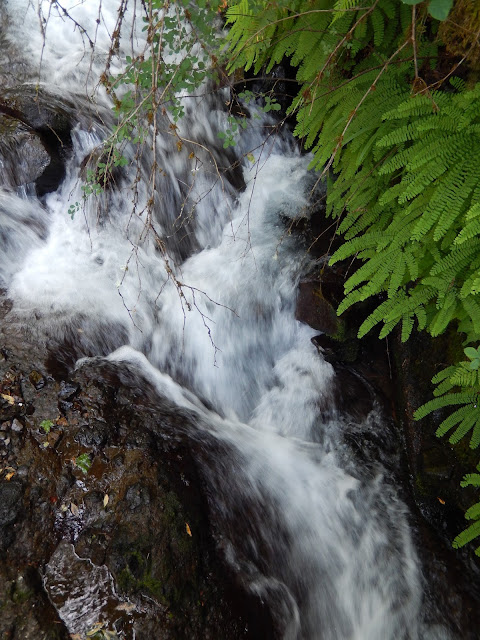 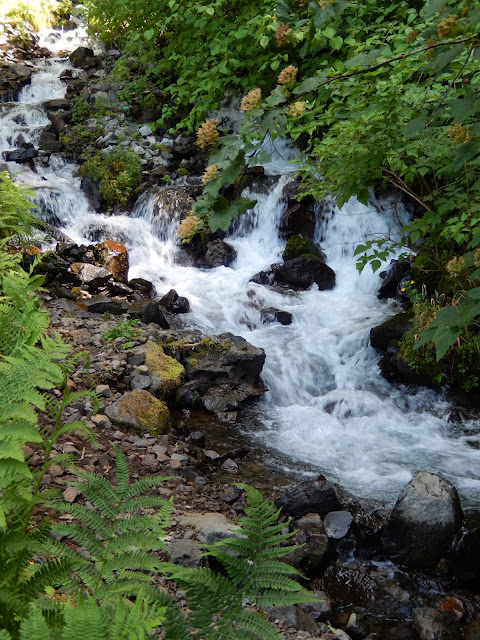 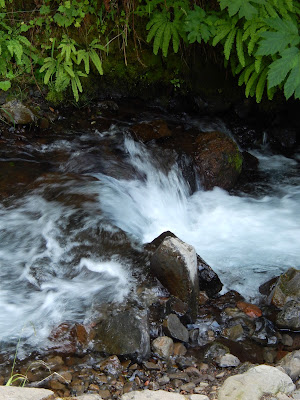 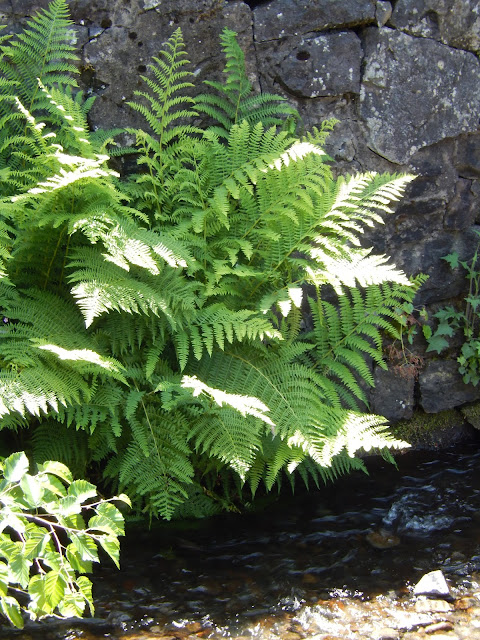 My very favorite waterfall was the last one we visited.  From the turn out, Latourell Falls didn't look as special as it turned out to be. 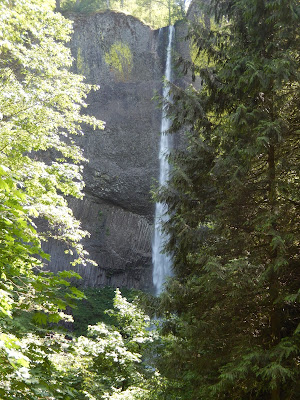 Dave hiked ahead of me on the dirt trail.   We walked along the stone filled creek below the falls. 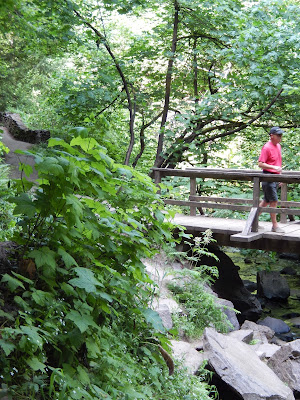 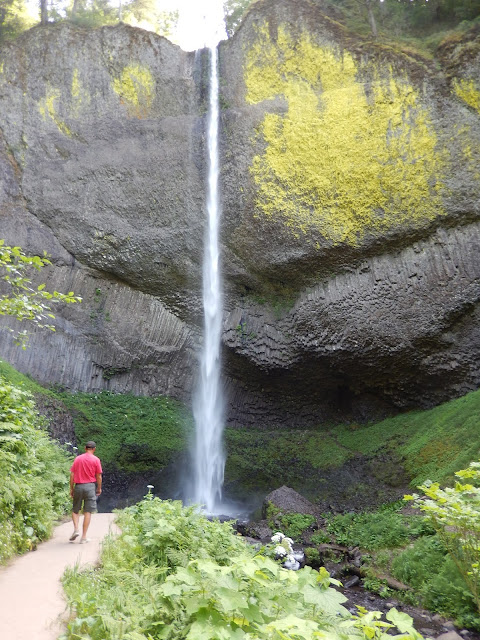 The narrow path opened up into a clearing with the most magnificent thundering free falling water fall I've ever seen.   It wasn't the highest, or the widest, but the scene just grabbed me, both of us really.    We were the only ones there and the sound of the water falling directly down into the pool was tremendous. 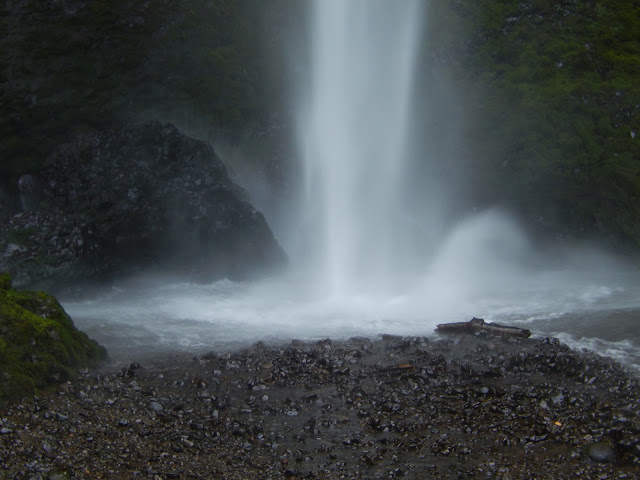 We stood, silently, just looking.   After a few minutes we started to take in all the details.    The yellow patch of lichen growing on the black columnar basalt wall was shockingly bright. 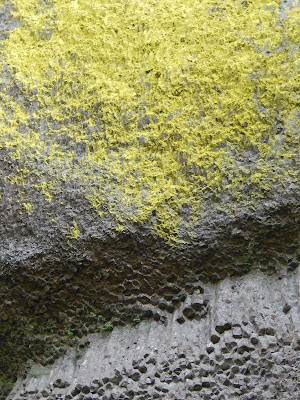 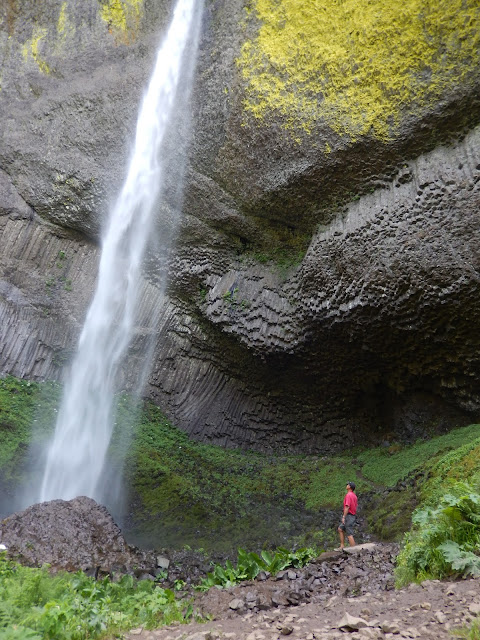 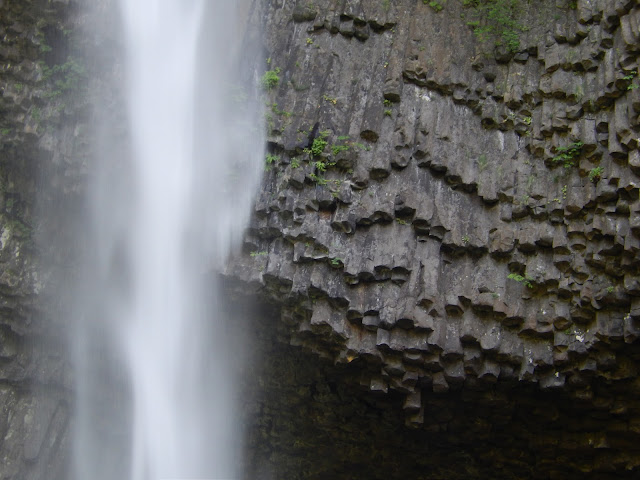 The perfectly shaped columns of basalt and the tiny wild flowers taking advantage of the moist warm air. 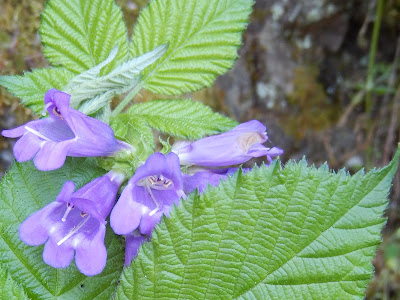 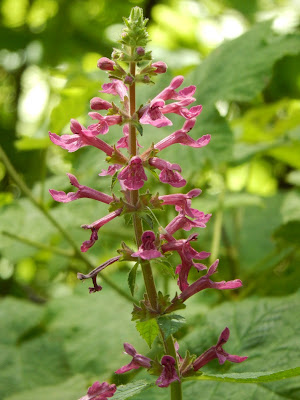 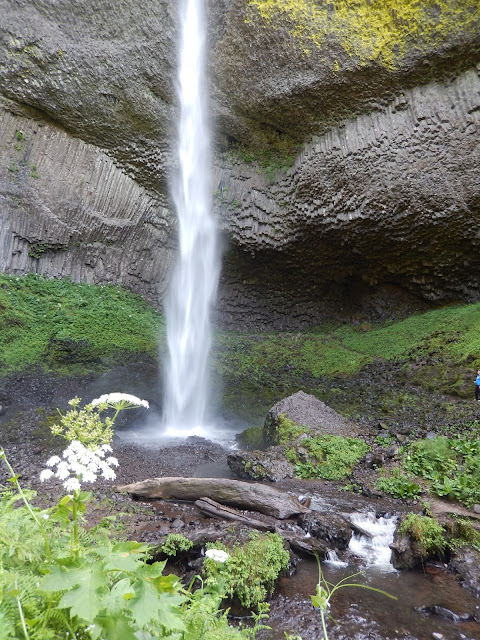 We hiked back to the Jeep and continued along rt. 30, heading slowly for home.


A few viewpoint stops along the way gave us more unbelievable views of the river and gorge.


The round building on the cliff above intrigued us and we made sure to stop to investigate on our way past. 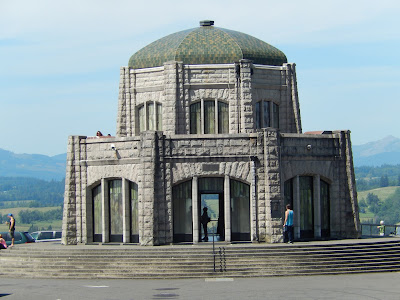 Vista House sits atop Crown Point, over 750 feet above the Columbia River.  It was built in 1918 as a rest stop observatory for travelers on rt. 30.   Vista House was listed on the National Register of Historic Places in 1974. 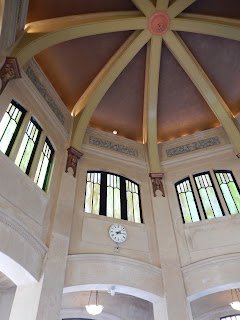 The last section of the Historic Highway led us 1000 feet above the river, above our campground's namesake, Memaloose Island.


The island is one of several once found in this section of the river that were used as burial grounds by local native Americans.


That finished our last day of exploration in the Columbia River Gorge.   Never enough time, there is never enough time to see all we want to see.   I feel we got a taste of all that the area has to offer and one that insures we will return.

Yesterday we spent cleaning and doing laundry.  Bills and planning and organizing for our next move to the coast.   We treated ourselves to a delicious pizza and beer dinner at the Double Mountain Brewery in Hood River.    On our way we detoured a few miles to see how  clean up of that horrendous train derailment and fire was coming along.   The road had just opened so we could stand on the overpass and look down at the site. 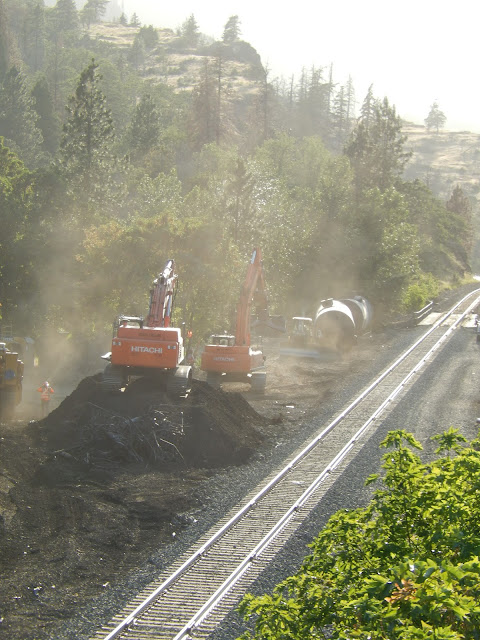 Most of the damaged oil rail cars have been removed, but not all,  They seem to be working on removing the contaminated soil but the trains are still running through the scene.   It doesn't seem safe to me.