Before I forget, I want to show you a picture of our friend, Dianna,  and her Standard Poodle guide dog, Gibson.   She and her husband live in Canada with Gibson and their three English Cocker Spaniels.   I told you about Gibson the other day, he's the guide dog that has some "distraction" problems.....isn't he a doll?


Its looking a lot like Christmas here lately.   Lights and greenery and inflatable Santas everywhere you look. 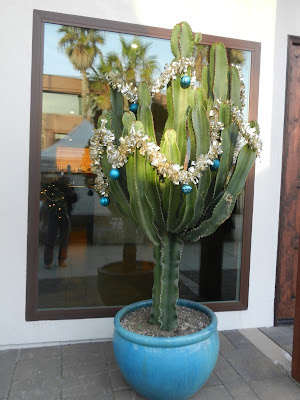 Tuesday we went to the Pacific Beach Farmer's market and found some delicious produce and a small bakery vendor.    They had our most favorite holiday treat!  Kouign Amann!     We hardly ever find them so when we do we get fairly giggly...and drooly.   I may have pushed in line a bit to get them, I don't remember anything except walking away with a paper sack in my hand.


And chocolate covered Marzipan!   I can't show you what it looked like, it has disappeared.     As I said, its getting to look a lot like Christmas.   UPS dropped off a special delivery package the other day.    JUDI SENT COOKIES!


We're not doing much hiking here, just long walks along the bay and the beach, and around Costco.

What we are doing is eating lots of goodies.    We even found a store selling Julian Pies!   Yes, we brought one home.   burp.


Yesterday we drove over the beautiful Coronado Bridge, through the cute village of Coronado, past the famous Del Coronado Hotel and south along the Silver Strand toward Imperial Beach.

We drove until the road ended at the Tijuana Slough Wetland Preserve where we parked and did a bit of bird watching. 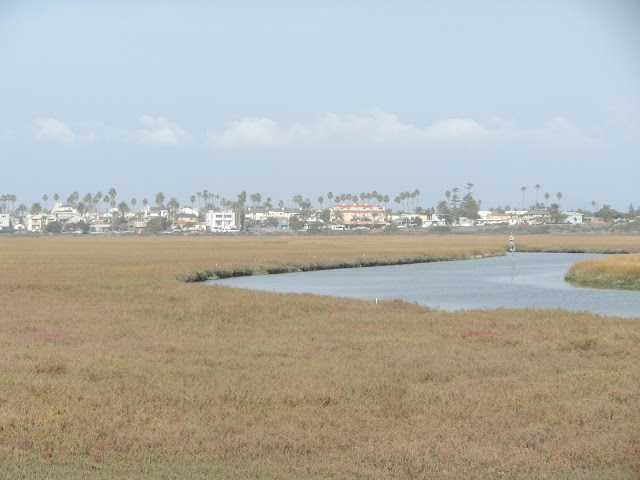 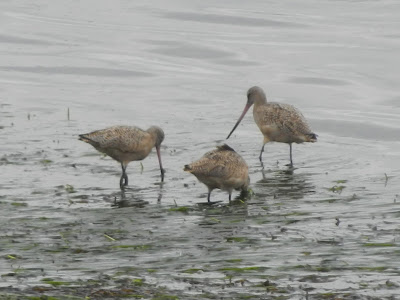 We hiked over a sand dune to walk along the ocean but were met with a sign warning of dangerous and polluted water south toward Mexico.     We decided to continue on our way back through Imperial Beach in search of a great birding place, Dairy Maid pond. 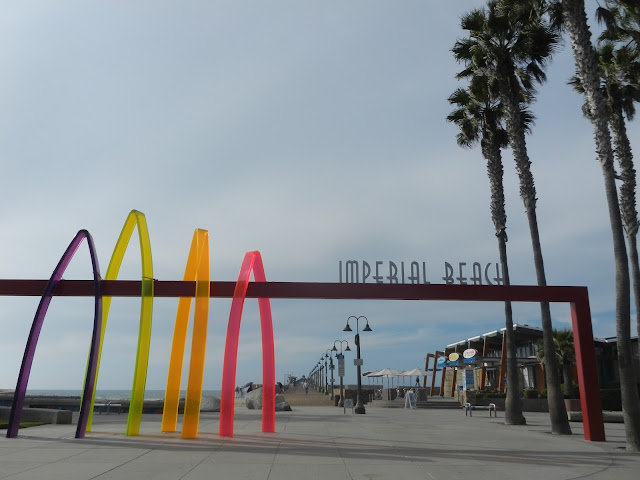 We walked through a welcome arch, under a colorful art installation that looked like a line of surfboards waiting for their turn,  and out onto the long fishing pier. 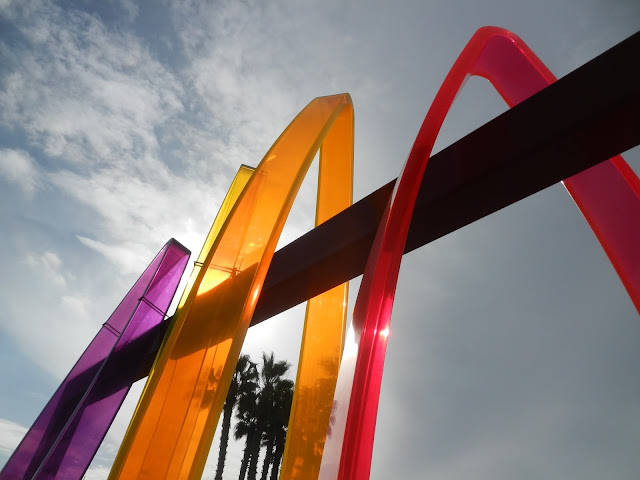 I marveled at the way the sun shown through the acrylic material, the way their color changed with the sky. 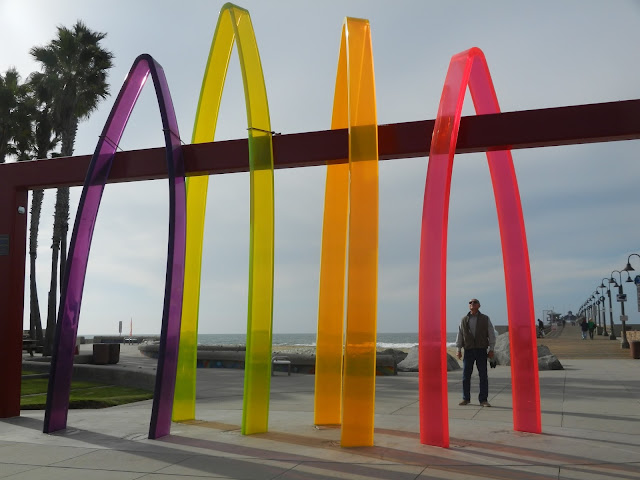 Dave, Mr. Plastics, analyzed the material and how they were made.....


The wind was blowing and it was a little chilly.    I only went halfway out on the pier because the space between the decking boards was freaking me out!   Seeing the waves crashing and surging far below my feet with each step made me dizzy.  Such a wimp.

We drove south from Imperial Beach, down Monument Road and over the Tijuana River, little more than a sluggish, trash filled stream at that point.   It was obviously the source of pollution that caused the nearby beach to fly the "danger" flag. 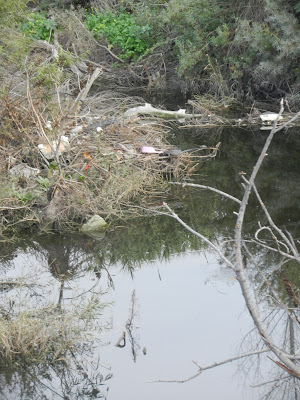 The area was bleak, there were a few horse properties but they looked like ones we had seen in Mexico.   Fences holding the animals were made of whatever was available.   Metal roofing, bed springs, cut scrub trees, etc.  We saw signs telling us that we were driving through the Tijuana River Valley Regional Park and some sand parking lots with multi use paths trailing off into the scrub, but not much else.    The whole place appears to be in the process of restoration, we saw some newly planted pine trees and a few shrubs here and there but mostly the invasive salt cedars and prolific castor beans along the water. 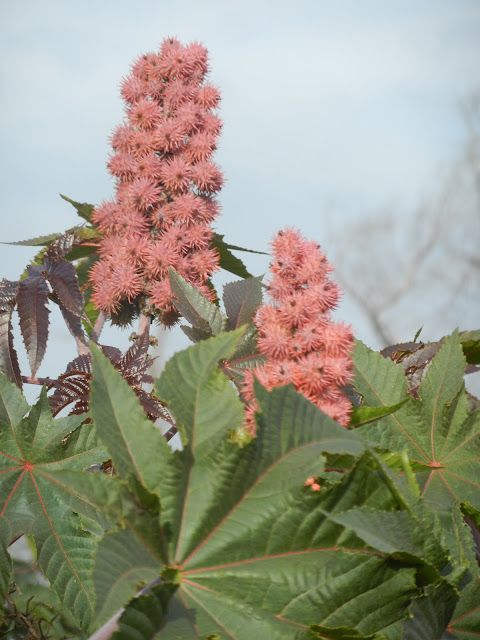 We continued on Monument Road to its end and discovered Border Field State Park, on the United States most southwestern border.     Again, it wasn't a place we wanted to spend any time.   Its entrance was a muddy, rutted parking lot beside a water treatment plant with random odd decorations on its chain link fence. 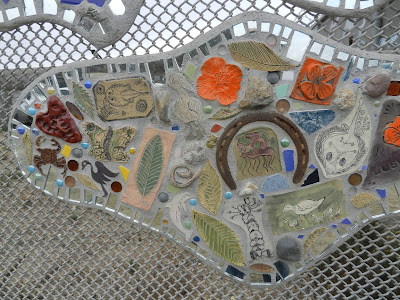 There was a map board giving us us the hiking routes (one for the Wet season and one for the Dry season) to the top of Monument Mesa for views of Tijuana and San Diego and access to the ocean beach (the polluted ocean beach) and picnic area.     The actual survey Monument is behind border fencing and, therefore, not accessible.

Once again, we turned around and followed Monument Road back towards Dairy Mart Rd. and the elusive pond.    We were amazed at how many flack jacketed border patrol people we saw roaring along the back roads on tricked out ATVs.
We pulled over more than once to let them by, they didn't appear to have a sense of humor and seemed to be in an awful hurry.

To make an already long story a bit shorter, we came upon the pond we had been looking for and parked in the lot. 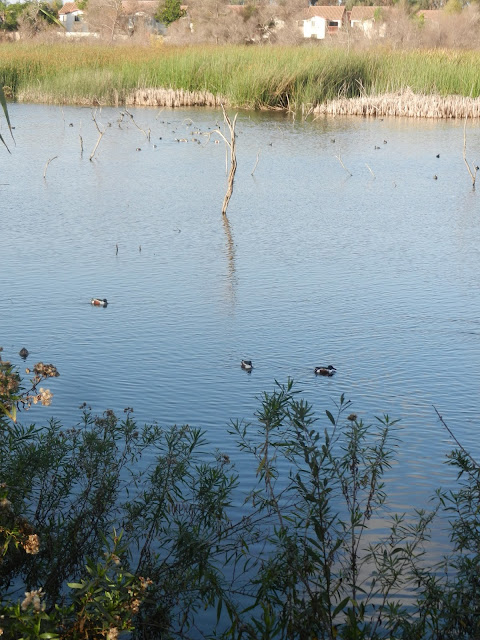 A short path took us to a bench behind a bird blind. 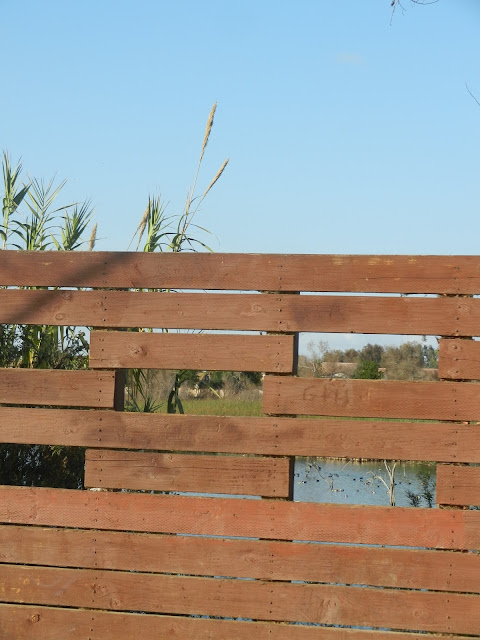 Dairy Mart Pond isn't a very big body of water but it was teeming with waterfowl.    We stayed at the blind for quite awhile before continuing along the path for another perspective. 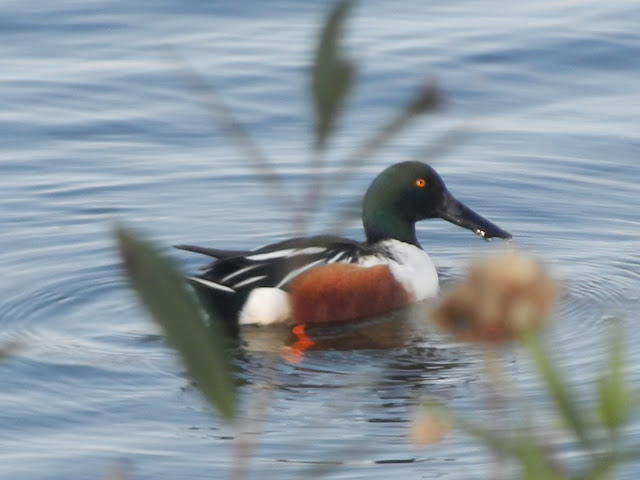 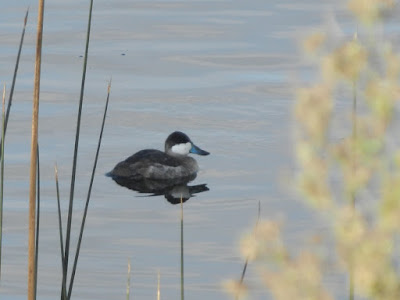 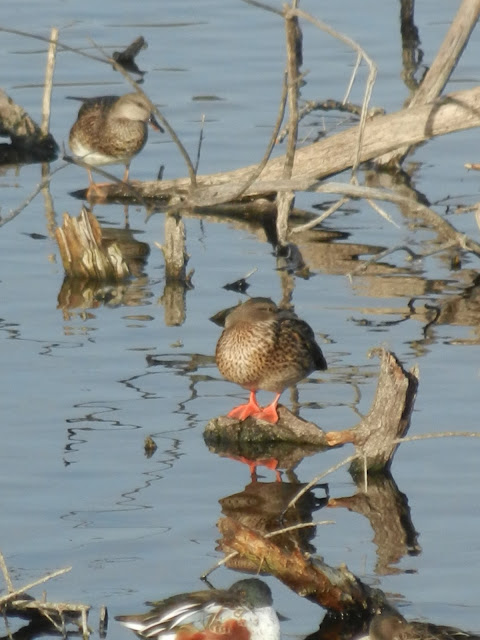 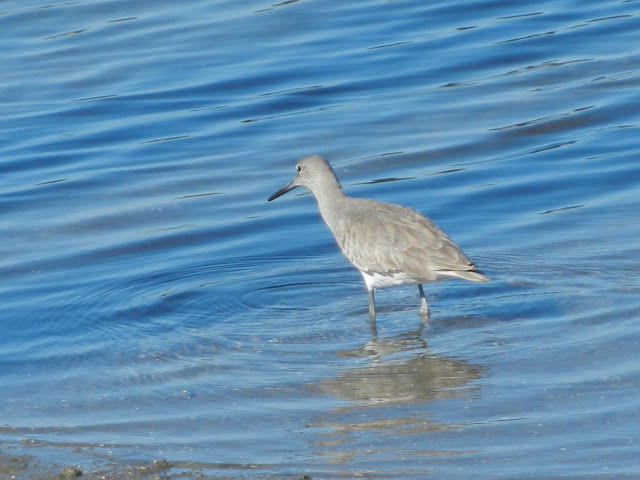 Beluga welcomed us home with another wonderful sunset over the bay. 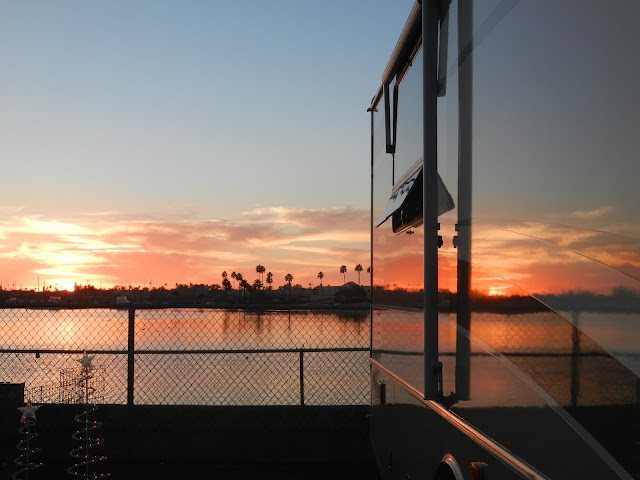