Yesterday we took a drive north along the coast.     We haven't been to the Children's Pool in LaJolla yet and I wanted to see if there were still seals/sea lions lounging about on the sand in the sheltered cove. 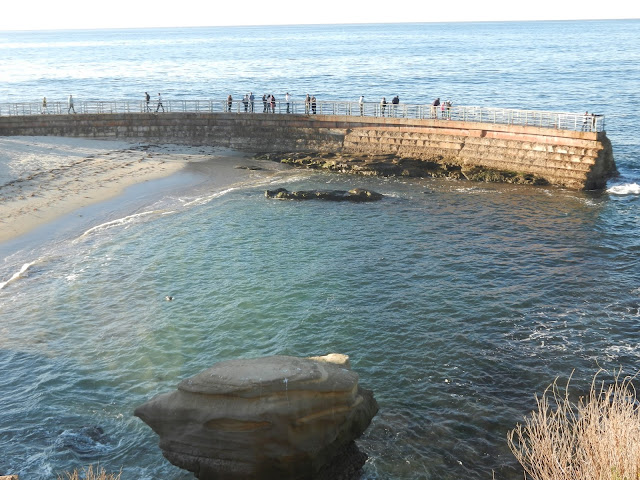 Not a one!   We walked along the shore line to the end of the small park to see if there were any seals in the area. 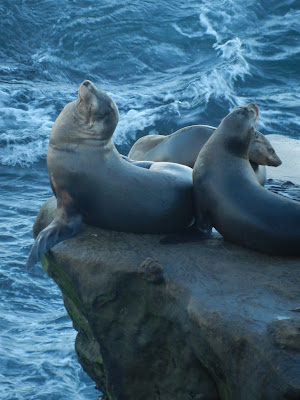 Yep!  Lots of them swimming in the strong surf and lounging about on the uncomfortable looking rocks. 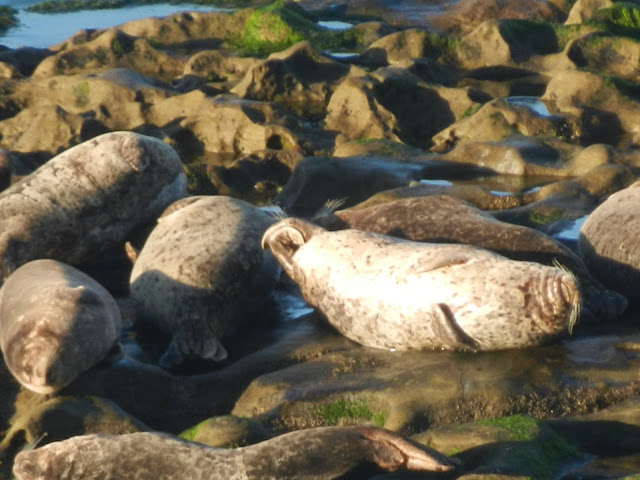 One particular rock seemed to be the best one, and potential new arrivals caused quite a bit of gnashing of teeth, vocalizing, and even a bit of neck wrestling by the resident group. 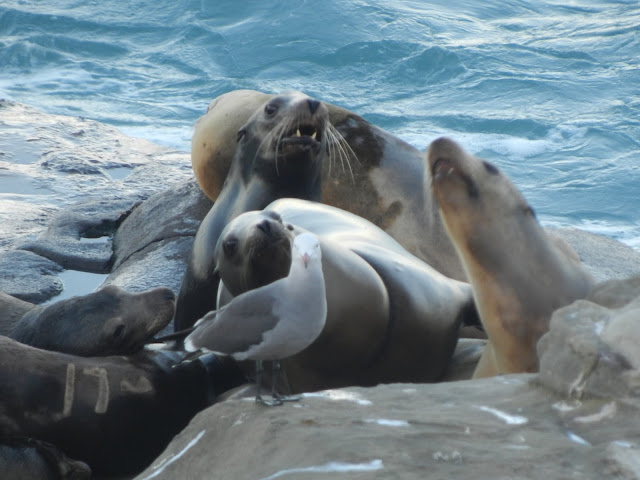 As in any population, there are always a few anti social individuals and they sought out more private areas to dry off and enjoy the warm sun. 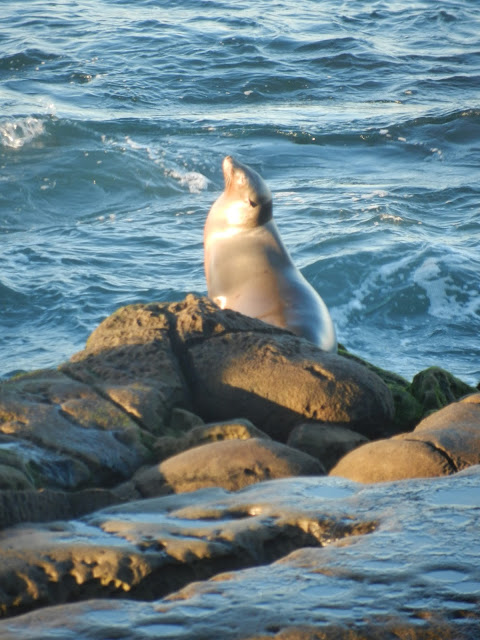 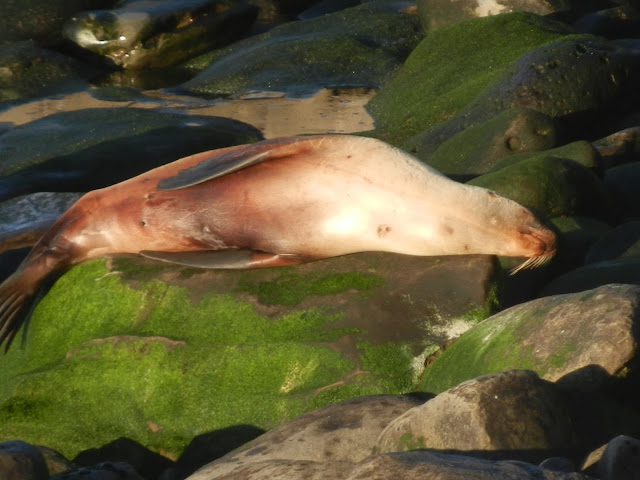 We even saw one glamorous blond enjoying her rest away from the maddening crowd. 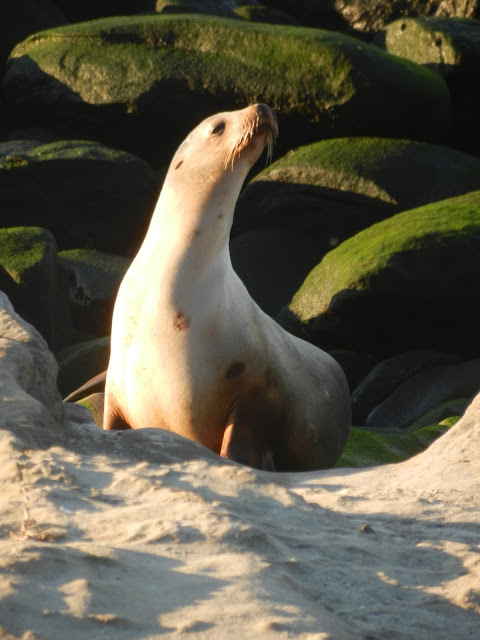 Speaking of the maddening crowd.....we watched, with dismay, people trying to get a d amn selfie with a resting sea lion.   It certainly had more patience that I would have..... 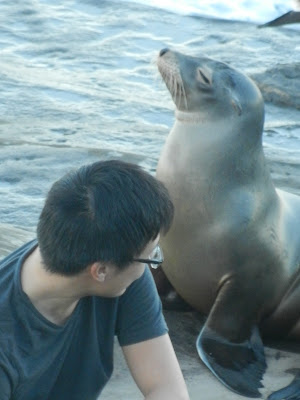 Continuing back through the park we saw others creatures resting or grooming and perhaps even learning their trade along the rocky coast. 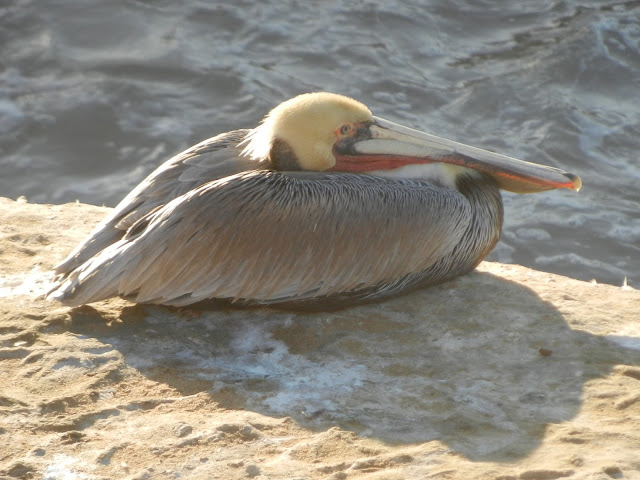 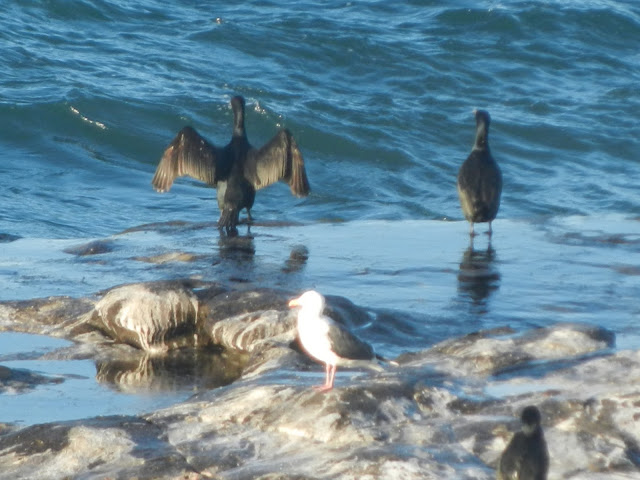 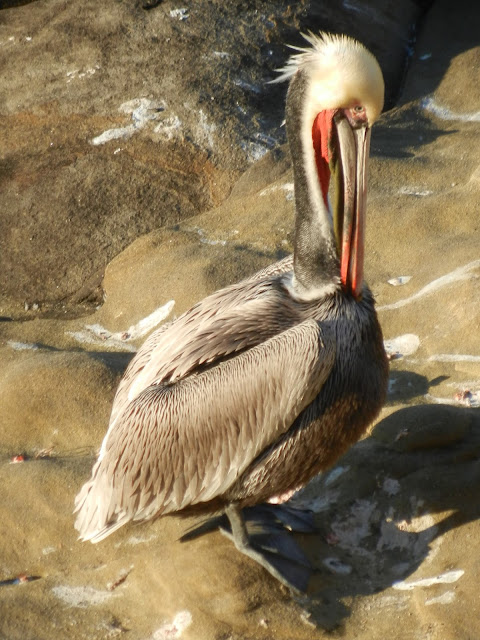 One obviously young gull was begging from passersby while it's mother (father?) waited patiently nearby.   The youngster wasn't "asking" the parent for food, it was clearly imploring us humans for a tasty french fry or orange peel.    Perhaps its mother decided the kid was just too big and needed to learn how real sea gulls act! 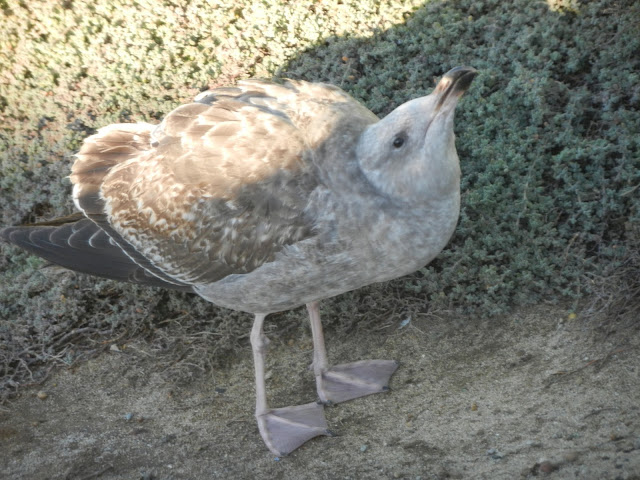 We stopped at the Torrey Pines Gliderport, beside the Salk Institute, to watch the daredevil hang gliders run to the end of the cliff and soar off, hundreds of feet over the crashing ocean below. 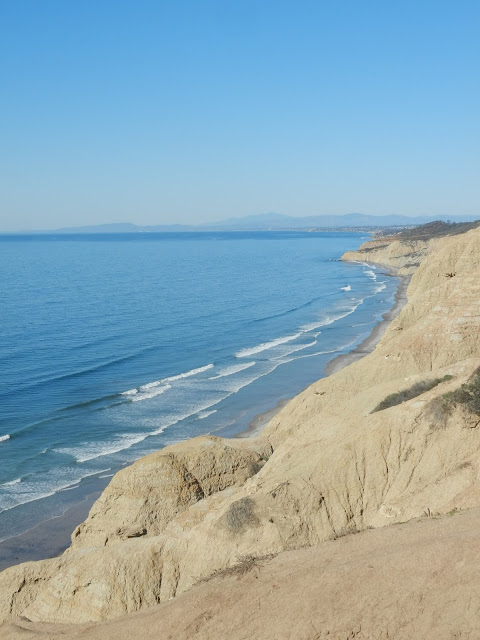 Evidently the Gliderport was closed for a special group that day, but we watched an instructor giving lessons. 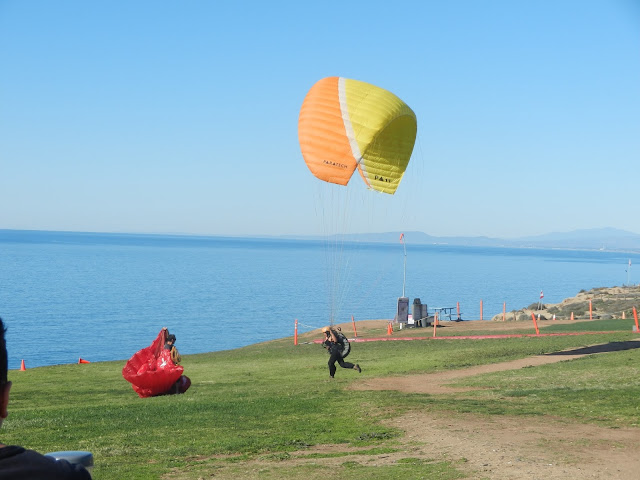 The students would run, full speed, toward the drop off and stop just short of going over.    At least the ones we watched stopped short.....

Further along the drive we pulled into one of the narrow, ocean side State Parks with a campground attached.   It looked like a great location, but after driving through we decided it definitely wasn't our cup of tea.   We loved the camp host's Christmas decoration, however. 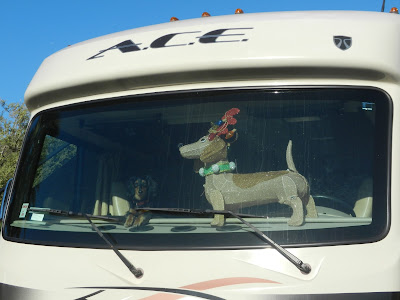 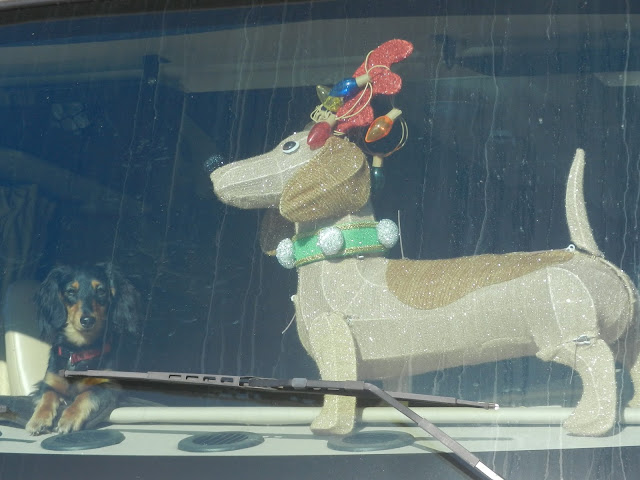 We stopped at various spots, at various views along the way before heading back home. 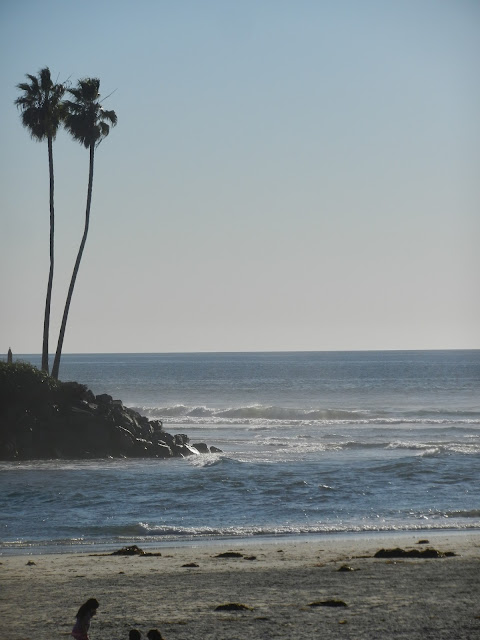 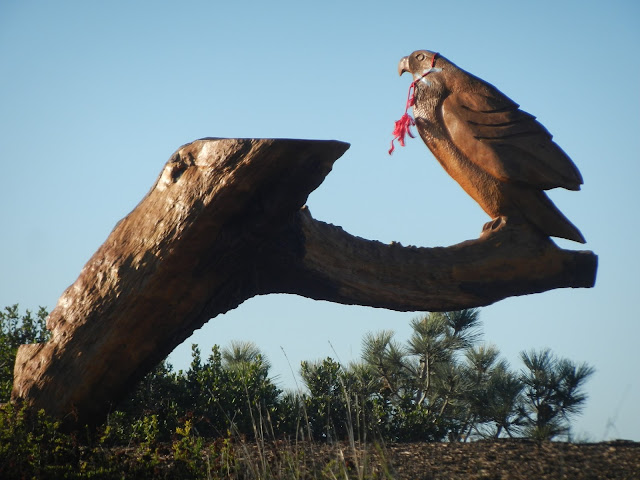 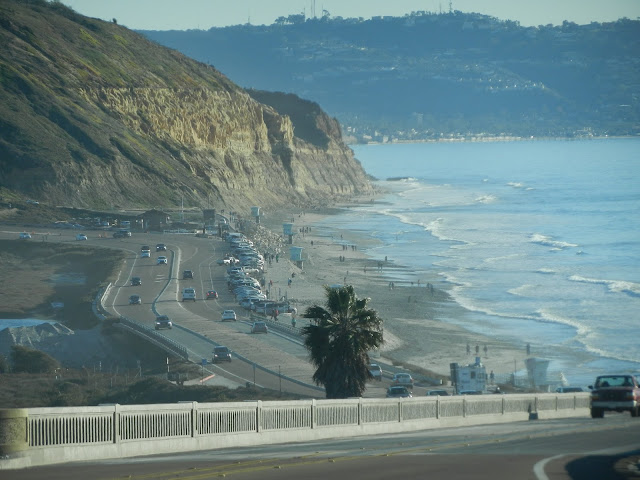 Today is our last day, we break camp in the morning and move away from the ocean and into the desert.    Sad to leave, excited to go.

We enjoyed second cup outside watching our ever present visitors.    Today a congregation of Cormorants joined us. 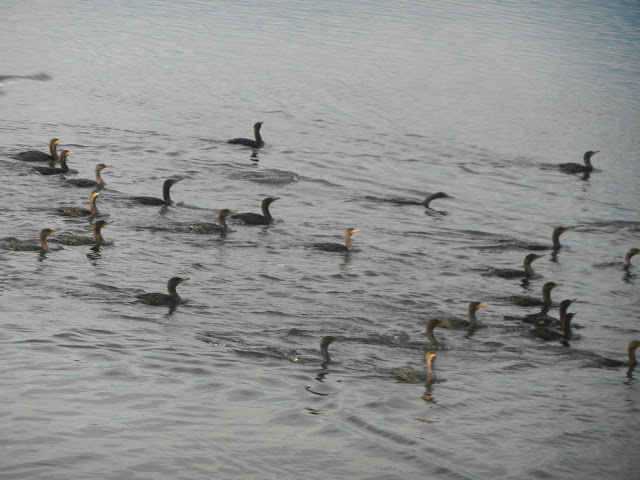 We took a last walk along the Bay.   An Osprey dove into the water, wings pulled back, and came out with a large, wiggling fish.   He flew off into the trees to enjoy his meal. 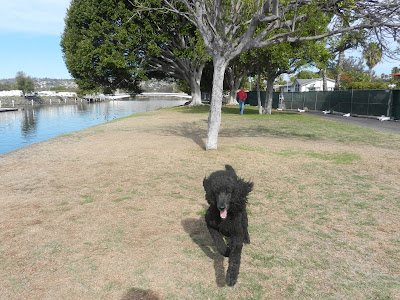 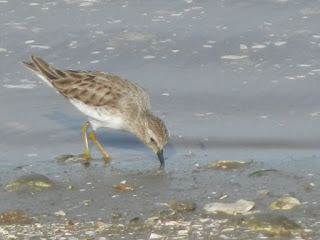 Tonight's sunset was another beauty, as they most always are, and faded fast into a cloudy, warm night. 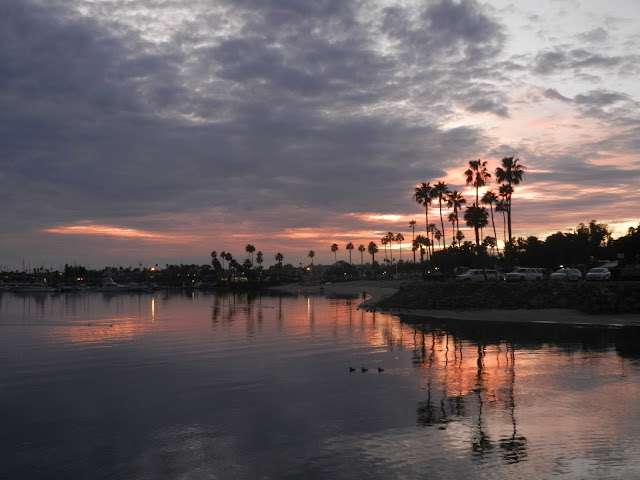 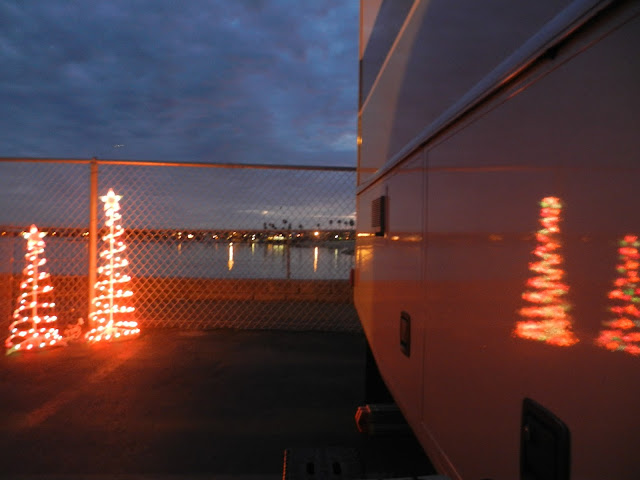