Wednesday morning I booked a Palm Springs Architecture tour for the four of us.    The tour was already fully booked (Michael's car only holds 6 people) so we caravaned along behind him in our jeep.     He had a bit of a lead foot but Jesse did an yeoman's job following him through the residential streets.    There was phone communication between our two vehicles so we heard everything he said and he could hear our questions and comments.

The tour lasted about 2 1/2 hours during which we saw the outside of many notable homes and examples of different styles of Mid-Century homes.   Michael talked about the architects, hallmarks of the designs and we came to understand the thought process involved in the elements of each particular design.    Some were homes of famous people, some were not.

We were lucky enough to be able to tour the inside of three beautiful homes and talk with their owners. 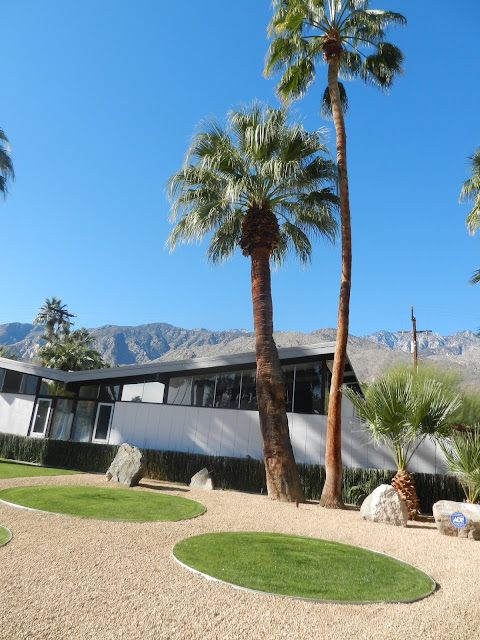 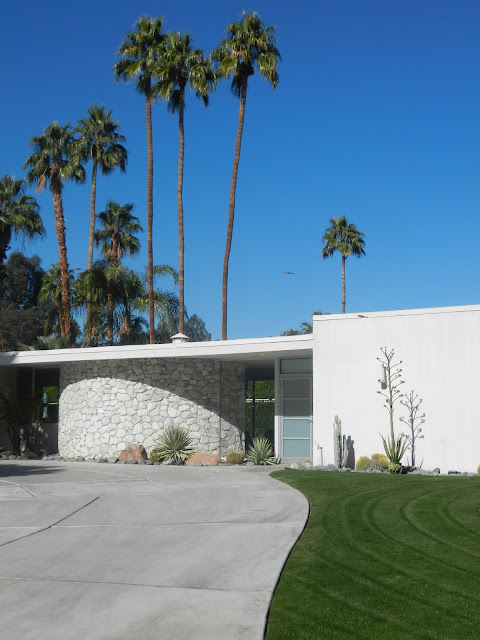 It was hard for me to photograph the homes we passed....we had to stay with Michael! 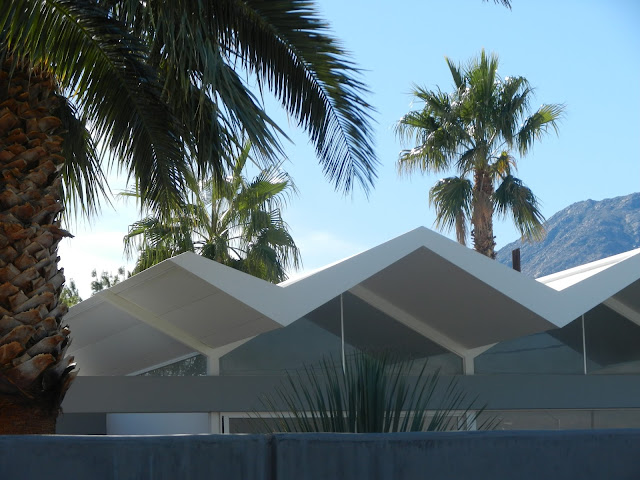 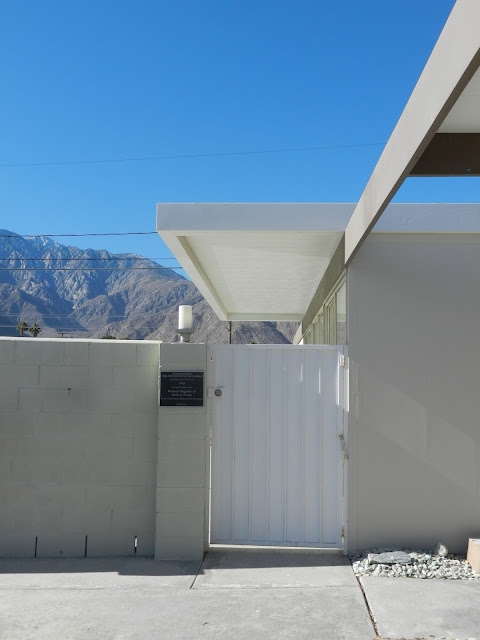 The blue skies and palm trees make it difficult to remember that we're here during a holiday week.      We enjoy seeing reminders though.... 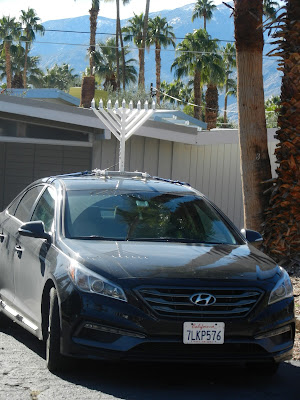 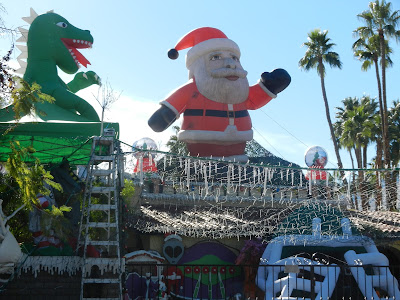 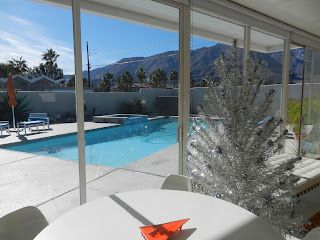 Michael led us to the top of a small rise where a visitor center marked a popular trail head, and we could clearly see how Palm Springs got its name.    Palm trees as far as we could see lined the bottom of what was once a huge lake.   The resulting underground aquifer provides the area with plenty of water. 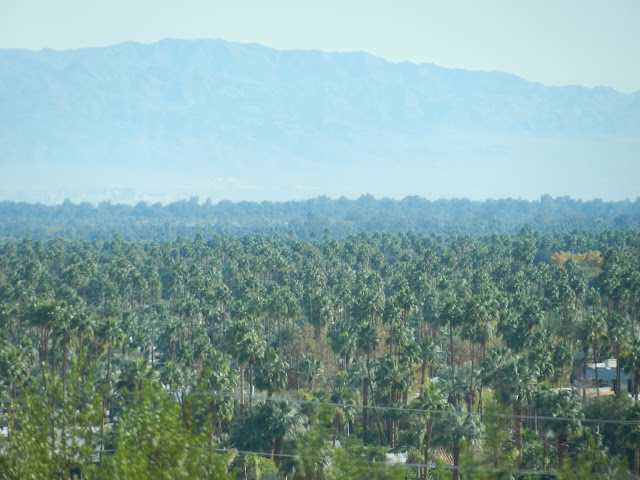 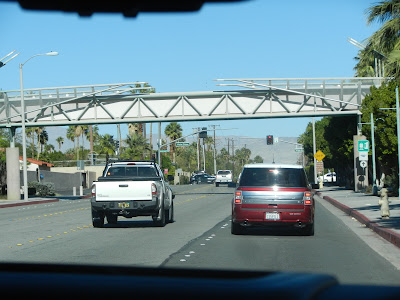 This overpass allows private movement for the guests of a Nudist hotel that occupies both sides of the street.....That's Michael's red Ford Flex ahead of us. 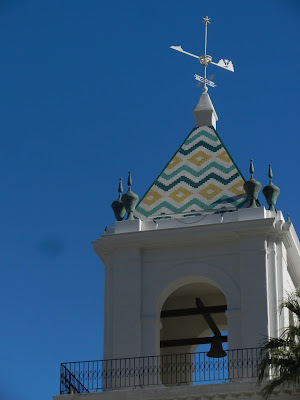 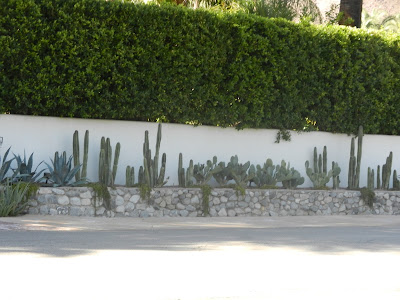 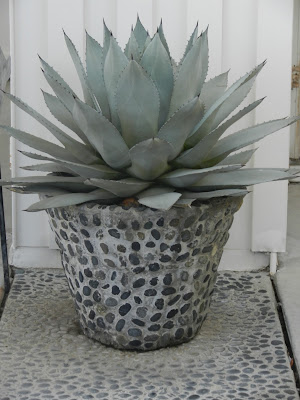 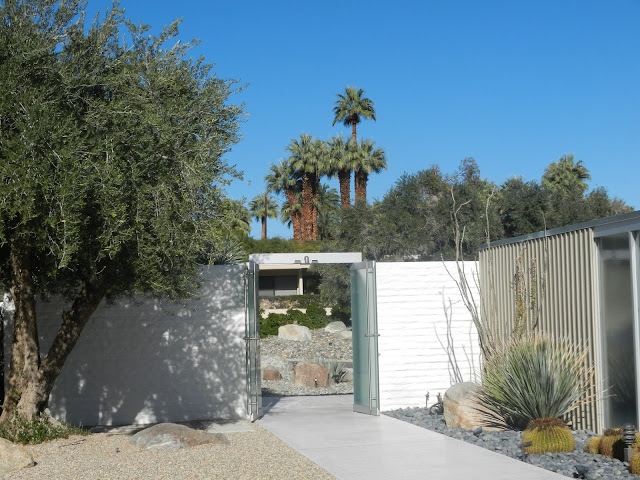 Sometimes what appears to be a home's front door actually opens into a lovely courtyard instead of a living room.    Or, opening the door reveals another outside view before taking you into the house itself. 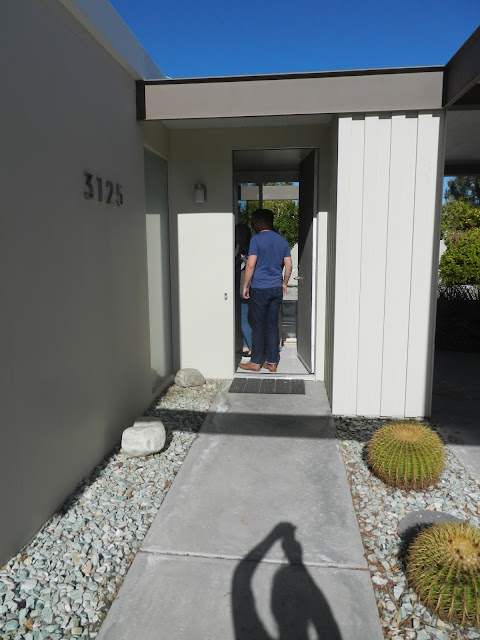 The lines between inside and outside blur in these homes.  Even the lines between walls and rooms merge.   The view is everything and everything is carefully designed for your viewing pleasure.   Right down to the size, color and positioning of stone and rock. 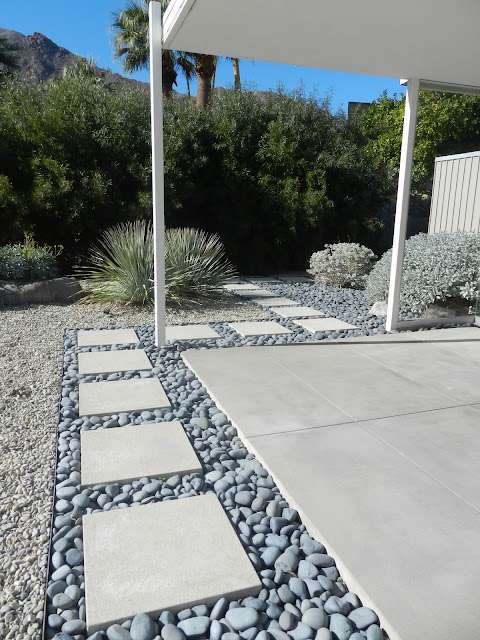 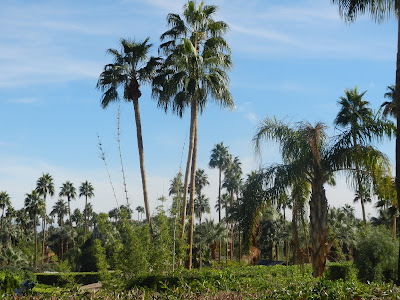 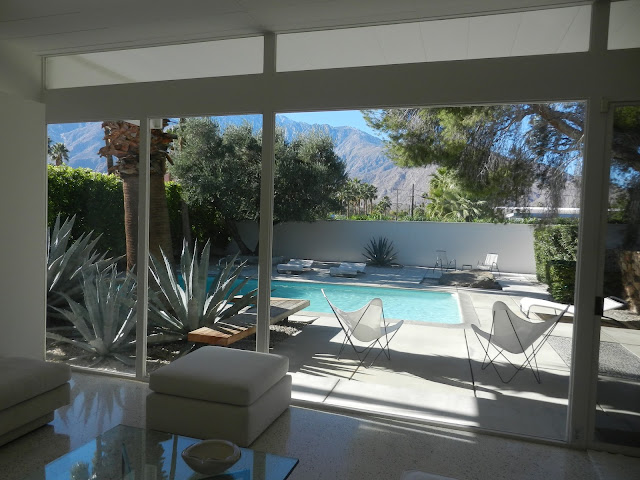 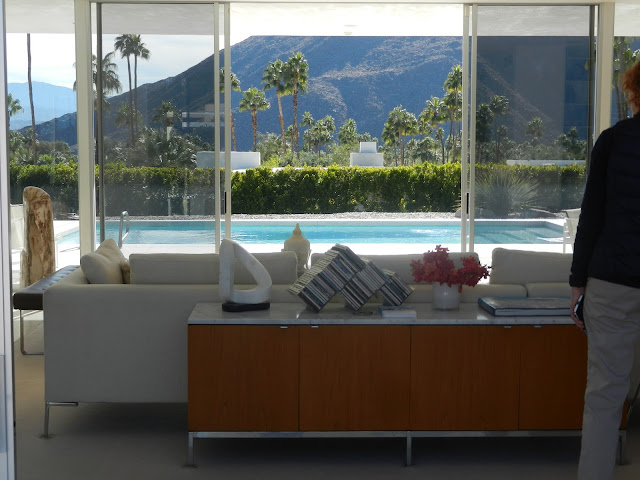 Fantastic, but occasionally disconcerting as I almost walked into glass when I expected to be stepping outside,    I'm sure I could get used to it if someone was to give me one of these beauties..... 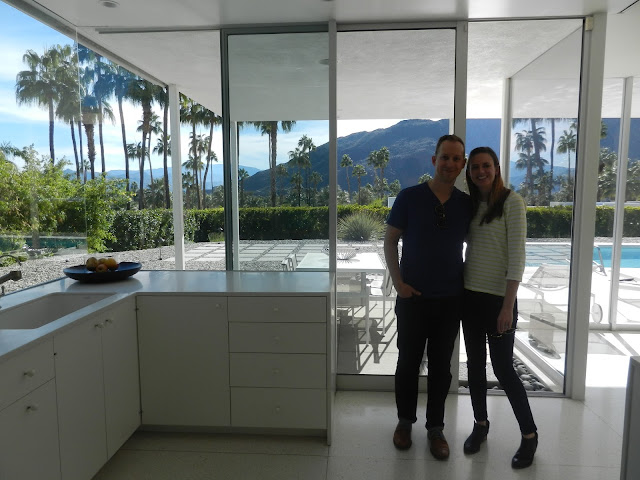 Most were not really large homes, but the floor to ceiling windows turned inward to private courtyards and distant mountains, light colored and reflective surfaces, simple lines and minimal clutter made them seem very spacious. 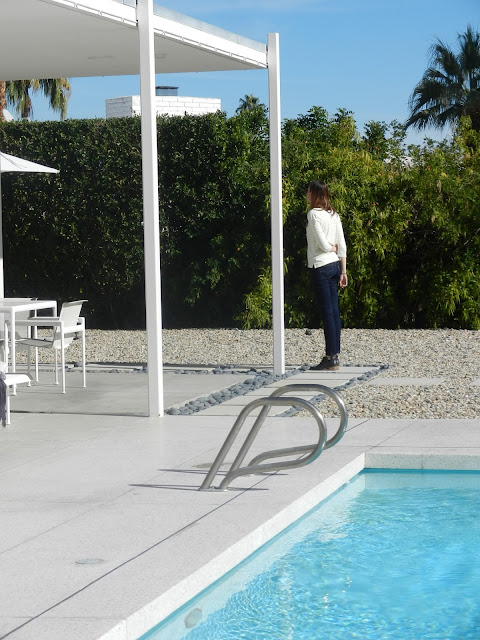 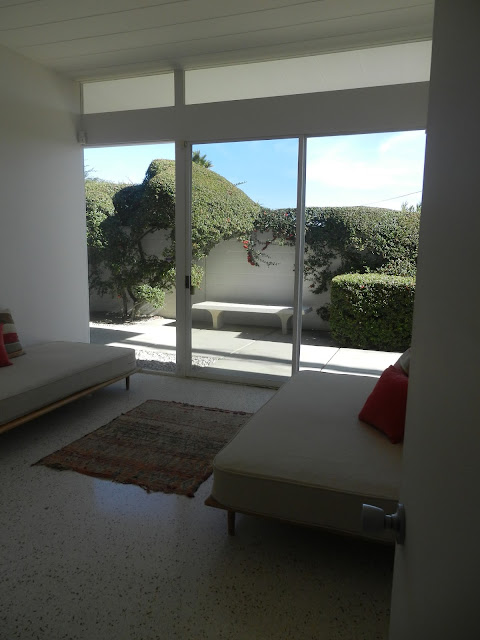 Even our last home's garage was special, bringing the outside in and melding one space with another. 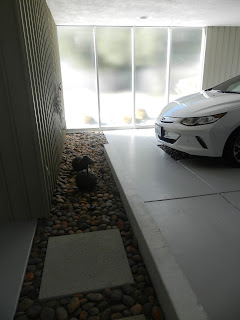 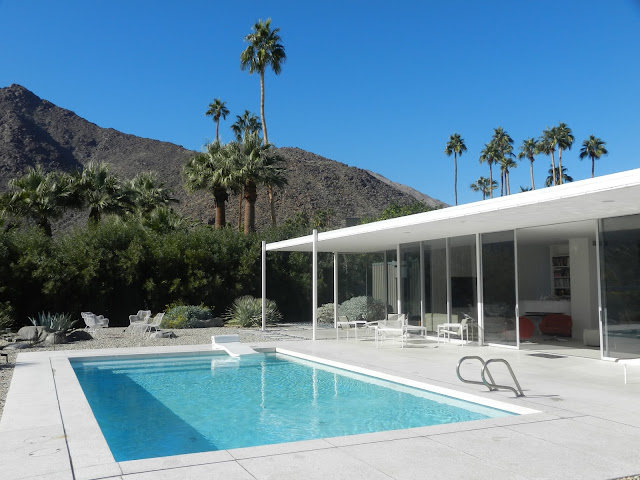 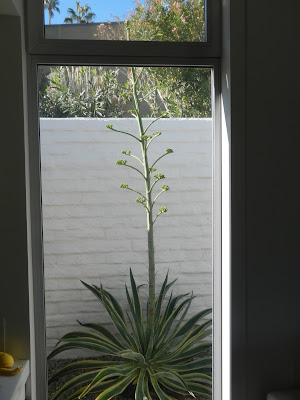 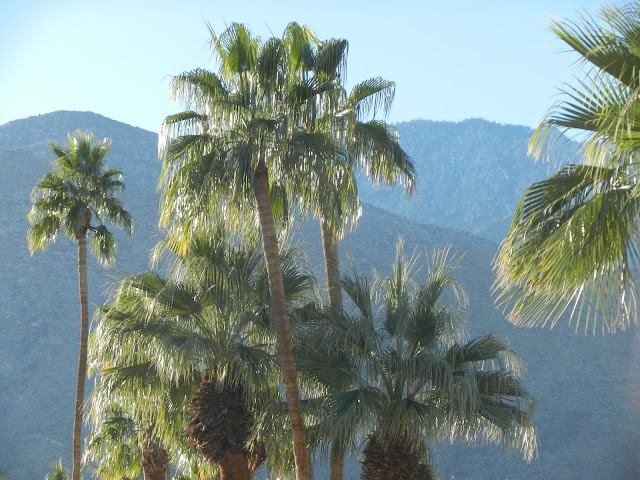