Another day at Armitage County Park

I got a request from the Exalted Ruler of the Friends of Lewis Fan Club (FOLFC) yesterday.   She said she hasn't seen many pictures of him lately and would like me to take care of that for her.

Here is a glimpse of our day at the river. 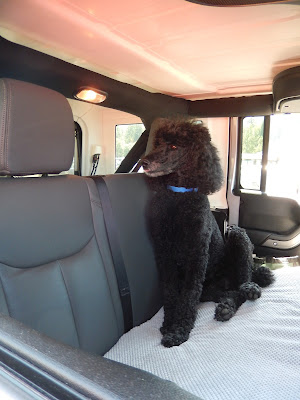 Lewis loves our new jeep.   He enjoys the smooth leather seat back and his nice soft cushion.   He feels secure in this jeep.   He is a tentative "rider" in the motorhome and was in the other jeep, but he seems quite happy to jump into this one and settles in for a nice ride.   That's nice for us.   We like it when Lewis is happy.

As you know, we were staying at Armitage Park, a Lane County park with full hook-ups, including cable tv.   The sites have nice separation and plenty of trees around.    Most sites feel quite private and there is direct McKenzie river access in many areas of he park.     Lots of places to walk, Lewis likes that. 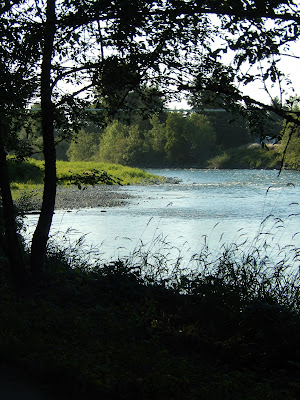 On our way to the river we saw a huge Osprey nest on the corner of the old trestle bridge.   It was a very active home. 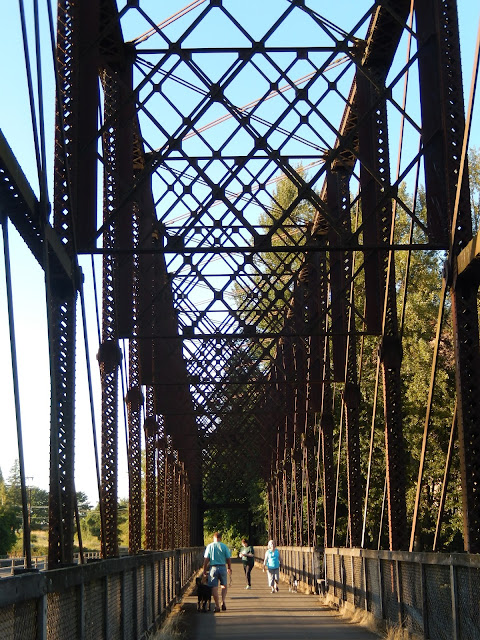 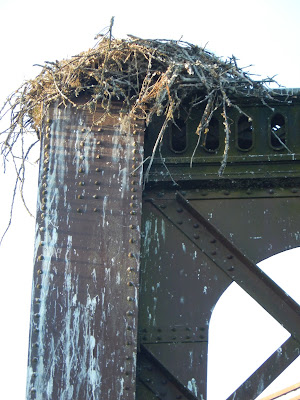 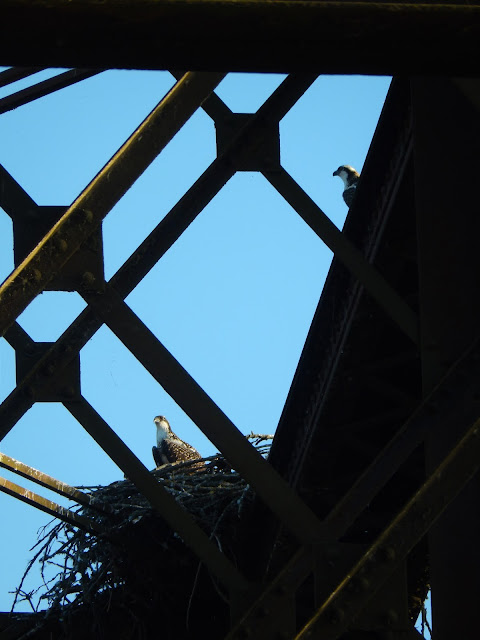 They must be social birds to put their nest so close to a busy road and pedestrian path.   They look down at us humans with some interest. 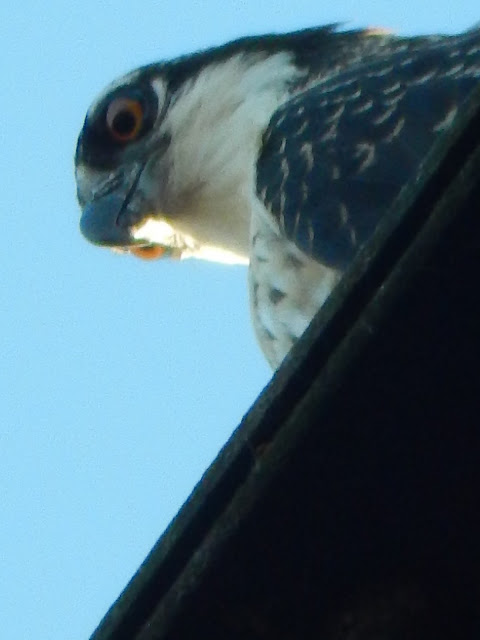 We spent one afternoon at the stony beach behind the park.   We set up our beach chairs and let Lewis loose to do what he wanted.   He wanted to play in the water and he wanted his ball.    We didn't bring it so he had to be satisfied with charging after rocks that Dave lobbed into the river. 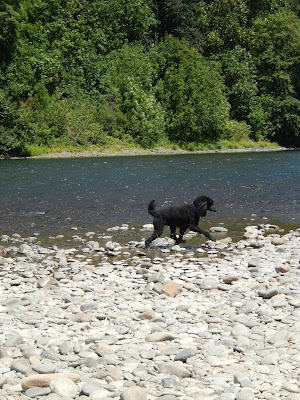 There were very few people around, just the way we all like it. 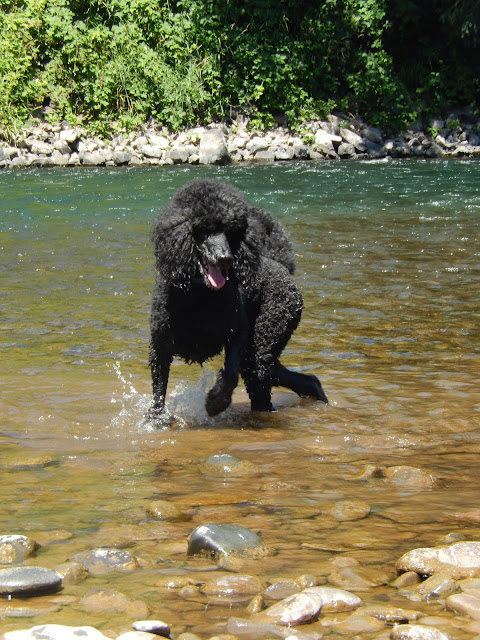 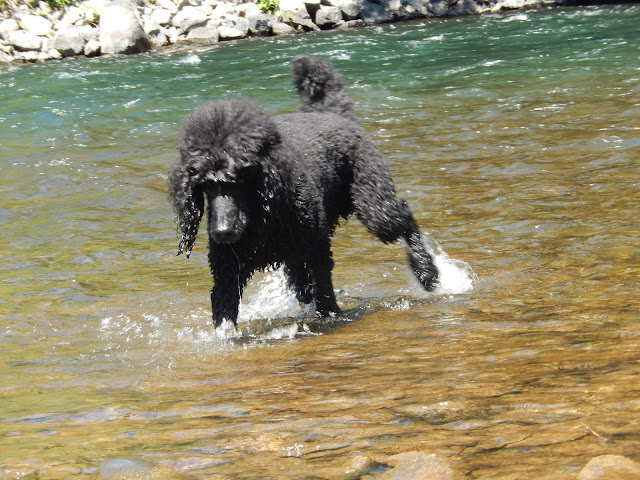 He played in the water and we enjoyed the sunshine until his head shot up and his attention was riveted somewhere downstream. 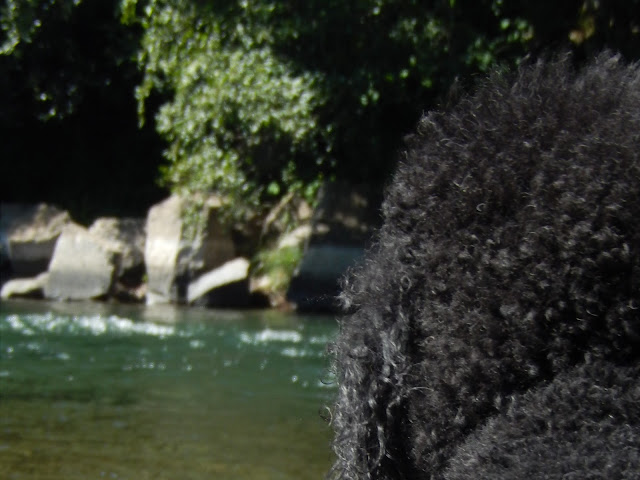 A man was walking (stumbling and balancing on the rocky beach) toward us, acting "funny" with his arms out to the side.    We could see that Lewis was becoming concerned. 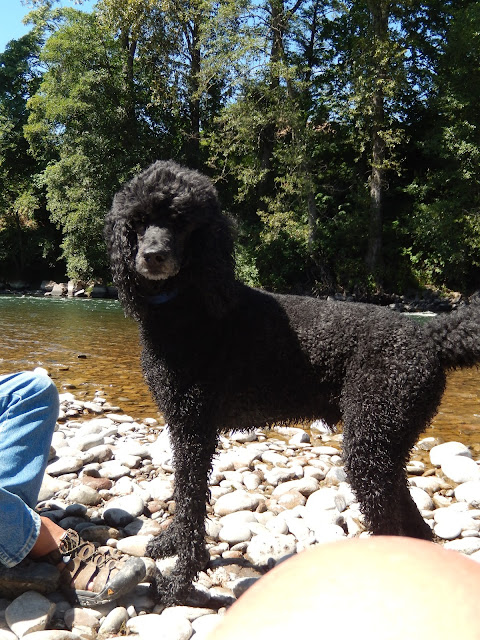 The man stumbled past us and waded out into the water.   He stood there quite awhile trying, no doubt, to screw up his courage to dive into the cold and fast moving river.

The man finally dove into the water and the swift current carried him past us, a little round head flying by.    We thought it looked like fun.....Lewis thought it was extremely suspicious and possibly dangerous.    To be completely safe he crawled up on Dave's lap (soaking wet) and watched the head carefully until it was out of sight.


After the danger was over, he resumed his water sports, keeping one eye on the river at all times.....just in case. 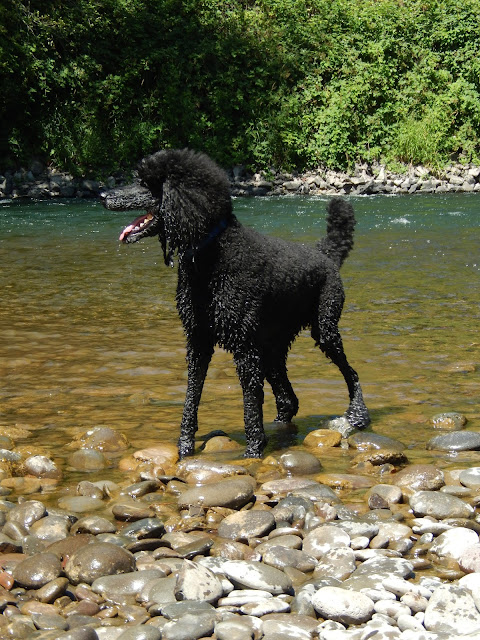