When it rains, it pours

Lewis' sand "episode" cleared up relatively quickly, for that we're grateful.   However, coincidentally, he seems to have a tooth root abscess.   I can't think the two could be related, but symptoms occurred at the same time and it's this nastiness that has us more concerned.   I won't go into the oozy details, but his eye swelled closed and he was in a lot of pain.      Another trip to the vet here got him some antibiotics and pain meds.    We'll leave for Eugene tomorrow to seek a canine dentist for xrays to better see what the problems is.   He's never really been sick in his 7 years and he's very stoic about the whole thing.   Except when he tried to chew on a bone the other night (the meds. are making him feel better mentally).   He let out a loud yipe and flew away from the bone as if it had stung him.  For the rest of the night he just sat on the couch, keeping an eye on the bone in case it tried to hurt him again....poor baby.

AND, I'm dealing with a bout of divertic that has me on antibiotics, bed rest and only clear liquids, AND it is raining. 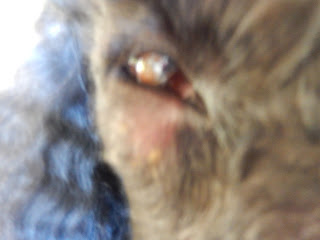 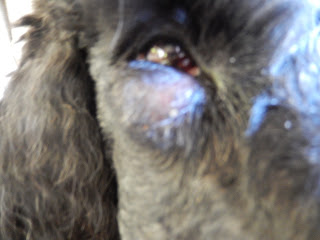 Later on I'll try to put together another post with pictures of our fun days on Wednesday and Thursday.   We checked out lots of places along the coast north of Florence and even watched whales while we ate lunch!
Posted by Suzi at 2:06 PM