Two beaches and a poodle

We're trying to take Lewis with us more since Sasha is gone.   We're happy he enjoys these outings, but want to make sure to maintain a balance.....happy to "go for a ride" and happy to stay home.

Today was a "go for a ride" day.   We packed lunch and headed to a nearby beach for some good exercise before heading south toward Port Orford. 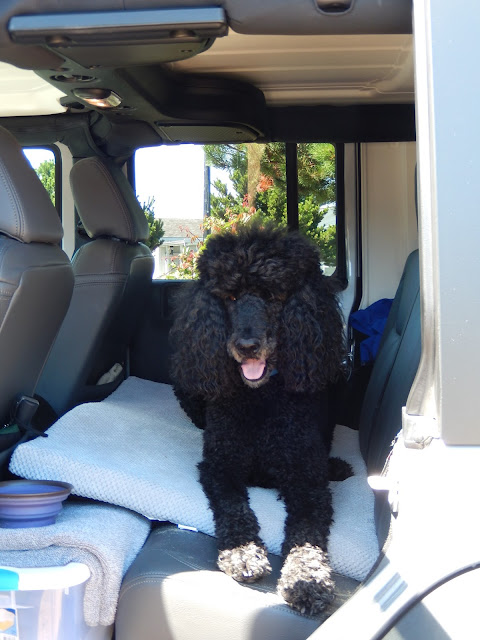 We first stopped at China Creek beach, just around the corner from our campground.   We were met by a volunteer who told us about the tiny Plovers nesting on this beach.   They are endangered and nest out on the open beach so dogs must be leashed at all times.    With Lewis whistling and barking in the back of the jeep we decided to move along to Devil's Kitchen beach where he could blow off all that pent up energy running. 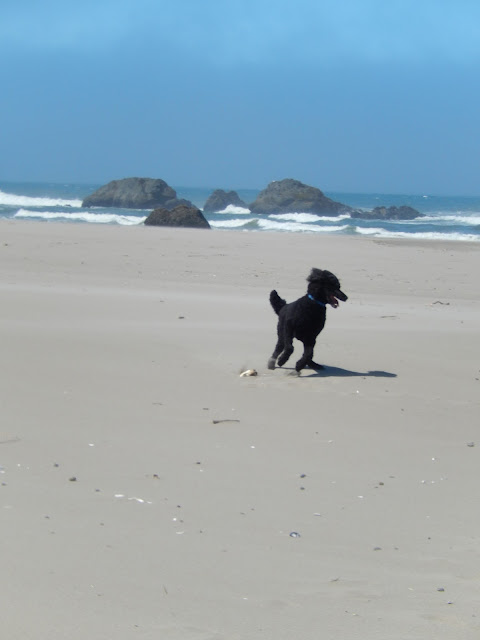 It was the right decision.   As in most beaches we've encountered in Oregon, we had this one pretty much to ourselves.   Windy again, but we're used to it now.

We drove south toward Port Orford.   There were two things we wanted there.  The first is to see the west's only Dolly Port.    Port Orford's port is an open water one so the fishing boats are not moored or docked in the ocean when not in use.    They are kept on shore on "custom" dollys and are put into the water and taken out by huge yellow cranes. 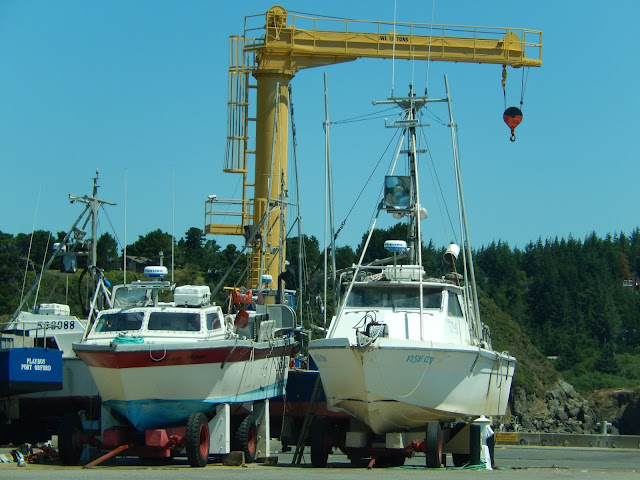 We sat in the car (out of the ferocious wind) and ate our lunch while waiting for a boat to be lowered into (or out of) the water.    We didn't have to wait very long before we saw a fishing boat coming in to port. 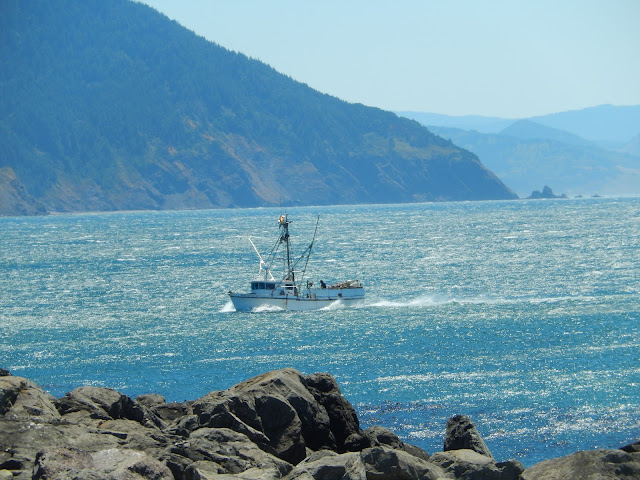 It pulled along side the dock at the base of the huge cranes to unload its cargo.   We watched through binoculars so as not to be in the way. 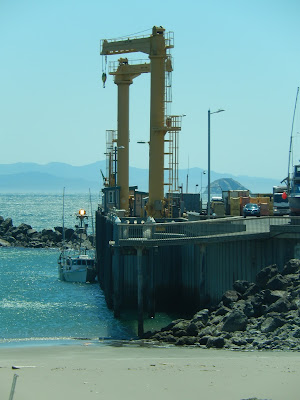 After they were finished, the workers crawled around the bow and stern of the boat attaching ropes and the crane swung over and dropped its hook.    The guys attached the hook and slowly, slowly, the boat came up out of the water. 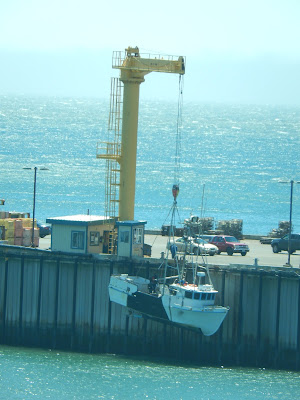 The guys crawled off the boat onto the dock and the crane swung the boat up and set it gently down onto the waiting, wheeled dolly.    An interesting procedure to watch, but sure seems like a lot of trouble! 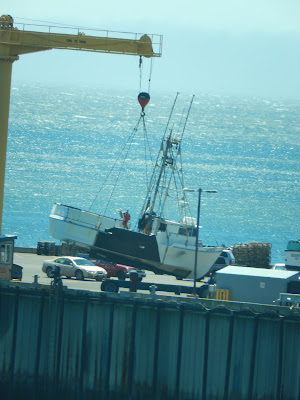 The other thing I wanted to do in Port Orford was to drive down the beach.   We found a way down off Jackson Street, right next to the Crazy Norwegian Fish and Chips shop.    Jackson Street turned into a narrow one vehicle wide dirt/sand track through the grassy dunes. We followed it and came out on the beach at the base of Battle Mountain.

The tide was out and we had a huge, wide beach all to ourselves.   We turned south, navigating around and through an area of huge beach rocks.   Fun! 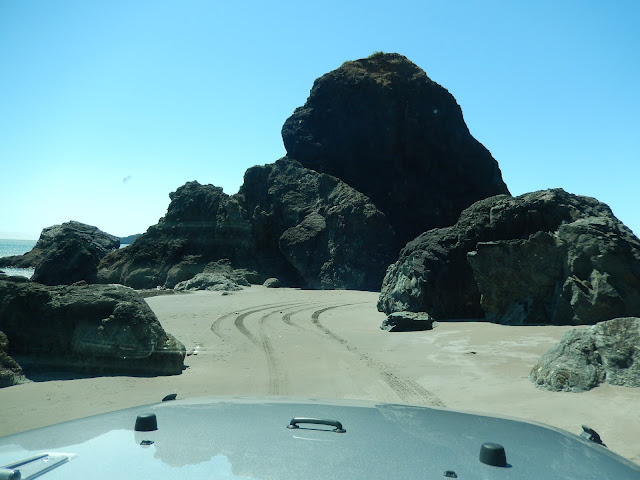 We found a spot we liked and parked.   Out went the poodle and we three continued our trek down the beach on foot. 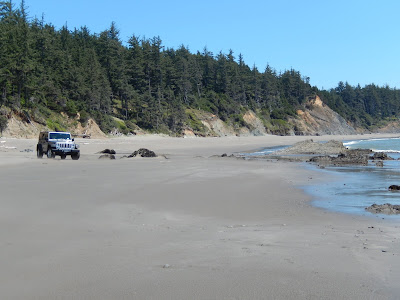 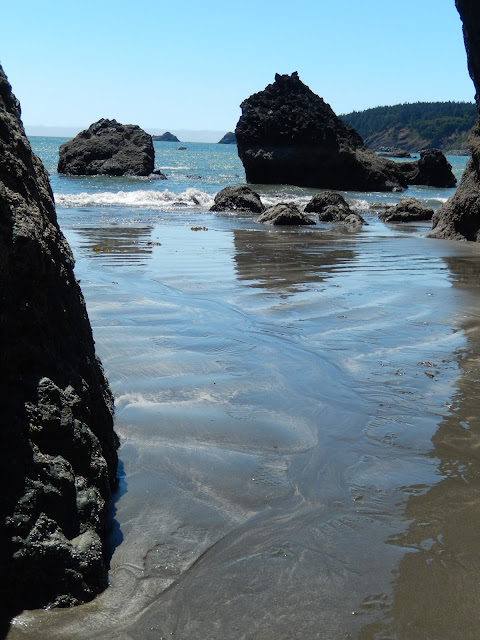 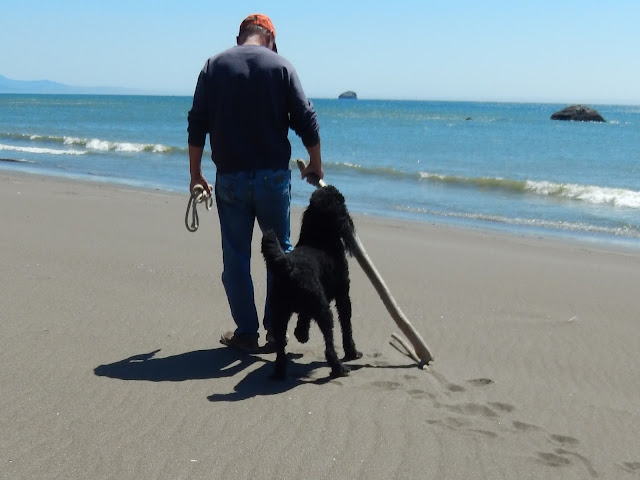 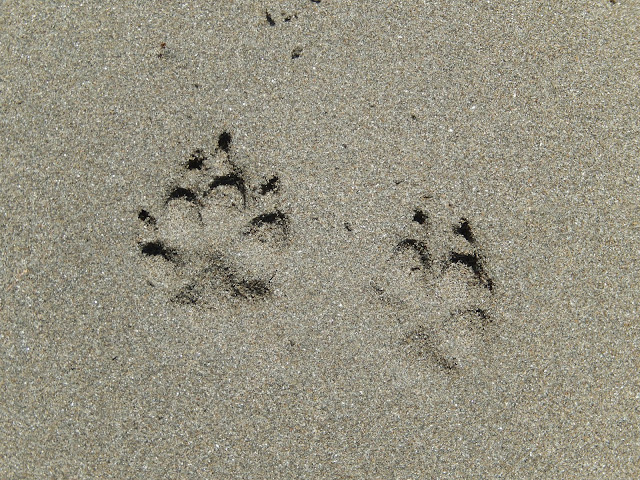