Monday we had a relaxing morning, a bit of laundry, a pleasant second cup out in the sun and after lunch we enjoyed what we enjoy most - bumbling around on dirt roads. 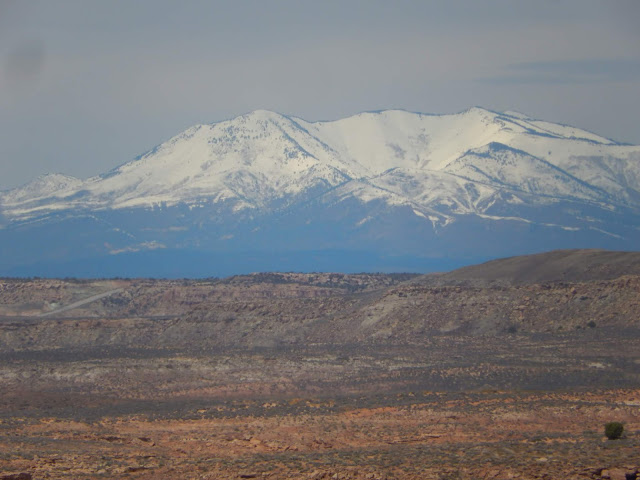 Sometimes we have a clear destination, sometimes we just turn the Jeep onto a road to see where it goes.     Monday was a little bit of both.   Our neighbor here at the campground asked Dave if we had seen the "hoo doos".    Dave said we had not so John gave him some very loose directions.   "Head out of Bluff and turn right on one of the dirt rds, you'll pass a couple oil rigs".    So, off we went.

We made a right on one of the dirt roads, passed a couple oil wells and so on and so on. 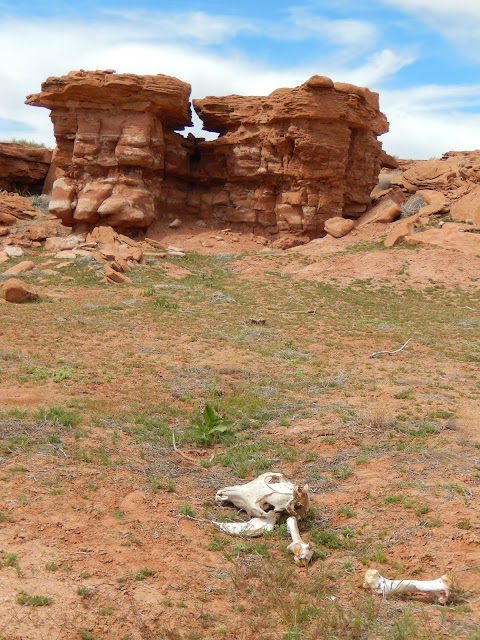 One spot we stopped to check out some interesting rock formations.   As we walked out into the field we noticed some white spots that looked like they could be bones scattered everywhere. 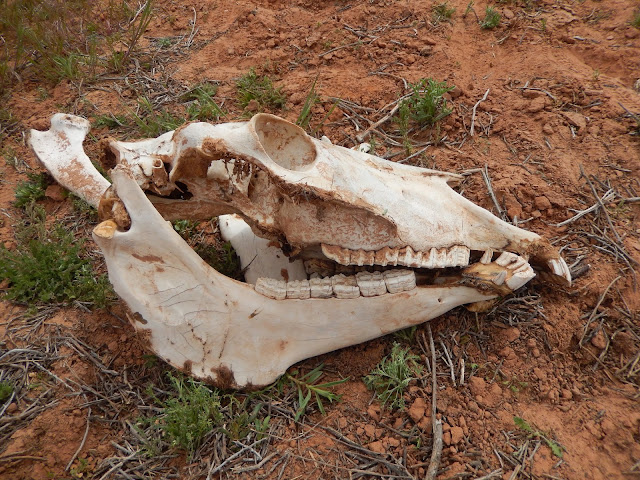 Since this area is open range, we assumed they were from an unfortunate cow but as we got closer we saw they were not bovine bones. 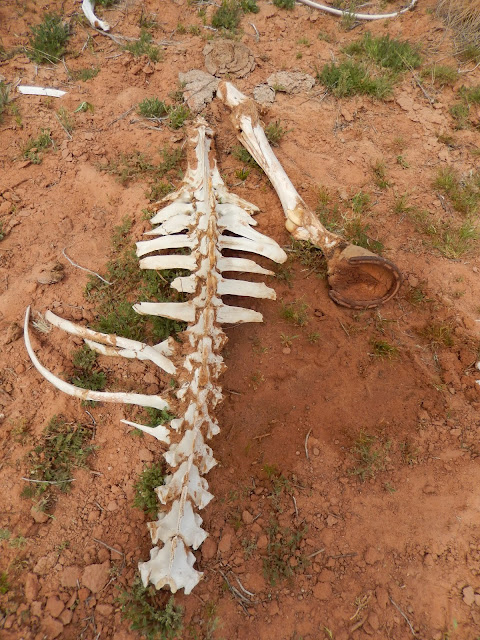 They were equine bones.   They were from a relatively small horse that had obviously been owned and ridden by someone at some point in it's life, probably not too long ago. 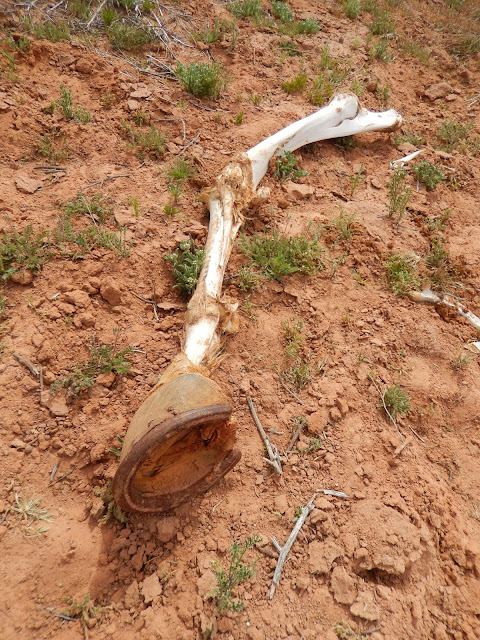 The three legs/hooves we found all had shoes on.    Sad to think about, nasty to look at, but interesting to look at also.      There was even chestnut colored hair still on the fetlocks.    From examining the teeth, we deduced it was probably middle aged.    Do you think we read too many forensic mysteries?

After a few more turns we came upon what John was probably talking about, a feature my Utah Benchmark map called "Chimney Rocks". 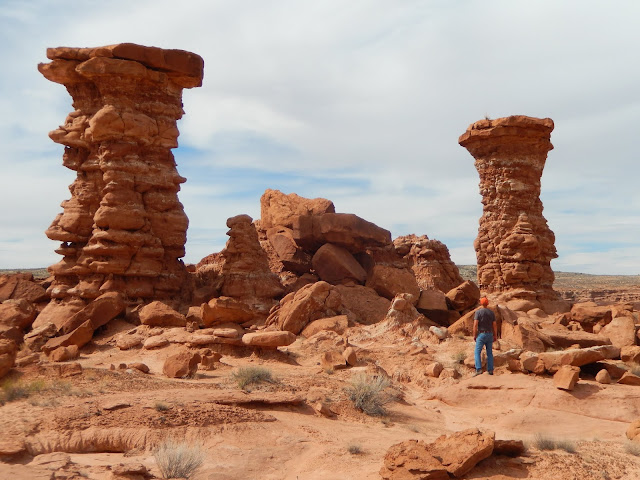 We hiked around among them for quite awhile before getting back on the road again.    The map showed that this road may possibly take us out to rt. 191 and save miles of twisting and turning trying to find out way back. 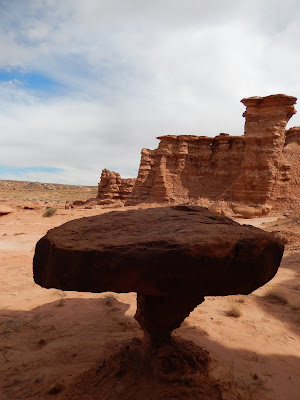 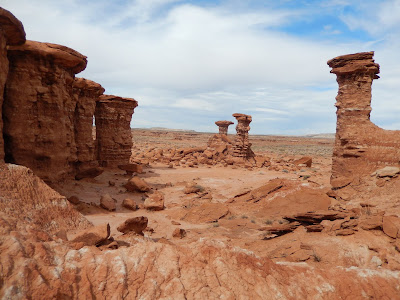 Long story short.....the road we were on did not connect and after one last rutted hill that led nowhere we decided to just go back the way we came.


No matter, the scenery always looks different from the other direction! 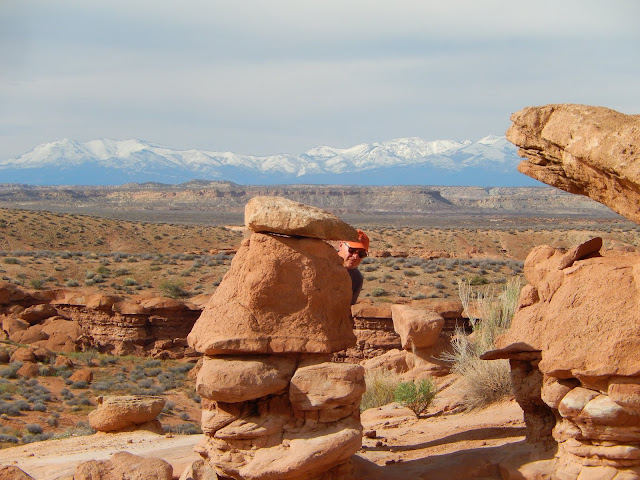 The wind was blowing so hard that it actually rolled the loose sand surrounding these formations into tiny, round balls. 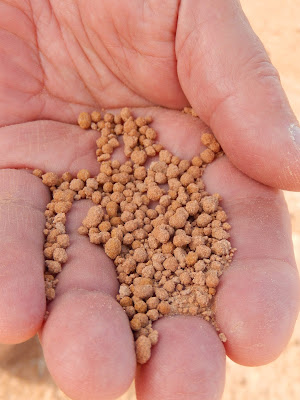 Today, Tuesday, we drove (on mostly paved roads) to the Natural Bridges National Monument, about 60 miles north and west.      From Bluff there are two routes to take.    One of them would entail driving up the Moki Dugway, a graded dirt switchback road carved or dug into the face of the cliff edge of Cedar Mesa.  This route consists of 3 miles of steep, well graded switchbacks (11% grade) which wind 1200 feet from the valley floor.    I've avoided riding on this road each time we've been in the area and today I decided it was time to just do it. 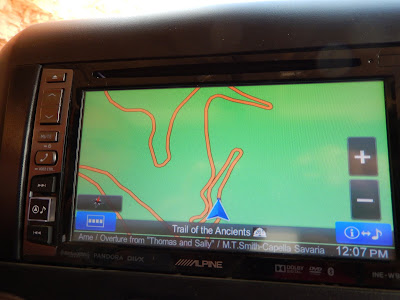 Thanks to Dave's careful and thoughtful driving skills, I'm happy to say I did it!

The rest of the ride was a piece of cake on nice, paved, flat roads.

The sky was dark and it was very windy when we arrived at the National Monument, the Visitor's Center was closed.    We drove the Loop road and stopped at each viewpoint.   Natural bridges and arches are often difficult to pick out from a distance.   I hope you can see them in these pictures. 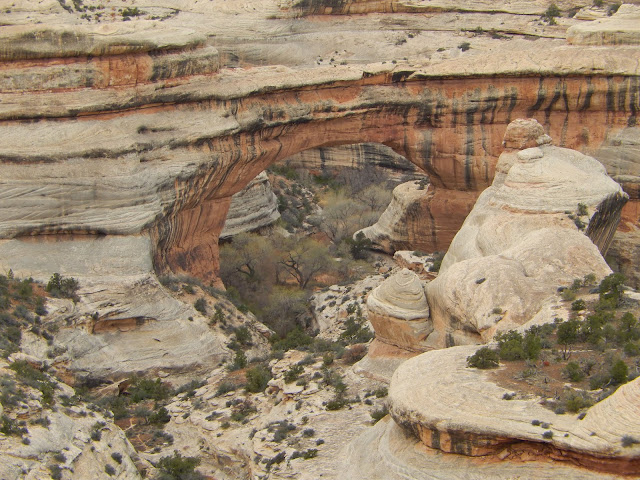 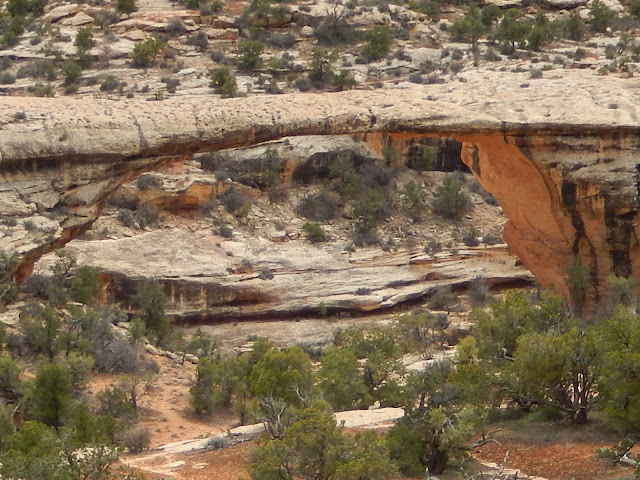 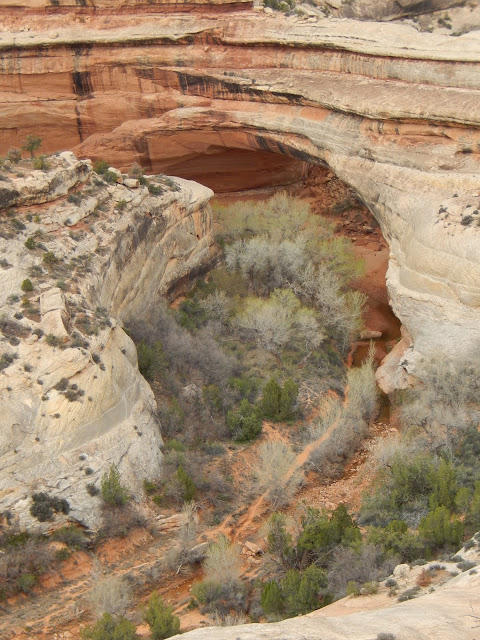 Dave rewarded my Moki Dugway bravery by buying me dinner at the Twin Rocks Cafe.....I'll never pass up their Chicken Noodle Soup (which is really more like a stew with dumplings instead of traditional noodles) and Navajo Fry Bread with honey..... 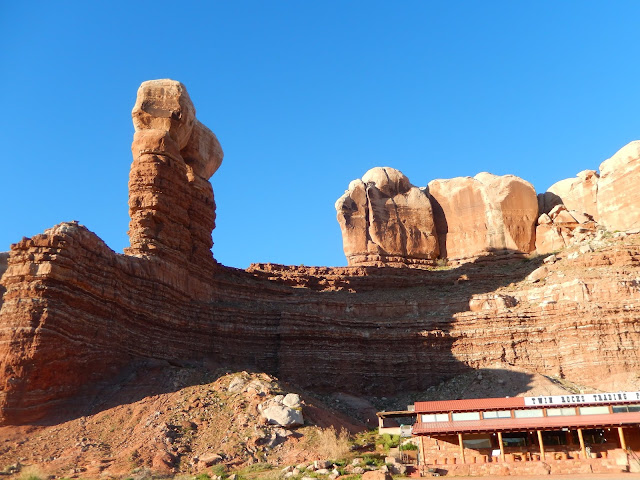