We're loving Kanab.    Yesterday we stayed "home", moved to a different site in the same park, took time to make a good dinner and generally relaxed.   Today, Monday, we packed our lunch and set off to see a nearby slot canyon. 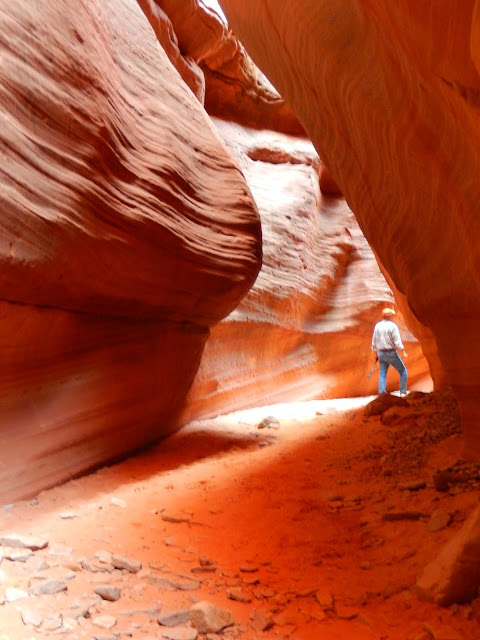 We understood that it wasn't too far from town and that it was spectacular, rivaling legendary Antelope Canyon on the Navajo Indian Reservation.    To gain entry to that slot canyon, one has to pay to join a large tour group and be escorted into the canyon a few a time.   A couple minutes to take your pictures, come out so the next group can enter, etc., etc., etc....  We haven't taken that tour so I may not completely understand the experience but it doesn't sound like something either of us would enjoy.   We like to quietly take our time and absorb everything on our own.   Just us. 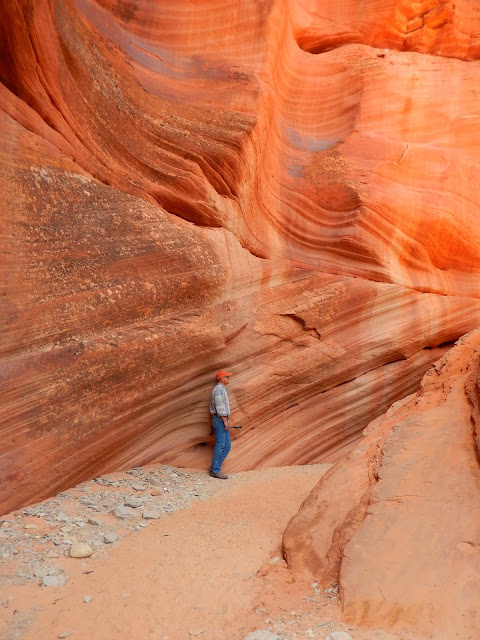 We drove north on 89A, past the turn for the Best Friends Animal Sanctuary and turned off onto the Peek a Boo Canyon trail head.     We used the staging area there to air down our tires as we had been advised to do in order better handle the 4 miles of deep sand we would encounter.     Our next door neighbor at the campground had warned us that the road in (102) was extremely deep sand and that he almost "didn't make it" so Dave was concerned about our ability to get to the canyon and back but he gamely plunged down the hill and into the sand.

Our instructions were fairly good and we made it into the wash that eventually led us right to the mouth of Red Canyon (peek a boo slot).    We passed one vehicle stuck in the sand but didn't dare stop for fear of getting mired ourselves.

We subscribe to Pam's philosophy of arriving at popular places just around lunch time to avoid the early risers (who are just leaving the area) and the later afternoon crowd (who are coming in when we're on our way back) thus having the place to ourselves.    Our timing was a bit off because there were two Hummers at the rough parking area, along with one other truck.   No one was around so we assumed the vehicle's inhabitants were in the slot.     We took our lunch and found a nice sunny spot to eat and let the other's get their fill of the scenery.   Worked like a charm, they were all getting back into their vehicles as we walked back up the wash.

There appeared to be two ways in.   We took the path to the left and were instantly rewarded. 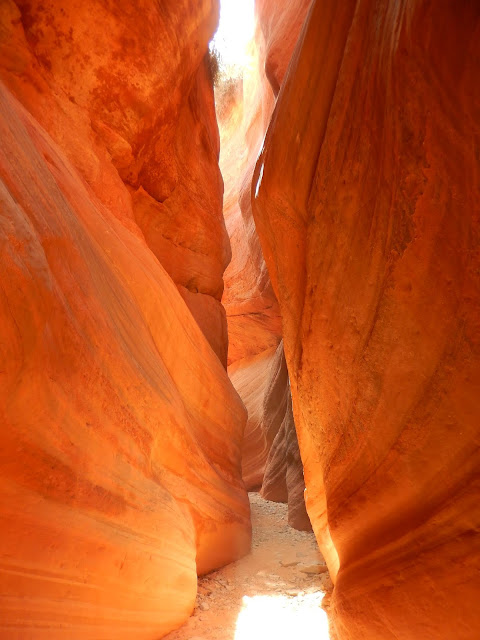 This slot canyon has two sections.    We were advised to keep walking when the canyon appeared to open up.    Don't turn around at that point, she told us, keep going - there is another not to be missed section ahead with a dead end. 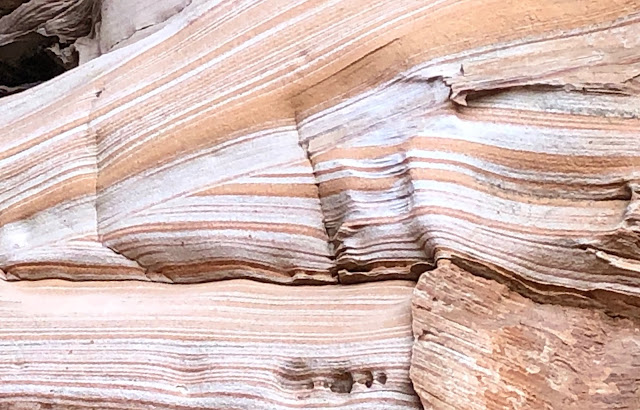 Water leaked and plopped from high above in some areas.   The sound was beautiful.    We saw a set of ancient Moqui steps carved up one steep side. 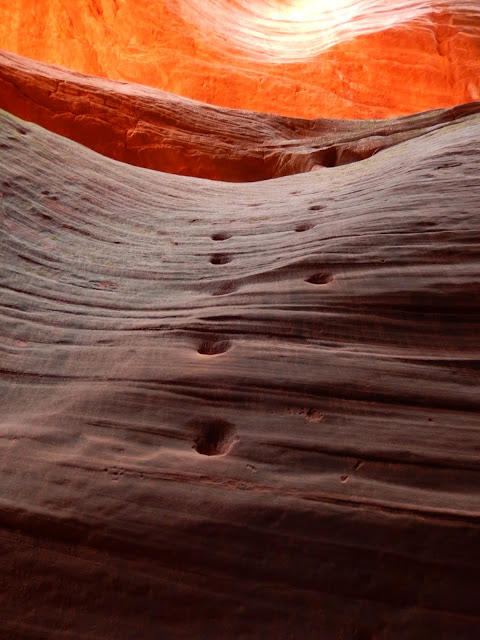 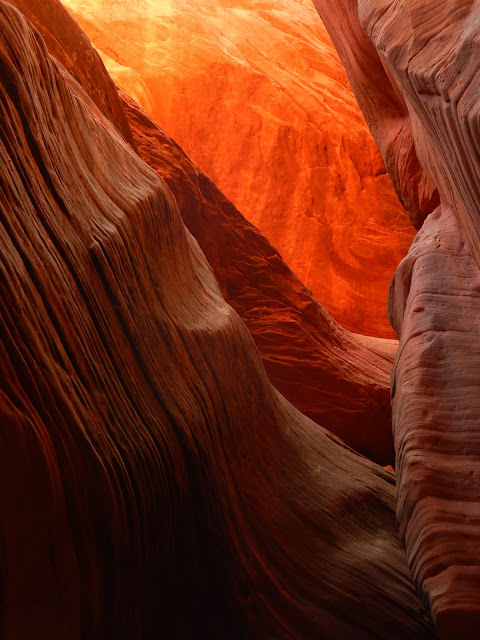 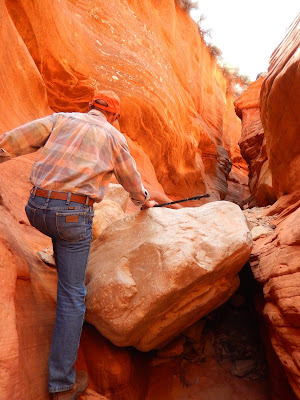 There were a few obstacles, a large rock to clamber over and a pine tree diagonally across our path but nothing much to alter the smooth pathway between high red walls. 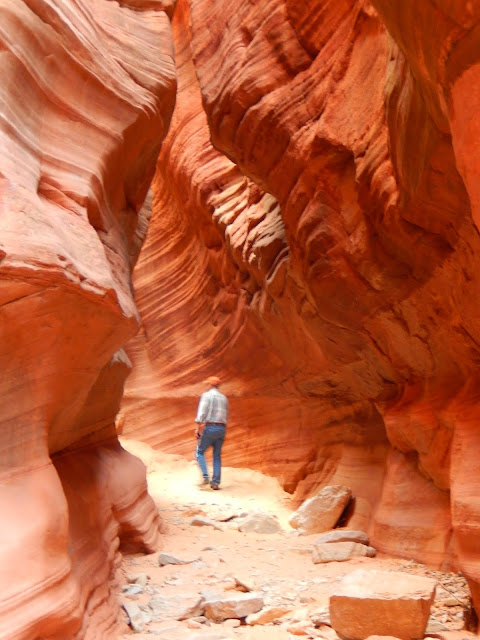 In one spot we could see how high the water had been at one time.   Over our heads we saw a log and dry flosam stuck between the walls where swift flowing deep water had left them. 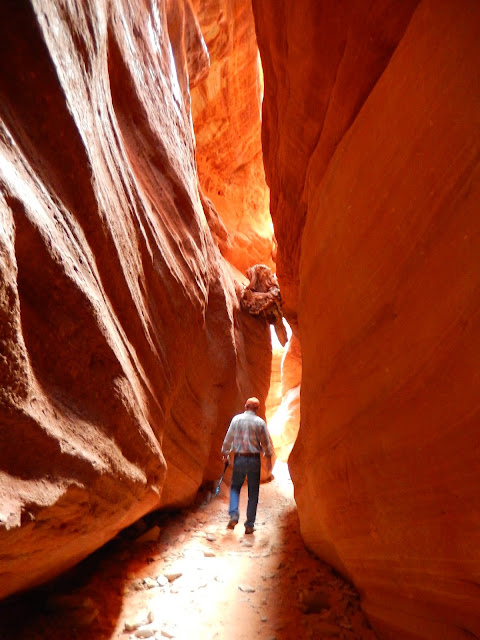 During the entire time we were oohing and ahhing our way through both sections of the slot (about 1.3 miles)  we only ran into two other people, going the other way.....

Before getting back into the Jeep we took another small path that ran alongside the outside of the slot.   It looked like it went somewhere.... 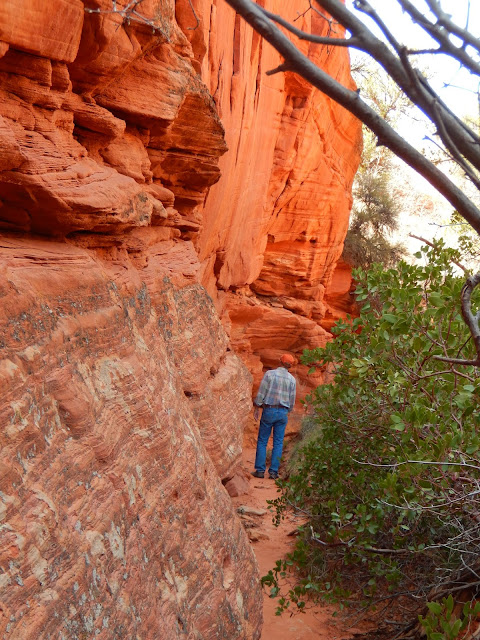 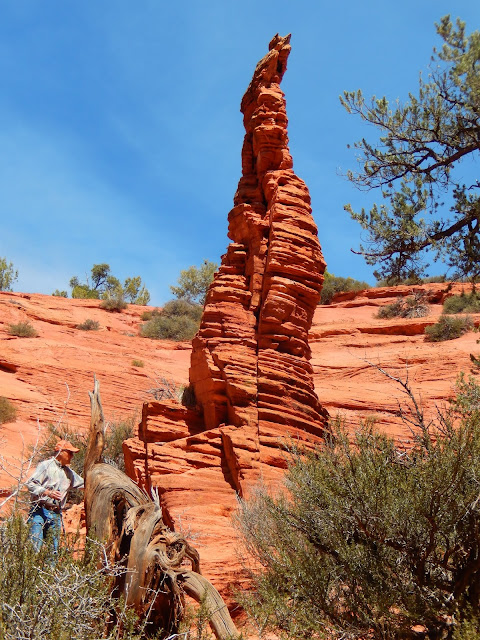 Once back in the Jeep we expected a difficult ride home.   Coming in we slowly lost ground from the trail head to the slot.   It is much easier to drive in very deep sand when going downhill.     It was strongly suggested to take a slightly alternate route back, to avoid the worst hill.   We were looking to veer left onto 102M as that alternate when encountered two very tired looking hikers slogging through knee deep sand up the road.   We asked if they would like a ride, and they immediately thanked us and got in.   Tom and Merlene were from Virginia and had hiked all the way from the trail head to the slot, through the slot and were making their way back to their little car.    They were exhausted and were happy for some relief.    We enjoyed their company.

Shortly after we picked them up we came upon a small Jeep Cherokee firmly high centered in the middle of the track.   We got out and tried to help them move forward or back.   We pushed, they strained and dug.   Dave angled our Jeep around and tried to push/pull but nothing budged it.

Finally we all agreed that there was nothing we could do to help.   We offered to call for help when we got to a place with cell coverage but the driver casually said she had coverage and would call herself, so we reluctantly left them to it.

We took our passengers on a little extra tour to the nearby hidden lake before we dropped them off at their car.   A delightful couple.

Pizza, wine and early to bed for us tonight, we're beat after a full, exciting day.