Marathon Monday at the golf course, but we didn't play.  It looked very busy judging by the golf carts softly whirring by us this morning so we decided to take a little hike along the John Wayne trail.  We drove through this golf development and parked alongside the road.  The river was tantalizingly close so we took a little path through some low brush and over some rocks right to the water's edge.  I say "over" some rocks, but what really happened is we walked "on" some rocks (submerged....) to the water's edge.  Wet shoes, but well worth it.  The water is so clear as it tumbles along over large boulders and past the homes that line our golf course. 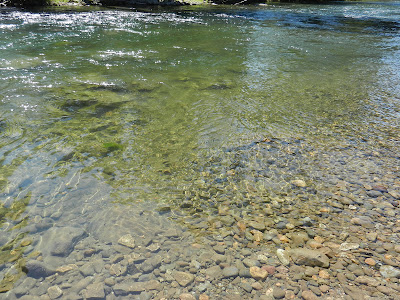 We walked through the water again, and up some "stairs" to the trail.  Luckily the stairs had a rope pull next to them, so I had no trouble scrambling up to the upper level.  We crossed the river again on this old trestle and strolled along for quite a way.  I had hoped to walk between the Yakima River and the Cle Elum River, but as we hiked along, I noticed all the beautiful berries on either side of the trail.  They made me think about the creatures that would love to feast on these berries, then I thought about bears....  I scared myself thinking about encountering a bear on this empty trail, so we turned around before we found the Cle Elum.  What a wimp I am....

We got in the car and drove a few miles to the old mining town of Roslyn.  Its the town where the tv show Northern Exposure was filmed.


Later, as we sat outside enjoying our cocktails and waiting for our chicken to finish grilling, Dave exchanged a few pleasantries with the man who took the spot next to us earlier today.    We had already decided he was alone and when he told us he had forgotten to take his steak out of the freezer so he was going to grill a hamburger, we knew he was by himself - yet there were two matching chairs set up next to his old motorhome.    He seemed to want to talk, and we found out that his wife just died and this was his first trip solo.  Our hearts twisted in our chests.  His wife had developed Alzheimer's and died a slow, frustrating death.  Dave suggested they play golf together tomorrow, we'll see if that works out.

Dave and I had just been talking about what we would do if something happened to either one of us.
That conversation, no doubt was prompted by this lone man next to us.

We ate our dinner quietly, each reflecting on our conversation with Pat and thinking about how short life is.  Every second is important, don't take life for granted.        Remember that.
Posted by Suzi at 11:20 PM