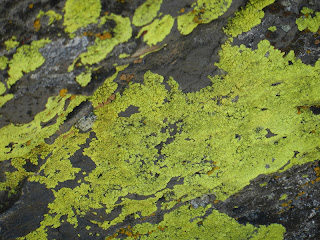 Another lazy morning, coffee/tea outside, then we headed out to a local cafe for breakfast at lunchtime.  Yumm, it was really outstanding and way too much to eat at one sitting, so we brought things home to incorporate into a steak dinner tomorrow night at our next stop, a Corps of Engineer park in Plymouth, Washington.    After lunch we drove around the area a bit and continue to be  impressed with the obvious  pride these people take in their city.

As we were driving, I had a great call from niece Lisa.  She gave me the good news that their mortgage commitment came in and they will be moving into a beautiful new home in August.  Congratulations Lisa and Chris.

We couldn't leave this place without a visit to the Oregon Trail Interpretative Center in the Falstaff Hills.  We've been following the path of the trail since we entered Idaho and talk often of how difficult this trek must have been for the 300,000 or so souls who made the trip on foot or prairie schooner.

The building that houses the Interpretative Center is set high atop one of the golden hills,huge windows looking out over the vast plains and the rutted tracks of the Oregon Trail.   The Center is the only structure for as far as you can see in all directions.   Nothing but the rolling, yellow grassy hills.   No trees, no houses, nothing but the silence surrounding you.  It is quite a powerful site. 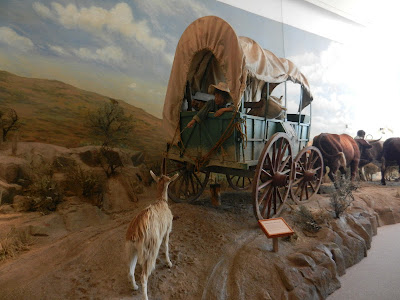 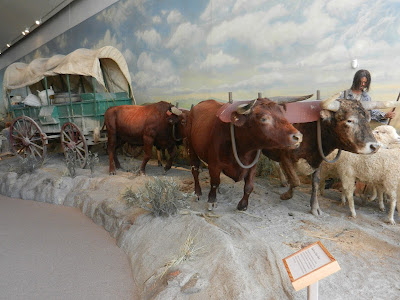 The first part of the center consisted of a life-sized diorama depicting what life on the trail may have looked like.  As you approached each group, a voice of one of the people in the scene would begin talking about what was happening in front of you.  The people sounded like they were reading from letters written by real people on the Trail.  It drew you in as you walked along toward the huge windows on the end of the room.

The rest of the center had videos, paintings, displays, and question boxes that really showed, in a number of ways, what the experience was like and why people felt they wanted to endure the hardships inherent in such a trek.   I was so enthralled as I moved through the different areas, I totally forgot I had a camera in my hand, so no pictures for you! 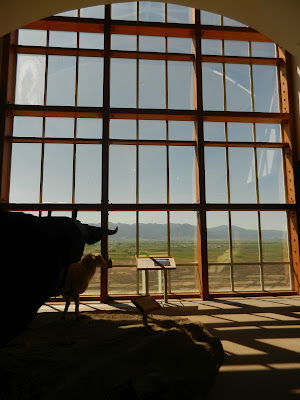 And then, there was the Trail...It really moved us to stand in those ruts in the hot sun, in utter silence, to look ahead to what those people saw.  Especially since we're driving on a part of their original path with our luxury liner instead of a prairie schooner.  Incredible. 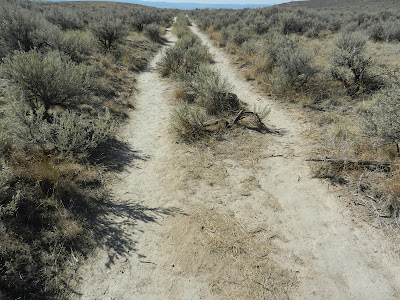 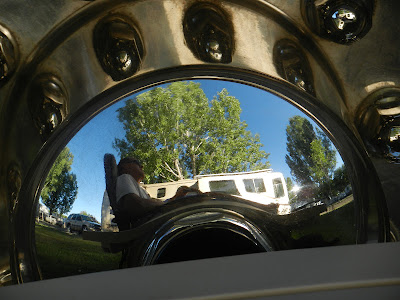 As I sit in my outside chair, tea in hand, this is what I see reflected in Beluga's shiny  (Alcoa) aluminum wheel....pretty nice life I've got.
Posted by Suzi at 12:30 AM