We're finally in the same state as Jesse!

Not much to talk about  today, it was just a driving day.  We left Baker City around 11 a.m., a little later than usual because we only had 180 miles to reach our next stop, Plymouth Park (a Corps of Engineers park along side the Columbia River in Washington).  We ascended into the beautiful pine forested peaks of the Blue Mountains and descended onto a broad, flat plain covered with a patchwork of enormous golden grain fields.  A sign told us that we had just crossed the 45th parallel, exacly halfway between the equator and the north pole! 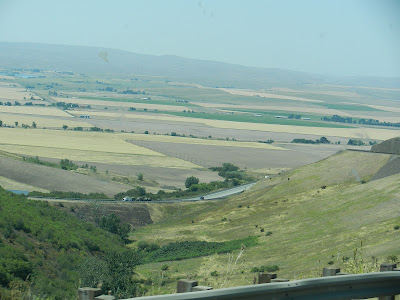 We crossed the Columbia River on I-82 at the McNary Lock and Dam and followed the river just a short way to our home for the next 3 nights.  We have this beautiful site for only $12 a night!  That National Parks Senior Pass is the greatest thing we've ever purchased!  It even gives us 1/2 off these Corps. parks.

I had a couple of nice phone conversations this afternoon.  One with Barb Sullivan.  She is driving herself across the country (from Sacramento) to start her new life back in Rochester!  It will be wonderful to have her nearby again.  She moved to California years ago and has decided she wants to be near her grandchildren, so she'll be there waiting for us when we get home.

The other call was from a dear friend in Canada.  Diana had our first guide dog, Pilgrim until his death a few years ago.  They were best buds, even after he could no longer safely guide her.  She hasn't had another guide dog since Pilly, but now has applied, and been accepted for a new dog from a Canadian guide dog school nearby.  She is waiting for a .......Standard Poodle!!!!  I don't know who is more excited, Diana or me.  She'll stay in touch with us throughout the process - we wish her the best of luck.

Dave has absolutely crashed on the couch, so I'm going to tiptoe around and put together some burgers and macaroni salad for dinner.  Thats all for now.
Posted by Suzi at 7:58 PM