We went to bed last night with plans to search for arches in the Alabama Hills in the morning.     It rained in the night and the wind howled around the campground.     When we woke up this morning, the rain was gone and skies were blue but the wind was still with us.     It was a cold north wind that had Dave pulling in Beluga's awnings.

Pam came over and, after some discussion, we re-thought our plans to clamber around the rocks in the chilly, strong wind.    We'll save that for another, calmer day.     We packed lunches and got into their jeep for a day of auto hiking instead. 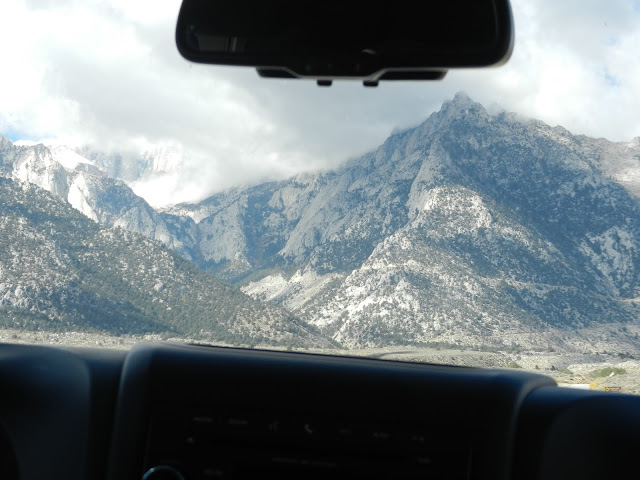 Pam and John have a strenuous hike planned that starts at the end of Whitney Portal Road, so the first stop on our auto hike was the end of that road so they could check out the snow levels.     Yep.....another shelf road ahead, can you see the beginning of it in the picture above?     There aren't many people I'd ride with up a shelf road, my phobia of heights you know, but John is one of them.       Besides, its so beautiful up there. 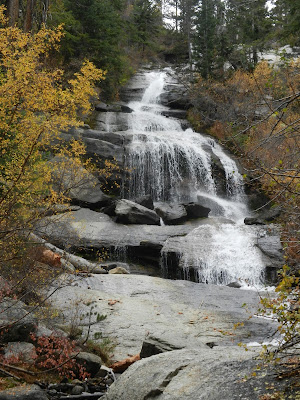 Its beautiful, but also pretty cold.    We didn't encounter any snow but we did see lots of water and waterfalls.   We zipped up our jackets and took a little stroll around. 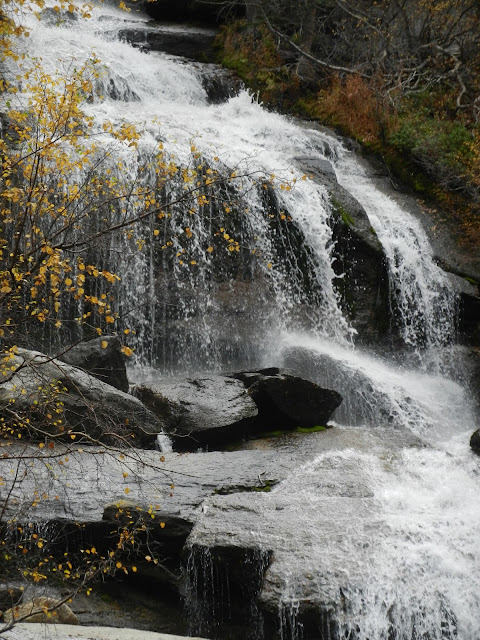 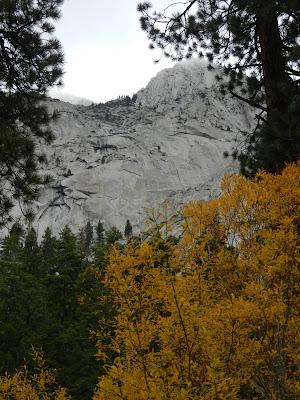 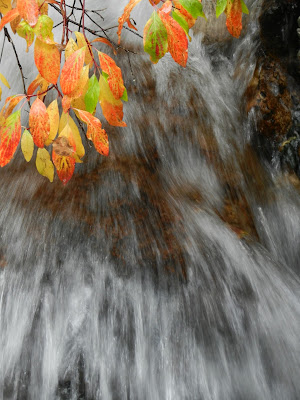 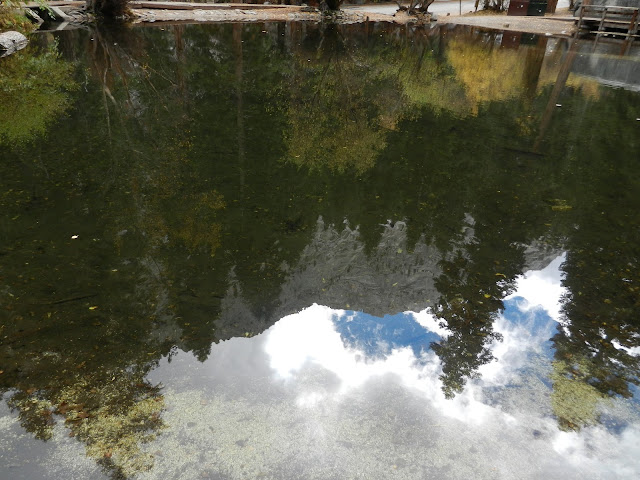 All the waterfalls and small streams ended up going through this calm pool.  Bill, there were a few fish in it and we saw someone walk by with a pole..... 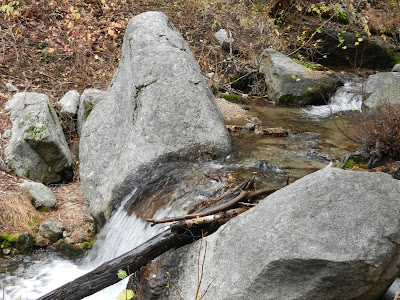 Water tumbled over, around and through big boulders and small rocks. 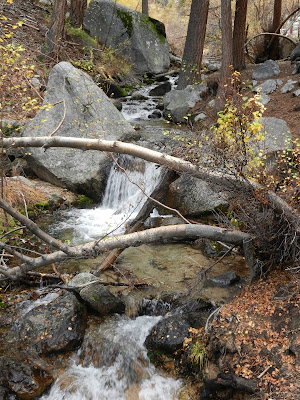 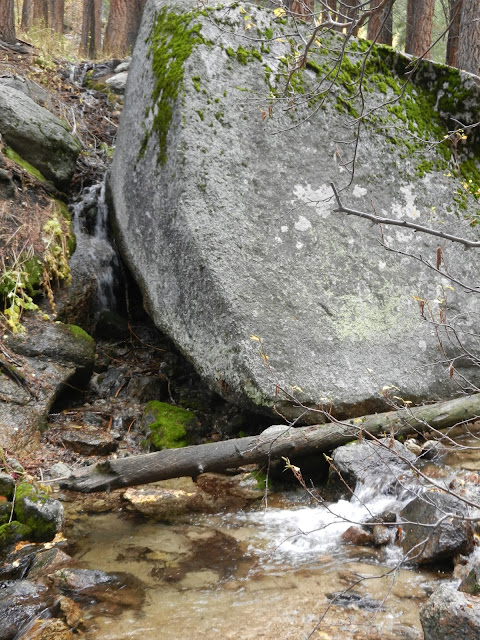 They found their trail head so we got back into the Jeep and headed back down to find a warmer place for lunch. 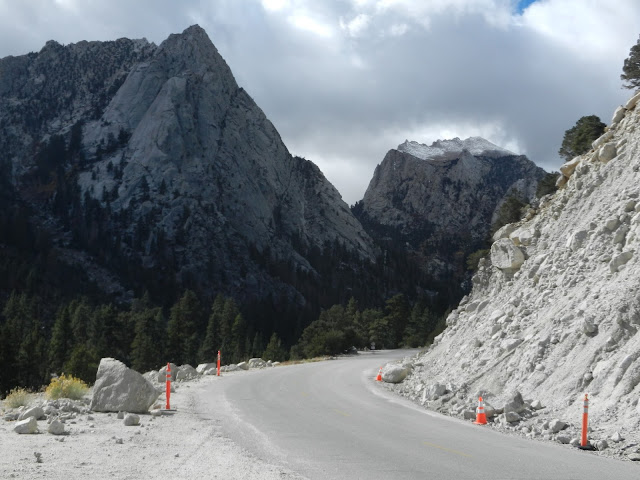 One of the curves in the road was lined with recently fallen rocks.   We assumed they were loosened by a storm the other day, but we also wondered (only half jokingly) if they slid down the steep walls as a result of the vibrations from the deafening flyovers of F-15s and 16s on maneuvers over the Owens Valley.

Yesterday an F-15 banked over our campground so close that we could practically see the pilots grin.....The sudden, thunderous noise dropped poor Lewis right to the ground as we were coming back from a walk.   It left me weak in the knees.     Dave, however, loved every second of it - his smile was ear to ear!          I digress.....


The view from the curvy road was stupendous.    We could clearly see the Alabama Hills and their place in the valley.    From the golf course yesterday they looked very tall, from up on Whitney Portal Road, they looked very small. 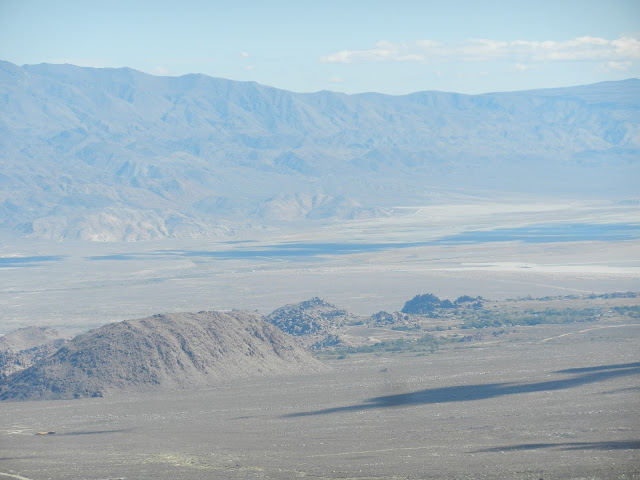 We decided to drive into them, on Movie Road, to find a suitable lunch spot out of the wind and in the sun.


We walked around amongst the large boulders, looking for a good spot.   It was hard to focus because we were fascinated by these jumbled piles of rough rocks. 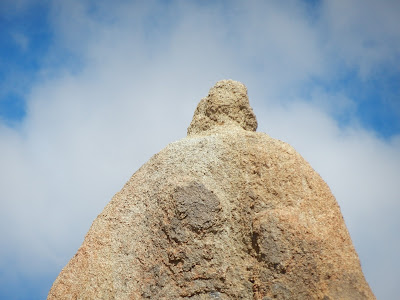 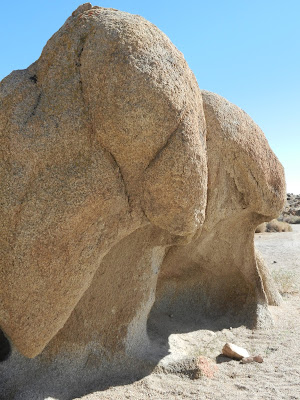 We settled down finally, picked a sunny spot and enjoyed lunch and good conversation about movies shot in these unique environs. 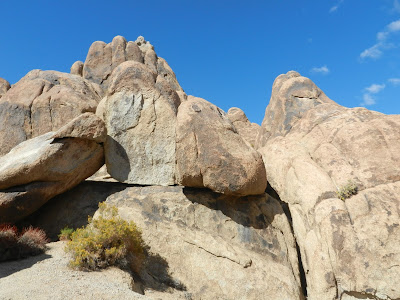 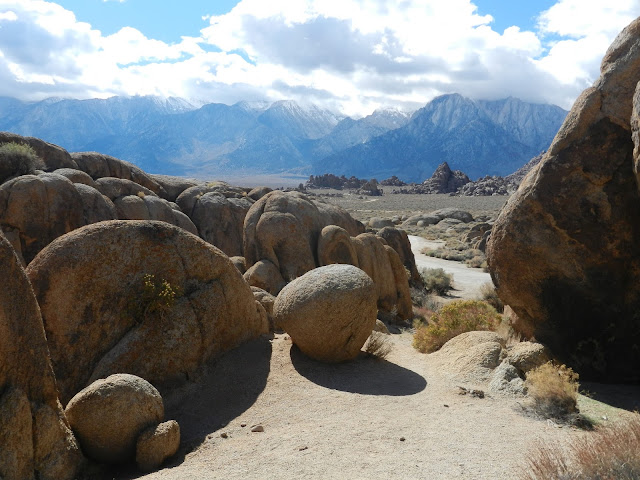 The wind forecast is much better for the next few days so we look forward to coming back and exploring properly later this week.

Next up was a fairly long drive, along the dry bed of Owen's Lake, through a small outcropping of Joshua Trees and into the semi-ghost town of Darwin. 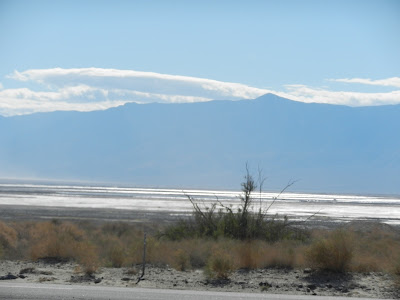 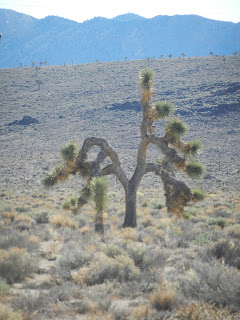 I say Darwin is a "semi" ghost town because it was once home to over 3500 people and was the largest town in the county.  Today there are only 50 people living there, none under 25 years old.    It was an isolated mining town in its heyday but now it appears to be home to what I call "rugged individualists", people that seem to love its quirky rundown ambiance.    We only saw one person the entire time we drove its streets and he was sitting high up in what looked like a glass turret behind a ramshackle house.    We got the distinct impression he was watching us...I didn't take a picture of him, it didn't look like he would appreciate it. 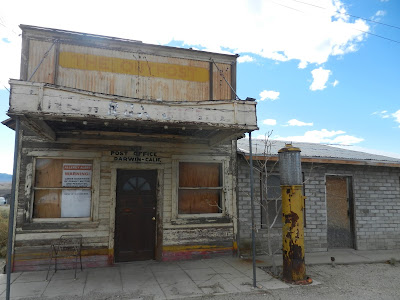 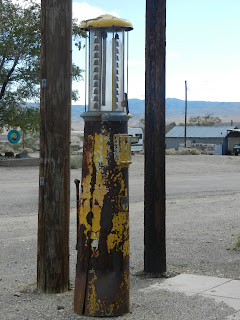 Some homes were mere shacks, some were very interesting in a quirky, "junk is art" kind of way, and some were clearly uninhabitable. 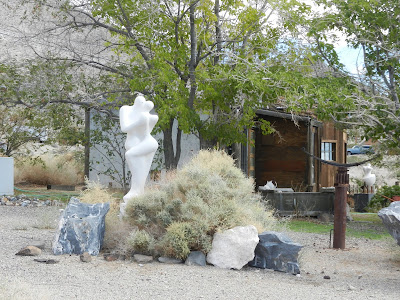 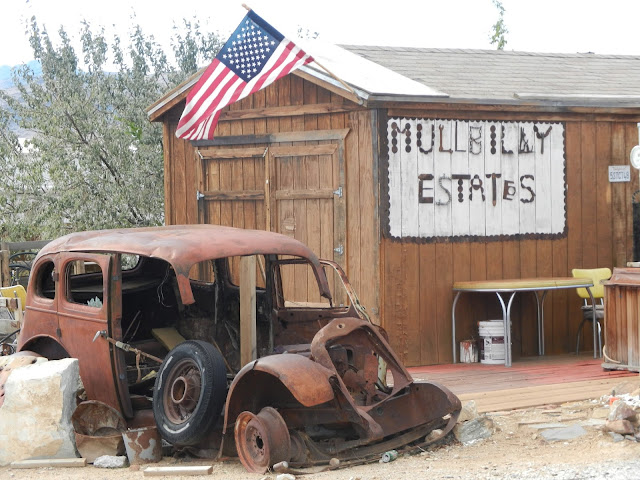 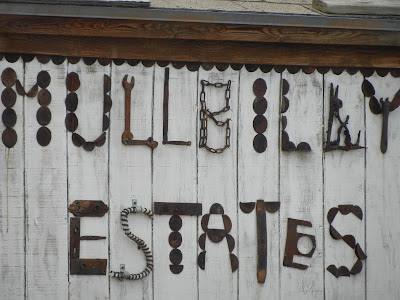 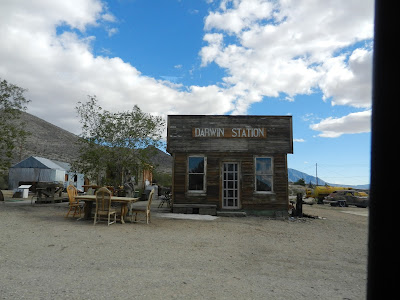 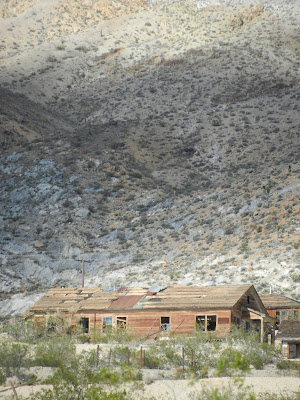 We played ugly tourist long enough and still had one more stop on our "hike" so we left Darwin to itself and went looking for Dirty Socks Hot Springs. 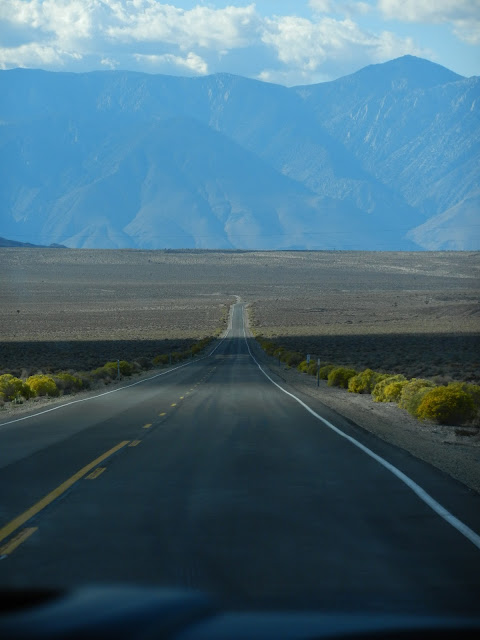 We found it, down a dirt road not too far from the paved road.    There were a couple bodies of water, they looked like small ponds.    One had a number of Coots and ducks swimming around and the other one looked more man made. 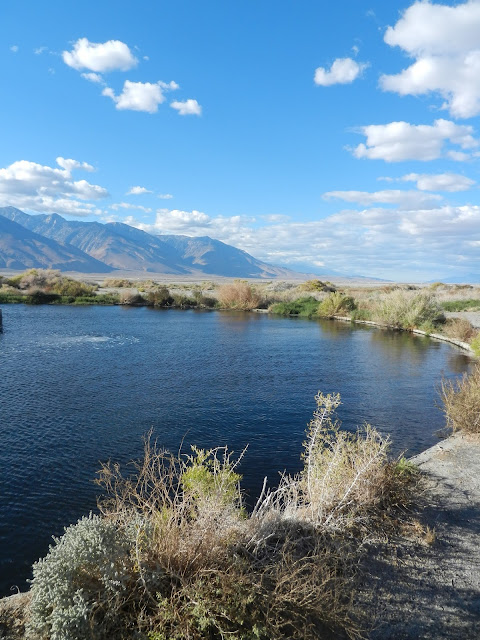 There was a truck and fifth wheel trailer parked beside it,    Pam and I got out to investigate the pool, to see if it was Dirty Sock Hot Spring.   The wind was so strong we could barely walk upright but we made it halfway around the pool.
When we got to a spot where the wind was blowing directly across the water we were absolutely positive that we'd found Dirty Sock Hot Spring......that is exactly what it smelled like! 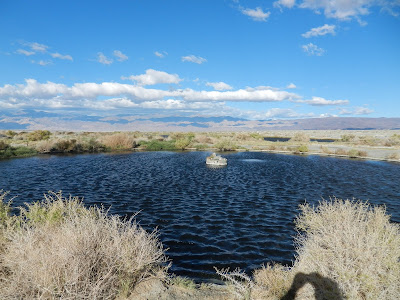 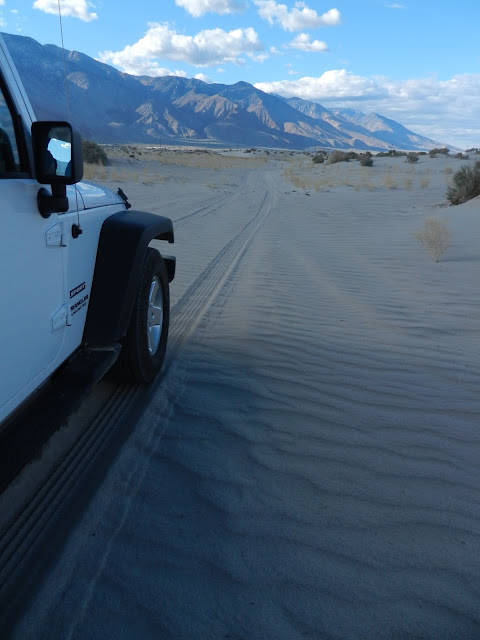 Just past the hot springs we noticed a fairly large area of white sand dunes in the distance so John quickly turned off the main road and drove back through the sand into the dunes until we realized that there wasn't anything else out there to see but sand......

We decided to call it a day without making our final stop, the Cottonwood Charcoal Kilns.     We know where they are now, we'll include them on future tours.....

I can hardly believe our good fortune to be able to drive around with good friends, turning this way and that way on a whim.      Finding sometimes interesting, sometimes beautiful, sometimes quirky things at every turn.    How fun is that!