Today, Saturday, we stayed home.   We both are on extreme sensory overload and needed some time to just think back and rerun our time here in the Mono Basin and surrounding area.    Also, we had some domestic duties to attend to and I was able to make a last minute appointment with Mr. David's Mobile Grooming and Beauty Salon.

Pam and John also took today to slow down and Dave and I (the dogs too!)  just got back from enjoying  Pam's delicious Paella at their house.     It is terrifically windy tonight, it was all we could do to stay upright walking back to Beluga.  Chairs knocked over, ex pen down and tree branches everywhere.    Accuweather and weather.com tell us that the wind is blowing at 7 mph......??

Yesterday we all went into Yosemite's  less traveled eastern entrance via Tioga Pass on Hwy. 120.     The Wright's left earlier than we did, they had a few big hikes planned.    Pam suggested a short, wooded, lakeside hike for us so Tenaya Lake became our destination.

The drive over Tioga Pass was as spectacular as any in the Park itself.   Yes, it was another "shelf" road as I've come to call them, but we were traveling on the inside lane so I could relax and enjoy the magnificent views. 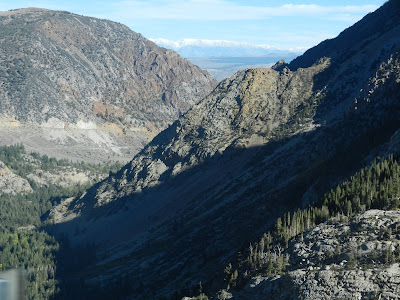 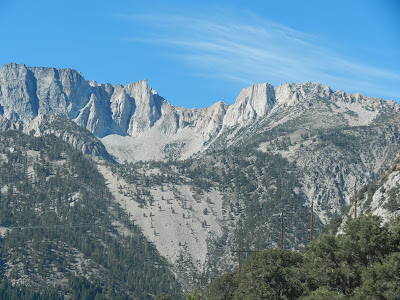 We entered the Park at the 9945 ft. Tioga Pass entrance and once again tipped our hat to whoever decided to issue Senior Interagency Passes to us geezers for $10, lifetime use at any National Park or facility.   Deals like that just don't happen very often and we are forever grateful.

Our first stop was Lembert Dome, a granite dome rock formation soaring 800 feet above the Tuolumne Meadow and River.  Wow!   Its smooth, pale gray granite skirt came right to the edge of the road.    We got out and hiked up a bit until it became very steep 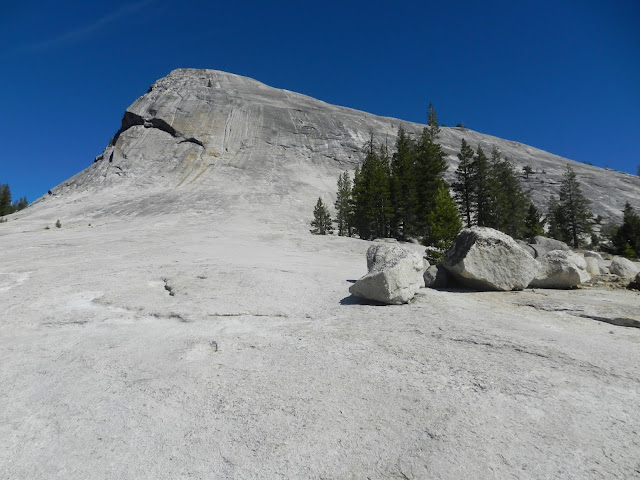 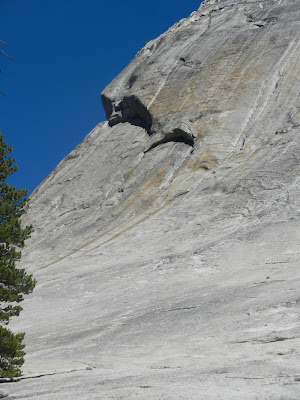 I find it frustratingly impossible to show you the scale of some things we're seeing.  I'm not good enough with my little point and shoot to know how to do it properly, grrr.    The vistas are never ending, the heights so very high, the valleys so very far away, the mountains and rock formations are huge - HUGE.

We have been to Yosemite  (from the west side, Yosemite Valley area) a few times and have seen Half Dome.    A light bulb came on when I saw Lembert Dome....Half Dome isn't just the rock formation's name, it is literally half a dome - duh!

As we continued along our way to lunch and  hike, we stopped in Tuolumne Meadows to look back at Lembert Dome from a distance. 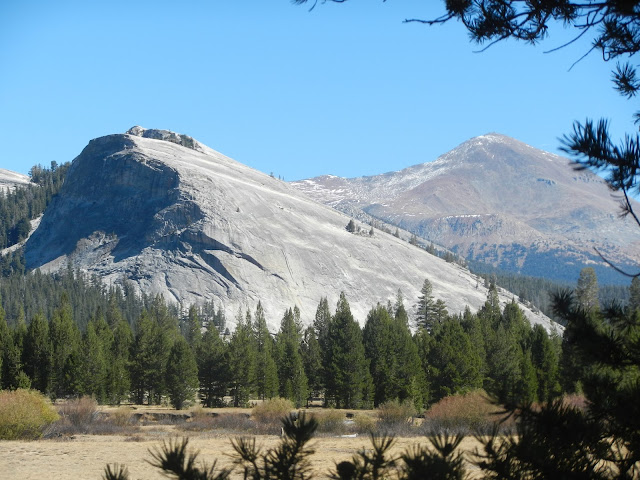 As we stood there, gawking, this big guy came trotting across the meadow.   I'm always awed by a coyote's smooth, ground covering gait, it looks effortless. 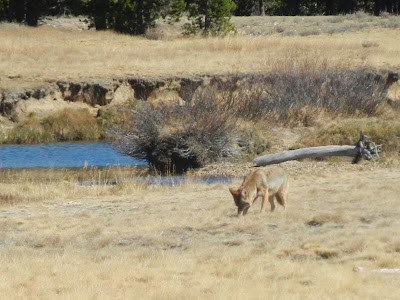 He stopped to eat something on the ground, then continued his path, turning and coming right at us. 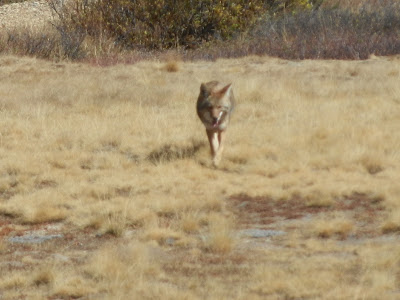 This picture is fairly out of focus as he was getting very close and showed no signs of changing directions.    He obviously had somewhere to go, so we let him be and continued on our way. 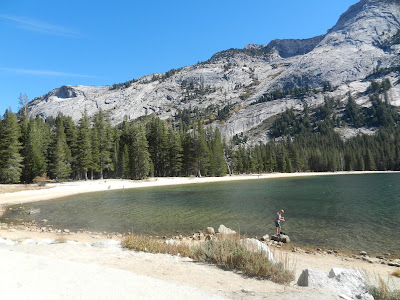 We rounded a corner and there was Tenaya Lake.   It was noon and we were ready for our lunch and a walk in the woods.   There were a few people around, but we had the beach totally to ourselves. 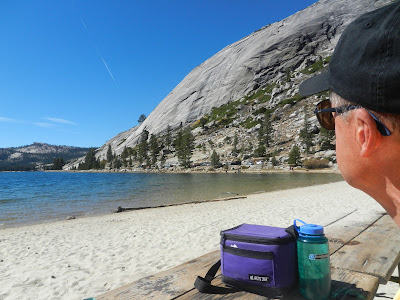 We ate our sandwiches in the bright sun and amused ourselves watching rock climbers scaling the dome across the lake. 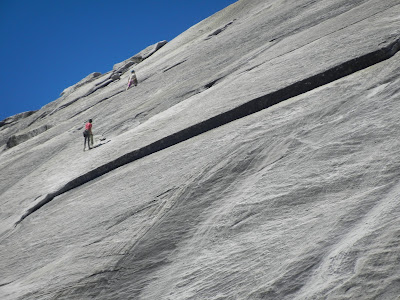 After lunch Dave went back to the car to exchange our "beach" shoes (think water walking shoes) for some more suitable for woods walking. 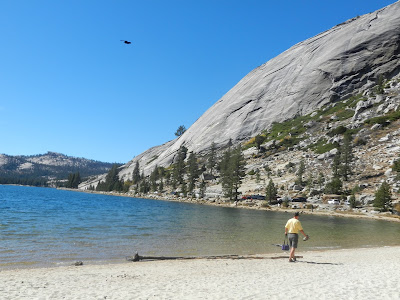 We walked along the shore in deep, coarse sand until we picked up the trail that would take us through the shady woods on the far side of the lake. 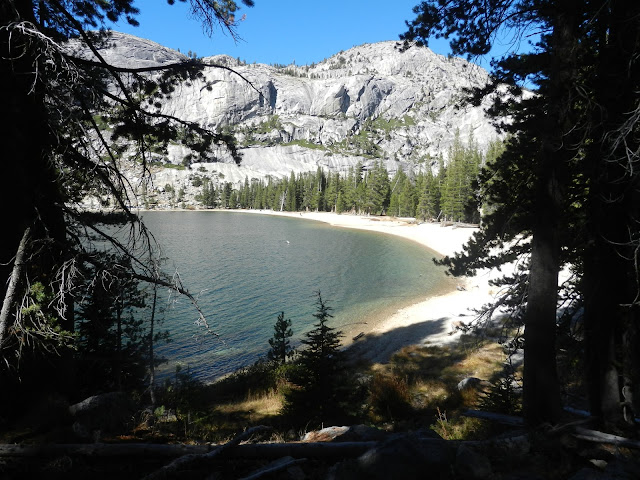 It was a lovely, gentile hike.    We walked in and out of bright sun on soft pine needles and large rocks.   There were places where we could get back down to the shore line, which you know we did... 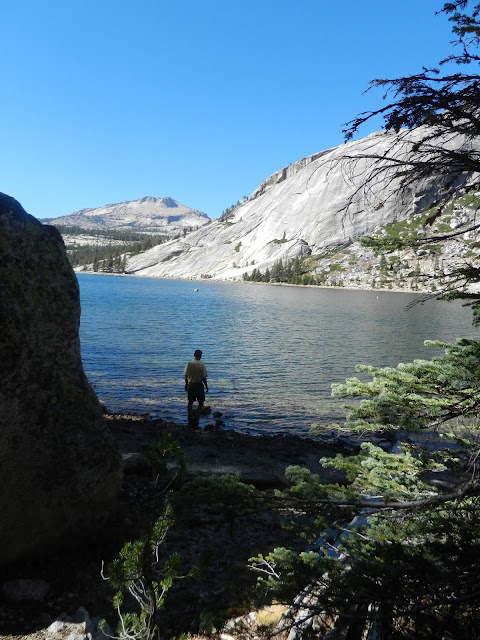 Sometimes we stopped and sat on boulders, just listening to the silence, or to the occasional woodpecker or nutcracker in the pines high over heads. 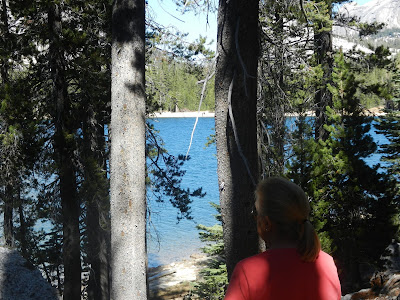 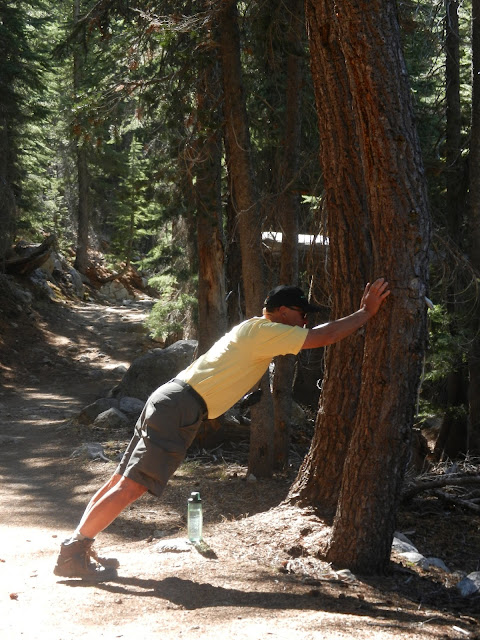 We didn't complete the entire lake loop because it would have had us coming around the other side of the water along the road.    Our walk had been so quiet and serene that we just turned around and took the same trail back to the beach. 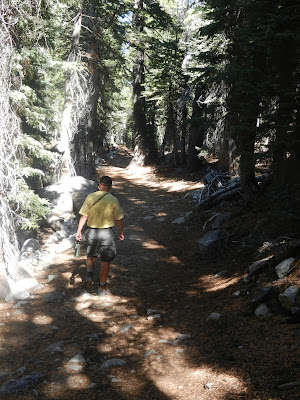 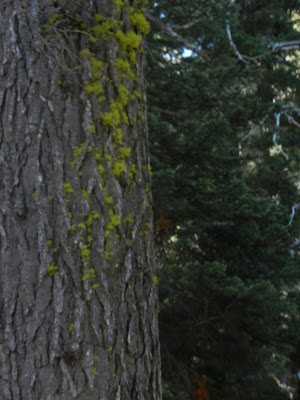 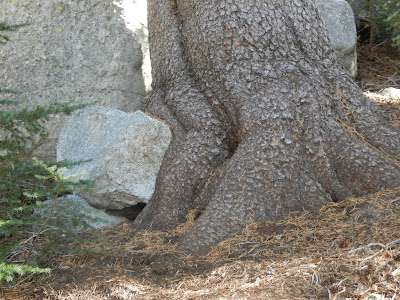 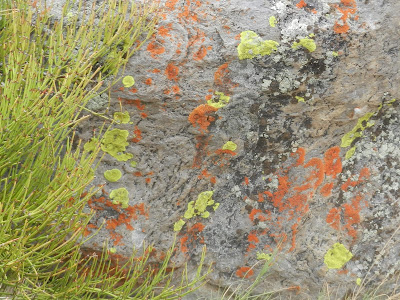 After returning to the car we realized it was getting late so we just drove a few more miles into the Park before turning around and heading home.   We were rewarded with more interesting rock formations and fantastic views. 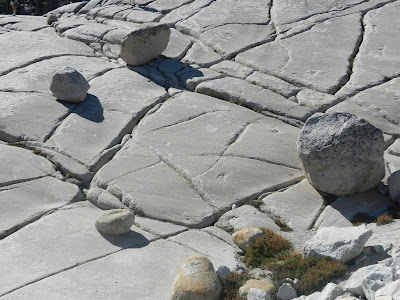 The power and the wonder of it all overwhelms us.